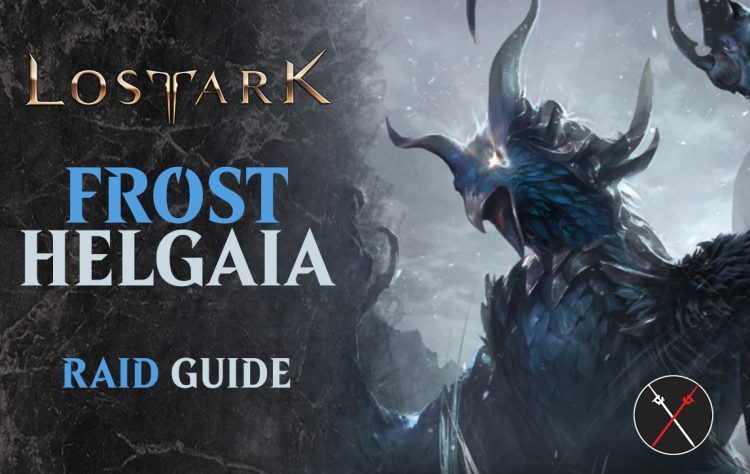 After honing your gear sufficiently, you will reach Item Level 960, which will allow you to fight the first Level 4 Guardian Raid boss in Lost Ark. Defeating Frost Helgaia will reward you with higher-tiered Epic Accessories, a Legendary Ability Stone, and honing materials, to name a few. 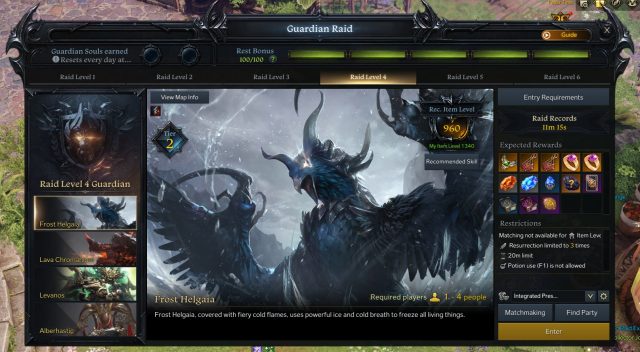 For these types of activities, it is important to allocate the right Tripods for your Skills. Since this Guardian is very weak against Lightning, you will want to select Tripods that ought to change the element of your damage if possible. Doing so will significantly improve the amount of harm you inflict. Next, you are going to want to equip HP Potions or those that restore a percentage of your HP since they are the only ones allowed in Guardian Raids. Alongside this are Flares, which are essential to immediately identify his location.

Frost Helgaia has similar move sets to Helgaia, allowing him to deal great damage. He even utilizes the Evolve Mechanic, much like his brother. This means that the fight transitions into 3 phases where new and enhanced skills are introduced in every stage. What’s more is that since Frost Helgaia inflicts the Frozen Status Effect, you will have to bring Panaceas. Panaceas will cleanse the debuff’s respective stacks to allow the players’ Movement Speed to return to normal. This is important since it can stack up to 10x, which at this point will momentarily freeze you, leaving you vulnerable to taking massive damage. 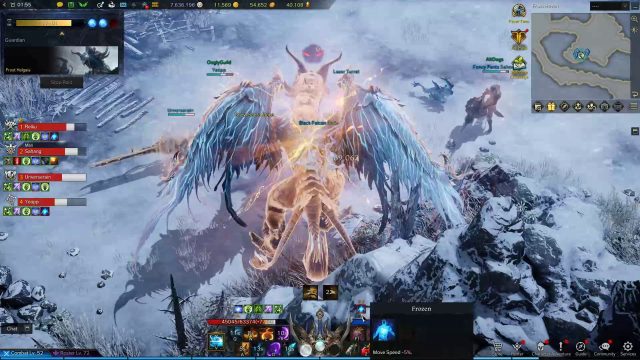 Additionally, you should also bring Whirlwind Grenades because like Helgaia, Frost Helgaia is weak against Stagger Damage, which is primarily used to interrupt his evolution from one phase to the next. It also incapacitates the Boss, allowing you and your allies to bombard him with potent abilities.

Frost Helgaia becomes a tougher boss to deal with, especially after transformation. The higher the phase, the faster and stronger his skills become. By default, this Guardian starts in Phase 1 where his abilities are pretty basic and quite similar to Helgaia. A few minutes into the fight, Frost Helgaia will attempt to transition to Phase 2. He will do this by flapping his wings 2x with his head facing the ground. 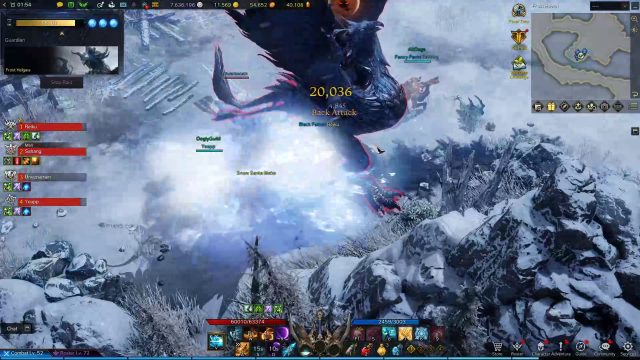 This move will then be followed by the sudden raising of both wings and his entire body, which are pointed towards the sky. Here, he is already charging up for the evolution. Additionally, you will hear a howl and see random ice storms on the ground. His wings will then exhibit flamboyant streaks of blue, signaling the start of Phase 2.

Remember to activate skills that provide Mid to High Stagger Damage and use Whirlwind Grenades to delay Frost Helgaia’s evolution. Should you fail to do so, he will release a huge and deadly gust of wind that deals massive damage. In fact, it can one-shot Classes with low HP such as the Sorceress and Glaivier. After hitting Phase 2, he will constantly attempt to reach Phase 3 so be prepared to bombard him with Stagger Damage. 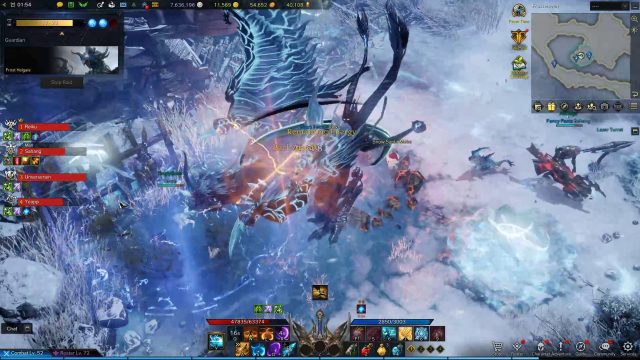 Your goal should be to postpone this boss’s eventual evolution into Phase 3, which would make his wings glow blue, introduce more potent skills, and significantly amplify the damage of his remaining abilities. He also becomes tankier and harder to kill plus, you accumulate stacks of the Frozen Debuff more quickly than ever before. Note, however, that after every successful stagger check, the Stagger Damage requirement becomes higher each time so Frost Helgaia will eventually reach Phase 3. Do not move away from the AoE even if there is an impending attack since you and your allies may be able to successfully impair the boss.

Moreover, you can stagger him in Phase 3 of the fight. Doing so will force Frost Helgaia to return to Phase 1, making the encounter much more manageable. A good indicator of this is when he plops to the ground and his wings are no longer glowing. However, he will make attempts to evolve once again. In the next sections of this guide, we’re going to discuss the different attack patterns of Frost Helgaia for every stage of the encounter.

Like the majority of bosses, Frost Helgaia will suddenly generate a blue aura around his entire body after raising his wings to charge at whoever is in front of him. Note that the period between changing colors and charging forward happens quickly so you have to be prepared to sidestep to avoid the attack. Frost Helgaia is quick and if you get crushed, you will be knocked down. 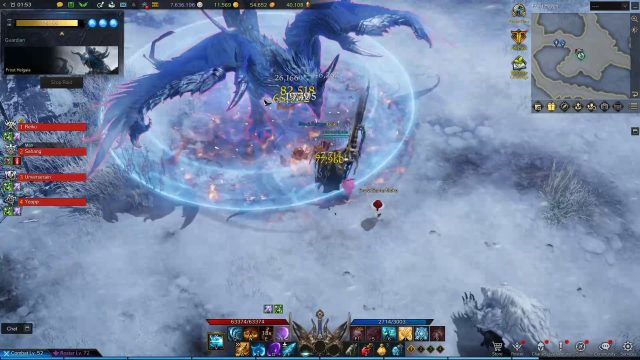 Remember to let the skill’s animation end first before approaching him, otherwise, you may be knocked up when he ducks his head and immediately lifts it afterward. If you manage to combat this move with a Counter Skill, he will be staggered, which would allow you and your allies to hit him hard for the time being. 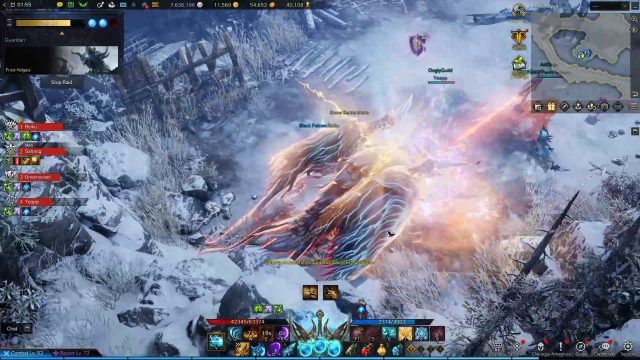 Additionally, this Guardian can also rush forward without glowing blue. At which point, no one from your team should use a Counter Skill to stop him. He will simply turn towards you to knock you down and deal low to moderate damage.

Once you see Frost Helgaia seemingly standing in place, you have to prepare for his peck attack. Here, he ducks his head and then proceeds to forcefully dig his beak twice into whoever is in front of him. This type of skill happens 2x in quick succession so before he performs the first move, remember to run to the side to avoid being impaired. 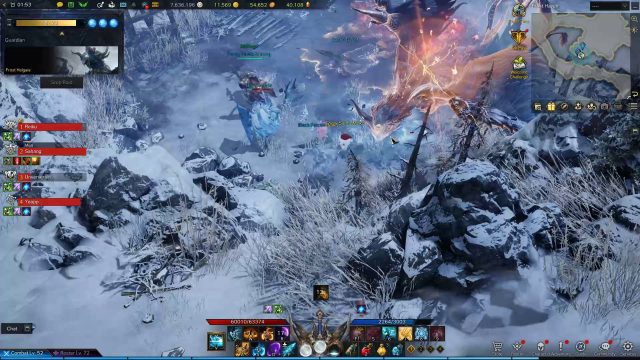 When the boss rotates his body sideways, he is about to hit you with one of his wings. Note that the direction of where he turns corresponds to the wing that will attack you. It is a powerful skill because on hit, affected players are flung away from him while taking moderate damage and receiving the Frozen Debuff. Those who are always positioned in front of him should therefore be cautious of this attack. To avoid it entirely, be sure to dash towards his back beforehand. 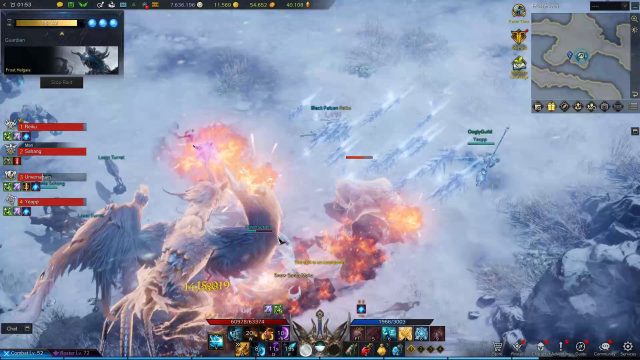 In addition to the wing swipe, Frost Helgaia also executes a wing strike to attack players who are hitting him from the side. What he will do is use one of his wings to seemingly shield his head only to perform the strike with the same wing. On hit, you are pushed back.

Next, Frost Helgaia does a move where he ducks his head midway to the ground with his wings pointing to the sky. This will be immediately followed by a head fling so anyone who is near him at the front will not only take low damage but also be thrown backward. Make sure to run to the side the moment you see him ducking to protect yourself from the attack. 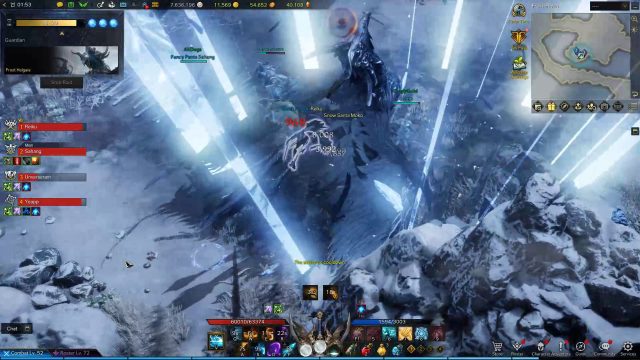 Similar to this Guardian’s wing attacks, he has the ability to perform a tail swipe. While you are actively hitting Frost Helgaia from behind, he will look at you from the side. This will then be followed by a tail swipe in the same direction. On hit, you receive damage as well as the Frozen Debuff. 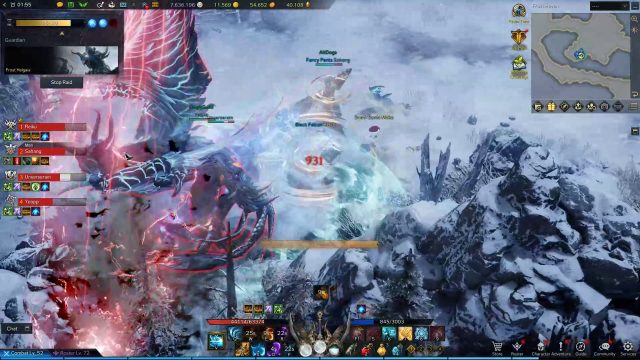 During Phase 2 and Phase 3, remember that the encounter against Frost Helgaia will still feature the skills I have talked about in Phase 1 where some of them will be stronger than before. Additionally, there will be new skills in the fight.

One of the first skills Frost Helgaia hits you with when Phase 2 starts is the wing swipe 2.0. Here, he initially swipes the party using his right wing. Once you have gone back on your feet, be sure to dash towards the same right wing to steer clear of the left wing. Because as soon as possible, he will also attack you with the latter in the same AoE pattern as before. Note that he can also opt not to swipe with his other wing if there are no targets in front of him. 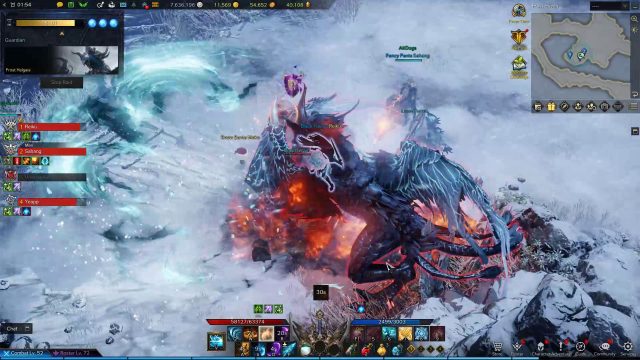 Frost Helgaia will flap his wings and rise above you. Rather than flying around, he will stop in mid-air and then slam directly into the ground. Slam is a fast and instant attack so when you see him ascending vertically, remember to dodge away from him, either in front or at the back. I don’t advise dashing to the side since you might get caught under his long wings. 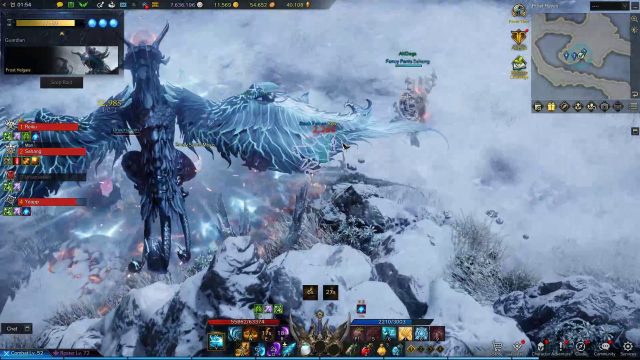 Due to the skill’s large AoE, you can easily get hit by his wings as he goes down. This results in taking damage and getting knocked down together with receiving one stack of Frozen Debuff. It is also important to remember that the boss can perform slam 2x. In Phase 3, it becomes tougher to evade due to how fast the skill animation is.

In the middle of attacking this Guardian, he will suddenly fly away. If your hits against him are not ‘Invincible’, he will not teleport to another area. Instead, he is preparing to unleash his devastating blizzard ability. After a few seconds of disappearing into the sky, you will see Frost Helgaia hovering above the same region he initially flew away from. 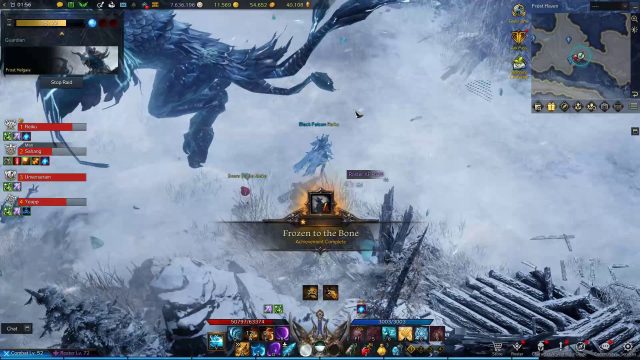 He will continually flap his wings to conjure multiple gusts of wind, which will eventually inflict the Curse of Frost Status Effect to freeze you so do not approach him. This move will then be followed by a devastating slam, which can kill squishy classes.

Like Helgaia, Frost Helgaia can charge straight at you even when he is flying, which makes it more challenging to counterattack. Instead, you can run towards the side to evade it altogether.

Wing swipe doesn’t end with two consecutive hits because in Phase 3, this boss can follow through with another devastating attack by slamming both wings together to crush whoever is in front of him. The likelihood of harming them is high given Frost Helgaia’s long wings. After the initial swipe, the party should dash towards his tail to reduce the chances of executing wing swipe 3.0. 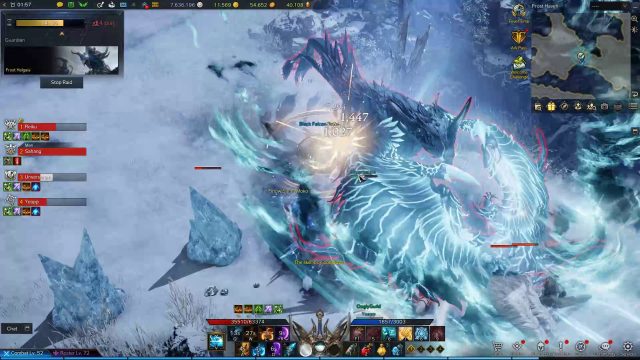 Frost Helgaia has similar skills as Helgaia, but between the two, the latter boss is harder to deal with. This is due to his Burn Debuff, which inflicts damage over time. However, this by no means diminishes the harm dealt by Frost Helgaia who can freeze you the moment the Frozen Debuff reaches 10 stacks. As such, you have to use Panaceas beforehand. 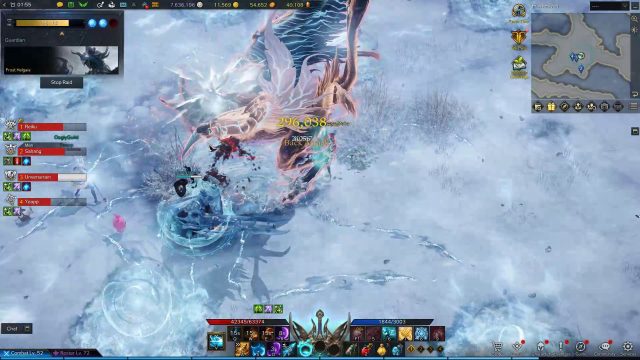 Remember to also attack this Guardian with Stagger Damage using Stagger Skills and Whirlwind Grenades when he is in the middle of evolving since he is stationary at that point. Doing so will further delay his transformation, making the encounter easier to deal with. Once effectively impaired, the party can proceed to pound him with other potent abilities.

Stay tuned for more Lost Ark Boss and Endgame Guides and be sure to check out our Lost Ark Wiki or drop by our Twitch Channel if you have questions about the game. You can also check out our recent endgame content including the Helgaia and Achates Boss Guides, Gold Farm Guide, Silver Farm Guide, and Best Combat Engravings. We also have Build Guides for the Destroyer, Glaivier, and Soulfist, to name a few. What did you think of this Lost Ark Frost Helgaia Guardian Raid Boss Guide? Which bosses are giving you a hard time? Let us know in the comments below!