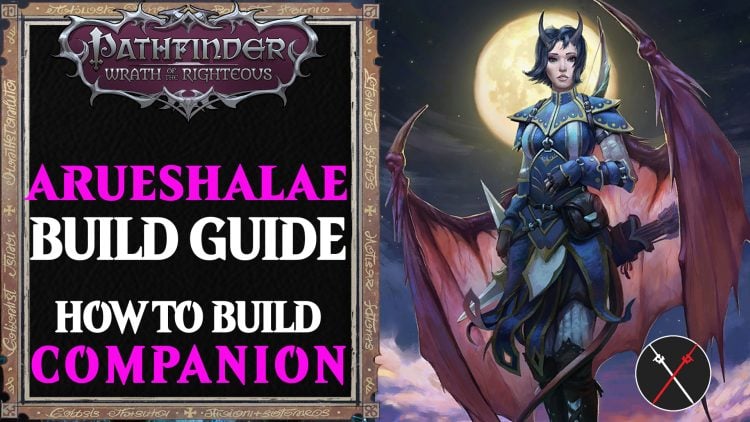 Arueshalae Build Pathfinder Wrath of the Righteous Guide – In this Arueshalae Build Guide, I’m going to break down the Attributes, Skills, Feats, Favored Enemy, Favored Terrain, Spells, Mythic Path, and Equipment you should choose to make Arueshalae’s Espionage Expert Ranger Subclass as effective as possible. If you’re looking for a way to deal huge Ranged Damage from afar, then this beginner-friendly Arueshalae Build Guide is for you!

Among the Companions you’ll be meeting at higher levels, Arueshalae has one of the best Attributes Spread from the get go. She has high Dexterity and Charisma, which you’ll utilize for Attack Rolls together with Spellcasting due to her Espionage Expert Archetype. Although she can only execute 5 attacks per turn compared to Lann’s 6-7 attacks, she’s able to deal Sneak Attack Damage thanks to her Sense Vitals Spell. Aside from her Ranged Attacks and Damage, Arueshalae has the ability to perform self-buffs to further improve her performance in Combat. 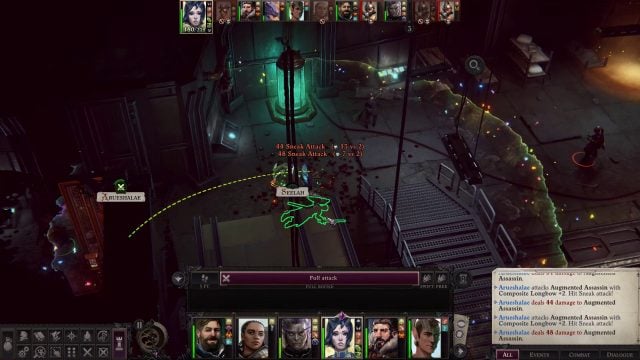 By the time you recruit her, she already has pertinent Feats that enhance Attack and Damage Rolls as well as overall damage. With Rapid Shot, the number of attacks you deal increases by 1, which uses your highest Attack Bonus, whereas for Deadly Aim, you receive additional Damage Roll Bonuses. The caveat of these however, is that your Attack Rolls suffer from penalties, making it tougher to hit enemies in succession. This is one of the reasons why we’ll continue to increase Dexterity despite starting with a high base value.

Additionally, you have Precise Shot, Clustered Shots, and Manyshot. Precise Shot negates the Attack Roll penalty you supposedly receive when attacking a target engaged in Melee Combat. Clustered Shots greatly boosts the damage you inflict when making a Full Attack since all of the damage from your hits are added together before applying the enemy’s Damage Reduction (DR). 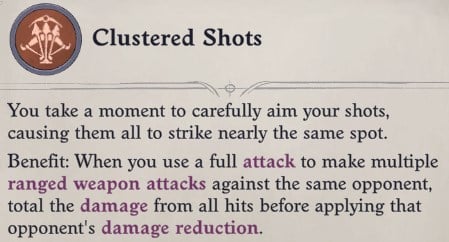 Finally, there’s Manyshot, which also requires you to make a Full Attack. It allows you to fire two arrows with your first attack. You then apply all of the Damage Bonuses you have such as the Strength Bonus from wielding a Composite Bow to each arrow. Moreover, any Sneak Attack and Critical Hit Damage are taken into account, albeit once. Note that both Precise Shot and Manyshot are Combat Style Feats, which don’t require you to fulfill prerequisites before you can obtain them. In later levels, you’ll be able to choose 3 additional Feats of this type.

Lastly, Arueshalae receives extra Attack and Damage Roll Bonuses against Favored Enemies like Demons and Humans that you’ll often encounter in Pathfinder Wrath of the Righteous. She can even share half of these bonuses with all Companions using Ranger’s Bond, as long as they’re standing within 30 feet of her. 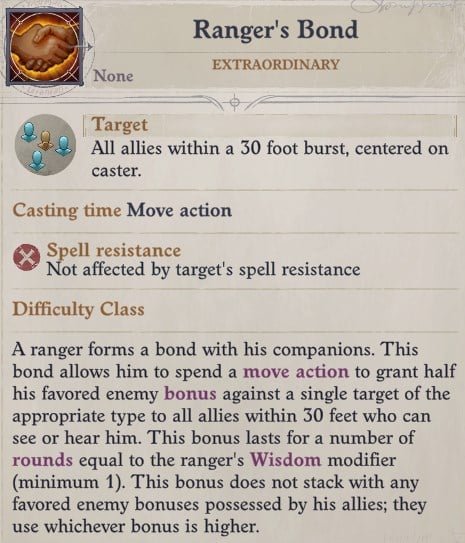 Starting at Level 12 and after every four levels, you’ll be able to add 1 point to any of your Attributes. With Arueshalae, you’ll raise two Attributes, namely Dexterity and Strength. Since your attacks, Armor Class (AC), and Reflex Saves rely on Dexterity, you want to invest 2 points into this at Levels 12 and 16 to attain a corresponding modifier of + 7. To make it more difficult for enemies to attack you by increasing AC, it’s best to equip Bracers of Armor. 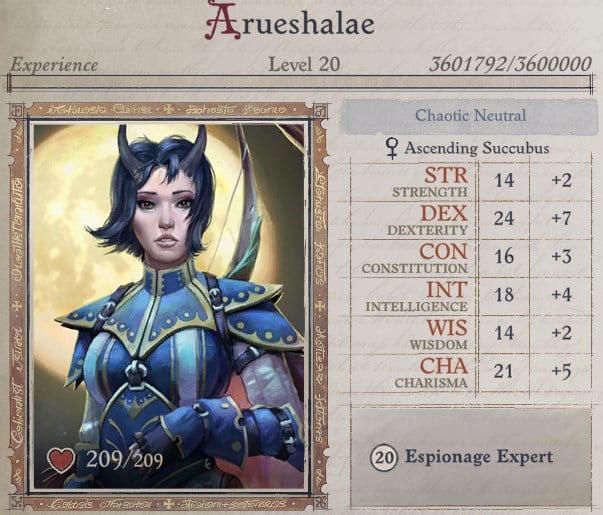 At Level 20, you’ll allocate 1 point into Strength to raise its modifier to +2. Strength is accounted for in Damage Rolls since you’ll be wielding a Composite Bow.

When it comes to Skills, you’ll want to enhance Mobility, Trickery, Stealth, Knowledge (Arcana), Perception, and Persuasion due to the bonuses you already have with these. Unlike the others, Arueshalae gets a ton of points every time she levels up. Mobility, Trickery and Stealth are Dexterity-based Skills. They help you move past targets without provoking Attacks of Opportunity, traverse difficult terrain with ease, disarm traps and unlock chests, and prevent random enemy encounters when the party is resting. 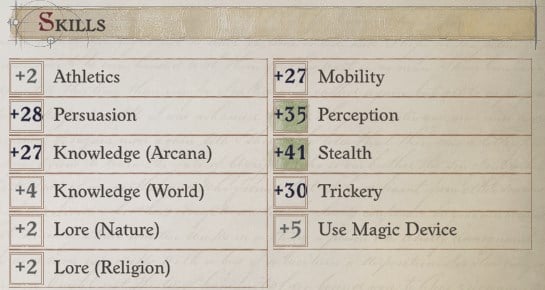 Meanwhile, Knowledge (Arcana) grants you a special ability to identify mysterious and magical objects, which may be rare Weapons and Armor. Perception heightens your sense of awareness towards your surroundings in case there are hidden traps or loot nearby. And Persuasion aids you in convincing others to what you want them to believe while providing extra XP.

From Levels 9 to 20, you’ll be able to choose 6 Regular Feats and 3 Combat Style Feats for Arueshalae. You’ll focus on acquiring those that improve your attacks together with the chances of performing Attacks of Opportunity and Critical Hits. 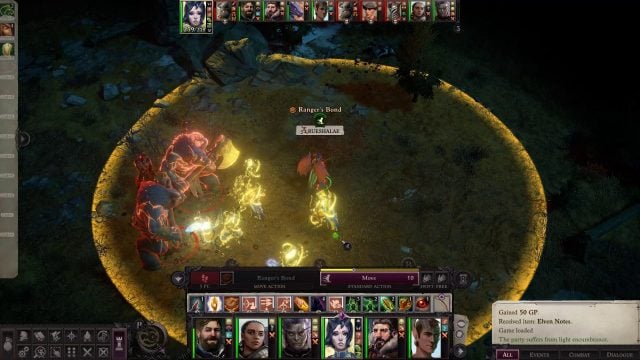 Here are the Feats that you ought to take in order since you need to fulfill Base Attack Bonus (BAB) requirements and other prerequisites beforehand:

The idea behind these Feats is to acquire Attack Roll Bonuses to counter the penalties you receive. You’ll then master Snap Shot related Feats, which improve the chances of executing Attacks of Opportunity due to your widening threat reach. Instead of raising the number of attacks you do, you’re able to trigger this type of attack more often.

With Greater Snap Shot, your threat area further increases and you receive massive bonuses to Damage Rolls and Critical Hit Confirmation Rolls. Additionally, with Point-Blank Master, you don’t goad enemies into executing Attacks of Opportunity against you when you perform Ranged Attacks. 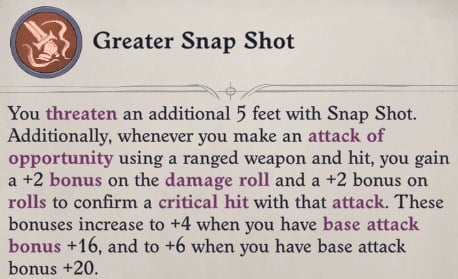 Next, you enhance the chances of consistently inflicting Critical Hit Damage with Improved Critical, Critical Focus, and Blinding Critical or another condition-dealing Critical Feat. Blinding Critical is a good Feat because it permanently blinds your target, thereby increasing their missed attacks against the party. Lastly, you ought to choose Improved Precise Shot, which allows your Ranged Attacks to completely ignore the target’s partial concealment as affected by Spells like Blur and Chameleon Stride. 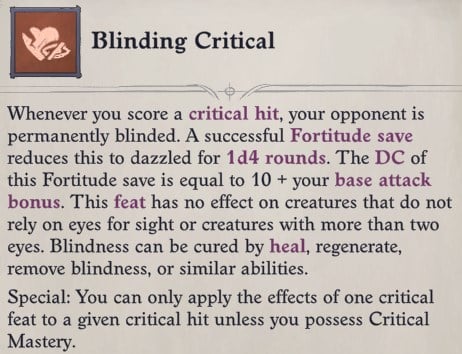 What makes Rangers very effective in combat are their Favored Enemy and Favored Terrain Class Features. Here are the enemies and terrain that Arueshalae should take in order:

Since you’ll be encountering demons all the time, it’s imperative to select Demons of Magic, Slaughter and Strength as your Favored Enemies. I’ve also chosen the Undead because there are a decent number of encounters against them as well. This Feature grants extra Attack and Damage Roll Bonuses when you deal with them. 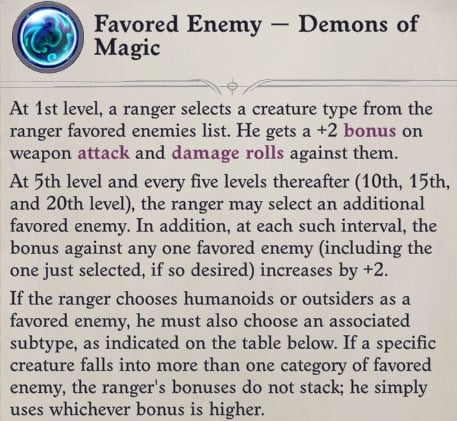 When it comes to Spells, your priority is to prepare the ones that provide Arueshalae with boosts to Attributes, Ranged Attacks and Damage, Critical Multiplier, AC and Saves to optimize her performance while keeping her alive in encounters. Specifically, these are Hurricane Bow, Aspect of the Falcon, Cat’s Grace, Barkskin, and Aspect of the Wolf, which you’ll have to apply beforehand. Remember that the Enhancement Bonuses of Cat’s Grace and Aspect of the Wolf don’t stack so make sure to cast one or the other. Either Spell raises Dexterity, thereby improving the chances of successfully hitting enemies. 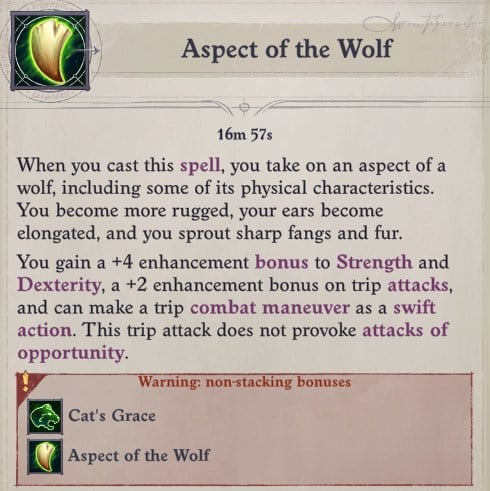 In addition to these personal buffs, you have Sense Vitals and Instant Enemy. Sense Vitals allows you to perform Sneak Attacks with the same 1d6 Precision Damage. This increases to a maximum of 5d6 worth of damage at Level 15. Instant Enemy, on the other hand, is a Swift Action that lets you treat a creature as if they were a Favored Enemy. For example, if you’re fighting against a Magical Beast and you cast Instant Enemy on it, you’ll reap the Attack and Damage Roll benefits when shooting arrows against it. Given that you only have a limited number of Favored Enemies, this Spell works well with your Companion Build. 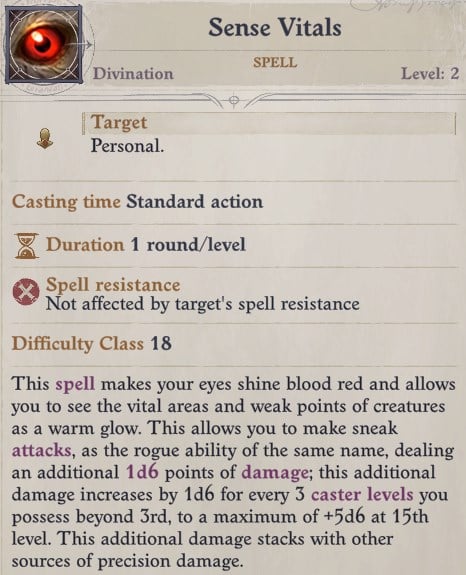 These Mythic Abilities improve both your Attack and Damage Rolls as well as the damage you deal when you inflict Critical Damage and Attacks of Opportunity. Meanwhile, Abundant Casting increases the number of Levels 1 to 3 Spells you’re able to cast and Distracting Shots penalizes the target’s AC as long as you hit them with your Longbow.

For Mythic Feats, you’re going to select the following:

In a similar manner, your attacks, damage and Critical Hits are significantly enhanced because of these Mythic Feats. As a result, your hits are more likely to land on targets since the penalties you take are much lesser. 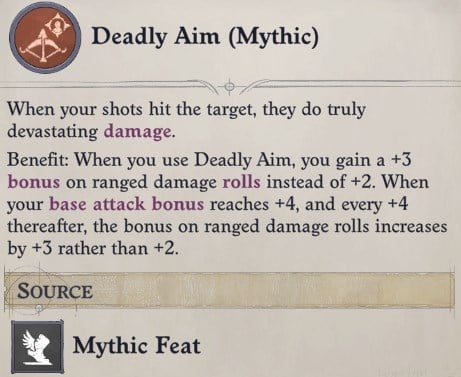 When it comes to Arueshalae’s Build, you can retain her default Bow, which is the Composite Longbow +2. As with the other Companions, you should remember to equip the Cloak of Resistance, Ring of Protection, and the Belt of Mighty Constitution, which increases your max HP. 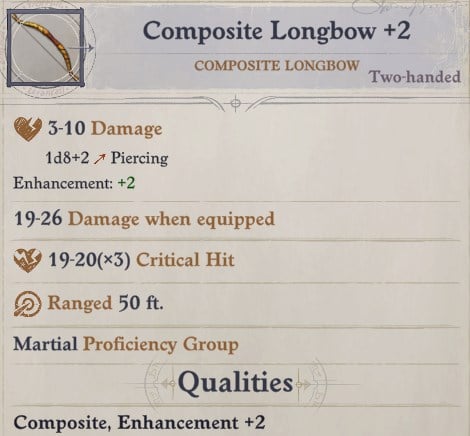 Even if you’re proficient with Light and Medium Armor, I wouldn’t recommend wearing one since it reduces your total AC. Wearing a Mithral Breastplate +2 as opposed to the Bracers of Armor +5 lessens AC by 1 regardless of the personal buffs you cast. As such, it’s better to wear the Bracer in place of Armor. 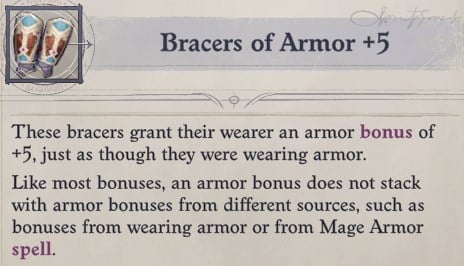 Additionally, you won’t be wearing the Amulet of Natural Armor either since it’s in conflict with Barkskin’s Enhancement Bonus. Note that this Spell provides more AC Bonuses than the Accessory.

Arueshalae is one of the best Companions you can recruit because of her consistently decent damage, which she’s able to deal from a safer distance. This is compounded even further thanks to the stacking benefits of Rapid Shot, Deadly Aim, and Manyshot. Moreover, due to Mythic Abilities and Feats, she’s able to reliably hit enemies because of the reduction to her Attack Roll penalties. 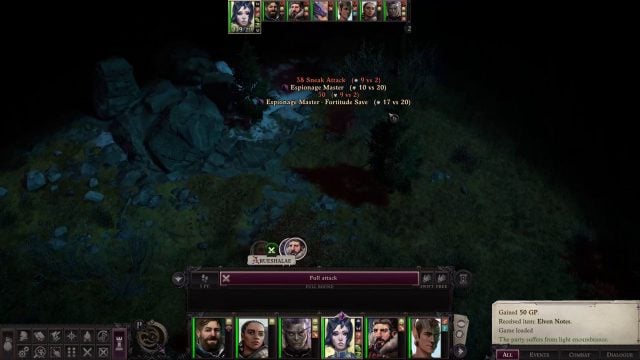 At Levels 9 and 11, you gain Evasion and Quarry. Evasion allows you to totally negate the damage you receive if you’re forced to roll a Reflex Save. Meanwhile, Quarry grants you additional Attack Roll Bonuses against your target. It also confirms the Critical Hits you’ve made. Remember to activate this Ability prior to the start of every encounter to enhance your attacks on the spot.

Lastly, make sure to equip the Headband of Alluring Charisma at Level 20 in order to raise your Charisma. At the same time, you’ll be gaining Espionage Master. Espionage Master is a Standard Action that determines whether or not you kill a Favored Enemy. If they succeed in their Fortitude Save, you deal damage normally using your Full Attack Bonus. 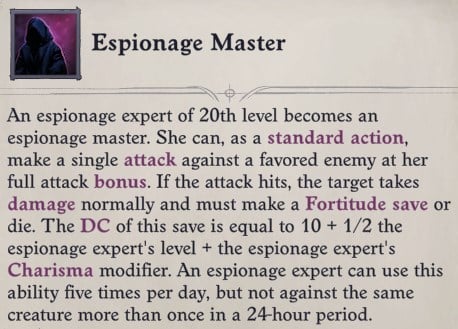 If the target fails, they die. So always activate it when you’re dealing with someone who has a low Fortitude Save. A higher Charisma Modifier means that this Ability’s DC is harder to resist.

Stay tuned for more of these Companion Build Guides and be sure to check our Twitch Channel or the Pathfinder: Wrath of the Righteous Wiki if you have questions on the game! Be sure to check out our other Pathfinder Wrath of the Righteous Guides like the Bloodrager Class, Arcanist Class, Cavalier Class, Top 5 Archer Builds, Best Class to Play, Greybor, Regill, Sosiel, Woljif, Daeran, Wenduag, Ember, Nenio, Lann, Seelah, Camellia, and Beginner’s Guide!