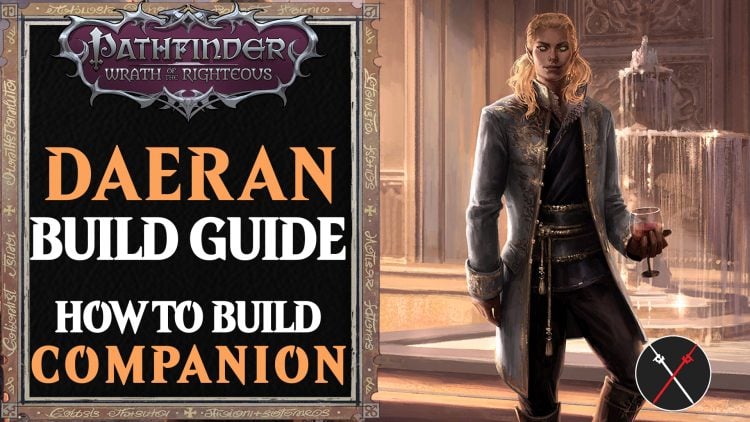 Daeran Build Pathfinder Wrath of the Righteous Guide – In this Daeran Build Guide, I’m going to break down the Attributes, Skills, Feats, Spells, Revelations, Mythic Path, and Equipment you should choose to make Daeran as effective as possible when it comes to healing and buffing the party. I’ll be showing a straightforward Oracle Build, which also deals damage with Ranged and AoE Spells on the side. If you’re looking for an excellent Support Companion that fits in any party composition, then this Daeran Build Guide is for you! 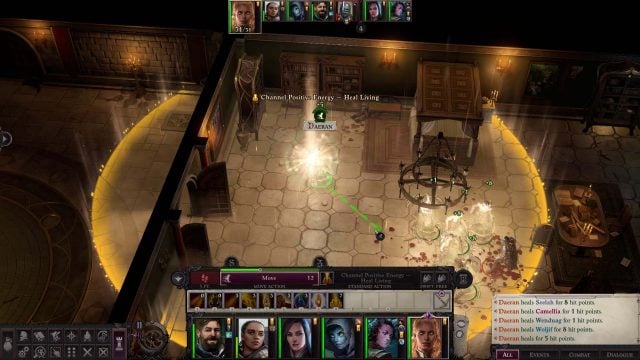 Daeran’s Build concentrates on being the most effective healer in Pathfinder Wrath of the Righteous. Because of his Life Mystery, he automatically gets a bunch of healing Spells and buffs from the moment you recruit him. 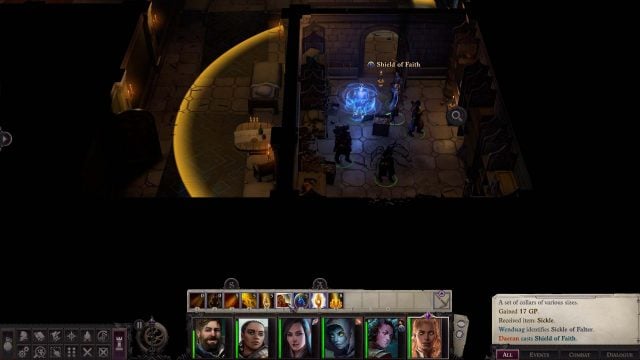 In times when you don’t need to support the party, you’ll be dealing damage with powerful Evocation Spells such as Fireball, Hellfire Ray, and Fire Storm, which you receive by equipping the Red Salamander Ring. Not only that but you also have a lot of other powerful Spells to remove status effects and to provide Spell Resistances, to name a few.

By the time you meet Daeran at Level 3, he automatically has the following Feats, Proficiencies and Abilities:

On top of these, Daeran also gains Uncanny Dodge and Powerless Prophecy. Uncanny Dodge provides you with immediate awareness at the beginning of an encounter. This means that you’re never flat-footed so you gain the full benefit of your Dexterity Bonus to Armor Class (AC). Your defenses are active all the time even when you’re facing invisible enemies. This does, however, make you vulnerable to being flanked. 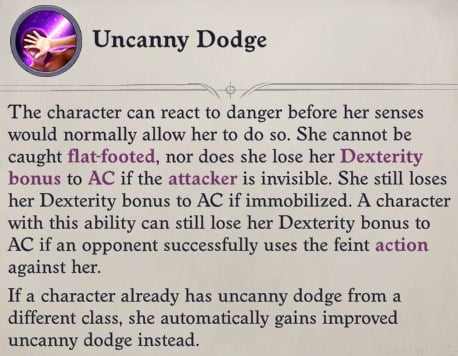 On the other hand, Powerless Prophecy is the side effect of Uncanny Dodge such that you’re automatically staggered during the first round of an encounter. As such, you’ll have to position Daeran at the center of the party to prevent him from using his Movement Action to reach and therefore buff everyone. This way, he can immediately cast a Spell at the start of combat.

At Levels 5, 10 and 15, you gain Insight Bonus on Initiative Checks, Improved Uncanny Dodge, and more Insight Bonus for AC and Saving Throws or Saves in the first round of combat, respectively. Improved Uncanny Dodge essentially makes you immune to being flanked so now, not only do you deny them of any bonuses they get for flanking but you’re also able to dodge Sneak Attacks as a result. This can only be countered by the enemy if their Rogue Level is 4 levels higher than Daeran’s.

Starting at Level 4 and after every four levels, you’ll be able to add 1 point to any of your Attributes. With Daeran, you’ll only improve two Attributes, namely Charisma and Constitution. Charisma is the Oracle’s Spellcasting Ability, which lets him learn and cast numerous Spells. 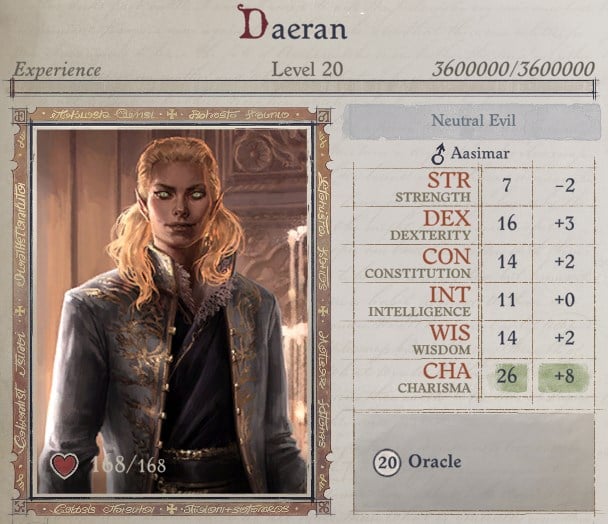 It’s corresponding modifier is added to the Spell’s Difficulty Class (DC). A higher Spell DC means that enemies will have a tougher time in negating or reducing the Spell’s impact. At Levels 4, 8, 12 and 16, you’ll be allocating 4 points into this Attribute, which is equivalent to 24 Charisma with a +7 modifier. I highly recommend equipping the Headband of Alluring Charisma to raise Charisma even further.

At Level 20, you ought to invest 1 point into Constitution, thereby increasing its modifier to +2. In order to grant yourself more HP,  you’ll have to wear the Belt of Mighty Constitution.

In terms of Daeran’s Skill, you’ll enhance Persuasion, Knowledge (Arcana), and Knowledge (World) since by default, you already gain bonuses to these. Persuasion convinces NPCs in dialogue and provides you with extra XP. 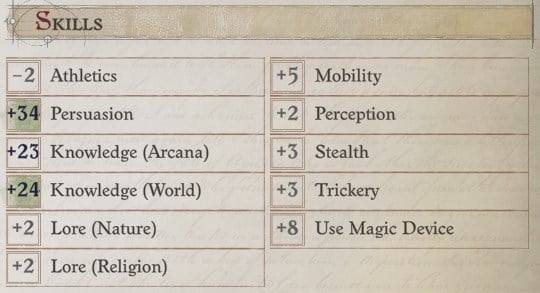 Knowledge (Arcana) helps you identify mysterious and rare objects, some of which are unique items in the form of powerful Weapons and Armor. On the other hand, Knowledge (World) enables you to recall lore about historical events and the like in order to uncover secrets when you’re exploring. It also allows you to successfully brew potions when setting up camp.

From Levels 5 to 20, you’ll be able to choose 8 Feats for Daeran with 1 Feat at every other level. You’ll focus on primarily healing the party, buffing them, removing harmful conditions, and dealing damage with Ranged Touch Attack or Ray Spells and AoE Spells. 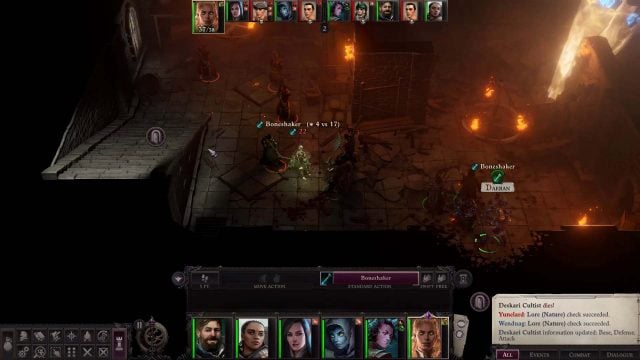 Starting at Level 5, you ought to take these important Feats in the following order: 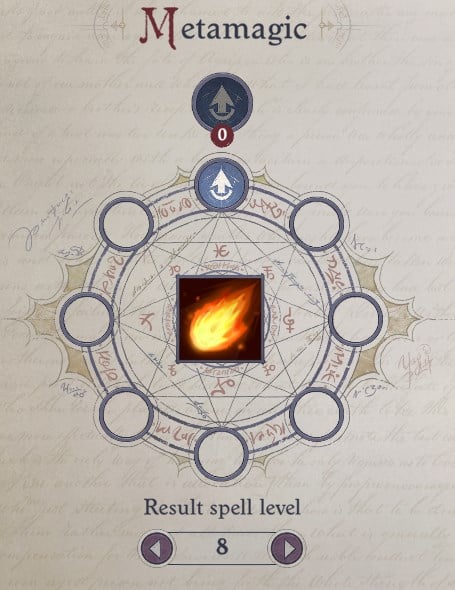 You can heighten Spells by going to Daeran’s Spellbook Tab and clicking ‘Metamagic’ at the bottom left-hand corner of the screen. Add a Spell in the middle square of the big circle by double-clicking on the icon or by dragging it. Click the “Sword Icon” on top of this and then select “Write spell” at the bottom.

Similar to the Witch Class, Oracles cast Spells spontaneously so it doesn’t require preparation. Your choice of Spells to use per level are therefore not limited by Spell Slots. However, in order to replenish it, you still have to take a rest.

With Daeran, you’re able to ensure that your party, no matter what the composition may be, survives each encounter. He has a lot of buffs and healing Spells, which are enough for everyone. When he’s not supporting his allies, he deals damage from afar using an array of effective Evocation Spells. It’s not as potent as say, Ember’s Spells, but these are definitely going to hit enemies hard. 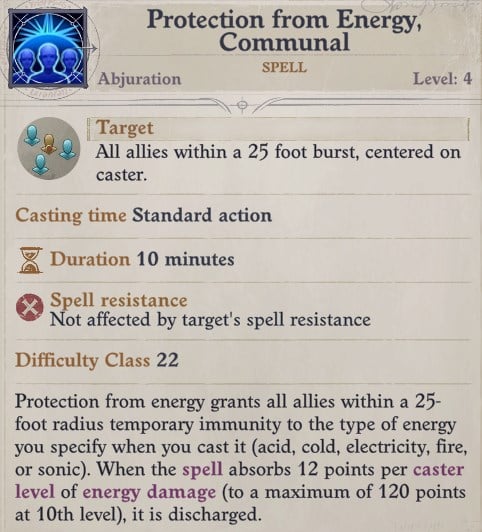 When it comes to Damage Spells, you’ll primarily cast Evocation Spells that deal Fire Damage. You automatically receive these from the Red Salamander Ring because you’re a spontaneous caster. The best AoE Spells are Fireball, Fire Snake, and Fire Storm since you’re able to severely damage multiple enemies at once. Meanwhile, you can also cast Hellfire Ray against a target. At Level 19, you hit them with a combination of 6 Fire and Unholy Power Rays. This is advantageous against enemies who are resistant to Fire Damage since you’re still able to inflict Unholy Power Damage effectively. 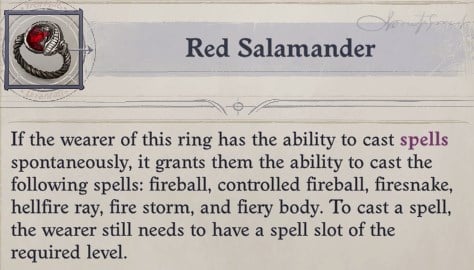 Additionally, you can choose from a list of damage Spells, which you gain every time you level up. Spells like Arrow of Law, Boneshaker, Holy Smite, Boneshatter and a lot more are available to this Class so feel free to experiment with them as well.

From Levels 7 to 19, Daeran receives secrets as a result of Revelation. These mysteries provide Oracles with additional bonuses based on their Caster Level. The idea is to first concentrate on healing allies as effectively as possible. As such, you should select the following in this order: 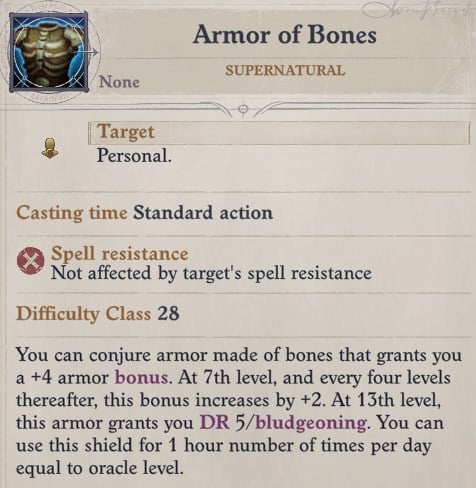 When it comes to Daeran’s Weapon, you don’t have to equip anything since you’ll be casting Spells all the time. Similar to the rest of the characters, you’ll need to equip the best versions of the Amulet of Natural Armor, Ring of Protection, and Cloak of Resistance to boost your defenses considering how low these are to begin with. As mentioned earlier, make sure to wear the upgraded version of the Belt of Mighty Constitution to increase your max HP.

In terms of Daeran’s Armor, you’ll be capitalizing on his Medium Armor Proficiency to get the most AC possible. However, you’re going to have to be selective with this since your Strength Score is very low. You can easily become encumbered if you wear Armor that’s quite heavy. When you do, you’ll receive a penalty on your Dexterity, thereby affecting your AC. One example of a good Medium Armor is the Mithral Breastplate +1 because it only weighs 15 lbs. 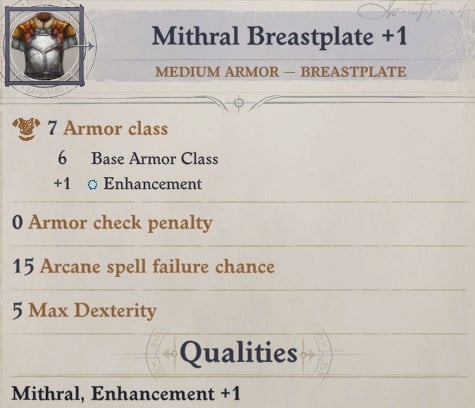 When you reach Level 19, you’ll no longer need to wear Medium Armor since you’ll be using Armor of Bones. Unfortunately, both provide the same Armor Bonuses, which don’t stack. Between the two, Armor of Bones provides you with higher AC. Just remember to activate it prior to the start of any encounter.

Compared to the other Spell Casters, Daeran has the simplest Support Build since you no longer need multiclassing to make him more effective at what he does. From the start, he gains a lot of healing Spells and buffs to help allies fight and defend themselves from different enemy types. You can even select the type of Damage Spells that works best for your playstyle since there are so many to choose from. 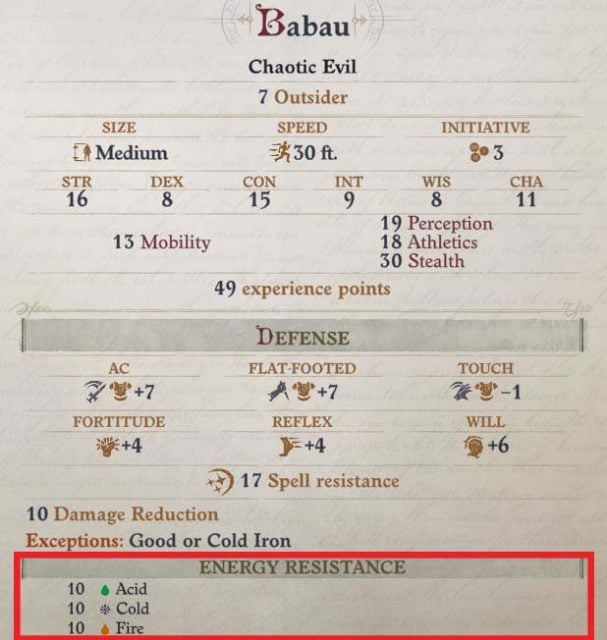 Be careful in casting AoE Spells when allies are nearby as they can easily get caught in the crossfire and die. For instance, with Fireball, you shouldn’t use it unless you’re able to clump enemies together in a single location so as to damage as many of them as possible. Lastly, you can use Cure Wounds offensively against the Undead since they receive the brunt of its damage if they fail their Will Saves.