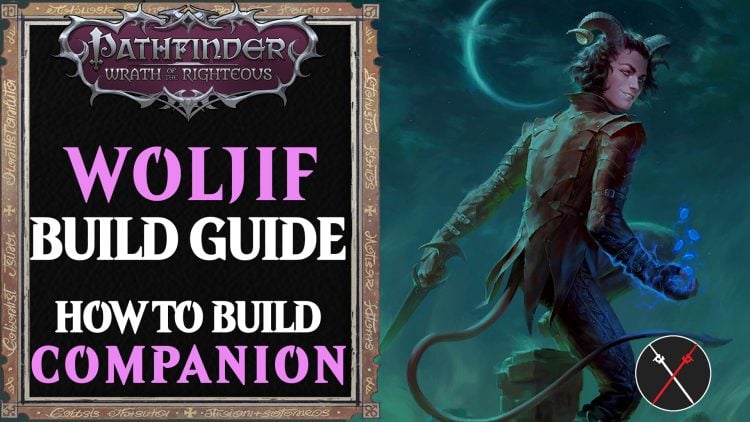 Woljif Build Pathfinder Wrath of the Righteous Guide – In this Woljif Build Guide, I’m going to break down the Archetype to multiclass with, Attributes, Skills, Feats, Medical Discoveries, Spells, Mythic Path, and Equipment you should choose in order to take advantage of Woljif’s Sneak Attacks. We’re going to multiclass with the Vivisectionist Alchemist to stack these attacks and to buff ourselves with Mutagens and Spells. If you’re looking for a way to efficiently eliminate enemies up close with a Dual Dagger Melee Build, then this Woljif Build Guide is for you!

By default, Woljif’s Eldritch Scoundrel Prestige Class is average at best. It aims to combine the best features of a Rogue and a Wizard, however, it isn’t very effective. You don’t get Sneak Attacks as often as you should and your Spell Slots per level are too limited. Your Armor Class (AC) or how difficult it is to hit you is also low to begin with, which means that you often need to be micromanaged just to stay alive in Combat. 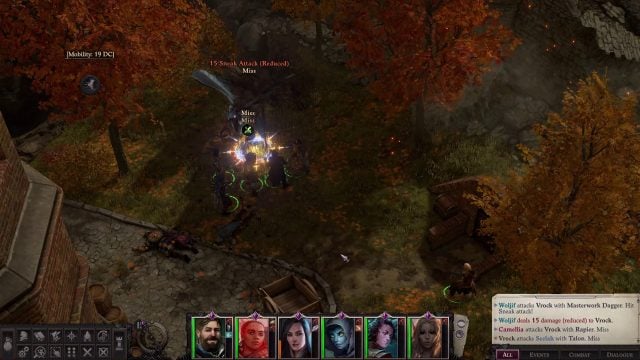 As such, we’re going to multiclass with the Vivisectionist Alchemist. Not only are you able to take Sneak Attacks at every other level, but you also gain access to Medical Discoveries. These provide you with Attribute and defense buffs, which can be activated prior to the start of an encounter. You also perform an additional Natural Attack on top of the Melee Attacks you execute with Daggers.

For this Build, we’re going to capitalize on the notable Rogue Eldritch Scoundrel Feats, Proficiencies and Abilities that you initially have. For instance, with Weapon Finesse and Finesse Training (Dagger), you apply your Dexterity Modifier instead of the Strength Modifier to all Melee Attack and Damage Rolls provided that you’re wielding Daggers. Because of this, we’ll be sticking with these Weapons. 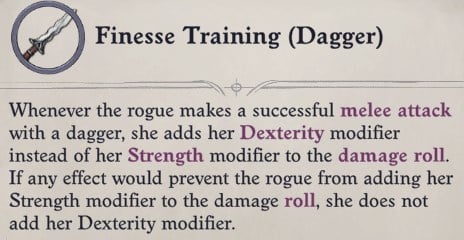 In general, wielding two Weapons gives us Attack Roll penalties for our Main Hand and Off-hand Attacks. This is where the Two-Weapon Fighting Feat comes in handy because it reduces those penalties. So despite wielding Daggers, your hit chances continue to be decent. You also have the Double Slice Feat, which adds your Strength Bonus to your Off-hand Weapon’s Damage Rolls. This becomes beneficial to us after drinking a Mutagen that buffs your Strength since your base Strength Modifier is 0.

You also have other essential Abilities such as Scribe Scrolls to successfully craft Scrolls together with another Spell Caster like Nenio, and Evasion. Evasion improves your defenses, specifically your Reflex Saving Throw or Saves. For instance, if you’re hit by a Spell that makes you roll a Reflex Save to reduce its damage by half, you instead take 0 damage. 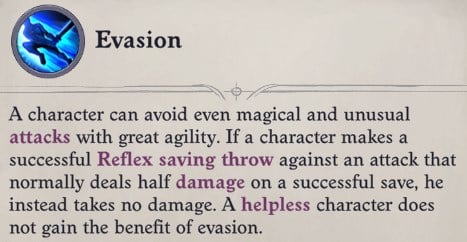 When multiclassing, remember to take 4 levels of the Rogue Eldritch Scoundrel Class. Since you meet Woljif when he’s at Level 3, you only need to invest in one last level in order to weaken your targets with Debilitating Injury. This Ability penalizes their AC, Attack Rolls or Speed every time you successfully inflict Sneak Attack Damage. Note that it needs to be activated before you attack. Additionally, you’ll also be able to select False Life and Mirror Image Level 2 Spells to improve your survivability in combat. These are vital since Woljif is the most prone ally to dying constantly. 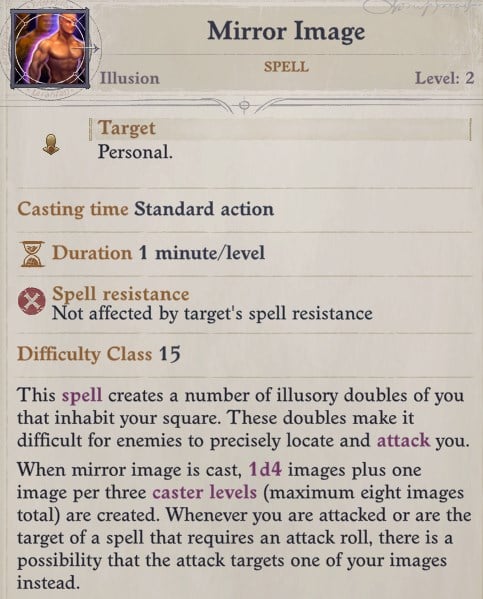 From Levels 5 to 20, you’ll want to multiclass with the Vivisectionist Alchemist primarily for the Sneak Attacks and Mutagen. What makes a Rogue unique compared to the other Classes is their ability to perform Sneak Attacks, which provide them with extra 1-6 or 1d6 Damage on top of their normal attacks when the enemy is flanked or denied their Dodge or Dexterity Bonus to AC. 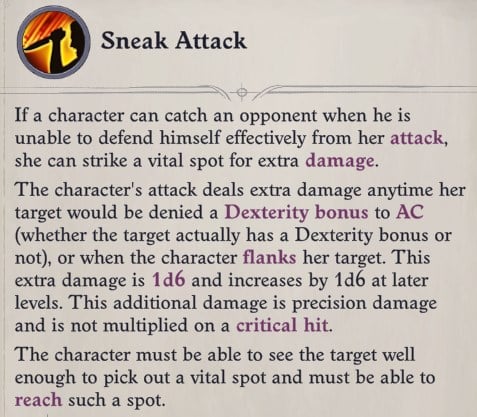 The Vivisectionist Alchemist Archetype generously provides us with this attack type at every other level, which stacks up to eight so that’s 8d6 worth of extra damage. From the Eldritch Scoundrel Class, you get 2 more Sneak Attacks for a total of 10d6 damage. Now these pair well with Weakening Wound to reduce your target’s Damage Reduction (DR), which the majority of demons in the game has.

On the other hand, Mutagens provide you with Natural Armor Bonus to AC as well as bonuses to Dexterity, Constitution and Strength, which you need since Woljif is initially a very squishy Companion. Your other Attributes such as Wisdom, Charisma and Intelligence, are penalized but it isn’t incremental so this is still a great tradeoff for the boosts you receive. Lastly, you also receive Poison Resistance and eventually, Poison Immunity when you reach Level 10.

Starting at Level 4 and after every four levels, you’ll be able to add 1 point to any of your Attributes. With Woljif, you’ll improve two Attributes, namely Dexterity and Constitution. The Dexterity Bonus you get not only increases your AC, but it also improves your Melee Attack and Damage Rolls. Because of this, you’ll want to allocate 4 points when you reach Levels 4, 8, 12 and 16. In total, you’ll get 24 Dexterity with a modifier of +7. 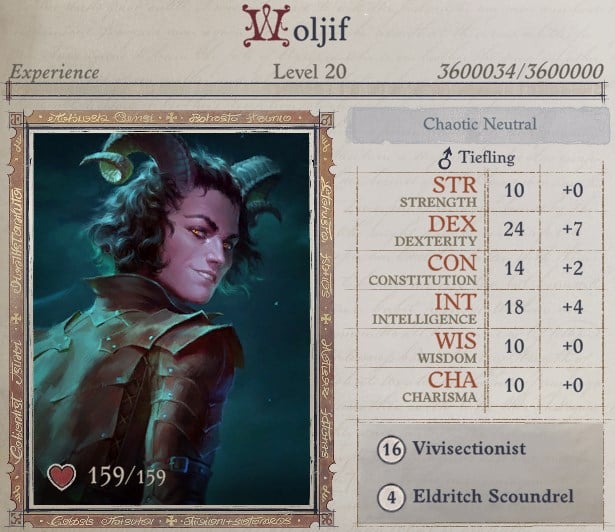 At Level 20, you can then invest 1 point into Constitution to enhance your max HP and Fortitude Saves. Your Constitution should increase to 14 with a modifier of +2.

Since Woljif has numerous Skill points per level, you can invest in Persuasion, Mobility, Trickery, Stealth and Perception. Persuasion is essential in order to successfully intimidate enemies after you activate the Dazzling Display Feat. Mobility helps you avoid Attacks of Opportunity when you move near them. It also lets you pass through difficult terrain and paths so you can progress in quests. 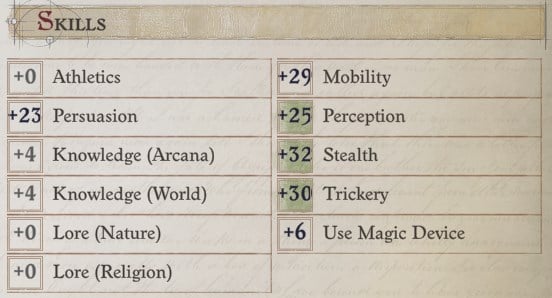 Next, Stealth allows you to sneak up on targets whereas Trickery is useful in disarming traps and opening chests, which are both predominant in the game. Lastly, Perception helps identify if there’s anything noteworthy or dangerous in the area and it prevents your party from being surprised while resting.

From Levels 5 to 19, you’ll be able to choose 8 Feats for Woljif with 1 Feat at every other level. You’ll focus on acquiring as many bonuses for your Damage Rolls as possible while improving the chances of making Critical Hits. In total, you’re able to hit enemies 7 times – 3 attacks per Dagger and 1 Bite Attack. You can use all of these as long as enemies are adjacent to one another. 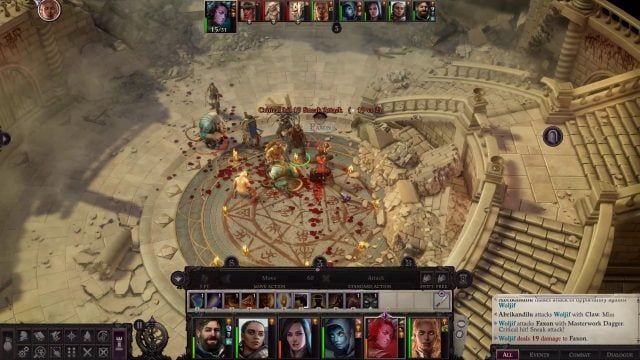 The idea behind these Feats is to immediately raise your AC with Dodge. You’ll then want to improve the chances of successfully hitting enemies with your Daggers and  actually damaging them hard enough with Weapon Focus (Dagger) and Piranha Strike. In order to proc Sneak Attacks, you’ll first need to activate Dazzling Display upon successfully making a Persuasion Check. Afterward, Shatter Defenses turns enemies flat-footed, making them vulnerable to Sneak Attacks and therefore, receiving massive damage. 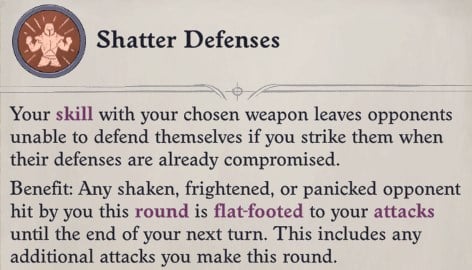 You’ll also notice that there’s the Greater Two-Weapon Fighting Feat, which increases the number of attacks you’re able to make with your Off-hand Weapon, albeit with a penalty. But this penalty isn’t too high that it becomes a hindrance to hit your targets. In order to access this Feat, you’ll need to obtain Improved Two-Weapon Fighting. You can get this by selecting Combat Trick under Medical Discovery when you reach Level 8.

Lastly, you’ll want to take Outflank if you have an ally who also has this Teamwork Feat. Provided that you’re both flanking the same target, you get a +4 Attack Roll Bonus, which removes the penalty you receive from Piranha Strike. When you critically hit them, your teammate promptly executes a follow-up Attack of Opportunity. 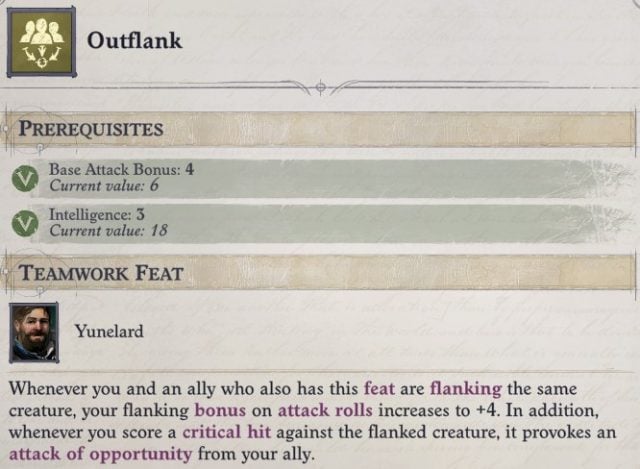 Starting at Vivisectionist Level 2 until Level 16, you can choose from a list of Medical Discoveries, which you should take in the following order, to further enhance your capabilities and survivability.

With these Medical Discoveries up to Level 16, you’re able to significantly buff the Attributes that matter most to you such as Dexterity, Constitution and Strength thanks to Grand Mutagen. 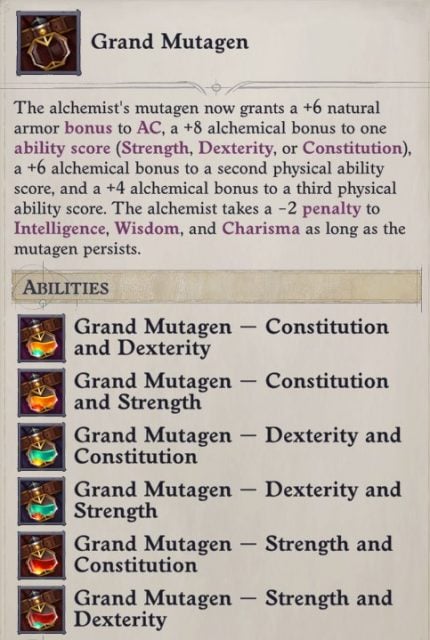 You also gain a 7th attack in the form of Bite Attack upon drinking this Mutagen. This works very well with Dazzling Display since you get Persuasion Check Bonuses.

Next, you’re able to cast Alchemist Spells on your allies. For example, Transformation, which has the ‘Personal’ tag in its description, can now be cast on them too so make sure to do this once you gain additional Spell Slots with Mythic Abilities. And lastly, you deal damage to your target’s Strength Attribute with Crippling Strike after dealing Sneak Attack Damage.

When it comes to Spells, you’ll want to get the ones that boost your defenses such as Mage Armor, Barkskin, Shield, Haste and Transformation. You immediately gain access to Mage Armor since this is a part of the initial Spells for the Eldritch Scoundrel. You’ll obtain the other four from leveling up the Alchemist Class. Together with Grand Mutagen, make sure to at least apply Mage Armor, Barkskin and Shield prior to the start of an encounter to significantly increase your AC. 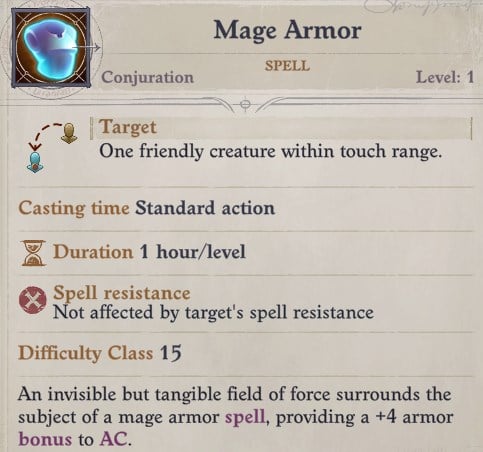 You should also obtain Illusion Spells to partially conceal Woljif, especially at earlier levels. Examples of essential Spells are Mirror Image that you can get by reaching Eldritch Scoundrel Level 4, Blur, Displacement, and Greater Invisibility. Lastly, you also have the option to heal yourself and the rest of your allies with Cure Wounds Spells or to grant temporary HP, which will first be targeted by enemies, with False Life, Greater.

You can pick 10 Mythic Abilities and Feats in any order to enhance Woljif’s defensive and offensive capabilities. For Mythic Abilities, you should acquire the following:

These Abilities not only enhance your AC even more after personally casting Mage Armor, but they also raise the Spell Slots you have, which aren’t that many since you’re not a pure Spell Caster. You also improve your Attack and Damage Rolls every time you perform Attacks of Opportunity thanks to Ever Ready.

For Mythic Feats, you’re going to select the Mythic versions of:

These Feats further improve your Attack and Damage Rolls, Sneak Attack Damage, and Critical Multiplier. Lastly, in order to reduce the penalty you receive for iterative attacks from Piranha Strike, it’s good to take Flawless Attacks.

In terms of Woljif’s Weapons, you’ll equip the best Daggers you come across. Make sure to wield Masterwork versions so you receive a +1 bonus to your Attack Rolls. Even if you gain Light Armor Proficiency with Vivisectionist, you won’t be wearing one since bonuses of the same type don’t stack. The Armor Bonus you receive from Mage Armor and Archmage Armor (Mythic) are both much higher compared to Light Armor anyway. 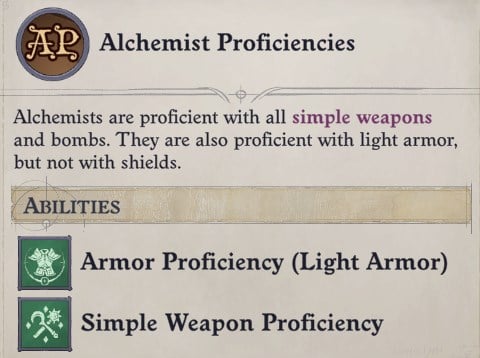 To raise all of your Saves and your AC, it’s recommended to wear the Cloak of Resistance and Ring of Protection. The latter’s Deflection Bonus doesn’t clash with the other bonuses you have.

Woljif’s Build becomes more manageable the moment you fully invest in the Vivisectionist Alchemist Archetype since you no longer have to micromanage him in order to survive encounters. With the Grand Mutagen, Ring of Protection, buffs, and bonuses, he can reach up to 50 AC.

To determine whether or not bonuses stack with one another, make sure to equip newly discovered items while your buffs are active. For instance, the Enhancement Bonuses you acquire from the Belt of Incredible Dexterity and the Transformation Spell aren’t cumulative since they’re essentially the same bonus type.

Lastly, remember to personally cast Haste and Transformation especially when you’re dealing with strong enemies as these Spells provide you with 2 additional Melee Attacks for your Main Hand Weapon. In total, you’re able to execute 9 attacks per turn. 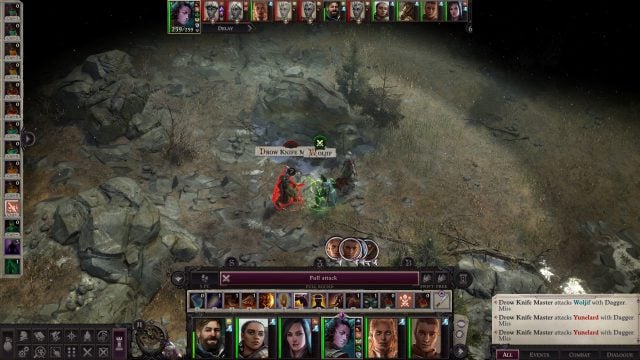