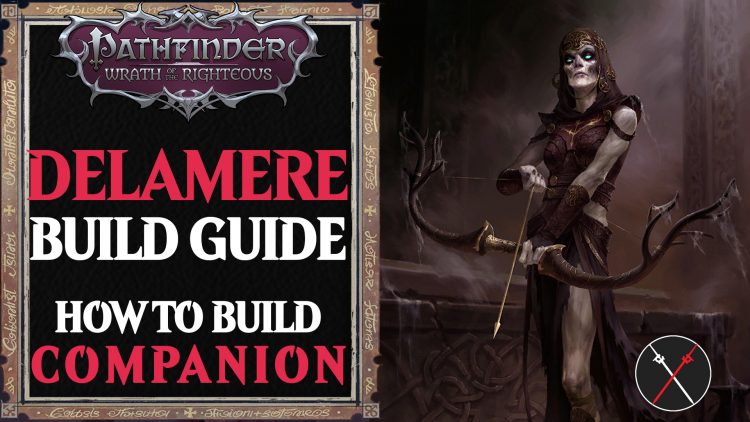 Delamere Build Pathfinder Wrath of the Righteous Guide – In this Delamere Build Guide, I’m going to break down the best Archetype to multiclass with, Attributes, Skills, Feats, Rogue Talents, Mythic Path, and Equipment you should choose to make Delamere’s Slayer Rowdy Rogue Hybrid as powerful as possible. If you’re looking for a way to deal massive Ranged Damage with a single attack, then this Delamere Build Guide is for you!

After choosing the Lich Path and completing Lich Quests, you’ll be able to recruit Delamere at the Temple of the Good Hunt. Delamere is a Level 10 Undead Slayer. Right off the bat, she has decent Attributes and Feats that make her reliable in Combat. Let’s go through these one by one. 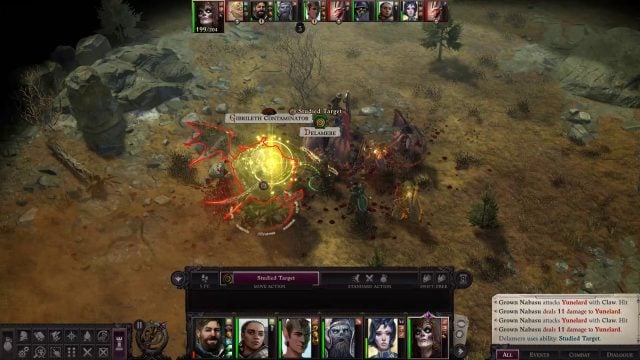 As a Ranged Slayer, Delamere already has Feats, which enhance her Attack and Damage Rolls such as Point-Blank Shot, Weapon Focus (Long Bow), and Deadly Aim. Particularly, Deadly Aim notably boosts your Damage Rolls but you take Attack Roll Penalties. However, this can be countered by using specific Mythic Feats and Attribute points allocation that we’ll discuss more in this guide.

On top of these, you also gain Slayer Proficiencies, Talents, Abilities, and more importantly, Sneak Attacks. In terms of proficiencies, you can wear Medium Armor to improve your Armor Class (AC) in order to dodge enemy attacks effectively. But for our Companion Build, we’ll be wearing the Bracers of Armor instead of Medium Armor as it boosts AC even more since we won’t be faced with Max Dexterity limitations. 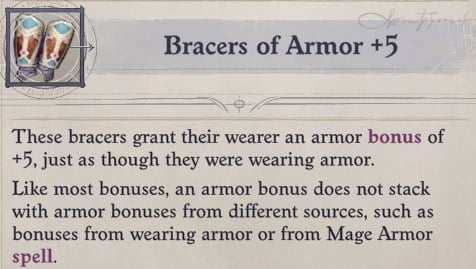 Next are Slayer Talents, which provide you with unique abilities or extra Feats. In Delamere’s case, she has taken Precise Shot, Manyshot, and Point-Blank Master Feats. Precise Shot reduces the standard penalty you receive when you shoot at a target who is otherwise engaged in Melee Combat. Manyshot lets you fire two arrows in one Full Attack to deal higher damage. Any bonuses you have such as Strength Bonus that comes from wielding a Composite Bow, are also taken into account. And Point-Blank Master prevents Attacks of Opportunity from nearby enemies as you’re performing Ranged Attacks. 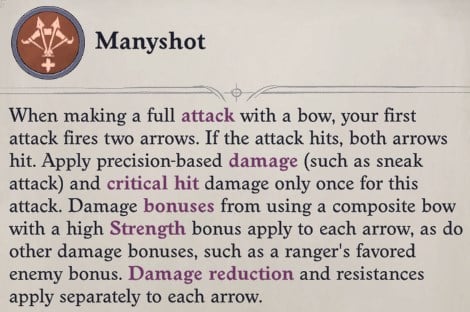 When it comes to the actual Slayer Talents, you have Dispelling Attack, which is triggered after dealing Sneak Attack Damage. This Ability lets you dispel the enemy’s buffs so they’re much easier to put down. Similar to Rogues, Slayers are able to execute Sneak Attacks to inflict extra 1d6 Precision Damage against a flanked creature. As a result, that same creature loses their Dodge and Dexterity Bonuses to AC, making them extremely vulnerable.

Last but not the least is Studied Target. This grants Delamere additional Attack and Damage Roll Bonuses while improving her Save DCs against the chosen enemy. At Level 7, you can activate Studied Target as a Swift Action. Moreover, you’re able to automatically reap its benefits the moment you inflict Sneak Attack Damage. 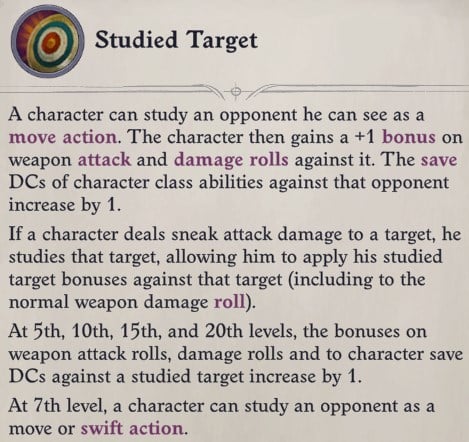 Delamere’s straightforward Ranged Slayer Build is already decent in itself. You can take several additional Feats while inflicting a total of 7d6 Precision Damage, which also includes her Accomplished Sneak Attacker Feat. However, we’ll be multiclassing with the Rowdy Rogue to further improve our Sneak Attacks while utilizing the Standard Action known as Vital Strike.

Upon reaching Level 11, you’ll start leveling up Rowdy Rogue until Level 20. With this Archetype, you’re able to deal extra 5d6 Precision Damage with Sneak Attacks alone since you acquire it more frequently.

You also gain access to other useful Feats such as Vital Strike and Improved Vital Strike at Rowdy Rogue Levels 1 and 6, respectively. This lets you make a single attack to deal 2-3x the lethal damage from afar. What enhances Vital Strike even more is Vital Force, which adds double the damage you inflict with Sneak Attacks. 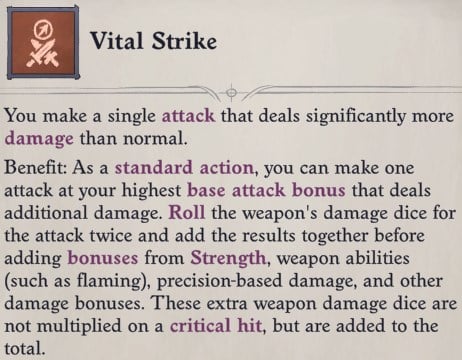 Lastly, this Archetype provides more Feat Slots and Rogue Talents at every other level so you don’t miss out on the perks you would’ve gained had you continued leveling up Delamere’s Slayer Class.

Starting at Level 12 and after every four levels, you’ll be able to add 1 point to any of your Attributes. With Delamere, you’ll only have to improve Dexterity at Levels 12, 16 and 20. This Attribute not only enhances the chances of successfully hitting enemies, but it also boosts your defenses such as AC and Reflex Saves since you’re squishy compared to Lann and Arueshalae. In total, you’ll get 22 Dexterity with a modifier of +6. 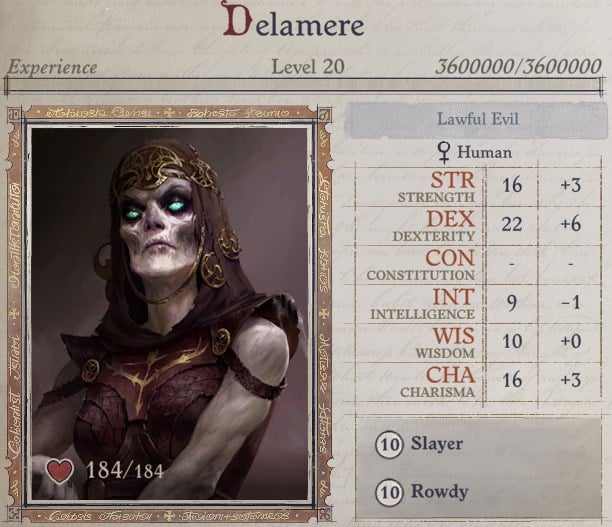 To raise this even more, you can equip the Belt of Physical Flow, which also enhances Strength, and consequently, the damage you deal using Composite Longbows.

Given Delamere’s limited Skill points per level, you’ll only want to focus on a select few that initially provide her with bonuses, namely Mobility, Stealth and Perception. Mobility helps the party traverse difficult terrain with ease. It also reduces the chances of getting hit by Attacks of Opportunity when you pass enemies in combat. 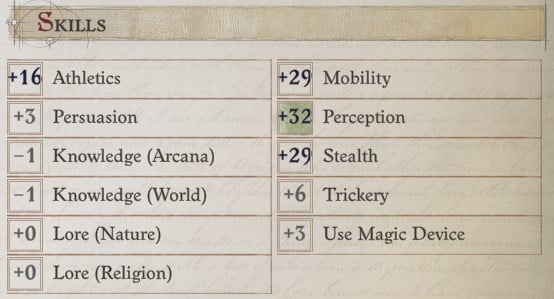 Stealth prevents random encounter occurrences while you’re exploring the map whereas Perception enhances your awareness towards the things around you. For instance, if there are hidden traps or locked chests nearby, you can readily detect them.

From Levels 11 to 20, you’ll be able to choose 5 Regular Feats and 2 Combat Trick Feats for Delamere. The ones you’ll acquire are centered around stacking additional damage, improving Critical Hits, and increasing the chances of executing Attacks of Opportunity. 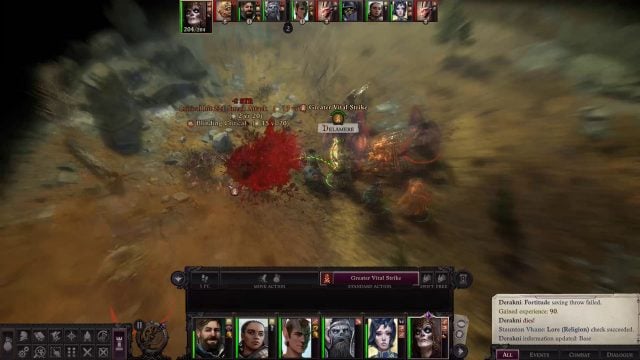 Here are the Feats that you ought to take in order since you need to fulfill Base Attack Bonus (BAB) requirements and other prerequisites beforehand:

What you want with these Regular Feats is to provide you with as much damage as possible even if you engage using normal attacks. Because of Rapid Shot, you get to make one more attack for a total of 5 at your highest Attack Bonus. This is executed with a Full Attack, which means that you can’t perform a Movement Action in the same turn. The benefit you receive from this Feat is enough to compensate for the Attack Roll penalty you take.

Meanwhile, Snap Shot related Feats increase your Melee Threat Range to raise the chances of triggering Attacks of Opportunity with your Longbow. Greater Snap Shot further improves the actual Feat by granting you bonuses to Damage and Critical Hit Confirmation Rolls so you don’t have to worry about nearby enemies since you’re able to adequately protect yourself from them. 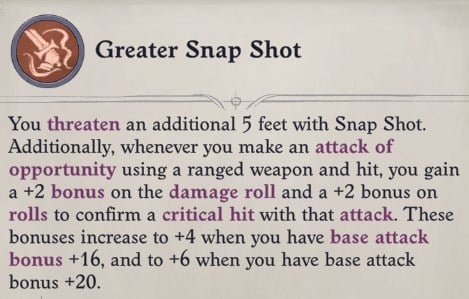 At Level 20, you’ll be taking Greater Vital Strike as a Combat Trick Feat since you have no way of automatically obtaining this given that your Rowdy Rogue can only reach a Max Level of 10. The most important aspect is to acquire this since it significantly boosts your Weapon Damage by 4x while retaining the rest of the benefits you obtain from Vital Strike. Overall, it’s possible to deal 200+ worth of damage with this Build to one-shot most targets. 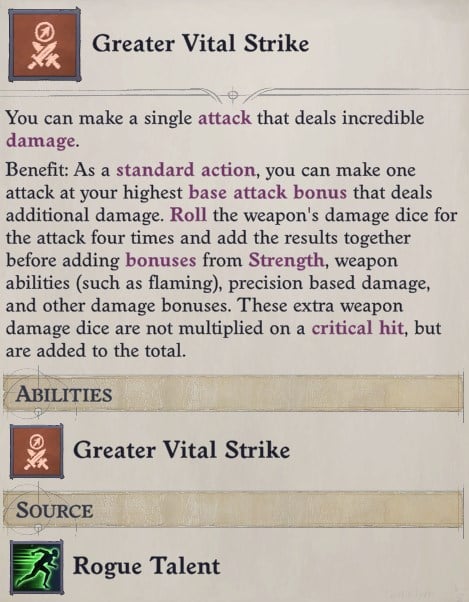 Similar to Slayers, Rogues receive special talents to primarily improve their ways of dealing with enemies. Here are the Rogue Talents that Delamere should take in order:

Crippling Strike damages Strength, thereby reducing it by 2 points so this is definitely useful against creatures who are melee focused. Meanwhile, Blinding Strike allows you to inflict the blind condition permanently with confirmed Critical Hits. You don’t need the Critical Focus Feat to acquire this talent so you essentially bypass that prerequisite. 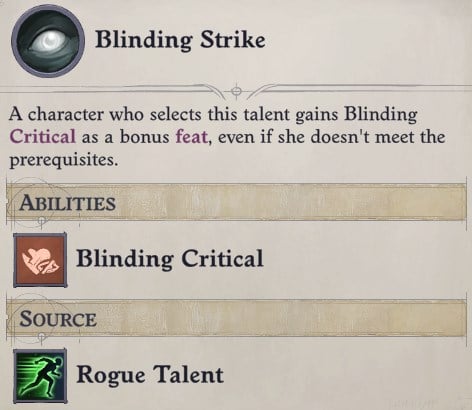 And finally, you’ll be taking Opportunist, which acts like a Teamwork Feat. It provokes you into performing an Attack of Opportunity against a target who has just been damaged in melee by your ally.

Distracting Shots and The Bigger They Are let you take advantage of the AC penalties your target takes. The former reduces their AC against Melee Attacks while the latter grants you Attack Roll Bonuses based on the penalty they receive due to their larger size. The rest of the Mythic Abilities provides you with notable bonuses on initially missed attacks and Attacks of Opportunity as well as extra Weapon Damage upon dealing Critical Damage.

For Mythic Feats, you’re going to select the following:

The majority of these are Mythic versions, and therefore improvements of their corresponding Feats. Most importantly, with Vital Strike, you not only multiply your Weapon Damage, but also the rest of the bonuses you have that are accounted for when making Critical Hits. Examples of such bonuses include Strength and Enhancement Bonuses from your Composite Bow. 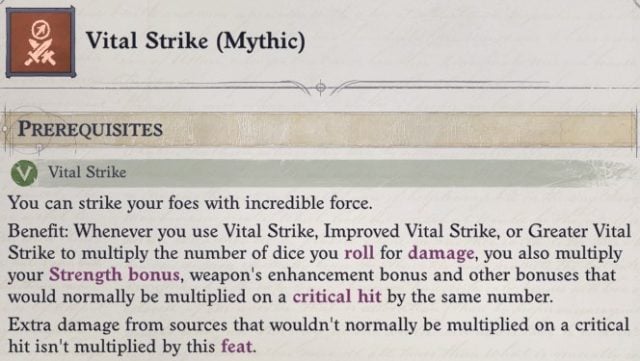 When it comes to this Build, you can retain her default Bow, which is Delamere’s Bow. Similar to the other Companions, make sure to wear the best versions of Cloak of Resistance, Ring of Protection, and Amulet of Natural Armor that you can get your hands on in order to boost defenses, which you so heavily need. Like Arueshalae, I don’t recommend equipping any Armor since it grants lesser AC due to the capped Max Dexterity. You can instead wear the Bracers of Armor because it doesn’t have this restriction. 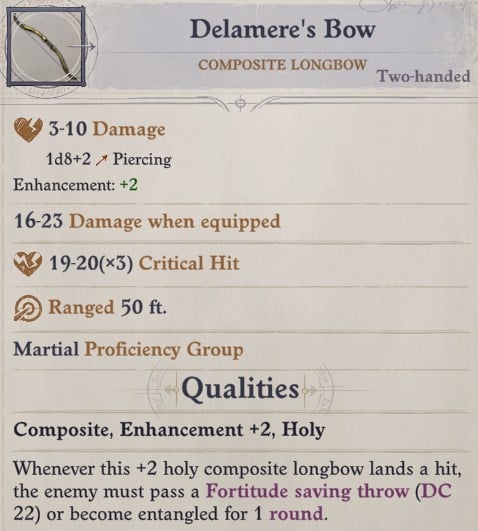 As mentioned before, you ought to wear the Belt of Physical Flow, which provides bonuses to Strength and Dexterity. Since you’re an Undead Human, you don’t have a Constitution Score. Instead, your HP increases with additional Charisma. As such, I suggest equipping the Headband of Alluring Charisma to improve your survivability.

Delamere is a reliably consistent Companion if you were to opt for the Lich Path, because of how great her Ranged Damage is regardless of performing normal attacks or Vital Strike. Attack Roll penalties against tougher enemies are easily countered with Greater Vital Strike, which can one-shot them. She also has the advantage of dealing more Sneak Attack Damage compared to the usual Slayer since we’ve multiclassed her with the Rowdy Rogue. 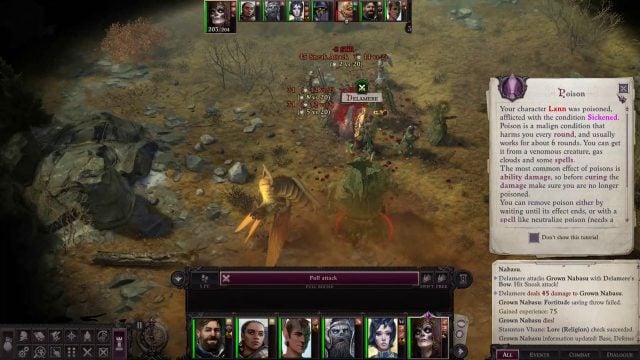 At Rowdy Rogue Levels 4 and 8, you gain access to Uncanny Dodge and Improved Uncanny Dodge. Both Class Features enhance your defenses since you can no longer be flanked, nor do you lose Dodge and Dexterity Bonuses to AC. This means that you’re harder to kill and enemies won’t be able to inflict Sneak Attack Damage against you. In case you need to raise your AC a bit more at higher levels, simply substitute the Improved Initiative Feat with Dodge.

As an Undead Creature, you possess qualities that are far different from the rest of the Companions. For instance, you can only be healed with Spells, which utilize Negative Energy such as Inflict Wounds and Harm. You’re easily damaged by Cure Wounds, Channel Positive Energy, and health potions so be wary when restoring Delamere’s HP. Lastly, you’re immune to certain conditions like death effects and disease, as well as mind-affecting effects like charms and phantasms, to name a few.

Stay tuned for the upcoming Class Build Guides and be sure to check our Twitch Channel or the Pathfinder: Wrath of the Righteous Wiki if you have questions on the game! Be sure to check out our other Pathfinder Wrath of the Righteous Guides like the Bloodrager Class, Arcanist Class, Cavalier Class, Top 5 Archer Builds, Best Class to Play, Arueshalae, Greybor, Regill, Sosiel, Woljif, Daeran, Wenduag, Ember, Nenio, Lann, Seelah, Camellia, and Beginner’s Guide!