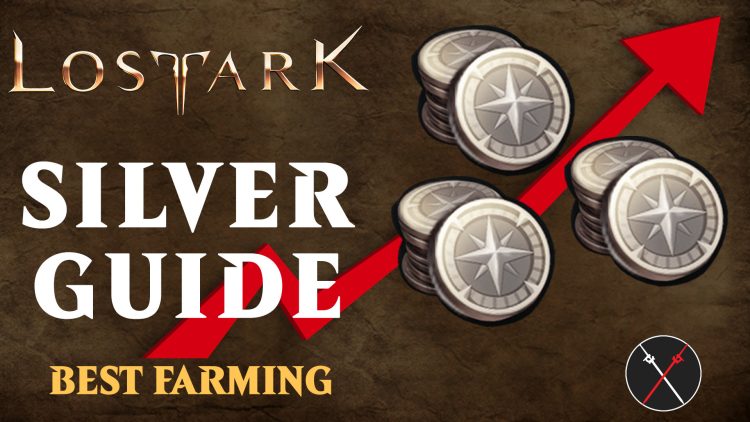 Lost Ark Silver Farm Guide: Best Ways to Farm Silver FAST! In this Lost Ark Silver Farm Guide, I’m going to share the best ways to earn Silver quickly by going through the activities you should engage in on a daily and weekly basis. If you’re low on Silver and you’re looking at how to farm for this currency efficiently, then this Guide is for you!

Silver is one of the various Currencies in Lost Ark. Right when you reach Level 50, the impact of Silver is not immediately noticeable since you’ll already have about a million of this from finishing Quests alone. However, when you hit Tier 2, you’ll actively spend this currency to board ships, teleport using your Bifrost, refaceting Gems, repair gear, and hone your Equipment to progress further. These activities become costlier the more you wish to min-max the Build of your characters.

We’ll divide this guide into several sections that also include dailies and weeklies that you need to participate in to accumulate a ton of Silver. Without further ado, let’s start with the Welcome Challenge!

The Welcome Challenge is a series of tasks, which feature quests that you’ll be doing anyway as you progress in the game’s narrative, including but not limited to the Basic Guide, upgrades made to Trade Skills and your Stronghold, gear enhancements, and so on.  What’s good with this is you get rewarded with different items simply by completing specific goals. For instance, if you attain a 20% completion rate in Anikka, you’ll receive 4,000 Silver or when you visit North Vern, you’ll get 10,000 Silver.  Even if the Welcome Challenge is roster-bound, meaning the rewards can only be obtained once, these will come a long way to contribute to your Silver savings. 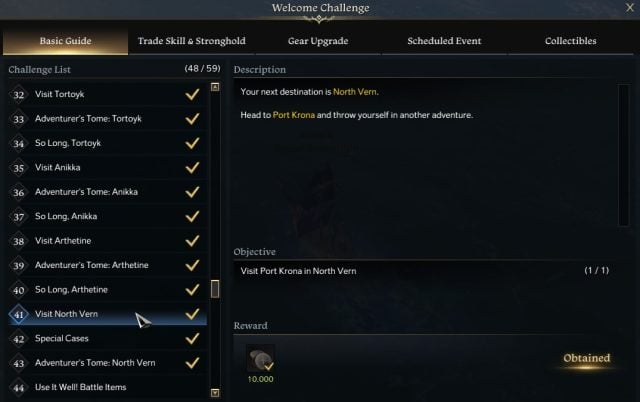 In relation to this, missions such as main, roster, and chain quests also give a decent amount of Silver so make sure to do them for every continent and Island you visit. It’ll all definitely accumulate, especially when you also level up your alt characters. Remember, however, that you don’t need to complete side quests or NPCs with yellow question marks on them because they only yield hundreds of Silver as opposed to thousands with respect to the other quest types we’ve just talked about.

Sea Bounties are a type of Collectible that rewards heaps of Silver chests the more treasures you discover. You can obtain the corresponding Secret Maps by achieving Adventurer’s Tome completions such as reaching 60% in Shushire and Arthetine. Moreover, you’re able to get additional Secret Maps by killing Bosses situated on islands and even doing transactions with traveling merchant ships. Basically, this activity will have you cruising around the waters of Arkesia to accumulate Sea Bounty points, which can then be exchanged for rewards in Peyto. 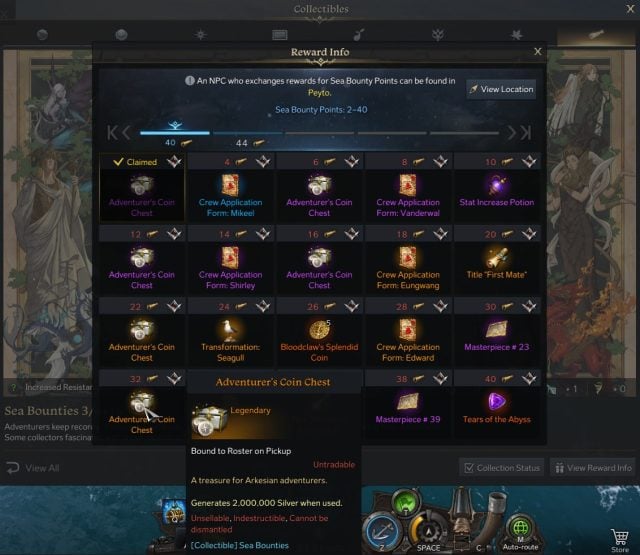 When you collect 2, 6, 12, 16, 22, and 32 Sea Bounties, you’ll receive Adventurer’s Coin Chests that’ll yield mountains of Silver. This can go as high as 2 million in one chest! But before venturing out into the open, remember to first upgrade your ship to at least Level 5 as riding through perilous waters can destroy it. You wouldn’t want to unnecessarily spend to fully fix your vehicle! It would also be good to purchase the Ship Skin: Hermida’s Song in the Lost Ark Shop as this allows you to automatically sail at full speed, which is very useful considering the numerous boat rides you’ll do in this game.

Another good source of Silver is the Shadespire and Fatespire Towers that you should complete using your alt characters, provided that you’ve initially completed them with your main character. This is due to the second set of rewards you get including predominantly honing materials as well as Ancient Platinum Coins worth 20,000 Silver each. In both towers, you get said coins after finishing Floor 9 so you should expect to receive a total of 200,000 Silver, which is a decent amount even if you only do it once per alt character. 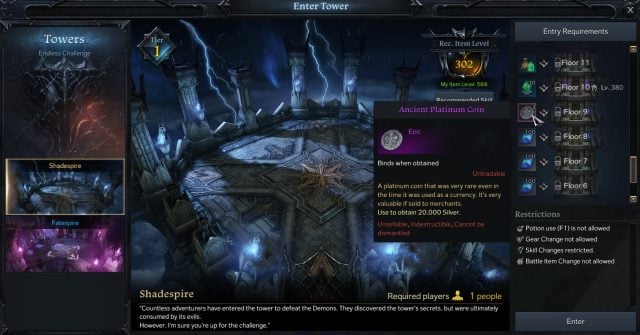 In Lost Ark, you’re able to play the instrument and use emotes to connect and improve your relationship with a bunch of NPCs. On a daily basis, you have a limit of 5 each for either activity unless you’re subscribed to the game via the Crystalline Aura. In which case, you’ll have 6 instead. You can also give them gifts to expedite the development of a good friendship between the two of you. Now you should start Rapport Actions as early as you reach Prideholme at Level 10 because it takes a long time to move from one stage to the next. 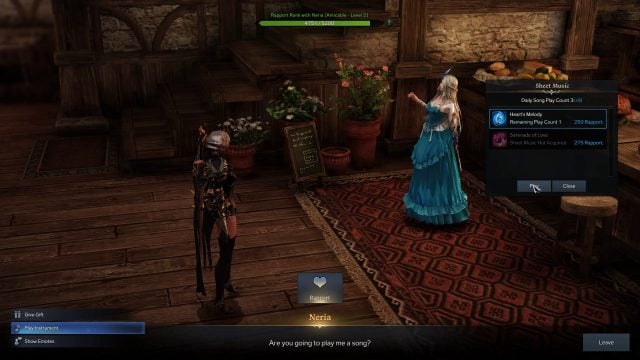 For example in Prideholme, when your relationship with Neria and Siera becomes Normal and Amicable, you’ll receive thousands of Silver. This is also true for the NPCs in Yudia, West Luterra, East Luterra, and so on. In fact, if your Rapport with Thirain reaches the Amicable status, you’ll receive 2 Ancient Platinum Coins, which are worth 40,000 Silver in total! 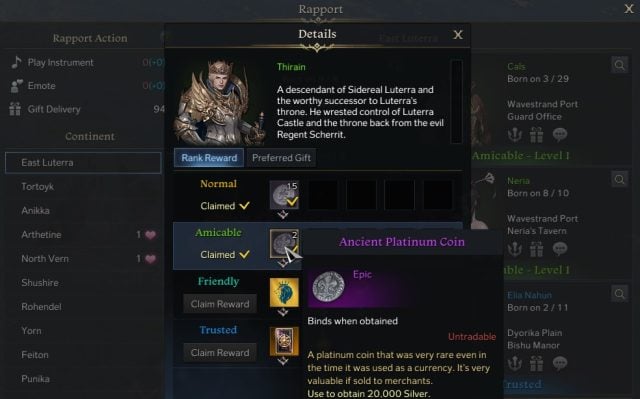 So the technique with Rapport rewards is to do it as soon as possible everyday so that in the long run, you’ll obtain a hefty amount of Silver even if it’s only a one-time thing. Make sure to check the ones who will provide this currency as a reward by checking out their Details via the magnifying glass that’s located at the upper righthand corner of every NPC.

When you reach North Vern upon hitting Level 50, Una’s Daily Tasks will be available to you. As early as Item Level 250, some dailies already feature thousands of Silver as their respective rewards. Of course, the amount depends on your character’s highest Tier but still, completing these tasks everyday will grant a consistent and decent supply of Silver.

What’s more is when you do them over a period of time, you also receive an ample amount of Silver. Simply head on over to the Reputation Status tab and then click the “Rep. Info” magnifying glass. Here, you’ll see the rewards you’ll get when you progress from one Reputation level to the next. The higher the Reputation level is, the more Silver you acquire so don’t forget to claim them in this tab once you progress. 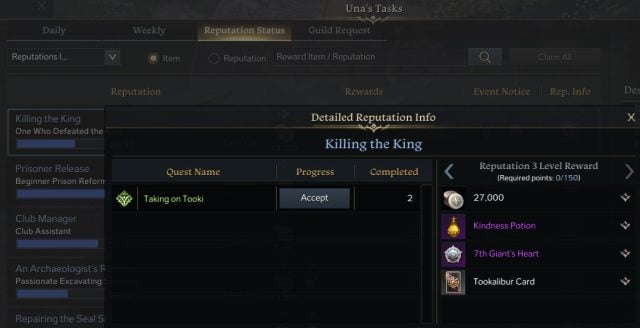 Here are some of the best daily tasks to prioritize for Silver:

Remember to involve all of your alt characters when doing Una’s Daily Tasks so that you can complete them efficiently. Make sure to assign Bifrost points as well to will help expedite the process further.

In addition to Rapport rewards and Una’s Daily Tasks, you should also sail to Lopang Island, which is near Anikka’s Port City Changhun and North Vern’s Port Krona. When you get here, simply approach Senior Manager Jasni and complete the three Roster Quests called Lopang Inc., Blooming Passion, and The Wind at Your Back. Doing so will unlock 6 Special Delivery Una’s Daily Tasks, which will require you to visit Luterra, Tortoyk, Annika, Arthetine, Vern, and Shushire.

Out of all these tasks, the most efficient ones to farm are those located in Arthetine, Vern, and Shushire since they give at least 16,790 Silver each. You can keep doing them daily and with different characters to get as much Silver as you’d like.

Next, be sure to check Procyon’s Compass for Adventure Islands to choose from. What happens is you’ll be able to select from three of them. You’ll notice that one of these islands features two Silver rewards, meaning, they’ll grant chunks of Silver compared to the other two, which will only give hundreds of them. Some examples of good Adventure Islands to pick are Snowpang and Volare. 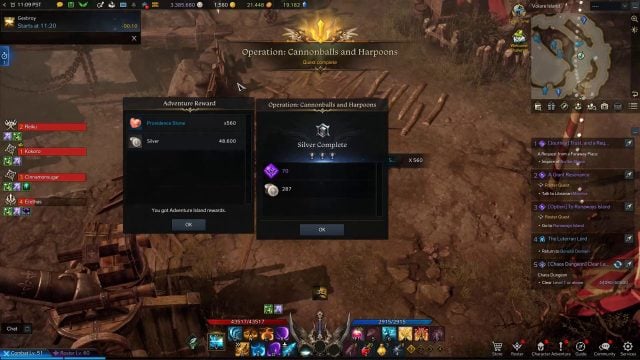 Participating in Chaos Dungeons everyday should net you about 100,000 Silver for every 2 runs on Tier 3 and around 50,000 Silver on Tier 2. This activity is not only a great way to earn honing materials but also a chunk of Silver per character so you’ll want to include it in your list of daily activities to do. One of the drops in Chaos Dungeons to look out for is the Cube Dungeon Entrance Ticket. 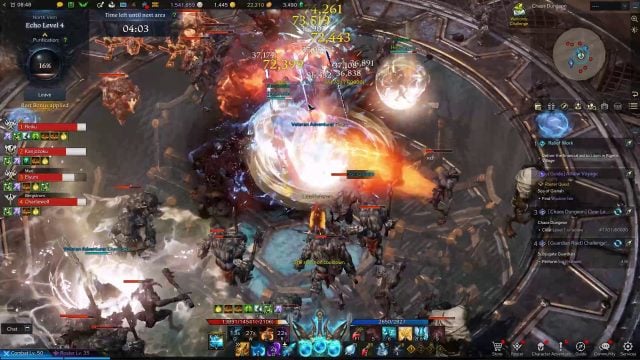 Acquiring Diamond or even Platinum Chests from this should yield a substantial amount of Silver. If you have three Entrance Tickets, you’ll gain even more rewards and Silver so try to save them before going in. The farther level you reach for Cube Dungeons, the more Silver you earn so aim to finish 15+ levels in one go since the respective entrance ticket is a rare drop.

What makes both Chaos and Cube Dungeons profitable is the fact that they each have corresponding quests under Una’s Weekly Tasks as soon as you reach Item Level 302 so don’t forget to accept them before doing either activity. Because of this, completing Chaos and Cube Dungeons should provide you with an additional 22,000 Silver and 44,000 Silver, respectively, in Tier 2. The higher the tier, the more Silver you get. 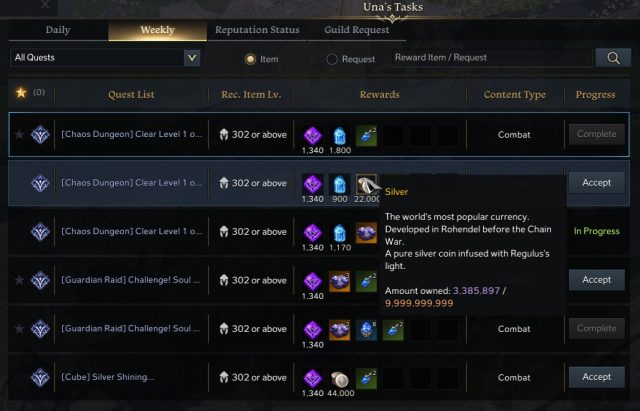 The other good sources of Silver under Una’s Weekly Tasks are Boss Rush and Trade Skills. Similar to Cube Dungeons, you need Boss Rush Entrance Tickets to participate in said event. You can get them randomly from Chaos Dungeons. You also have to be mindful of your Item Level since the minimum value should be 802. 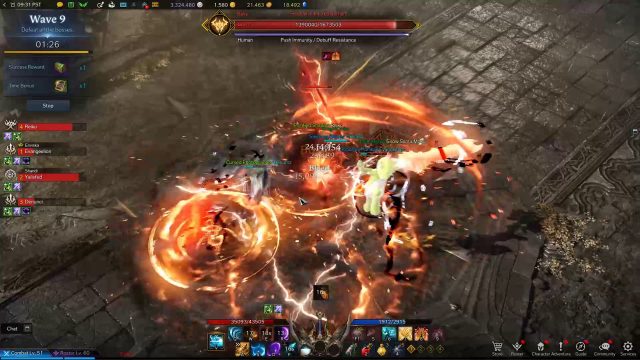 Next are Trade Skills, which will make you collect 1,000 items by Logging, Excavating, Fishing, Hunting, Mining, and Foraging. This is easy to complete since they’re done alongside quests, plus you even receive additional materials to upgrade your Stronghold in the process.

Stay tuned for more Lost Ark Endgame Guides and be sure to check out our Lost Ark Wiki or drop by our Twitch Channel if you have questions about the game. You can also check out our Build Guides like Shadowhunter, Sorceress, Sharpshooter, Paladin, Bard, Wardancer, and Soulfist. What did you think of this Lost Ark Combat Silver Farm Guide? How is your gear progression going so far? Let us know in the comments below!