Nenio Build Pathfinder Wrath of the Righteous Guide – In this Nenio Build Guide, I’m going to break down the best Attributes, Skills, Feats, Spells, Mythic Path and Equipment you should take for Nenio to deal effective Ranged and AoE Damage. With this Companion, we’ll go for the pure and straightforward Scroll Savant Wizard Build. If you’re looking for a DPS Build that employs crowd control techniques to confuse enemies, followed by powerful Spells to kill them, then this Nenio Build Guide is for you! 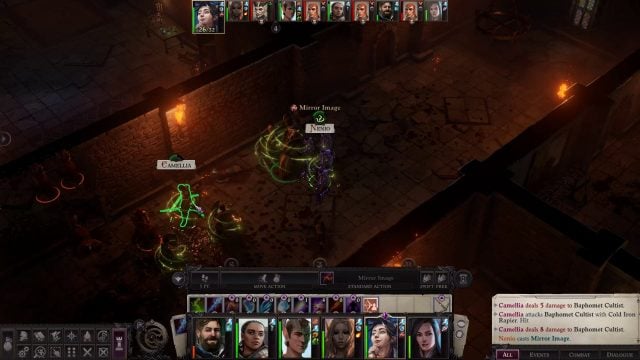 Nenio’s Build focuses on becoming an expert in two Schools of Magic, specifically Illusion and Evocation. With Illusion Spells, Nenio is able to disorient enemies, forcing them to roll for Saving Throws to negate or reduce the harmful effects they receive. With Evocation Spells, she’s able to utilize both Ranged Touch Attack or Ray Spells as well as AoE Spells. We’ll be diversifying our Spell List, which is the reason why we won’t be focusing on just one of these, to effectively target multiple enemy types. 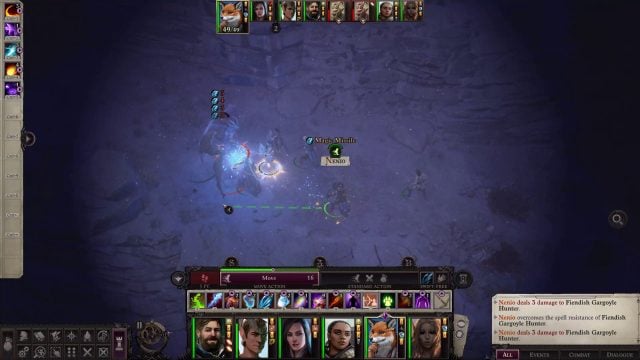 Also, remember that Wizards need to prepare Spells in their Spellbooks prior to taking a rest so they can cast them afterward. You can also control the number of times you’re able to cast a Spell by adding multiple versions of it in your Spell Slots without any penalty.

By the time you meet Nenio at Level 3, she automatically has the following Feats, Proficiencies and Abilities:

Starting at Level 4 and after every four levels, you’ll be able to add 1 point to any of your Attributes. With Nenio, you’ll only want to improve two Attributes to improve the effectiveness of your Spells as well as to improve your defenses. At Levels 4 and 8, you’ll want to add 2 Intelligence points. 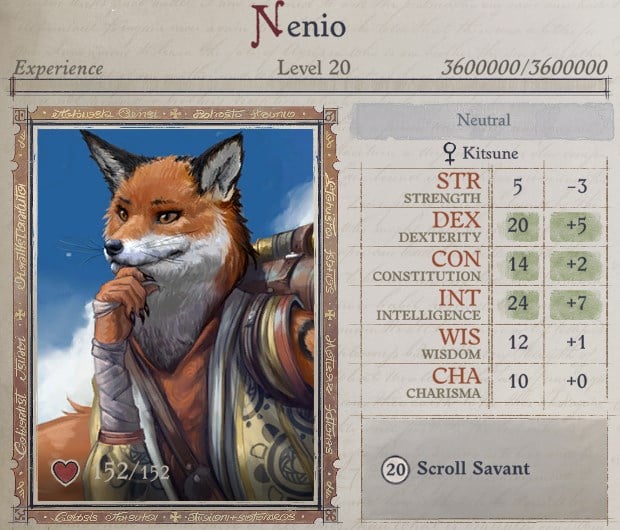 Intelligence is the Wizard’s Spellcasting Ability, which allows Nenio to learn and cast numerous Spells. Additionally, it’s respective modifier determines the Spell’s DC. To increase your Intelligence by 2, you’ll need to wear Draven’s Hat. In total, you should have 24 Intelligence with a +7 modifier. 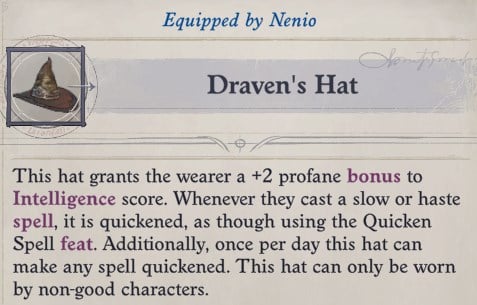 The second Attribute is Dexterity, which you’ll have to increase by a total of 3 points at Levels 12, 16 and 20. This boosts your Armor Class (AC), which makes it difficult for enemies to hit you. It also influences the Attack Rolls of your Ray Spells (or those that are Ranged Touch Attack), meaning, you have a better chance of hitting enemies if your Dexterity is high. You ought to have 20 Dexterity with a +5 modifier.

When it comes to Nenio’s Skills, you’ll want to focus on Knowledge (Arcana), Knowledge (World), Mobility, and Use Magic Device. Knowledge (Arcana) lets you learn Spells from Scrolls by permanently adding them to your Spell List. Additionally, it helps to craft Scrolls and to identify magical items without the need to go to merchants. Knowledge (World), on the other hand, improves your chances of successfully cooking meals while camping to buff the party. It also provides you with creature information so you’ll know their strengths, weaknesses and immunities. 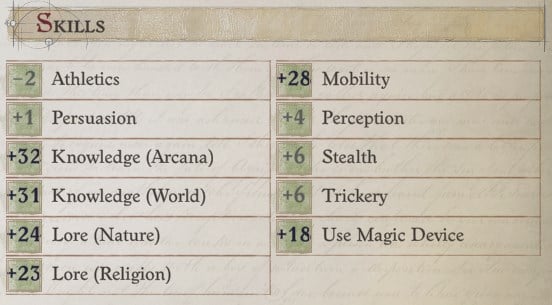 Next, Mobility improves your ability to move past enemies without getting hit by Attacks of Opportunity. This is very important for your Build considering how low your defenses are, especially at the beginning of the game. Lastly, you’ll want to raise the rank of Use Magic Device to cast Scroll Spells. This is true for other Schools of Magic you haven’t specialized in such as Divine Spells to heal yourself or the party if needed. Otherwise, reaching Ranks 3-6 should be sufficient.

From Levels 5 to 20, you’ll be able to choose 8 Feats for Nenio with 1 Feat at every other level. You’ll focus on dealing Ray Spells, AoE Spells, as well as Mind-Affecting and Concealment Spells. 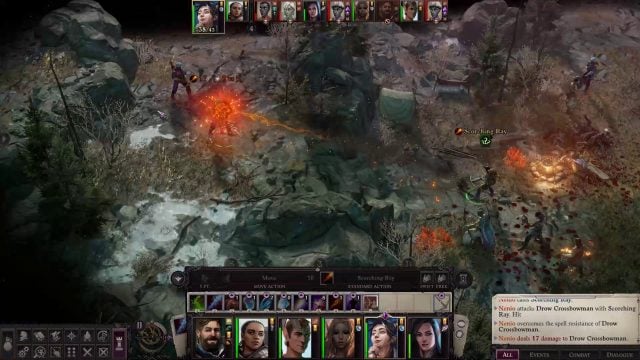 Starting at Level 5, you ought to take these important Feats in the following order:

At Levels 15 and 20 as a Wizard, you get 2 Bonus Feats, which don’t stack with regular Feats. These are extra Feats, whose prerequisites you still have to fulfill unlike the Monk’s Bonus Feats. You can opt to get these in any order.

Nenio’s Build focuses on using Ray Spells like Scorching Ray together with AoE Spells such as Fireball. It’s important to choose the Spells that force your targets into rolling for different Saving Throws to take advantage of their weaknesses and to improve your chances of fully damaging them. Lastly, other Spells also employ crowd control to make it easier for the party to maneuver in combat. 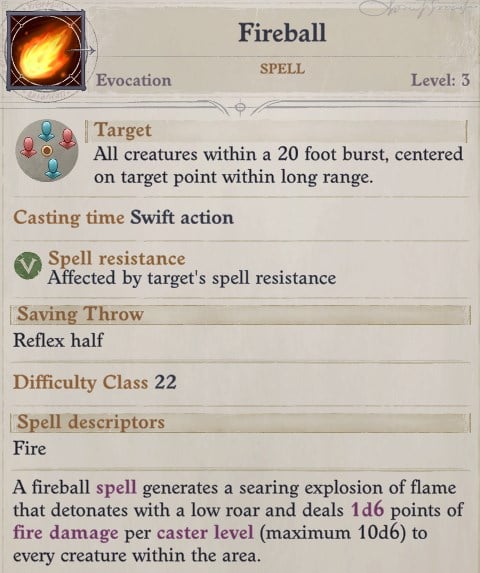 For Ray Spells, which you’ll both Empower with Metamagic, you’ll want to get Scorching Ray and Hellfire Ray. Scorching Ray blasts your enemies with a maximum of 3 rays at Level 11. Each ray deals 4-24 Fire Damage. Meanwhile, Hellfire Ray is an upgraded version of Scorching Ray since you’re able to inflict a maximum of 15-90 Fire and Unholy Power Damage for 3 rays per damage type. As such, you’re still able to decently harm your target even if they have Fire Resistance. 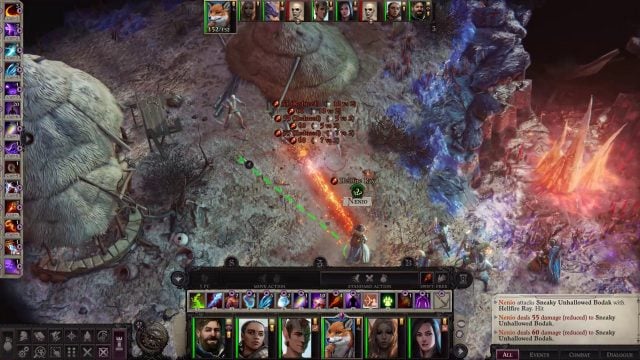 You can empower other Spells of course but it’s essential to include these two in the list to be able to obliterate your target in a single turn. To do this, simply go to Nenio’s Spellbook Tab and click ‘Metamagic’ at the bottom left-hand corner of the screen. Add a Spell in the middle square of the big circle by double-clicking on the icon or by dragging it. Click the “Sword Icon” on top of this and then select “Write spell” at the bottom. 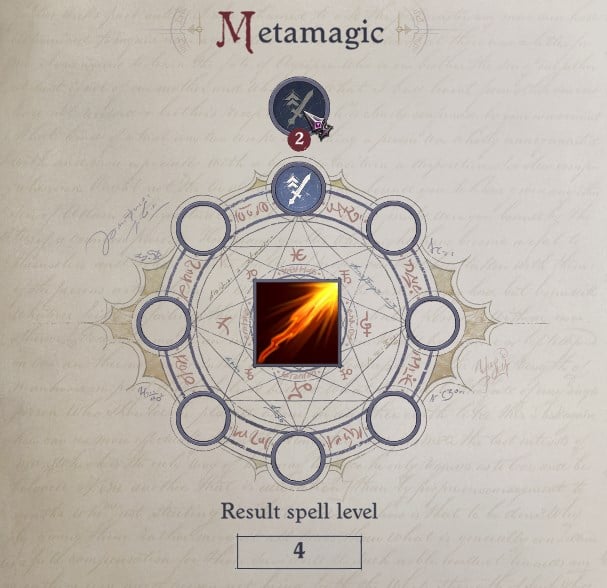 Your newly Empowered Spell should be found under its new level. Remember that you still get to keep a copy of the original in the same level. Spells with circles on top of their names can be empowered.

Another good single-target Spell to take is Magic Missile. It works like Scorching Ray except that it hits the target without the need to make an Attack Roll. However, if the enemy’s Spell Resistance is high or they’re immune to Magic Missile, it’ll do no damage. This becomes potent at Level 9 when you’re able to hit enemies with 5 missiles. 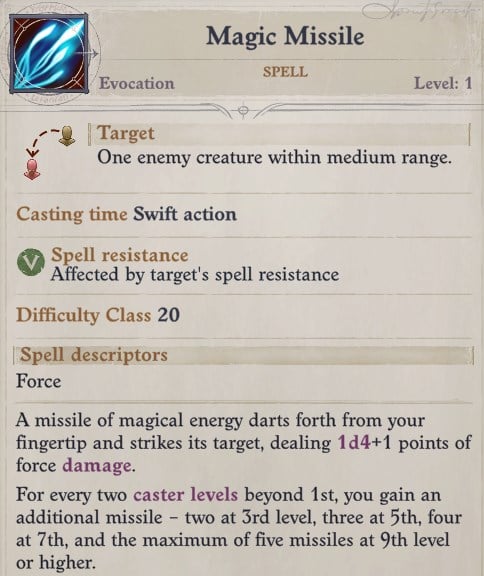 For AoE Spells, where targets have to successfully roll their Fortitude and Reflex Saving Throws, it’s good to consider taking the following:

Scrolls are weaker because they use minimum modifiers, which don’t have much impact as compared to the Spells you prepare. For the Scroll counterparts of Empowered Spells like Scorching Ray, you won’t be reaping the added damage from this Metamagic Feat but you gain two distinct advantages.

At Level 10, you automatically gain the Scroll Mastery Bonus Feat. This lets you add your Caster Level to determine the damage when casting from a Scroll, as opposed to this item’s low Caster Level. Take Fireball for example. If you’ve run out of slots for this Spell, you can use a Scroll of Fireball to deal the same amount of maximum damage, which is 10d6. Without this Feat, you would’ve only dealt 5d6 Fire Damage since 5 is the Scroll’s Caster Level.

Let’s use the Fireball Spell again but this time for Scroll Specialization, which is another Bonus Feat that you automatically get at Level 5. This states that your Intelligence Modifier will be used for your Spell DC instead of the Scroll’s minimum modifier, which is equal to the Spell’s Level divided by 2, rounded down. Spell DC will then be calculated as follows:

For the Scroll of Fireball, it’s default DC is 14. With Scroll Specialization, it’s boosted to 22 because of Nenio’s +7 Intelligence Modifier in place of the Scroll’s +1 modifier as well as her +2 DC Bonus from Spell Focus (Evocation) and Greater Spell Focus (Evocation). This is the same DC as if you were to cast Fireball from your prepared Spells. As such, your targets will have a much harder time reducing Fireball’s damage by half. 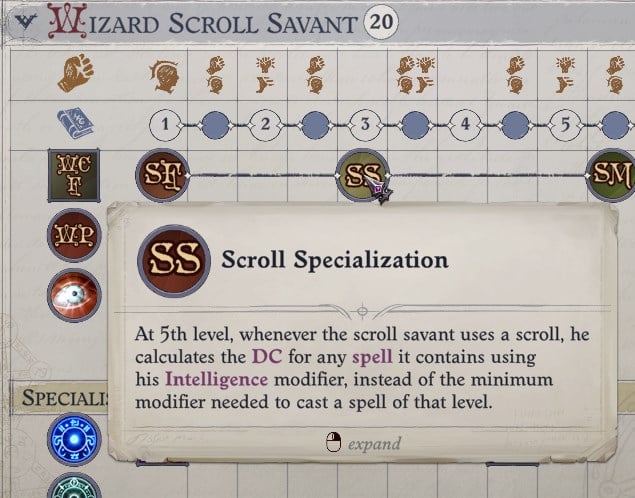 Due to your limited Spell Slots, you want to make sure that you have a lot of other Scrolls, particularly for Spells that aren’t empowered, to be able to deal the same amount of damage you normally would. What you can also do is to increase the number of prepared Empowered Spells while saving the rest for Scrolls since you have the proficiency to craft these anyway.

Non-Damage Spells are made up of an AC buff together with Illusion Spells, which are effective at crowd control to disorient enemies. They’ll need to successfully roll for Will Saving Throws to lessen spell impact. Here are some Spell suggestions but feel free to add more. 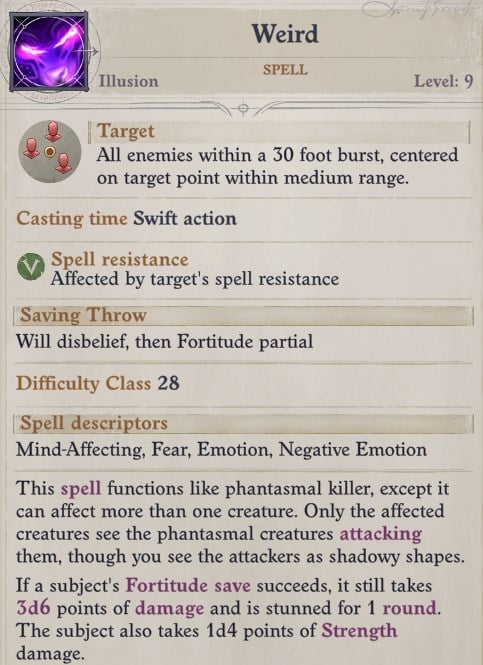 For Mythic Feats, you’re going with the ones that enhance your Spell DC, Caster Level and Checks, and Critical Multiplier, specifically Spell Focus (Mythic) (Illusion), School Mastery (Evocation), Spell Penetration (Mythic), and Improved Critical (Mythic). It’s also good to take Sorcerous Reflex as this allows you to cast two Spells in one turn after rolling for initiative since the first one is treated as a Swift Action.

Since Nenio is going to use Spells and Scrolls, it’s not mandatory to equip a Weapon. But if you feel the urge to then a Crossbow would suffice, particularly early during easier encounters. For her Clothing, you can switch between the Silver Robe and Shirt of Blazing Fighter. The Silver Robe provides you with a Saving Throw Bonus against Fear whereas the Shirt of Blazing Fighter grants you Fire Resistance.

For Nenio’s Accessories, make sure to wear Draven’s Hat and the Belt of Physical Form +2 to increase Intelligence, Dexterity and Constitution Scores. Constitution increases your max HP. It’s also important to wear the Cloak of Resistance +2, Ring of Protection +3, and Amulet of Natural Armor +3 to boost your defenses.

Lastly, don’t wear the Bracers of Armor +5 because its Armor Bonus won’t stack with your Mage Armor Spell and Archmage Armor Mythic Ability. You’ll be able to gain a higher AC with this duo as compared to the Bracers. 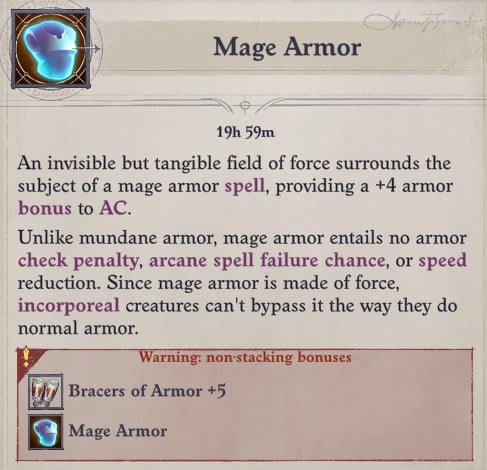 Nenio has an interesting Scroll Savant Wizard Archetype, which seems confusing at first due to the high volume of Spells to choose from. Because of this, I’ve decided to focus on Evocation and Illusion Spells to specialize in.

Since your Spell Slots are limited, especially at earlier levels, remember to cast Ray Cantrips such as Ray of Frost, Acid Splash, and Jolt to finish off enemies with low HP. Alternatively, you can use a Crossbow so that you’re not hampered by their Spell Resistance.

Lastly, take advantage of the Invisibility Field Ability, which you receive at Level 8. This acts like Greater Invisibility in that you continue to be imperceptible even when you attack.