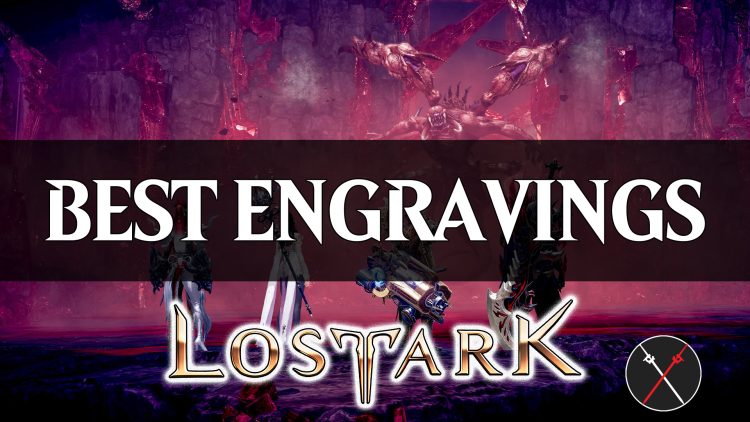 Lost Ark features two types of Engravings, which can be obtained via Engraving Recipes, Ability Stones, and Accessories. Before you even hit Level 50, you’ll get a glimpse of what these are in Luterra Castle. However, engravings truly shine once you reach endgame content. The two engravings available in the game are Class and Combat Engravings. Class Engravings allow you to choose from 2 distinct options per Class. 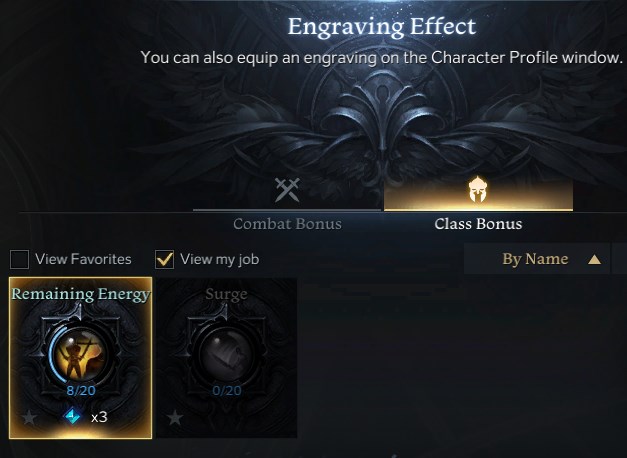 One of the most popular Combat Engravings in Tier 3 for DPS classes is Grudge. Grudge increases the damage you deal against Bosses, which is very useful in Guardian Raids and Abyssal Dungeons. However, this comes at a price since the damage you take in return is huge. From levels 1 to 3, you’ll receive the same amount of damage, that is, at 20%. As such, you should only use Grudge when it reaches Level 3 as the penalty greatly outshines the potential benefits. Additionally, and at this stage, the damage you inflict will also be +20% as opposed to levels 1 and 2, which is equivalent to a mere +4% and +10% more damage, respectively. 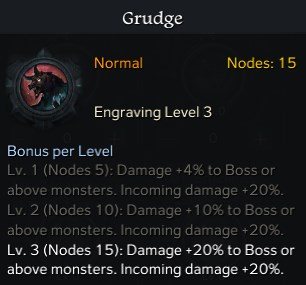 If you’ve recently reached Level 50 for the first time, I would advise against equipping Grudge until you’re extremely familiar with boss mechanics because the +20% damage is no joke, especially if you’re playing as one of the squishier classes like the Sorceress. The level of mastery you attain makes the negative effect of this Combat Engraving insignificant in the long run but it’s definitely easier said than done.

Grudge should be at the top priority for most classes excluding Bards and Paladins.

Next on our Lost Ark Combat Engravings Guide is Cursed Doll. But similar to Grudge, Cursed Doll has a negative effect, which reduces the effectiveness of restoring your HP by 25% regardless of its level. Although, what you’ll get in return is pretty significant. At level 3, your base Attack Power considerably increases by +16%, making this Combat Engraving a must-have for DPS classes. Once again, I don’t recommend it for players who are still learning the mechanics of Dungeons and Raids since they’ll need sufficient healing to survive these tough encounters. 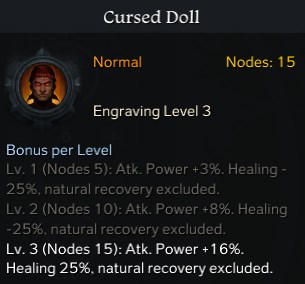 Now if you’re playing as a Mayhem Berserker, then Cursed Doll is perfect for you since it has little to no downside because your lowered max HP can easily be restored with a potion.

Alongside Grudge and Cursed Doll, Keen Blunt Weapon is one of the most sought-after Combat Engravings in Lost Ark. The reason for this is the significant increase in the amount of crit damage dealt at levels 2 and 3 of the engraving so you’ll want to equip it for classes that utilize Crit as their primary Stat. Examples include the Mayhem Berserker, Perfect Suppression Shadowhunter, Gunslinger, and Sharpshooter. 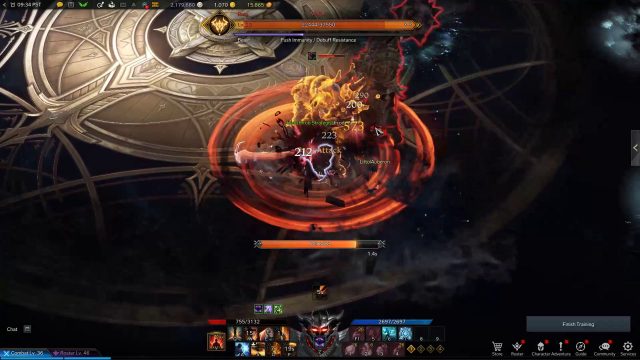 However, Keen Blunt Weapon also has a static downside like Grudge and Cursed Doll so it’s going to be more effective at level 3. In exchange for a considerable increase in crit damage that you deal against any type of monster, the attacks you do have a 10% chance to deal 20% less damage.

Adrenaline is equipped by classes with high Swiftness, including but not limited to the Gunslinger, Scrapper, Striker, and Wardancer. The reason for this is that the cooldown rates of their respective Skills are going to be much lower compared to the others that don’t have Swiftness as their primary stat. As such, they’re going to be able to use these skills more frequently. 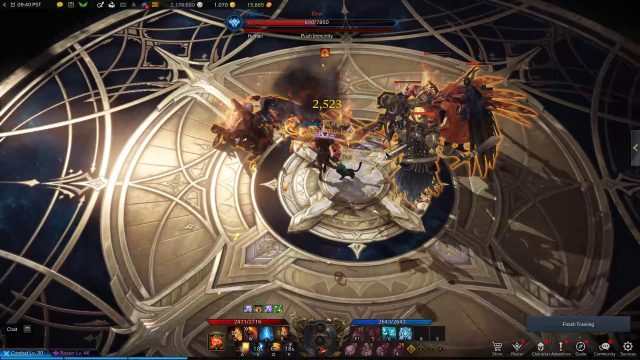 Remember that you don’t necessarily have to hit your targets but you need to activate abilities in quick succession to stack them to a maximum of 6 times, regardless of Adrenaline’s level. It can be challenging for some due to the amount of practice it takes but if you’re able to pull it off, especially at level 3, this not only increases your attack power by +1% per stack for a total of +6% but also significantly enhances your crit rate by +15%.

Ambush Master is a good Combat Engraving that amplifies your damage as long as you successfully execute Back Attacks, otherwise, you won’t be able to utilize the advantage it grants. What’s more is it doesn’t have any negative effects either unlike the ones we’ve previously discussed. Ambush Master is best equipped at levels 2 or 3 when your damage will be increased by +12% and +25%, respectively. Because of its nature, this Combat Engraving is suitable for classes with skills that grant Back Attack Damage bonuses. These include the Deathblade, Deadeye, Striker, and Berserker. 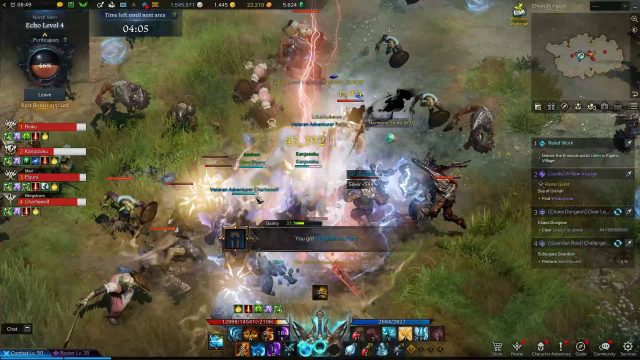 Hit Master is only applicable to classes whose skills don’t require position changes such as Frontal and Back Attacks. Examples are the Sorceress, Gunlancer, and Sharpshooter. The Hit Master is a decent and straightforward engraving for beginners because it improves the damage of Normal Skills. However, its bonus doesn’t apply to Awakening Skills. 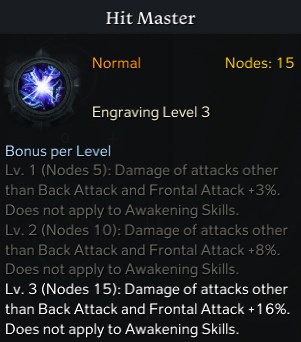 All-Out Attack boosts the damage you deal while improving the speed with which you cast Holding and Casting type skills, making it very useful for the Igniter Sorceress because of Doomsday, Explosion, and Punishing Strike Spells. At level 3, you’re able to deal +20% more damage. To gain the most out of All-Out Attack, you should at least have 4 Holding and/or Casting Skills, otherwise, you’re better off equipping other engravings. 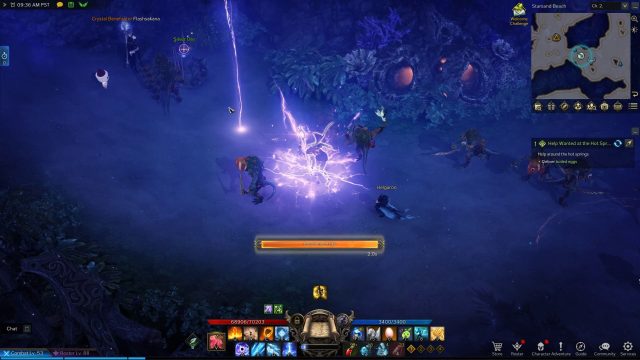 Precise Dagger is an excellent Combat Engraving to choose if you want to deal more critical strikes at the cost of dealing less critical damage overall. At level 3, this engraving adds a whopping +20% crit rate so this number, without taking into consideration your crit stat, will make 1 in 5 attacks crit, on average. The tradeoff here is that the critical hit damage will be 12% weaker. 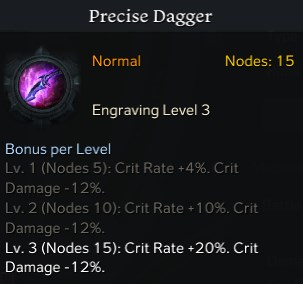 This downside can be offset by equipping Tripods to increase the critical damage dealt. One example is the Sorceress’ Frost’s Call and Punishing Strike. These two skills have access to the Final Strike Tripod, which greatly enhances their respective critical damage.

Expert is a must-have for the Paladin and Bard because it improves both their Shield and Healing capabilities, especially at level 3 at about +24%. Should your ally’s HP be equivalent to 50% or lower, the corresponding effectiveness increases by +12%. Do remember that this bonus also applies to the Shield and Healing that you use on yourself so you become tankier as a result. 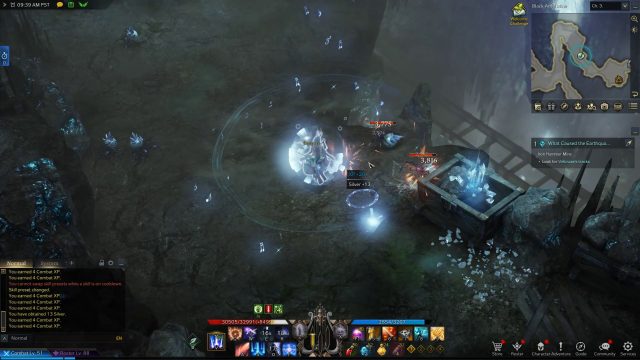 To be able to withstand the pressures in tough encounters, Paladins and Bards need to equip the Heavy Armor Engraving. This considerably amplifies your defensive stats, making you survive longer in combat. At level 3, defense is greatly enhanced at +100% and you become immune to defense reduction effects. Heavy Armor is one of the most important support engravings in Lost Ark because if you die, then the party’s survival rate goes down with you. 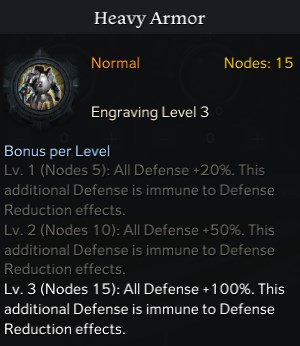 One might think that MP regeneration isn’t something to really invest in, considering that this resource restores rather quickly on its own. However, MP Efficiency Increase actually improves damage when your character’s MP is below 50%, up to +12% additional damage dealt. It’ll also passively grant up to +30% MP recovery at the 3rd level. 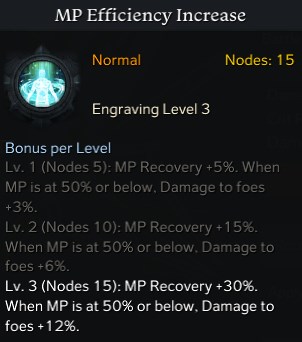 Support classes are obvious choices for the MP Efficiency Increase Engraving. However, Reflux Sorceress’ can also make great use of this, as their spammy skills’ nature gives notably reduces their overall MP. 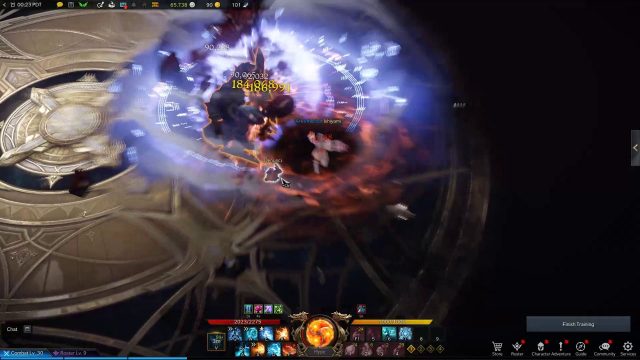 This is an exceptional engraving to use for support classes such as the Bard. Their Symphonia Awakening Skill deals a good amount of damage, but more importantly, creates a shield that absorbs damage for the entire party. It also grants them 1 bubble, which they can use for a clutch Serenade of Salvation to heal a dying party. Additionally, Awakening should greatly benefit you if you’re playing as a Soulfist since this Advanced Class has the strongest damage-dealing Awakening Skill in the game, namely World Decimation.

Another engraving that’s suitable for classes with high Swiftness such as the Berserker and Shadowhunter is Raid Captain. Swiftness improves movement speed, which you’ll be making use of to gain the benefit provided by Raid Captain. To make the most out of it at level 3, you need to consistently be at 140% movement speed. 45% of the extra +40% will determine the additional damage you deal. This is then equivalent to +18% more damage without any penalty unlike in Grudge or Cursed Doll. 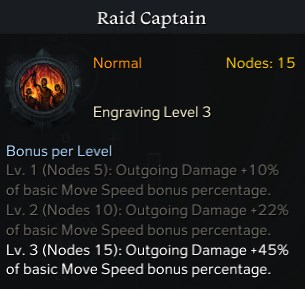 In addition to having a high Swiftness stat and move speed buffs, you may need the Spirit Absorption Engraving to further boost your movement speed. Note that combining Raid Captain with Spirit Absorption is beneficial to both DPS and Support Paladins and Bards alike.

Spirit Absorption might not look like an attractive option at a glance. At level 3, this engraving grants you +15% attack and movement speed. This is useful for classes that are either in need of additional movement speed or have less investment into Swiftness. Examples include the Bard, Shadowhunter, and Artillerist. 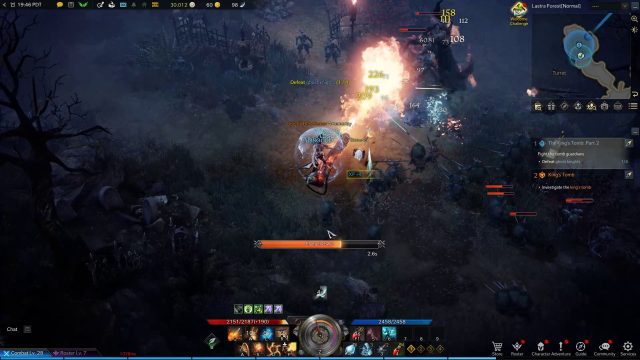 Another good thing about this engraving is that it can be useful for exploring Islands as you cannot use Mounts here, and the movement speed increase will allow you to get things done quicker, saving you precious time.

Stay tuned for more Lost Ark Endgame Guides and be sure to check out our Lost Ark Wiki or drop by our Twitch Channel if you have questions about the game. You can also check out our Build Guides like Shadowhunter, Sorceress, Sharpshooter, Paladin, Bard, Wardancer, and Soulfist. What did you think of this Lost Ark Combat Engravings Guide? What Advanced Classes are you enjoying so far? Let us know in the comments below!