With Pillars of Eternity 2: Deadfire now live, we’ve gotten to spend quite a bit of in-game time with the latest installment, the sequel to Obsidian Entertainments award winning CRPG Pillars of Eternity. One of the new features added, among many, with Pillars of Eternity 2 is the option to “Multiclass“. Multiclassing allows the player to choose a second Class with most of the bells and whistles that come with it. Multiclass characters aren’t as powerful in either Class as a Single Class character, however, the combination can potentially make them more effective overall. So the question is, should you Multiclass? Let’s take a look!

In order to answer this question I’ll need to explain to you some basics of the game’s mechanics so you have much clearer picture of how everything all works. First of all let’s talk a bit about Power Source and Power Level, and what this means for a character, since the decision to Multiclass or not will depend on these quite a bit. There are other factors of course, but this is the best place to begin. 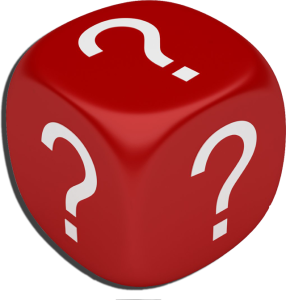 Each Class has it’s own “Power Source“. Barbarian, for example, has Rage. Rage determines the effectiveness of many of the Abilities in the Barbarian Ability Tree. Rage increases the number of Projectiles, Penetration and other effects, such as Duration and in some cases Damage. Increasing the effectiveness of Rage is called gaining a “Power Level“. This is the case with all Power Sources. Note that Power Level does affect the Damage of all spells that deal Damage. 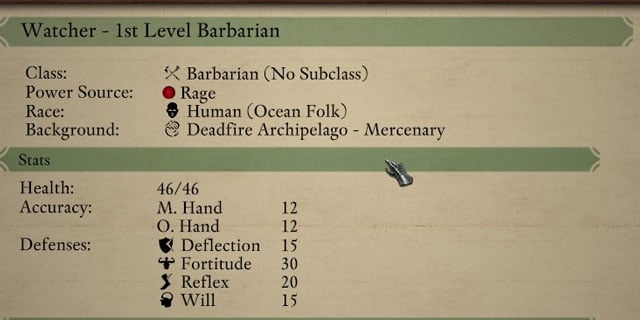 All Classes have a Power Source that is unique to them. Barbarians use Rage.

You gain a Power Level for each 2 levels you gain when you are Single Class. When you are Multiclass this becomes every 3 levels.This means not only will it take you longer to access higher level Abilities if you Multiclass, because you unlock the next tier of Abilities each time you gain a Power Level, but your Abilities will be less effective. This is one of the biggest downsides to Multiclassing, and it can make early parts of the game harder.

Secondly, Multiclass characters cannot access Ability Level 8 or 9 of either Class they play because their Power Level only increases every 3 levels instead of ever 2. This is another huge downside of a Multiclass character, because the best and most powerful Abilities are at the bottom of each Tree. Be sure to preview these Trees when making your character so you can see what you’ll be missing out before confirming during Character Creation. This alone makes a case for a Single Class character.

Each Class uses its Abilities with the Power Source Pool of that Class: Rage, Arcane, Discipline, Bond, etc. Abilities cost varying amounts of Power Source Points, which will replenish out of Combat. Instead of giving each Ability a certain number of uses like they did in PoE, now the player is free to decide how to spend his/her points in whatever combination makes sense for the victory. Wizards and casting Classes can only cast a certain number of each level of spell per encounter, but they no longer need to Rest to replenish these. Players can also use an Ability called “Empower” that will allow them to increase the effectiveness of an Ability or regain half of their max Power Source Points. This can only be used once per encounter per character and replenishes upon Resting. 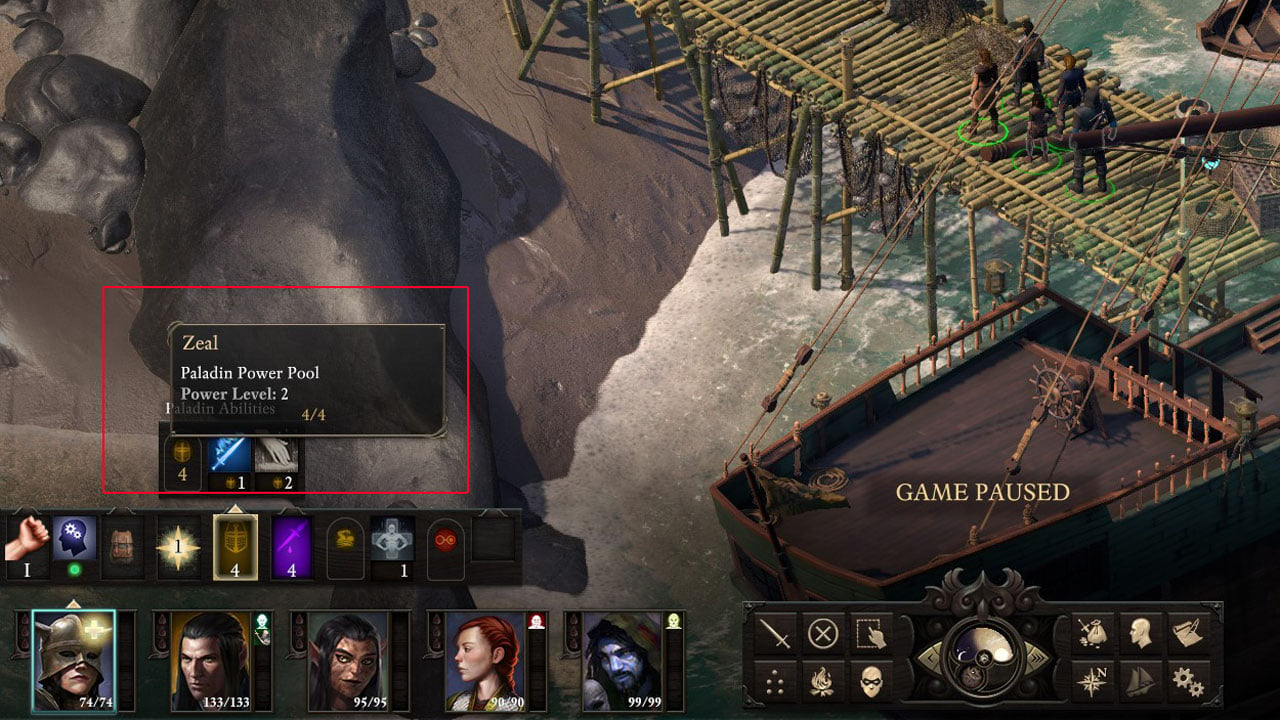 You can see in the level I have Paladin Power Level 2 and Rogue Power Level 2. This not only gives me access to Tier 2 Abilities from both Classes, but also an extra Power Pool Point (4).

Another important point to note is that when you create your character, it will start with a certain amount of Health, Deflection, Reflex, Fortitude and Will to begin the game. When you Multiclass you begin the game with an average of the 2 Classes you chose (rounded down). Each time you level up you will gain +3 to Deflection, Reflex, Fortitude and Will. Whether you Multiclass or play as a Single Class, it makes no difference. You will gain +3 to each per level.

Health is handled a bit differently. Each Class has a fixed amount of Health they begin the game with (Base Health), as well as a fixed amount they gain per level. When you Multiclass you average the Base Health of your two Classes and that is what they start with. Each time you level up you will gain an average of what those two Classes would have gained. Let’s do an example:

Skills are handled much the same way, and each Class in the game begins with a certain amount of points into each Skill. To calculate how many points in each Skill you will have, you simply need to add together the total points in each Skill for both Classes and then divide by 2. The exception being that Skill points added with Background are not affected by Multiclassing and will give their full value. 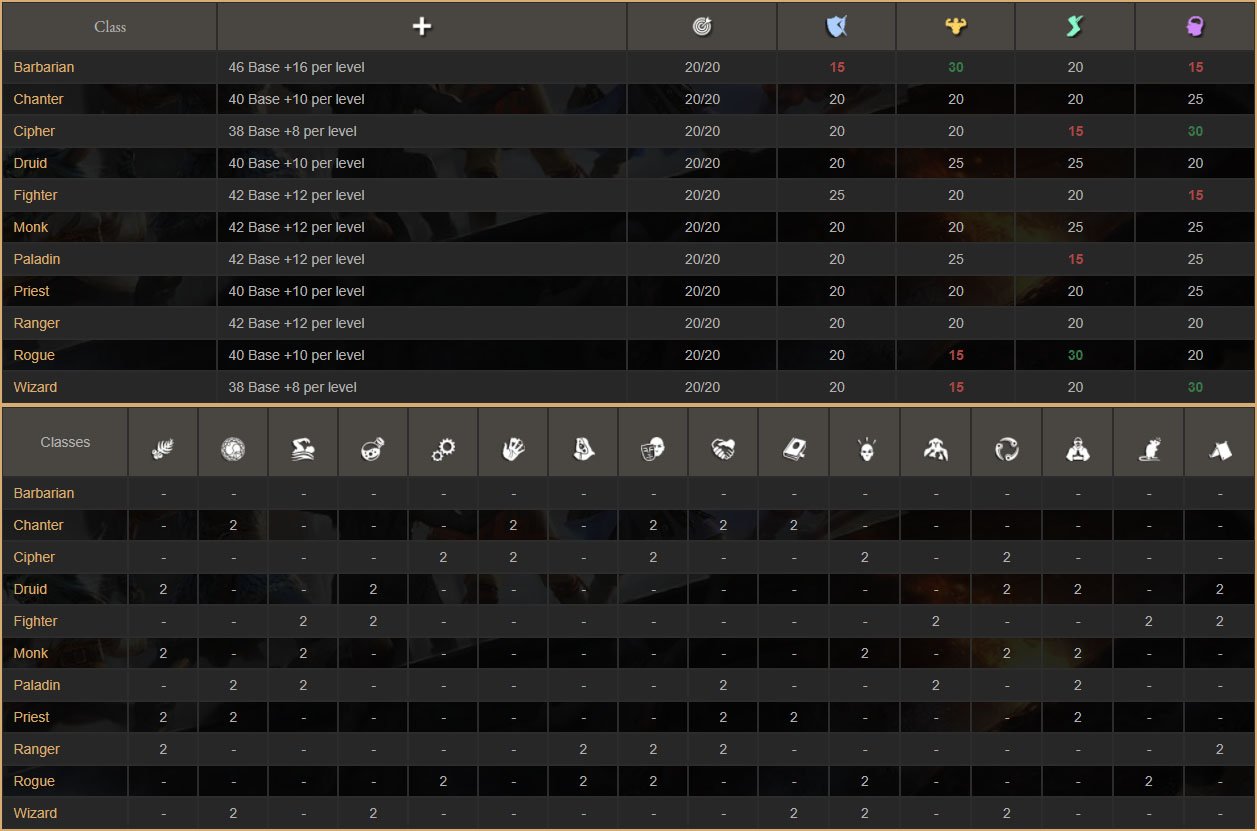 You can use these tables to calculate the Stats of each Multiclass without ever having to make one.

How Many Classes Can I Play at Once?

You can only have a total of 2 Classes when you Multiclass. This was done for balancing reasons, as well as to make sure each combination had its own identity.

Does it Matter What Order I Select My 2 Classes in?

No it does not. There is not a “Primary Class” and a “Secondary Class”. Instead both Classes are treated equally, no matter the order, until such a time as you begin Leveling Up and you decide. You can of course alternate 1 to 1 if you wish to have a balance.

If I Didn’t Multiclass in Character Creation, Can I do it at a Later Time?

This is a very good question, and unfortunately the answer is no. You cannot “unmulticlass” if you do not like your combination, but will instead have to start over.

Can I Still Pick a Subclass if I Multiclass?

Yes. You will be able to pick a Subclass for each Class you select. There is a total of 55 Multiclass “combinations” and if you factor in Subclasses that number gets WAAAAYYY bigger…

Do Single Classes and Multiclasses Get the Same Number of Ability Points?

No. Single Class characters will gain 1 more Ability Point than that of Multiclass Characters over the course of the whole game.

After looking it all over you can see that Multiclassing done well has a decent advantage over a Single Class character in many cases. They gain more Power Source Points to spend and they have access to two Ability Trees. However, if done wrong it can be ineffective and you might end up regretting your decision. This is the reason that the game doesn’t recommend Multiclassing for new players, and until you get the feel of the game’s mechanics (and have had some success) it’s probably good advice.

Now that we know what the bottom half of each Ability Tree will look like, be sure to check out what each Class’s Abilities are. Perhaps some of these Abilities will be so powerful that there’s no way you shouldn’t Single Class. My guess is that it will be a tough choice, all said and done, and one that many players will spend hours pondering (which is great). 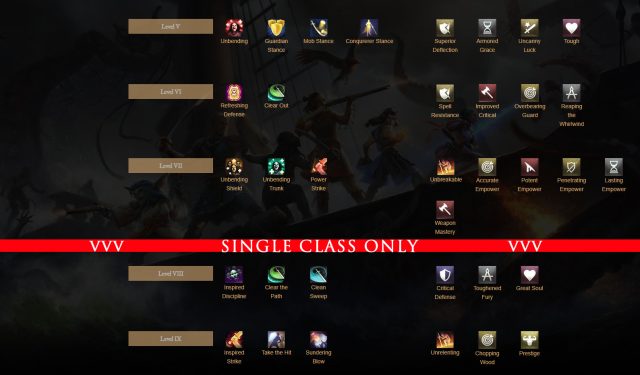 Be sure to study what the bottom 2 levels of each Tree are, because you cannot obtain these if you Multiclass.

Stay tuned for more Pillars of Eternity 2: Deadfire Class Guides as we cover all 11 Classes as well as Character Creation! What did you think of the Guide? Was it helpful? Leave your thoughts in the comments below.