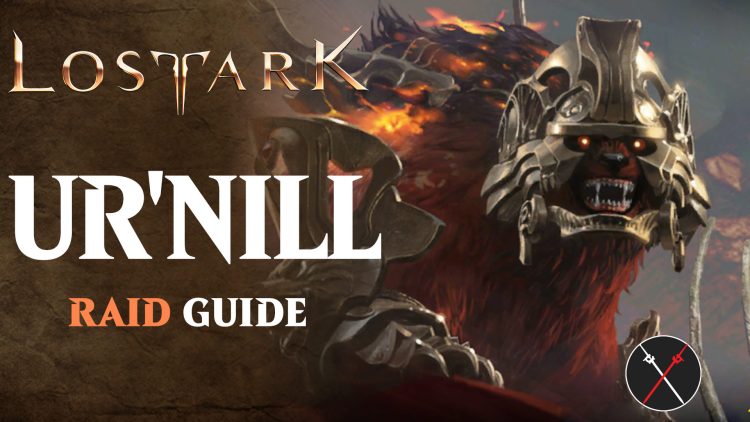 When you finish the main quest line for the continent of Shushire, your guaranteed Item Level will be 302, which would allow you to try out the first Guardian Raid boss in Lost Ark. Defeating Ur’nil will reward you with event coins, Rare Accessories, fragments, leapstones, and Rare Ability Stones, to name a few.

Regardless of whether or not it’s your first time to engage in these activities, it’s important to allocate the correct Tripods for your Skills. For instance, remember to select Weak Point Detection so as to increase the damage you deal against these push-immune Bosses. Next, you’re going to want to equip HP Potions or those that restore a percent of your HP back since they’re the only ones allowed in Guardian Raids. And finally, bring Flares in order to immediately identify where they are on the map so you can save some time.

Compared to the other Guardian Raid bosses in the game, Ur’nil has a predictable set of attack patterns due to his relatively slow movement speed. Additionally, most of his attacks are considered Frontal Attacks, making it easy to avoid them. Let’s first talk about Ur’nil’s charge attack followed by tips on how to survive the encounter.

One of the first things that Ur’nil will do is to prepare for a charge attack. But a few seconds before he does this, he puts his paws down and immediately changes his color to blue. Afterward, Ur’nil will then lunge at whoever is in front of him. What you or your teammates can do prior to the actual charge is to use a Counterattack Skill when you’re in front of him. Doing so will interrupt Ur’nil and render him staggered, leaving him vulnerable to incoming attacks. It’s also the ideal state you’d want the Guardian in because he will be immobile during this time so your support teammate can safely buff everyone as needed. 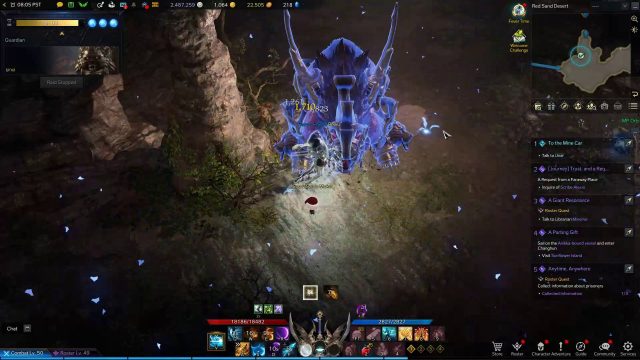 Conversely, if you don’t have a Counterattack Skill, you can simply dodge to the side to avoid his charge, otherwise, if he manages to get ahold of you, you’ll be thrown backward. But remember that he may soon turn around and leap on top of you, which brings us to the next basic attack.

Before Ur’nil leaps forward, he’ll move two steps backward so you have a split-second to dodge to the side to avoid the damage. If you don’t, you may also take another type of damage in the form of a swipe. Although, there are some cases when he no longer performs a swipe after lunging towards you. Note that leap is similar to charge except that you’re only able to counter the latter attack. 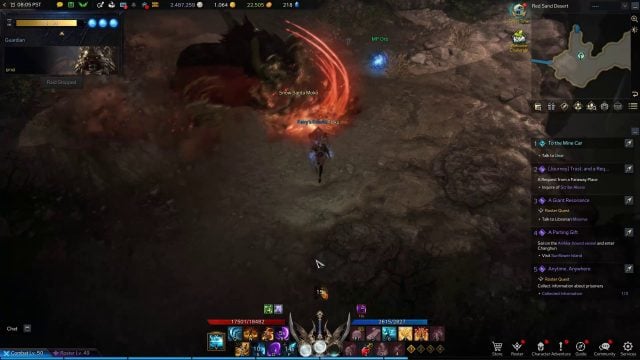 Ur’nil performs two types of swipes in addition to the one that he does during the leap. He regularly swipes at players in front of him or does the same two swipes followed by two faster ones, and then a slam attack in the end. Getting caught in the latter attack pattern will result in being momentarily staggered and knocked down. Also, take note that the slam’s AoE is conical in shape so try to dash to his side, if possible, to make sure that you avoid the damage. This is made more dangerous if Ur’nil executes a charge while you’re down. 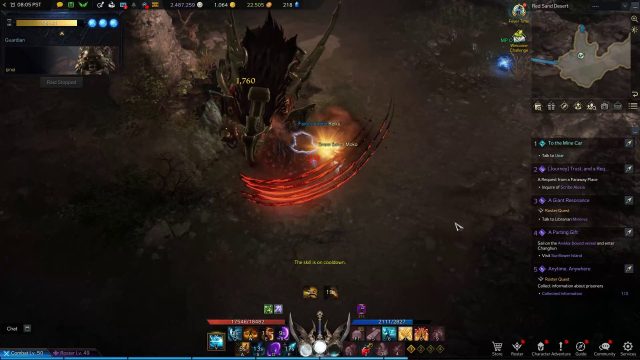 After a minute or two, Ur’nil will roar out into the open in preparation of turning into his enraged self, which will change parts of his skin to glow orange. While in this state, the Guardian is more powerful and faster when it comes to his leaps, swipes, and other attacks. In effect, these will all hit harder and more frequently than before. For instance, with an enraged leap, Ur’nil will send ripples of fire attacks in front of him when he lands on the ground, which can gravely harm your teammates positioned in front of him even if they’re not nearby. 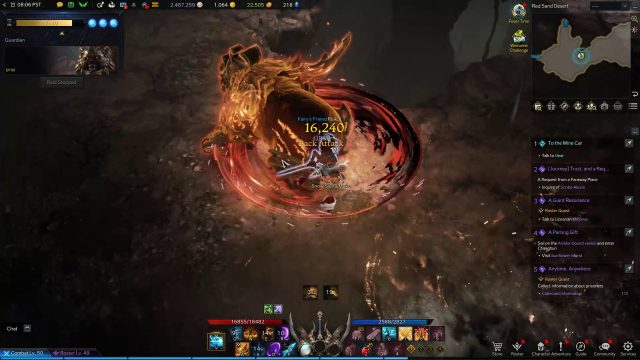 What also makes Ur’nil unique is his ability to conjure a fireball in front of him and hurl it over him towards his back to hit any of the players currently situated there. Thankfully, there’s a second to quickly react to this so make sure you’re not behind the Guardian when he’s in the process of throwing the fireball, otherwise, it’ll significantly damage you. 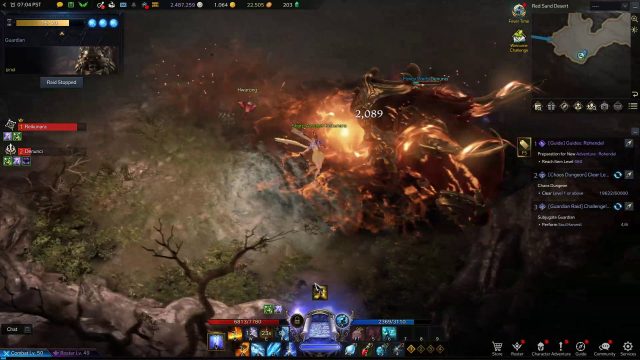 While enraged and if you haven’t sufficiently damaged Ur’nil, he will momentarily stop attacking only to stand up and slam his paws on the ground to initiate his earthquake special attack. This will then create a molten ring on the ground surrounding him that lowers your movement speed. At which point, you can either stay inside or dash away from it one moment before the devastating explosion. Shortly after, he will teleport to another section of the map. 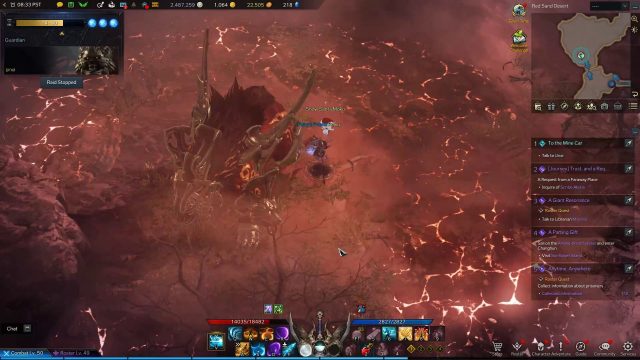 Ur’nil is one of the simplest Guardian Raid bosses in Lost Ark because the majority of his attack patterns are predictable and they don’t deal enough lethal damage to one-shot you. The main trick with this boss is to attack him from the back so that he doesn’t have a way to execute his swipes and leaps. But remember to be careful with Ur’nil’s fireball and earthquake special attacks as these can damage you even when you’re positioned behind him. 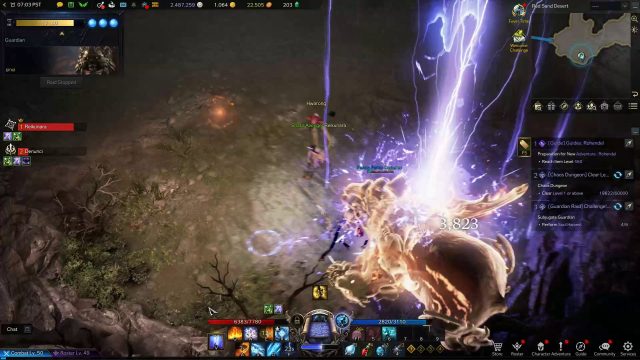 If you’re playing a melee class, you’ll want to stay at Ur’nil’s side or near his back to avoid his attacks. And if you’re playing a ranged class, you’ll mostly want to equip skills that can be instantly cast so you can efficiently damage Ur’nil. Sometimes while you’re casting a skill, he can suddenly decide to leap, which would result in a missed attack from your end.

Stay tuned for more Lost Ark Boss and Endgame Guides and be sure to check out our Lost Ark Wiki or drop by our Twitch Channel if you have questions about the game. You can also check out our recent endgame content including the Progression Guide, Best Ways to Get More Skill Points, and Best Combat Engravings. We also have Build Guides like Shadowhunter, Sorceress, Paladin, Bard, and Soulfist. What did you think of this Lost Ark Ur’nil Guardian Raid Boss Guide? Which bosses are giving you a hard time? Let us know in the comments below!