Welcome to the next installment of a weekly segment where we dive into one Elder Scrolls Online’s many Sets, and explore what sort of Builds you can make. Not only will we show you how to get the most from these Sets, but we’ll explain where to get them, what requirements there are to obtain them (if any), and everything else you could possibly want to know about them. This week’s Set is a Medium Armor Set that was added with the recent Clockwork City expansion this past month: Unfathomable Darkness. 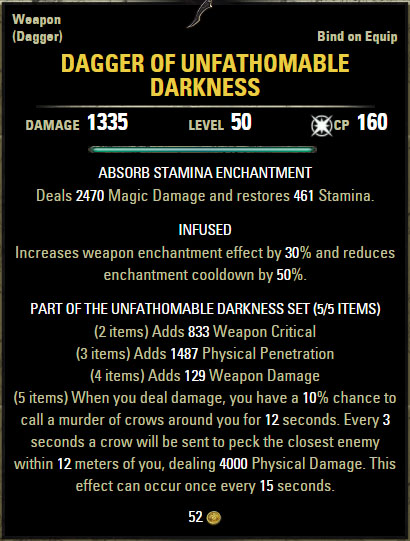 As with all dropped Sets you can find Weapons, Armor and Jewelry. One of the few Sets with Physical Penetration on it, which is great for PvP.

Unfathomable Darkness was introduced with the addition of the Clockwork City DLC (Update 16) in October/November of 2017. This Set can currently be acquired by defeating World and Delve Bosses, looting Treasure Chests and completing Quests in the Clockwork City region. This zone requires the purchase of the DLC or a ESO Plus membership. This Set is bind-on-equip, so it is also possible to purchase it from Guild Vendors or trade with other players who have pieces. The Style of Unfathomable Darkness is also newly added with the DLC, called: Ebonshadow Style and you can acquire Motifs of it by doing daily Quests in the region.

Since this is a Overland Set, you can get Weapons, Shields, Armor and Jewelry. The Traits on this Armor are random, so you may have to farm in order to get the ones that you need. The Jewelry comes in Robust, making this Set ideal for Stamina Builds. There are a few unique pieces out there as well that you can get from quests, but they aren’t any better or worse than those that drop Overland.

This Set does 4,000 Physical Damage at Legendary quality. If you add 100 points into Mighty and 100 points into Master-at-Arms, then Unfathomable Darkness will hit for 5600 per crow at Legendary quality. You get 4 crows, so that’s a total of 22,400 damage possible over 12 seconds if you are 100% optimized (or 1867 damage per second). Let’s take a look at how you can use this Set to best results. 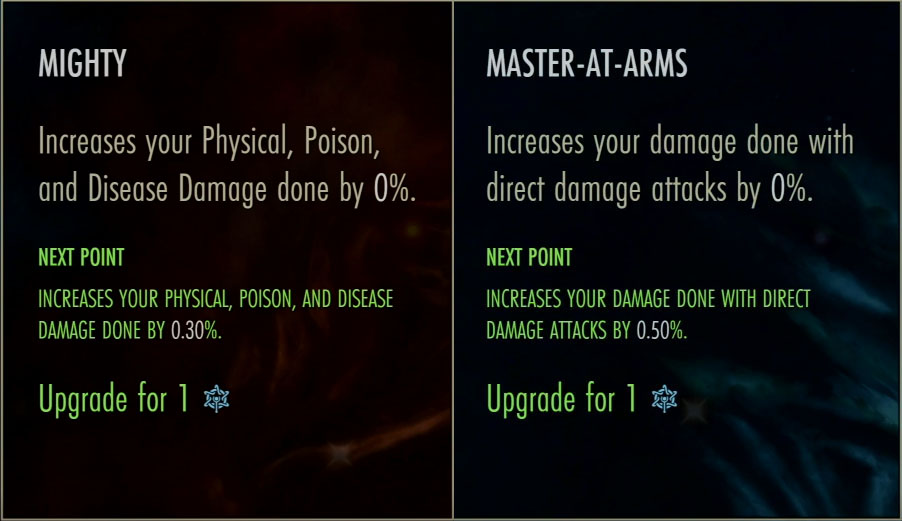 These two Champion Stars can increase the total damage per raven to 5600.

An important thing to note is that Proc Sets can no longer Critically Strike or Critically Heal as of Update 13 (Homestead) so as to reduce their effectiveness in Cyrodiil. In addition, many Proc Sets have cooldowns to keep them from being abused. When choosing a Proc Set to use, if you’re so inclined, you want to not only look at the effect, but how often you can apply it. Finding Sets with little or no cooldown is ideal, because it allows you to trigger them frequently. Unfathomable Darkness has a 15 second cooldown, however, it lasts 12 seconds. This means you have roughly a 3 to 4 second cooldown after it expires which isn’t bad.

How this Set works is that when you deal damage you have a 10% chance to summon a murder of crows (4) that circle over head and strike out one at at time to the closest target within 12 meters. It doesn’t matter if it’s direct damage, damage over time, an AoE, or a Light Attack, Heavy Attack or even Proc Set. Just any sort of damage and it will Proc. If there are no targets within range the crows will attacks nothing every 3 seconds until they are all gone so be sure to stay close to your opponent/enemy.

In terms of effectiveness, Unfathomable Darkness is much more effective than Mad Tinkerer, because it doesn’t seem to miss its target and does track. However, it does have a downside, which is that if you get knocked back and are out of range when the next crow is supposed to strike it will not hit anything. The good news though, is that as soon as you are back in range the next crow will. This makes this Set much less “risky” as even if one crow doesn’t hit anything because you are out of range for a second, you can still connect with up to 3 more. 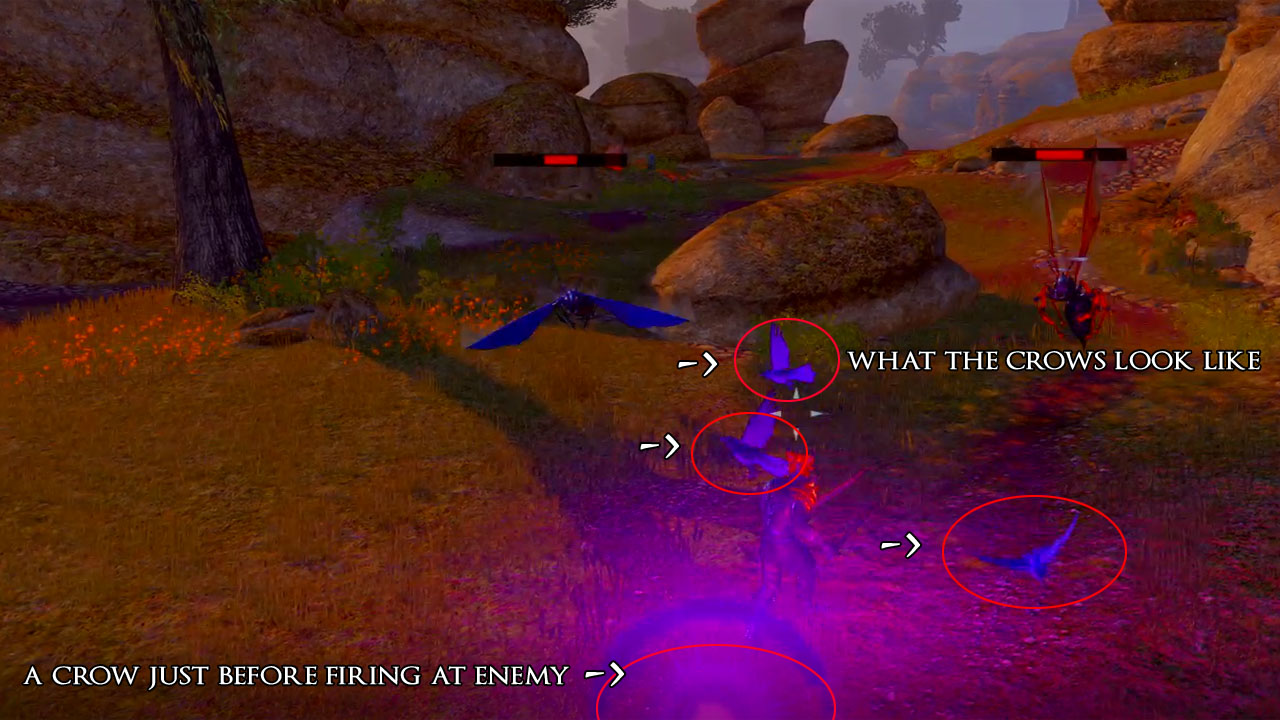 You can see 3 Crows plus the glowing purple ball at the bottom. That ball is the 4th Crow disappearing and firing at the nearest enemy.

One other thing to note is that the crows from this Set can be Dodged if timed properly.  It is rather easy to Dodge actually because a single crow strikes every three seconds, which gives you plenty of time to prepare. I’m not sure how many people would waste the Stamina to Dodge this attack 4x in 12 seconds, and it doesn’t hit overly hard against players (about 2000 against Light Armor). However, it is relevant information so I have added it here.

This Set probably isn’t the best for a PvE player because the proc only damages a single target as opposed to an AoE. However, with that being said, you can use this in PvE. Since it’s a Proc Set that procs off of damage ideally you’d have several AoEs that you can keep up on your targets and lots of DoTs if it’s a single target, like a boss you are fighting. Caltrops and Steel Tornado are both good choices, as well as Arrow Spray (as long as you are close).

This Set lacks Stamina, so be sure to pair it with a Set that has at least 1 bonus of Max Stamina or your pool will be lower than you’d probably like. There are quite a few Sets that have 2 Max Stamina bonuses as well. Some good choices include: Bone Pirate’s Tatters, Draugr Hulk and Quick Serpent. 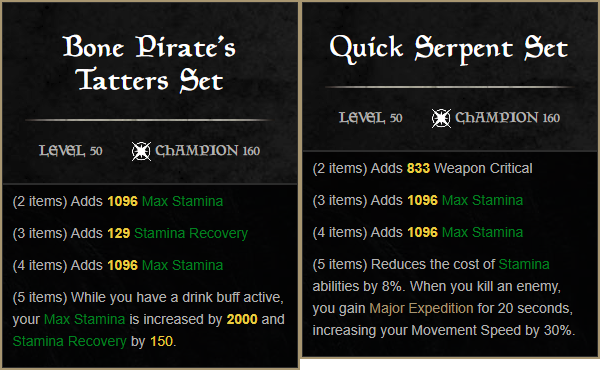 These are both good Sets that compliment Unfathomable Darkness. Quick Serpent is much harder to get, however.

Unfathomable Darkness works much better in a PvP scenario, where hitting your target is more difficult and you can pick to fight in smaller scenarios against 1 or 2 players. Since the Set has a 12m range you will need to be a melee Build in order to get the best use of it. Be sure to have a gap closer to you can stay up on your target so as not to waste any crows by being too far away.

Make sure you have several DoTs or a Poison you can apply to your target to keep this Set proccing often. Skills that strike the target repeatedly are also good (Flurry, Biting Jabs, etc). Because this Set alone cannot kill anyone, you might be best served by pairing this Proc Set with another, to help burst your opponent down quickly. Some such Sets include: Morkuldin, Domihaus or Velidreth. 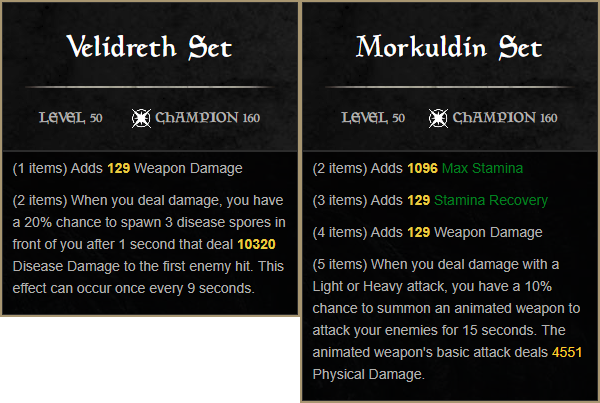 These are both good additions to this one for PvP purposes. Since Velidreth is a Monster Helm Set, you can actually use all three sets in conjunction.

Because this Set has Physical Penetration on it, which is rare for most Medium Armor Sets, you may not need as many point into the Piercing Champion Star if you are doing Trials or Dungeons (although you really shouldn’t be doing Trials with this Set). Be sure to find out how your group is setup and what Skills they are using to best determine the right amount of Phys Pen you need. Don’t waste DPS by having too much when you could be putting those points elsewhere.

Another thing you could do with this Set is back bar it with something like a Sword & Board and proc it and then swap while in PvP. This not only would allow you to control just when it goes off, but might also put some pressure on your opponent while you’re playing defensively, allowing you take the offensive. If you back bar this, be sure to use something like Agility, Shacklebreaker or Night’s Silence on your front bar to get the most when you are attacking.

Consider using this Set as a Werewolf or with a pack of Werewolves who all have it. You can RP a Druid from Diablo II and have quite a bit of fun! Can you image a bunch of Werewolves running around, all with a murder of crows flying above their heads? Would be pretty epic right? And since the crows seek out their targets, you’d be hitting people all over the place! 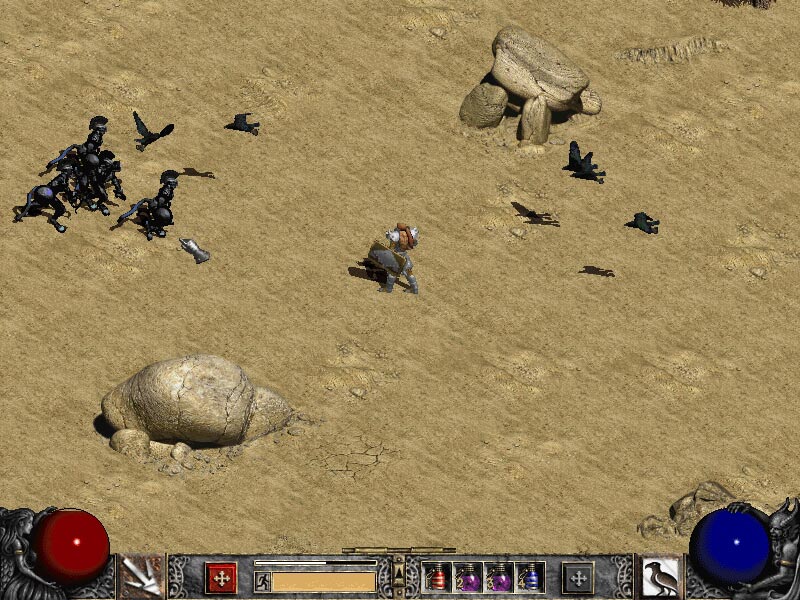 Looks somewhat similar doesn’t it? Wonder where it was inspired from…