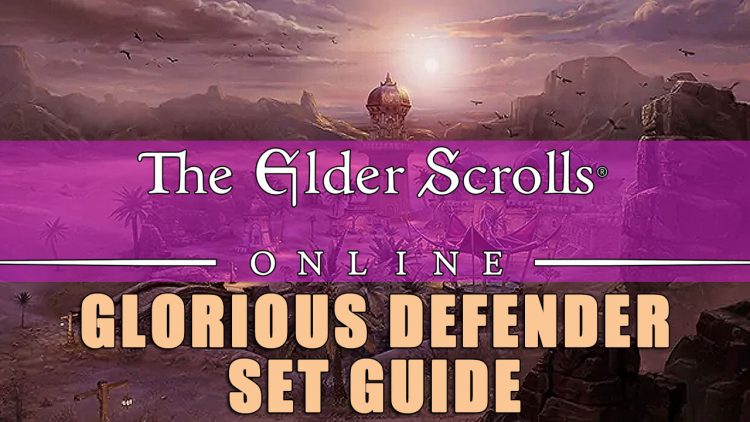 Welcome to another installment of a segment where we dive into one Elder Scrolls Online’s many Sets, and explore what sort of Builds you can make. Not only will we show you how to get the most from these Sets, but we’ll explain where to get them, what requirements there are to obtain them (if any), and everything else you could possibly want to know about them. In this article we will take a look at Glorious Defender Set which, when it procs, grants 100% Dodge chance against the next attack. 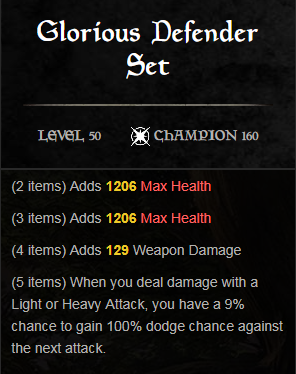 Strange Set that does not make much sense

This set was added with Orsinium Expansion that launched in November 2015. It added a lot of new content, including 18 new Sets, and Maelstrom Arena. The Glorious Defender Set drops from normal and veteran Maelstrom Arena, and each set item is bind on pickup, meaning you will have to run the Arena to obtain it. Set items come in the Trinimac Motif Style. This motif can be found by completing daily world bosses and delve quests in Wrothgar.

Weapon and Armor Traits are random, meaning you are likely to have to farm pieces for different Traits. It is a Heavy Set so enchantments on Armor and Weapon pieces are Max Health and Absorb Health. Jewelry comes with Healthy Traits and Health Recovery Enchantments. Keep in mind that you can use Transmutation to change Traits if you wish, however the Summerset expansion is needed to change Traits on Jewelry, along with 50 Transmute Crystals. 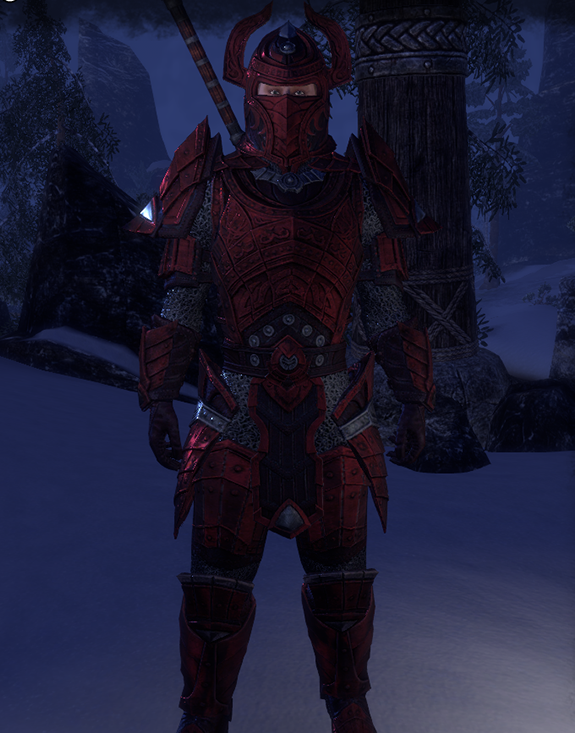 Glorious Defender increases Max Health by 2412 and Weapon Damage by 129 with 4 pieces equipped. The 5 piece set bonus grants a 9% chance to get 100% Dodge chance vs. the next attack. It is a set that can be used by almost everyone, but likely won’t see much use do to the extremely low proc chance.

An important thing to note is that Proc Sets can no longer Critically Strike or Critically Heal as of Update 13 (Homestead) so as to reduce their effectiveness in Cyrodiil. In addition, many Proc Sets have cooldowns to keep them from being abused. When choosing a Proc Set to use, if you’re so inclined, you want to not only look at the effect, but how often you can apply it. Finding Sets with little or no cooldown is ideal, because it allows you to trigger them frequently. Glorious Defender has no cooldown, which is ideal.

How this set works is whenever you hit an enemy with Light or Heavy Attack, there is 9% chance Glorious Defender buff will be granted, and this buff lasts for about 9 secs. The timer resets if the Glorious Defender buff procs again without the previous one being used. When the buff is active you will Dodge the next attack, and most attacks can be dodged this way. There is a subtle animation that shows when you Dodge, and it is illustrated by your character leaning back.

Upon testing, this Set seems to proc sometimes almost all the time, but afterwards it seems like it can’t proc at all. It is definitely RNG-based, so it is not reliable Dodge, unlike Dodge Roll which you can controlled at the costs Stamina. So it’s a trade off of sorts.

Most DPS rotations require the use of Light and Heavy Attacks, and that is where this set comes in. It can boost surviveability and it can trigger 5 piece set bonus from Nocturnal’s Favor and Tava’s Favor. The Dodge from this Set counts as a successful Dodge Roll, and that is why it can trigger bonuses from these sets. Glorious Defender is currently the only way to achieve this passive Dodge chance, as Major Evasion has been changed so that it reduces damage from AoE attacks by 25% instead. 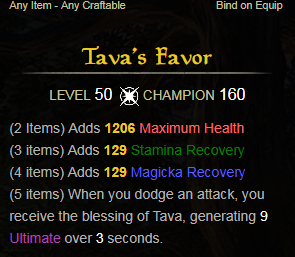 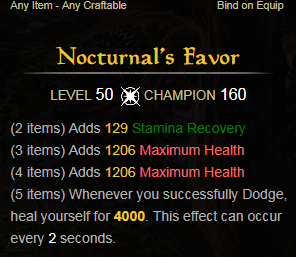 I tried some testing with a Two Handed Weapon, Lightning Staff and Werewolf Transformation to see if it increased the chances of triggering the Glorious Defender buff when doing splash damage with Heavy Attacks. However, there was no noticeable increase, though it is hard to quantify that since it is RNG based. In testing the proc chance for both heavy splash attack versus multiple enemies, and light attack versus only 1 enemy, I found it to be about 20%. Though I noticed no difference between the two, the proc chance seems to be way higher then what the tooltip suggests.

This set is almost impossible to find in PvE, as it should be used by DPS roles, but if you equip it then you lose a lot damage wise. Survivability is increased that way, but that is not something you want to be focusing on unless you are a new player. By equipping Tava’s Favor with Glorious Defender you will generate 9 ultimate over 3 seconds when you Dodge this way, which is quite a good boost to Ultimate gain. Blood Spawn and Balorgh monster helms would be  a really good addition for such a build. 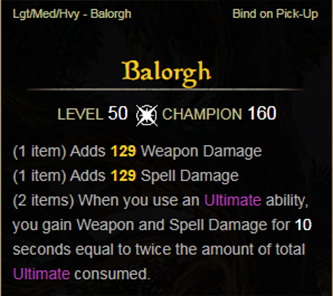 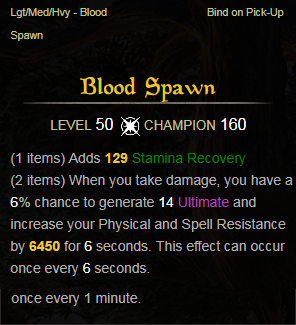 Blood Spawn has 6% chance to give 14 Ultimate points and increase Resistances when taking damage. It would be more for solo play because focus won’t be on you as DPS in group content. Balorgh is interesting in this combination for both solo and group play because it gives a buff that lasts for 10 secs which increases Weapon and Spell Damage equal to double of the amount of Ultimate consumed.

Werewolves are primary candidates for this set due to having slightly faster Light Attacks, which are core of their DPS. Equipping something like Blood Moon can increase the speed even further due to Frenzy buff, making Glorious Defender effective at all times because hitting more often means more chances of proccing. Adding Selene monster helm on top of that would add significantly more to overall DPS because it does high instant damage and has low cooldown of 4 secs. 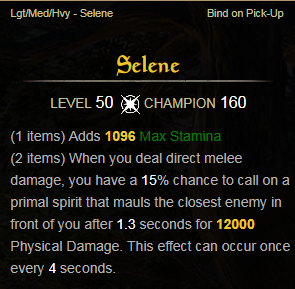 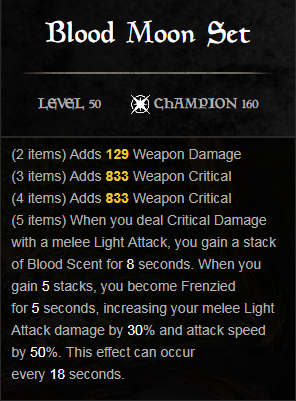 Overall, this set will find more use in Solo content than in Group play. If it was triggered by receiving and not doing damage then it would work great on Tanks, but it is not the case. Equipping only Rings and Weapons from Glorious Defender items would be most beneficial to get bonuses from Medium Armor Skill line. The same skill line also has the Shuffle ability that grants Major Evasion, which reduces damage from AoE attacks by 25%.

Glorious Defender is decent for PvP. Dodge is valuable in such an environment since it can save you from powerful attacks. It is not reliable, but when it procs it is oh so satisfying seeing other players miss with attacks that would otherwise hurt a lot, and it can save you from certain death with a bit of luck. However, to make it effective, you still need to hit enemies a lot with Light or Heavy Attacks. Consider pairing it with other Sets that boost the effectiveness of your Light and Heavy attacks, or combining that with Meridia’s Blessed Armor can be quite powerful. By making enemies blind they will miss every attack for 5 secs. While very good for PvP this Meridia’s Blessed Armor has no use in PvE because most bosses can’t be blinded. 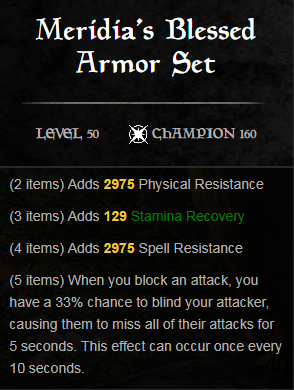 Glorious Defender is an interesting set that makes almost no sense. It increases surviveability, but at the same time can be used somewhat effectively only in DPS builds. You are trading a lot of DPS for a random chance of getting a Dodge, and it isn’t a very good trade off. That is why in PvE it will almost never be used, unless playing solo, where you need surviveability. When you are the tank, DPS and healer, like in Maelstrom Arena, then this Set may come in handy.

Due to fast Light Attack speed, Werewolves are perfect choice for this set

While less effective in PvE, it is quite the opposite in PvP where it has its uses in annoying other players, and saving you from potentially devastating attacks. Make sure your rotation uses Light Attacks in order to get the most from this Set. Consider playing as a Werewolf to get faster Light Attacks, increasing your procc frequency.