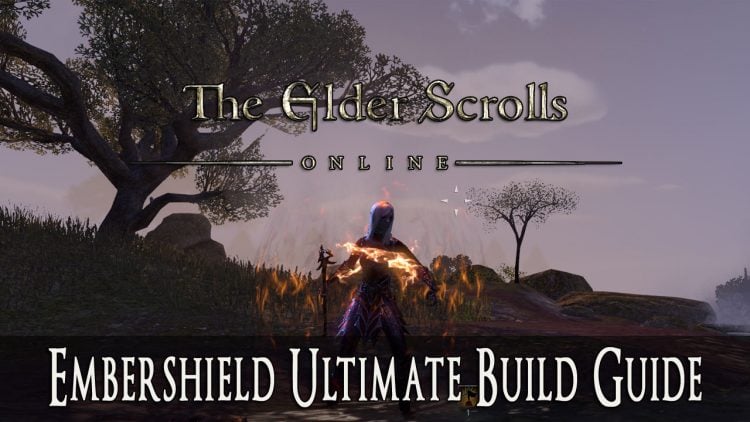 Welcome to the fifth installment of a weekly segment where we dive into one Elder Scrolls Online’s many Sets, and explore what sort of Builds you can make. Not only will we show you how to get the most from these Sets, but we’ll explain where to get them, what requirements there are to obtain them (if any), and everything else you could possibly want to know about them. This week’s Set comes in Heavy Armor and isn’t used all that often by anyone: Embershield. 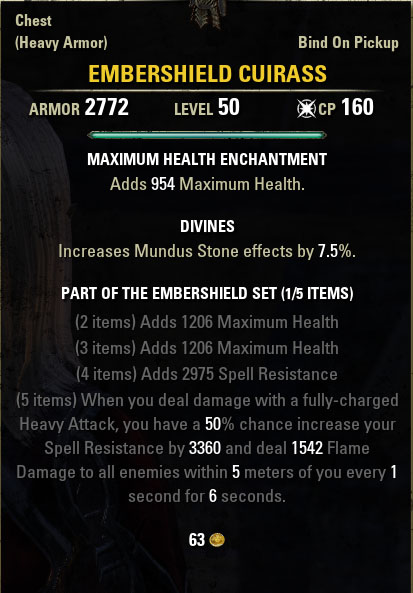 This set only comes in Heavy Armor with Health bonuses, making it more ideal for a tank sort of Build, but still possible to be utilized by Magicka and Stamina Builds.

This Set was introduced with Update 5 back in November of 2014 when Veteran City of Ash was added to the game. This Set’s bonuses have never changed since it’s introduction and it can currently be found in City of Ash I or City of Ash II (both Veteran and Normal versions). This Dungeon is part of the base game so there is no need to purchase any DLC or be an ESO Plus member to have access to it.

Since this is a Dungeon Set you can get Embershield Weapons, Armor and Jewelry. The Traits on these pieces are random, so you will need to farm the ones you need (or use the new Transmutation system to change them). The jewelry for this Set comes in Healthy, which is best suited for a Tank sort of Build. If you are attempting a PvP Build with this Set then you’ll probably want to wear Heavy Armor or at the very least use at least 1 piece of other Jewelry that has Magicka or Stamina. 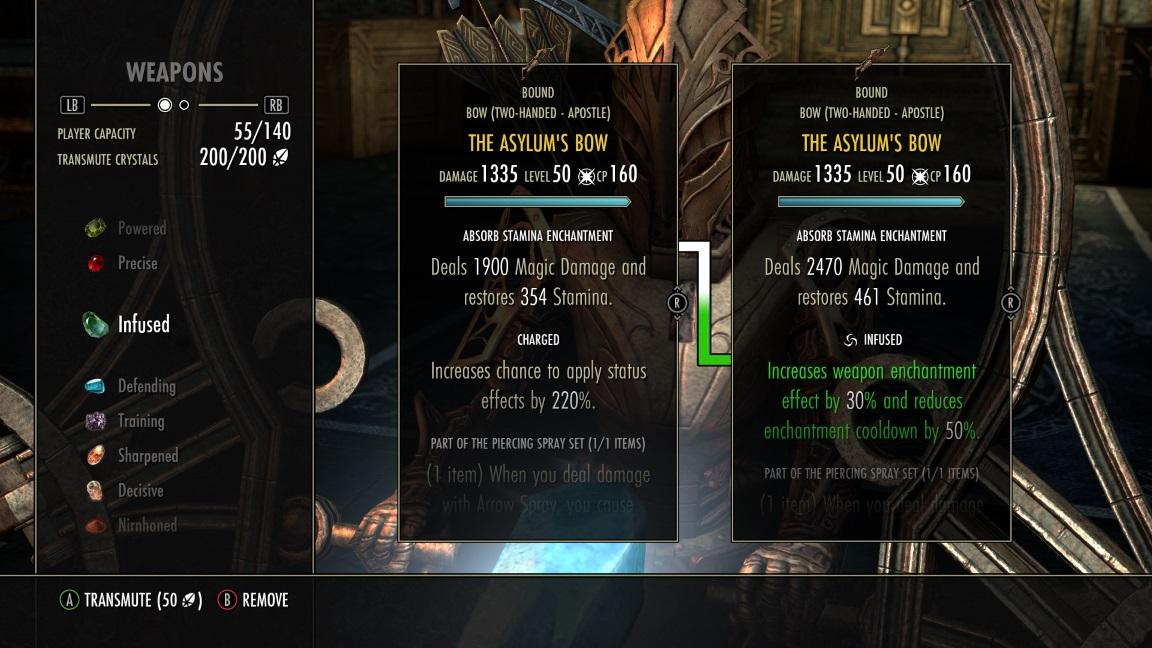 The new Transmutation system coming in Update 16: Clockwork City will allow you to change your Traits in exchange for 50 Transmute Crystals.

The highest damage I was able to get this Set to do was 1542 per second on the tooltip at Champion Rank 160 and Legendary quality. In order to reach that high I needed to be a Dark Elf and a Dragonknight, so players playing other Races or Classes will not be able to obtain that much damage from this Set. The Spell Resistance given by the Set does not change by improving the quality, and as long as you are the same level as the gear it will always give 3360 Spell Resistance.

An important thing to note is that Proc Sets can no longer Critically Strike or Critically Heal as of Update 13 (Homestead) so as to reduce their effectiveness in Cyrodiil. In addition, many Proc Sets have cooldowns to keep them from being abused. When choosing a Proc Set to use, if you’re so inclined, you want to not only look at the effect, but how often you can apply it. Finding Sets with little or no cooldown is ideal, because it allows you to trigger them frequently. Embershield is one such Set and has no cooldown. It can also be refreshed during its duration, if you just sat there and Heavy Attacked you could probably keep it up permanently.

How this Set works is: whenever you do a fully-charged Heavy Attack you have a 50% chance to gain the Embershield effect, which increases your Spell Resistance and deals Fire Damage around you. Since this Proc Set has no cooldown you can get this effect with no down time in between, and can even refresh the effect before it expires, allowing you to keep it permanently if you just Heavy Attack.

One thing I noticed that was particularly interesting when testing this Set, was that I had a near 100% success rate when using a Restoration Staff or Lightning Staff vs. a Fire Staff or Frost Staff. I’m not sure why, but something to do with the channeling Staves seems to give the Set more “chances” to Proc than ones that don’t. This also goes for regular melee Weapons and Bows. Because of this I recommend you use either a Restoration or Lighting Staff when trying to Proc this Set. 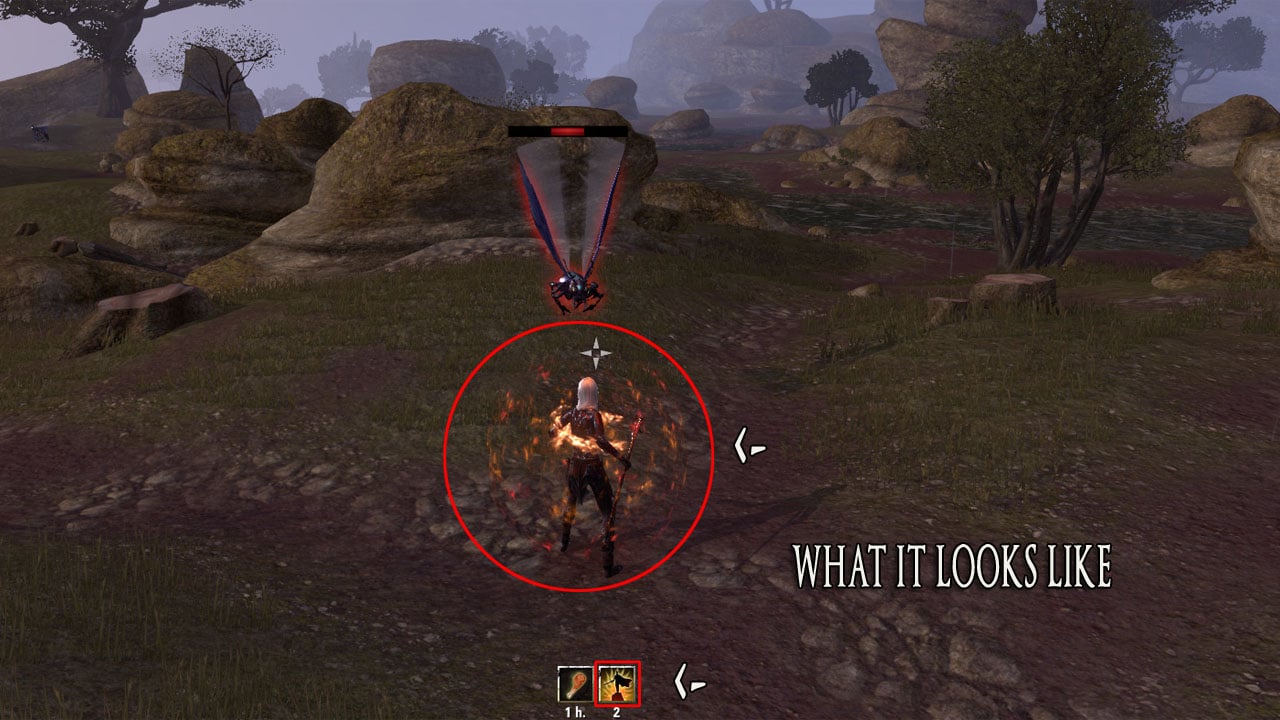 Embershield looks nearly like a damage shield when it Procs. You can see the flames wrapped around my character inside.

This Set cannot Critically Strike, as mentioned above, nor can it set the Burning Status Effect on targets hit by it. The Embershield effect does, however, remain if you swap Weapons to another Set (breaking the Set) for the duration of the remainder. This means that ideally you would back bar the effect and then swap to your front bar to crank out some damage, or block with a shield, as the effect continues to deal damage. This Set can also Proc Burning Spellweave.

Master-at-Arms and Elemental Expert in the Champion System both affect the damage this Set does, so consider utilizing a sort of Build that uses these Champion Stars if you want to use this Set. That doesn’t mean you cannot play this Build with Stamina, but it will be more effective with a Magicka. The base damage of this Set with no points in anything that would increase it is: 1032 (at Legendary), so you can only increase it by about 500 damage. The average player would probably have a damage value somewhere between 1200-1400.

I can’t see anyone other than a Tank using this Set in PvE because of the lack of Magicka or Stamina and the large amount of Health you get from it. Tanks using this Set should consider how to optimize its effectiveness because it has a 5 meter range. One way to help pull in targets is to use Fiery Grip from the Dragonknight Skill line or perhaps use the Monster Helm Set: Swarm Mother, that pulls enemies to you when you block their attacks (specifically ones more than 5 meters away).

Tanks could potentially use a Frost Staff on their back bar to taunt their target and Proc Embershield simultaneously, and then switch back to their Sword and Shield, or simply could tank with a Frost Staff. Frost Staves also can apply Minor Maim, which reduces the damage an enemy deals by 15%, which is very useful to Tanks.

Whether you’re playing this Set with a Stamina or Magicka Build, you’ll have an exceptionally large amount of Health. If you use the Heavy Armour and not the Jewelry, you’ll have less Health and more Magicka or Stamina. You’ll also do less damage, have less recovery, and less cost reduction. If you use the Jewelry and a Weapon or Armour, you’ll have more Health, but you’ll still be able to maintain the 5 piece bonuses of either Light or Medium Armour. I recommend using the Jewelry in this case. 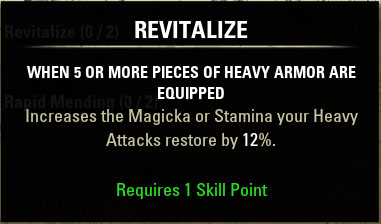 One reason to use Heavy Armor might be the Revitalize passive skill that increases your resources returned when Heavy-Attacking.

PvPers should have either a Lightning Staff or Restoration Staff on their back bar that they use to Proc this Set at range before closing to melee distance and putting pressure on your opponent. It’s probably a good idea to put a Weapon and Spell Damage enchant on it as well, so you buff your damage and heals at the same time. And, because you’ll need to do a fully-charged Heavy Attack quite often to keep this buff up as much as you can, you probably won’t need a whole lot of recovery, which will allow you to have high Weapon or Spell Damage.

Your rotation should look something like Heavy Attack, Gap Closer (hopefully a CC as well), CC if none on Gap Closer, DPS Skill, and then DPS Skill or Heavy Attack depending on your target’s Health. Having a Monster Helm Set like: Grothdarr can really help put the pressure on between these two Sets ticking while you DPS. Refresh Embershield when you get an opening, usually after you have CC Immunity and repeat.

When using this Set try not to worry about how much damage it deals and don’t try to maximize it with Champion Points, because you might gimp your character overall in doing so. Instead put your points where they normally would go and you will be more effective when using this Set.

This Set will increase your Spell Resistance by a large margin, but if you’re already in Light Armor, you’ll have a huge disparity between Spell and Physical Resistance. Consider adjusting your Champion Point to help compensate for your weakness to physical attacks. The Spell Resistance also helps out a lot if you’re a Vampire who takes more damage to fire.

Try to stack AoEs when using this Set to get the most benefit from it. Using Monster Helms, like Grothdarr, that do AoE damage as well, help to melt large groups of enemies. Use AoE abilities like Wall of Elements, Blazing Spear, Liquid Lightning, etc; and really pile on the damage. Whether your a Tank in PvE or PvP, doing so can help soften your enemies so that others can finish them off.