The Adrenaline Rush Build has very good burst damage by using one of the best, if not the best Skill Gift in Chariot Rush. It does 10% more damage than Circulating Pulse, and executes in a fraction of the time, allowing you to sneak it in without taking damage. This is a Halberd exclusive Gift, so you cannot use it with any other weapon time. Additionally, you can combo Shadow Assault onto the end of it for an extra 10,000 damage (at level 100), or just use it when you need it.

There are several Halberd type Blood Codes in Code Vein, and you won’t begin the game with them all. In this section I’ll discuss which Blood Codes to use while you are working your way to your final destination: Scout. First up is the most obvious one: Fighter.

Fighters have decent Strength and Dexterity Scaling, giving you the means to use any early game Halberd effectively. It has a terrible Stat spread for all the buffs you’ll need, but luckily you won’t have them all so early on. Upgrade to Prometheus as soon as you can.

Prometheus has B or higher in every single Stat, with both Dexterity and Mind being B+. What more can you ask for? Use this one until you gain Queenslayer, as it is likely the best early game Blood Code.

Once you finish your own personal memory you’ll gain the Queenslayer Blood Code, which is perfect for this Build. It features both good Dexterity and Mind Scaling, and has enough of the other Stats to use all buffs we want. It also contains the best buff in the game in Final Journey, but even without this buff, it still outperforms any other Blood Code for a Dexterity-based Halberd except Scout. This means you’ll be doing near maximum damage, even when you’re not using Final Journey, and it’s just the icing on the cake.

Scout is what you’ll be using out on the landscape because it has Quick mobility by default, and will allow you to use Noble Silver and still be Quick if you’re using the Impaler. It also has a high max Ichor, and this build is very Ichor hungry because of the Skill Gifts that are spammed. Just be sure to swap to Queenslayer during boss fights for extra damage.

At end game I have a few setups. First, I like to just generally explore using the Noble Silver Blood Veil. It’s the second lightest in the game, and when combined with an Alleviating Impaler you will be in the Quick mobility range. This will keep your damage roughly the same as a normal Impaler, because we use Swift Destruction, but will give you those uber dodges.

Second, I like White Vestment when fighting Bosses and weight doesn’t matter because of Final Journey, which makes you quick no matter how heavy you are. Swap these around depending on what you are currently doing, or what Boss you are facing. Some times having the extra burst from Noble Silver is worth it. 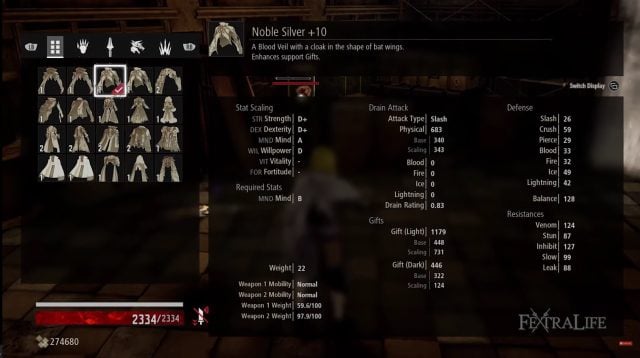 For this Build I like to use two different Weapons: the Impaler and the Argent Wolf Poleaxe. The Impaler is a Spear, and it has an exceptional moveset. It allows you to attack more quickly than many One-Handed Swords, which prevents you from getting caught in long twirly animations that can get you killed. Additionally, it is the lightest of the Poleaxes, which helps you reach that Quick mobility more easily.

The Argent Wolf Poleaxe hits the hardest of any Dexterity scaling Polearms I have tested, but it has an absolute shit moveset and it’s quite heavy. However, if you are simply using it with Chariot Rush, you can take down things in one combo much more easily. Pull this bad boy out on hard to kill targets and burn them down quickly, then swap back to the Impaler. Note that if you find yourself using this weapon more, then you should use Queenslayer instead of Scout. 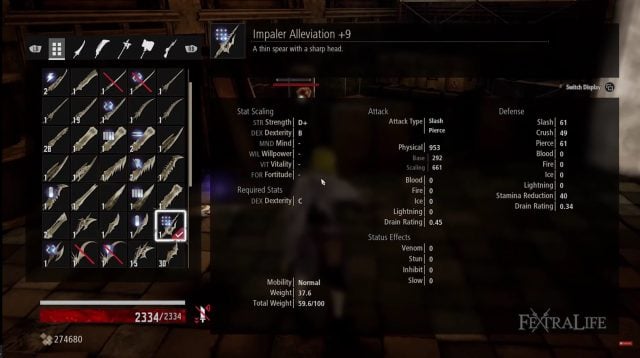 Gifts play a vital part of any Build, but even more so in a build that relies heavily upon them, like this one. There are a number of excellent Light Gifts, many of which are defensive, however for this Build, we’ll focus primarily on the offensive ones. We will also be using two Skills I have not put in any other Build.

Gifts initially can only be used with the Blood Code that they are part of, but as you use them in combat you will “master” them, and then you can use them with any Blood Code. There are both passive and active Gifts, and I’ll cover which are good in both categories for a Adrenaline Rush Build. You can only have 4 Passive Gifts equipped at one time, and 8 Active. Let’s begin with the recommended Passives first: 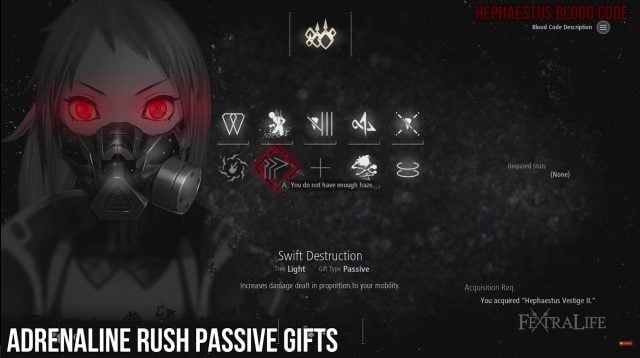 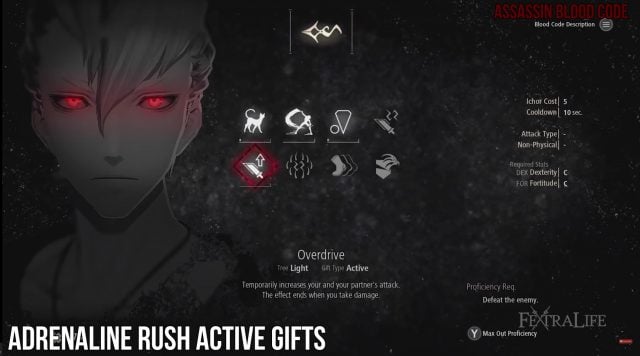 Out of all the Builds I have made this one may have the highest sustained DPS. Halberds have excellent “Stagger” build-up when they strike, particularly the Impaler, and this allows you many more openings to attacks enemies than you might usually get with One-Handed Weapons. Consider adding Tirelessness if you find you are running out of Stamina on some Bosses to help keep up the onslaught.

Chariot Rush is cheap at 4 Ichor, and is only barely outperformed by Dragon Lunge, which can’t be used with Halberds. It also hits more reliably, because it has better tracking, which makes the Halberd not only faster than a Two-Handed Sword per attack, but means it has roughly the same burst potential if you used properly. You can also dodge out of Chariot Rush if you don’t think you can pull off the last strike without getting hit, making it very flexible.

Lastly, the Obliterator Axe works exceptionally well, but it uses Strength scaling, which isn’t ideal because Queenslayer has more Dexterity Scaling. Still if you’d rather use it than the Argent Wolf Poleaxe because of its shitty moveset, you can do so with only a small loss in damage. If you decide to use it, use Ishtar as you make your way through levels for better damage, and then swap back to Queenslayer when you reach Bosses. 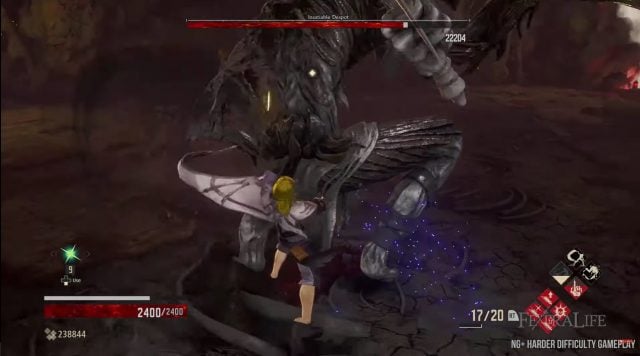