In this Code Vein Build Guide we’ll explore just exactly how you make the Bayonetta Overdrive Build, which is a Bayonet DPS Build that focuses solely on ranged combat. How do you get the most from your Weapons, Blood Veils, your Blood Code, and your Gifts? Well that’s exactly what we’re going to cover, and how they all fit together to create the Bayonetta Overdrive Build.

The Bayonetta Overdrive Build is extremely straightforward, easy to use, and Ichor efficient. You don’t have to spend too much time buffing with this Build, and while other Builds may pump out more “per shot” damage, they come with the drawback of having to manage a ton of Gifts to make this happen. You will sacrifice about 25% damage per shot, for ease of use, and for less complication. If you want to be a ranged Bayonet user, this is a fantastic Build to use.

There are several good Bayonet Blood Codes in Code Vein, and you won’t begin the game with them all. In this section I’ll discuss which Blood Codes to use while you are working your way to your final destination: Queen. First up is likely not obvious: Caster.

The reason we select Caster first for this build is because it has the highest max Ichor, which allows for the most shots to be fired before running out. And because it has the best Willpower and Mind Scaling of the 3 starting Blood Codes. Fired shots from Bayonets scale off these two Stats, with modestly better scaling in Willpower than Mind. Oddly enough, this allows Bayonet users who play only ranged to also cast just about any Gift in the game.

You will see a huge improvement when you make this jump, which should be after the Invading Executioner Boss fight. Better Willpower Scaling will help with damage tremendously, and you still maintain that high max Ichor. You’ll use this Blood Code until you gain Harmonia.

Harmonia has better scaling in both Willpower and Mind, which will increase your overall effectiveness with ranged shots, and has the exact same weight limit as Artemis. You’ll use Harmonia, which you gain from returning the memories of Eva, until you gain Queen at the end of the game.

Queen gives you A Scaling in both Willpower and Mind, which is a bit less Willpower but a good amount more Mind than Harmonia. In my testing this out performs Harmonia by a small margin, but you also gain a higher weight limit. This will allow you to use heavier Blood Veils or Fortify your weapon for improved damage and still remain Quick.

Blood Veils play a very important role in the effectiveness of Gifts. Your Blood Code and Blood Veil work together to determine how strong your buffs are, with your Weapon having no impact here. However, this Build uses no buffs that are impacted by Scaling, so what Blood Veil you use for this Build is more about the Defense Values, and how much damage it deals with Drain Attacks, Parries and Backstabs. Select a Blood Veil that keeps you just under the weight limit to be Quick with whatever Blood Code you use.

At end game I like to use Night Claw, which is actually found pretty early on. It has exceptional Drain Attack damage, and it has modest protection. It keeps you below the weight limit for Quick and allows you to Fortify Brodiaea and still be under 50% weight. However, you can also use Noble Silver, and this will allow you to do the same for Libertador as well, but provides less protection. 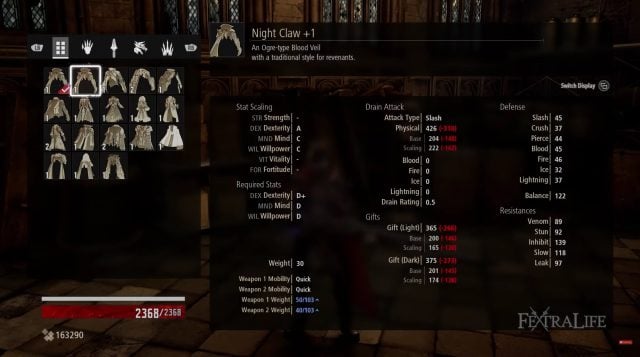 For this Build you’re going to obviously be using a Bayonet, and you want to focus on Bayonets that have more Willpower and Mind Scaling than Dexterity or Strength. As mentioned before, this is because your per shot damage is only affected by Willpower and Mind. The standard Bayonet is a good choice for early game.

Once you gain Mia you’ll want to trade for her Bayonet, Brodiaea as quickly as possible. This is the best long-range Bayonet in the game, and if you can lock on to your target you can hit it. Range is very much an issue for Bayonets, and even though this gun doesn’t hit the hardest, it will allow you to land shots when you might not otherwise.

Additionally, once you gain Eva, you should trade with her to gain her Bayonet, Libertador. It has much shorter range than Brodiaea, but hits for about 25% more damage per shot. You’ll alternate between these, using whichever makes the most sense. If you don’t need range, then default to Libertador. 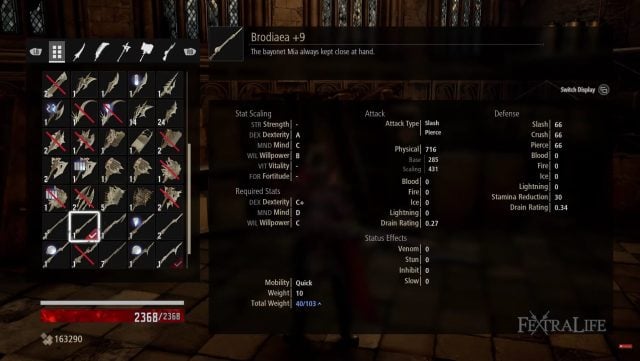 Gifts play a vital part of any Build, but even more so in a build that relies upon them, like this one. There are really only a few Gifts that work well for this Build, making it rather simplistic in nature. Gifts initially can only be used with the Blood Code that they are part of, but as you use them in combat you will “master” them, and then you can use them with any Blood Code. There are both passive and active Gifts, and I’ll cover which are good in both categories for a Bayonetta Overdrive Build. You can only have 4 Passive Gifts equipped at one time, and 8 Active. Let’s begin with the recommended Passives first: 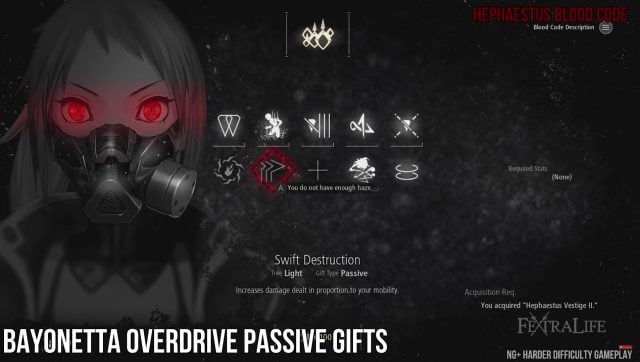 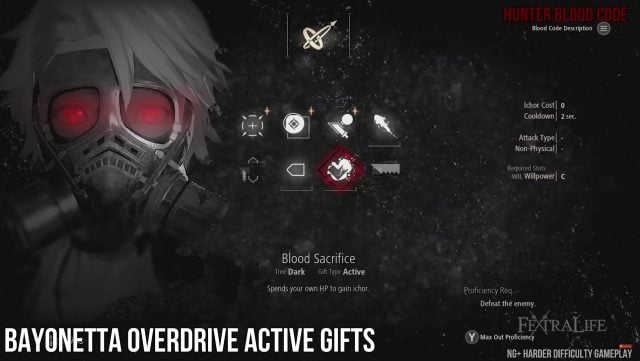 Because you will have high Willpower and Mind, you can add spells to this Build that have higher burst damage. That way you can use the Bayonet when you just need steady DPS, and you can use Spells to burst things down quickly. Play around with the many Dark and Light damaging Gifts and see what best compliments your style of Bayonet play.

Bridge to Glory adds not damage to your ranged attacks with this setup, and you will not meet the requirements for Adrenaline, so there is no other way to really boost damage with regularity unless you use Final Journey and the Queenslayer Blood Code. The problem with using this setup, is that Queenslayer does not have as good of Mind or Willpower Scaling, so you’re only going to see about a 25% improvement in damage. This doesn’t seem worth it to me, to be on a 3/4.5 minute timer, when you can just play with out it and shoot things once or twice more and not have to worry about it. 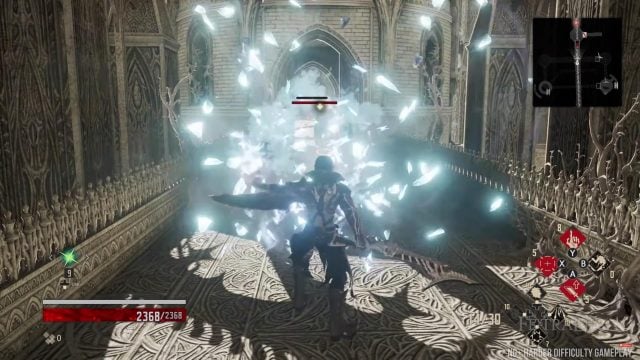 Remember to Backstab when you can or Drain Attack to increase your Ichor count. You will hit very hard with these attacks with this Build, so gaining Ichor and wrecking your opponents at the same time is just win/win. Do so as often as you can.

Lastly, weapon buffs that apply elemental effects like Blood, Fire or Ice have no impact on ranged shots, so there is no need to slot any. Bayonets have terrible melee attack animations anyway, that often miss their targets, so if you plan to play using a Bayonet you’ll want to avoid doing so as much as possible.