In this Code Vein Build Guide we’ll explore just exactly how you make the Judgement’s Shadow Build, which is Two-Handed Sword DPS Build that can kill just about anything in a single stroke, all without being seen. How do you get the most from your Weapons, Blood Veils, your Blood Code, and your Gifts? Well that’s exactly what we’re going to cover, and how they all fit together to create the Judgement’s Shadow Build.

The Judgement’s Shadow Build is a combination of Buffs that all stack together to get extraordinary damage in a single swing, killing targets instantly. In addition, it prevents you from being seen, allowing you to take out targets right in front of the face of other enemies without drawing aggro. This Build is intended to get you through levels easily, and is effective on Bosses, just to a lesser degree.

There are several Two-Handed type Blood Codes in Code Vein, and you won’t begin the game with them all. In this section I’ll discuss which Blood Codes to use while you are working your way to your final destination: Hades. First up is the most obvious one: Fighter.

Fighters have B+ Scaling in Strength and B in Dexterity making them a good choice early on. They also have a decent amount of Ichor at 16, allowing them to cast more buffs than either Berserker or Atlas. However, you will need Gifts from both of those Blood Codes, so consider using them for a short while to master the Gifts needed there.

Once you have access to Prometheus you’ll see an increase in just about all your Scaling, and your Ichor will increase to 20, which will help with buffing. Mind Scaling isn’t ideal here, because Mind will affect nearly every buff you use, but it isn’t terrible. It also has one of the best stat spreads in the game, so take advantage of it.

Hades has some of the best Strength Scaling of any Blood Code, but will not do quite as much damage per swing as Prometheus all said an done. This is because you will not quite be able to meet the Mind requirements for Bridge to Glory, which will take about 10% off your per hit number. However, it will allow you to use Flashing Fang, so that you can get superb one shot damage against harder to kill foes. It also means that you have one less buff to worry about, simplifying the build a bit.

For end game I strongly suggest using the White Vestment as it will buff your Light Gift damage quite a bit and has exceptional Defense. Noble Silver would be even better, but you won’t meet the requirements for it with this setup unfortunately.

For this Build you’re going to want to use a Two-Handed Sword of some kind, dealing maximum damage with each swing. You’ll often be able to one-shot enemies, even harder ones if you are properly buffed. Zweihander is good early on as it doesn’t have great scaling, and Prometheus doesn’t have amazing Strength Scaling. You’ll eventually want to get Judgement Edge, this weapon hits the hardest out of any I tested, and works well for this Build because it takes advantage of Hades’ very high Strength Scaling.

Make sure to Fortify your weapon with an Atlas Chrome to increase its damage even further. You’re already going to be overweight, so it’s not an issue. You don’t need to worry about speed here, just making sure things die in one hit. 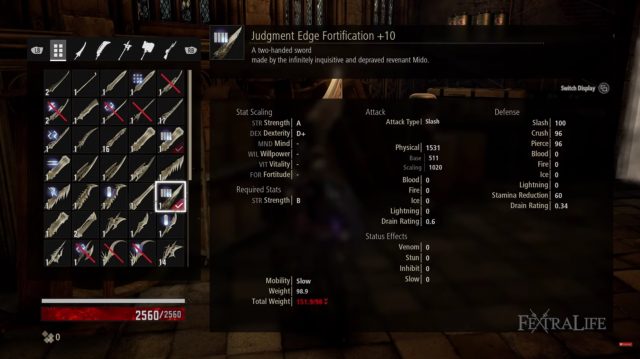 Gifts initially can only be used with the Blood Code that they are part of, but as you use them in combat you will “master” them, and then you can use them with any Blood Code. There are both passive and active Gifts, and I’ll cover which are good in both categories for a Judgement’s Shadow Build. You can only have 4 Passive Gifts equipped at one time, and 8 Active. Let’s begin with the recommended Passives first: 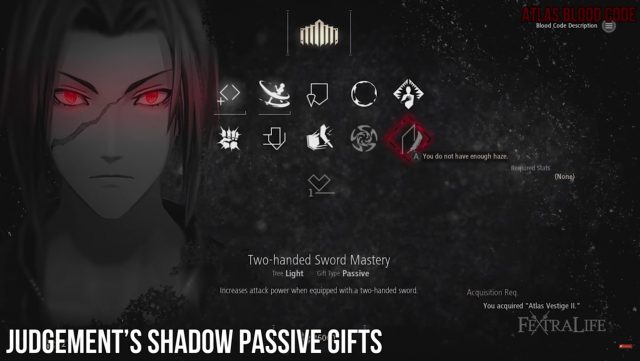 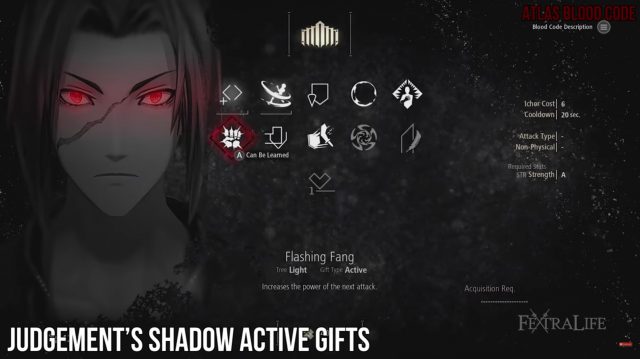 Make sure you keep Night Fog Veil up at all times! You can’t be seen by enemies that you are not attacking easily with it on, even if you’re standing and fighting right in front of them. Be sure to wait for it to recharge before heading into a hostile area with more than one enemy, so that you can get the drop on them and not have an “oh shit” moment when it wears off mid fight.

You’ll need to master a ton of Gifts to use this Build, so start doing this as you make your way to Hades. Either use items to bypass the XP needed or use them and get there quickly, but spend some time to get them either way. This Build is much more effective with all its parts, and you may struggle otherwise.

Even though it seems like this Build is an Ichor hog, which it is, you gain tons of Ichor from smashing enemies in the face unchecked. You should have more than enough to keep your buffs up, and still use some Skill Gifts along the way. 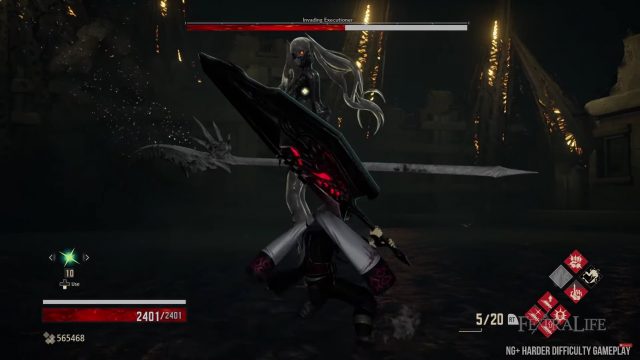 Be sure to keep your HP under 50% once you gain the Survival Instinct passive, as this will help boost your damage. Since you shouldn’t be getting hit, there is very little risk involved.

Lastly, consider using Queenslaver and Final Glory for Boss fights, as this is not a strong point of this Build. By doing so you will boost your damage even further, and this should help you down Bosses much more easily. Also, swap out Survival Instinct for Swift Destruction when doing so. This will boost your damage without having to keep your HP low.