In this Code Vein Build Guide we’ll explore just exactly how you make the Immortal Blade Build. How do you get the most from your Weapons, Blood Veils, your Blood Code, and your Gifts? Well that’s exactly what we’re going to cover, and how they all fit together to define your character’s “Tank” Build.

When you first begin playing Code Vein it can be a bit overwhelming. The explanations are there to a degree, but there is a ton of numbers and information to wade through, and none is really necessary to begin playing. So if you’re like me, you put it aside and set about killing enemies until you get stuck. But when you have a problem what do you do? Well that’s what this Guide is here for!

If you wish to play a “Tank” Build in Code Vein then you will be focusing heavily on your Defense and Balance, so that you can take hits and keep on swinging. You will also need high Strength, since it not only adds damage to your attacks, but also increases your max HP. Vitality and Fortitude are also important, as these stats improve physical and elemental defense, so make sure you have a good amount. 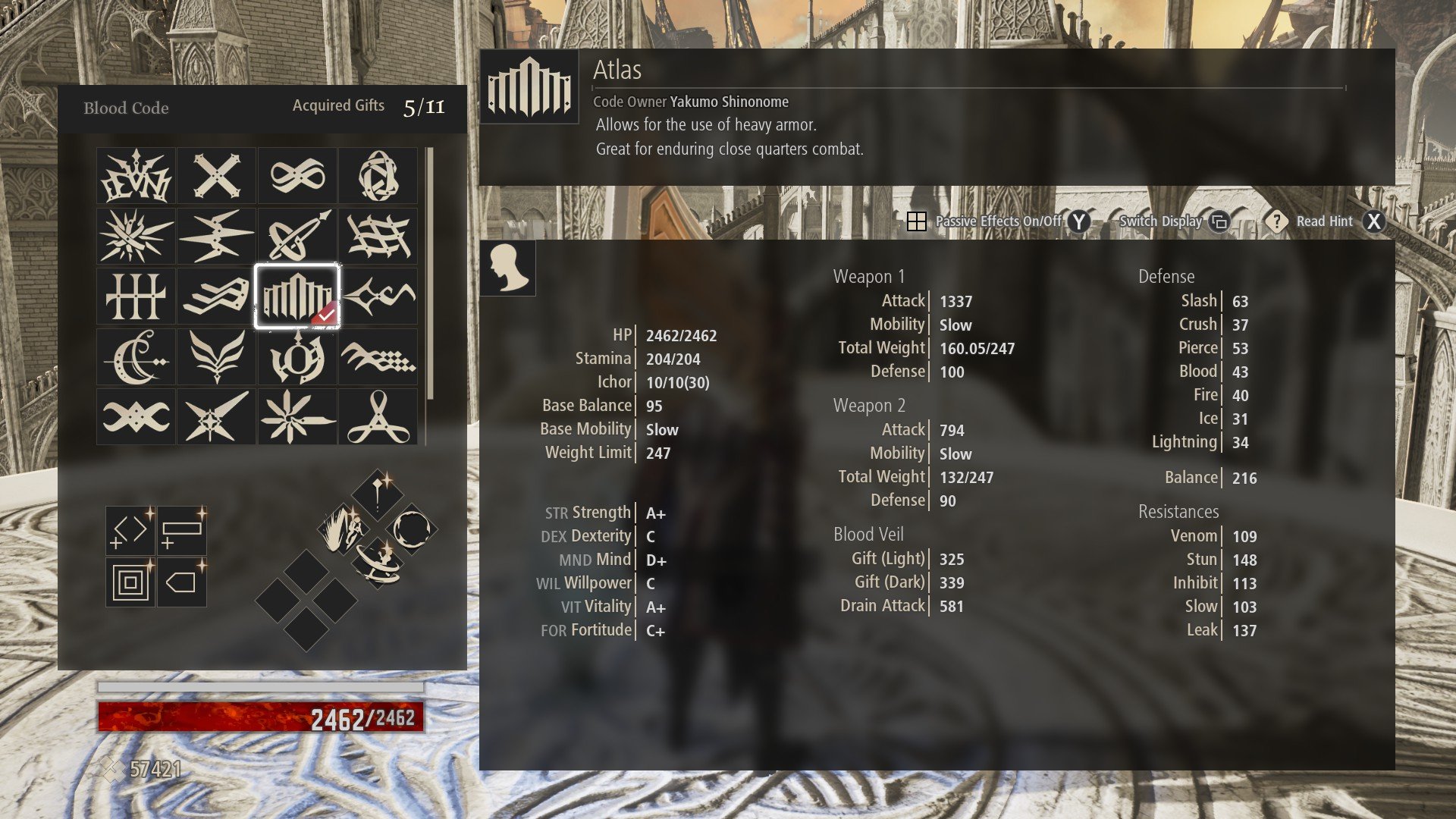 Your Blood Code is going to be the backbone of your Build, and will determine how “Tanky” you are. In this section we’re going to take a look at some of the early game Blood Codes that work well for the Tank archetype. Let’s begin with Fighter, since it’s the first one you get.

Fighters are in the middle of the pack for warrior archetypes though they have the strongest Light Gifts, and have a decent amount of Ichor. They stagger easily, due to low Balance (Poise), and have low HP by comparison, meaning they are not suited for Tanking in the long term. Swap out this Blood Code for Berserker as soon as you get it if you wish to Tank.

Berserker, like Atlas, is intended for a slower tankier warrior type of player, which is exactly what we’re looking for. It features high HP, and tons of Weight so that you can use heavier Weapons and Armor, and still roll as Normal with the right setup. Its high amount of Balance allows you to take hits without being interrupted, which is outstanding. It also has the most Stamina of any Blood Code you’ll find for a very long time, allowing you to attack, block and dodge longer without issues, though only a bit more than Atlas. Use this Blood Code until you gain Atlas.

Atlas gives you the tankiest setup you can get until much later in the game, with a solid amount of damage output to boot. It has the highest HP, Weight and Balance of any Blood Code in the first half of Code Vein. Once you get it, use this one until you get more advanced Tank Blood Codes like Isis or Fionn, and have to decide if you wish to sacrifice hard hitting weapon attacks for some spells.

You can use other early game Blood Codes to tank, but you may find it more difficult. The lack of Balance, Stamina and max HP that they generally have, mean that you cannot tank as effectively, before you’ll be forced to dodge or likely die. If you plan to Block just some of the time, then consider using any of the others.

When selecting your Blood Veil you’ll want to pay attention to Balance, Defense and Weight. These three things, besides the requirements, will determine which is the best for you to use at the moment. The more Balance you have, the less likely you’ll be interrupted when attacking and you can just trade blows if needed. The higher your Defense the less damage you will take from attacks of various types when not Blocking, and these will vary a bit from Blood Veil to Blood Veil. Lastly, Weight will impact your Mobility, and you may want to have Normal rolls. If this isn’t an issue and you plan to “tank” every attack, then don’t worry too much about this. 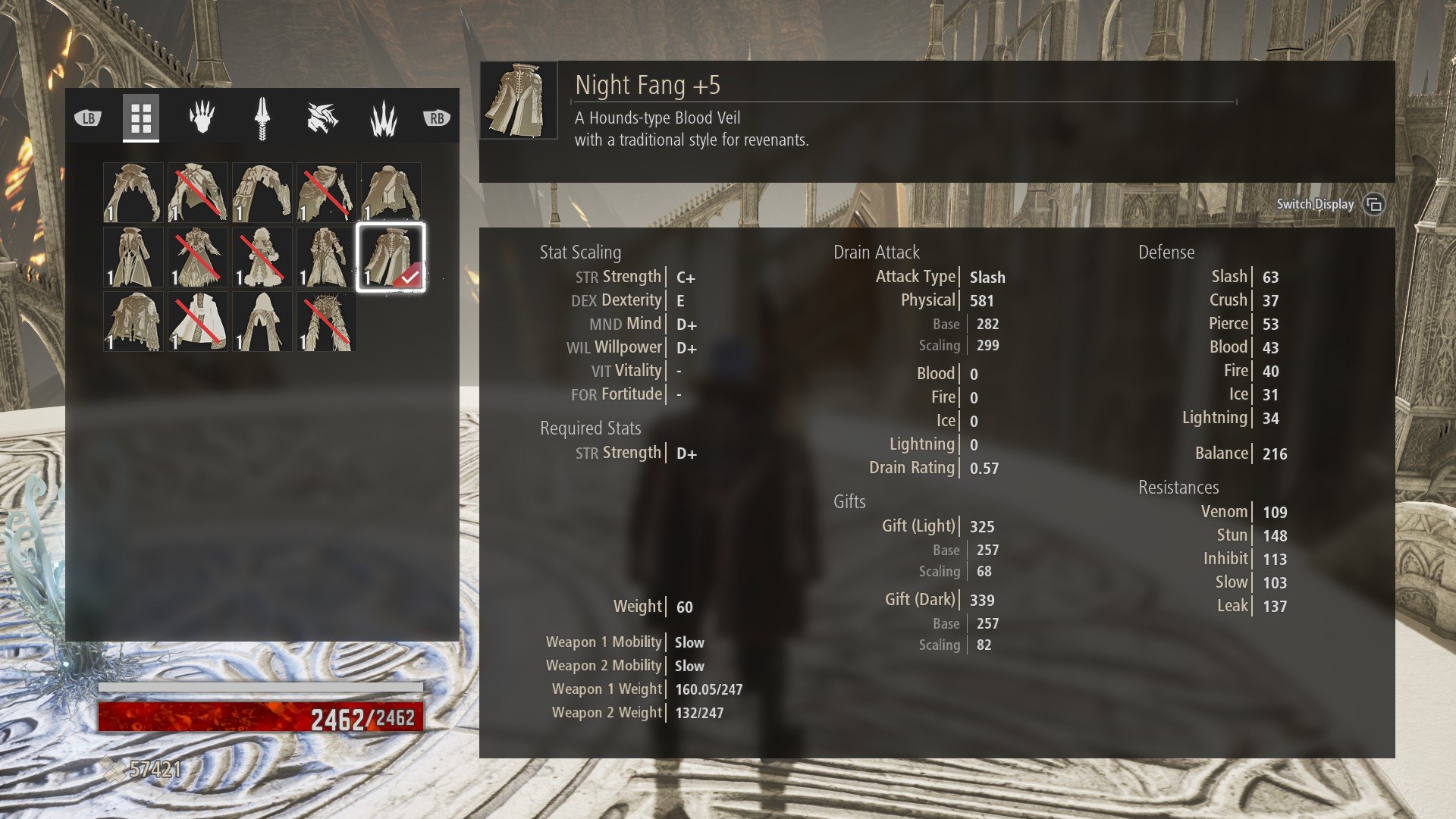 Note that upgrading your Blood Veil with Queen Iron and Queen Steel doesn’t increase their Defense or Balance, only their Drain Attack damage and Gift effectiveness. However, you can Transform it into a Fortification version to increase both of these things in exchange for increased Weight. If you’re already “fat rolling” anyway, might as well be harder to kill. You’ll need an Atlas Chrome in order to do this, and you can get these from Exchanging with Yakumo.

There are no Shields in Code Vein, so you will have to block with your weapon instead. Two-Handed Weapons generally have more Defense, so you will likely use one, though there are a few exceptions like the Broadsword. Two-Handed Weapons hit like a truck, but have a much slower swing, increasing the odds of interruption. This is where Balance comes in. It allows you to trade hits and keep swinging until you gain the upper hand. 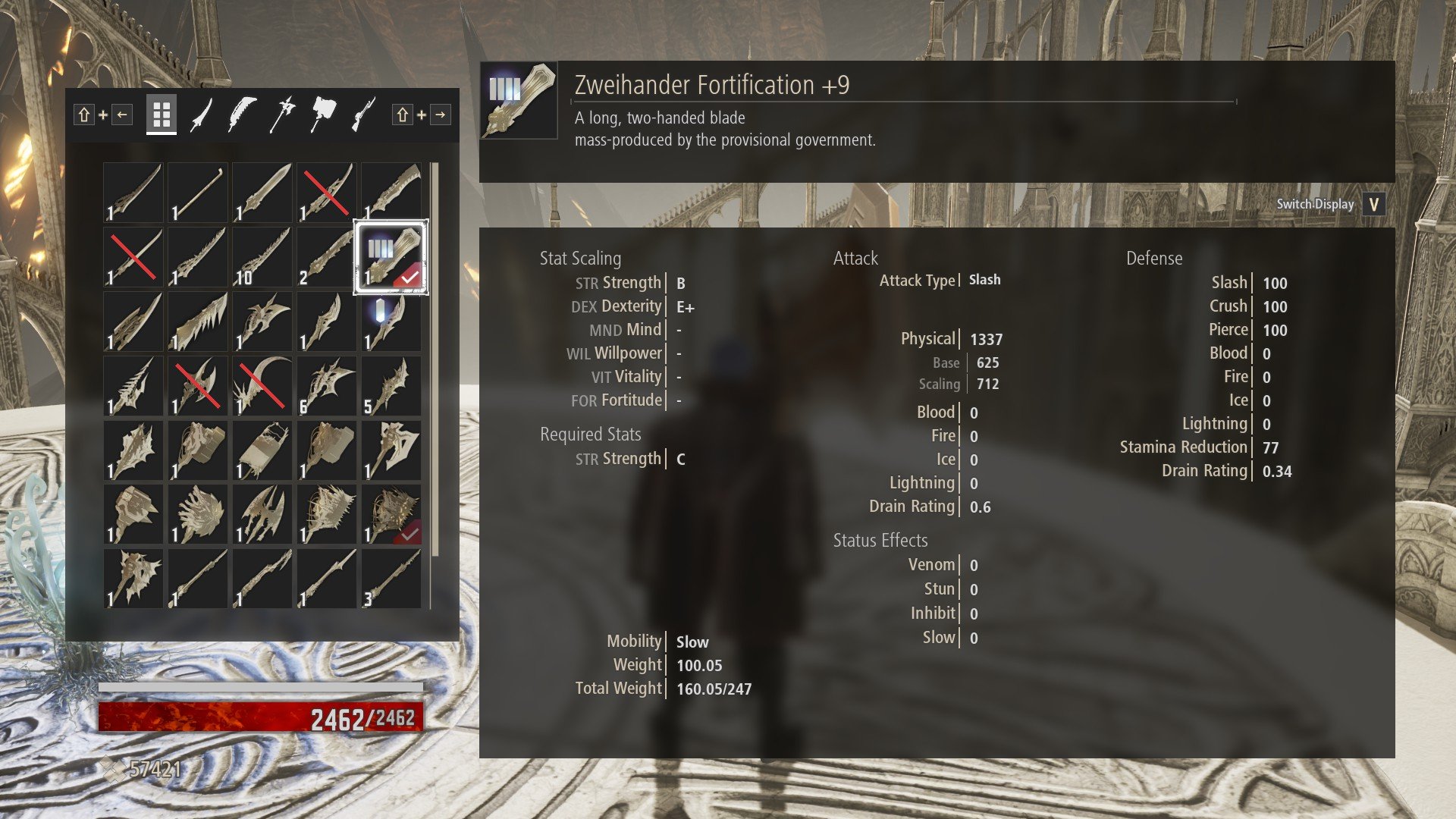 Much like Blood Veils, upgrading your Weapon doesn’t improve its Defense. However, you should also consider Transforming your Weapon into a Fortification version in order to increase both its damage and Defense in exchange for increased Weight.

Gifts initially can only be used with the Blood Code that they are part of, but as you use them in combat you will “master” them, and then you can use them with any Blood Code. There are both passive and active Gifts, and I’ll cover which are good in both categories for Tank Builds. You can only have 4 Passive Gifts equipped at one time, and 8 Active. Let’s begin with the recommended Passives first:

Playing a Tank is not an easy thing to do, and you need to gear properly, and to learn the attacks of enemies and watch for openings. Because you will take chip damage from Blocking it has a bit of a steeper learning curve, but you can offset this via high HP and Defense. Additionally, you can use the Zweihander for a 100% physical damage reduction while Blocking. If you want to take no damage while Blocking most attacks, it’s definitely the Weapon to use.

Don’t forget to use Skill Gifts and attack with them when appropriate. You will hit like a truck when playing a Tank, and you need to kill enemies with powerful attacks. You can’t just sit and Block forever or you will eventually die. Block the initial barrage, then counter with Skill Gifts and finish enemies quickly. 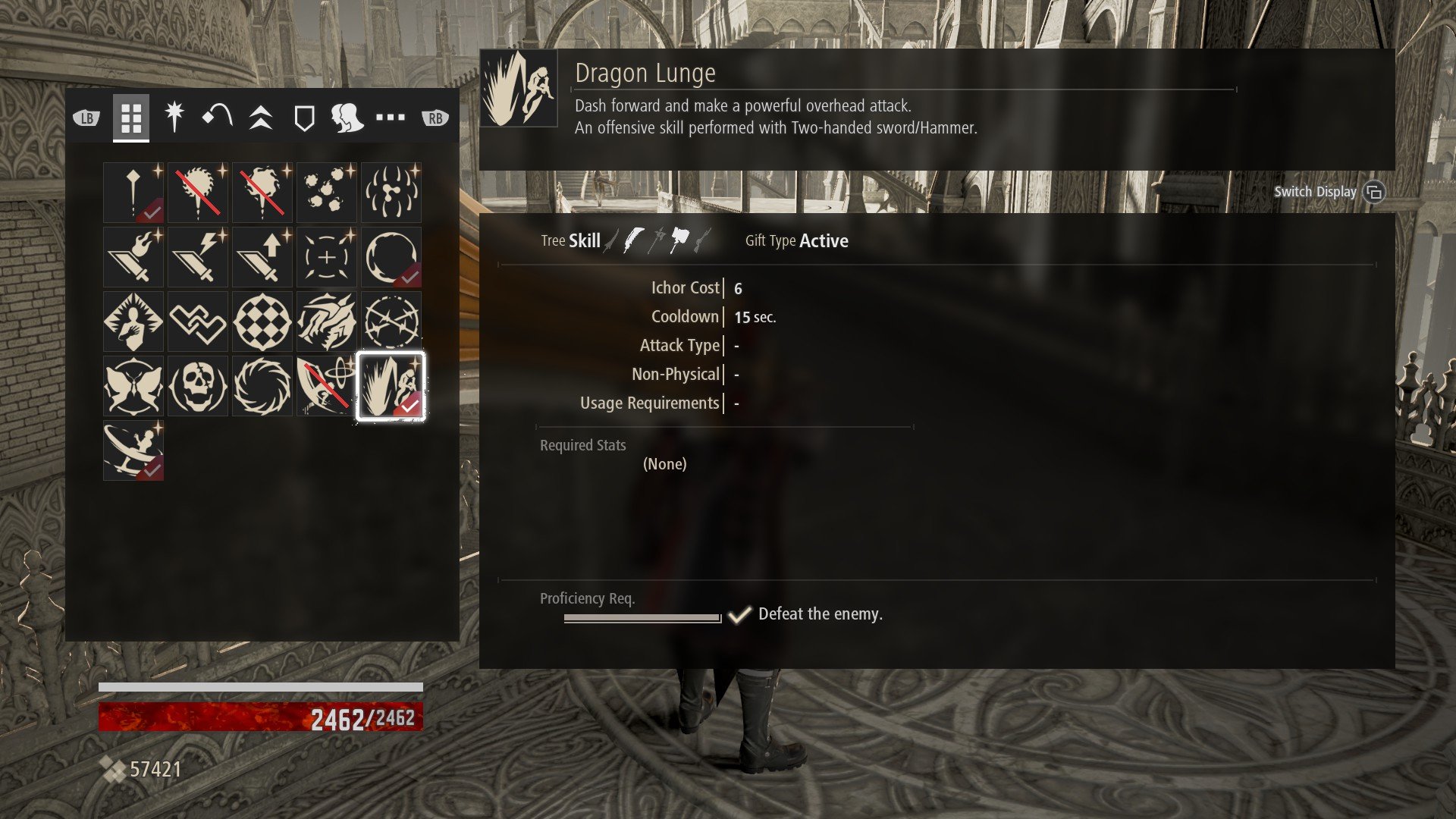 Lastly, you can still Dodge with this Build and there may be times when it is more beneficial to do so. For instance, rolling through an attack may position you perfectly for a Backstab and you can get some free damage and a chance to heal or regain a bit of Ichor. Some enemy attacks cannot be Blocked successfully, so learn what these are and dodge them instead.

Stay tuned for more Code Vein Build Guides and be sure to check out our Getting Started Guide if you have basic questions or confusions about the game!