In this Code Vein Build Guide we’ll explore just exactly how you make the Dark Mage Build, which is a pure “Caster” Build. How do you get the most from your Weapons, Blood Veils, your Blood Code, and your Gifts? Well that’s exactly what we’re going to cover, and how they all fit together to create the Dark Mage.

Dark Mages rely on having a high Ichor count, and using powerful Dark Gifts to range enemies down from afar. Because enemies have different weaknesses, they will change Gifts where appropriate, to deal maximum damage to their target. Your fire Gifts aren’t very effective? Try ice and see how that performs. This makes Dark Mages extremely flexible.

There are several mage type Blood Codes in Code Vein, and you won’t begin the game with them all. In this section I’ll discuss which Blood Codes to use while you are working your way to your final destination: Harmonia. First up is the most obvious one: Caster.

If you’re planning on making a Dark Mage, then this is the first Blood Code that you’ll be using. It features a high Ichor count at 30, and B+ Scaling in Willpower. Willpower is the Stat needed to improve Dark Gift damage, so this is exactly what you’ll need early on. It is vastly outperformed by other Blood Codes, so you’ll want to swap it out as soon as you get Artemis.

Artemis is the first upgrade you’ll take, and it features extremely good Willpower scaling at A. You should see a massive improvement in damage immediately, and your HP, Stamina and Balance will all increase. This Blood Code is received from Mia, after she joins you. Use it until you gain Harmonia.

Harmonia is perhaps the best casting Blood Code in the game, because with Passive Gifts it can reach S+ scaling in Willpower. In addition, it contains the Active Gift: Supernatural Blood, which you can use to cast spells in a pinch if you need to. Make sure to collect all the memories in the Crown of Sand to get this Blood Code after defeating the last boss there.

Blood Veils play a very important role in the effectiveness of Gifts. Your Blood Code and Blood Veil work together to determine how strong your Light and Dark Gifts are, with your Weapon having no impact here. When selecting a Blood Veil be sure to look for ones that grant a higher overall Dark Gift value. This will be caused by the scaling of the Willpower stat on the Blood Veil itself. Some great choices are Blackblood Liberator or Suicide Spur. Of the two, Suicide Spur does more damage, but Blackblood Liberator has more defense. The choice is up to you.

Upgrading your Blood Veil is paramount when making a mage because ever upgrade will increase the overall damage of your Dark Gifts. This means those wishing to play mages need to prioritize their Blood Veils when spending their valuable Queen Steel and Titanium. Upgrade as often as you can, and farm materials if you need to. You won’t one shot enemies if you don’t do this.

By playing a Casting role you’ll be locked out of nearly all Weapons in the game early on, and this is because you will not meet the Dexterity or Strength requirements. You will be relegated to some One-Handed Swords and most Bayonets unless you use Passive Gifts to boost these stats (which you can do). You shouldn’t be relying on these Weapons much anyhow, so this shouldn’t be an issue.

As I mentioned before, Weapons play no impact in the damage of your Dark Gifts, so it does not matter what the scaling of the Weapon is, as long as you can use it. Still, consider changing your Weapon to a Devour version to help out with Ichor return when attacking, as you may need to do so on rare occasions. Additionally there are a couple of late game Weapons that have decent Willpower scaling, which means you’ll do increased damage with these Weapons.

Gifts play a vital part of any Build, but even more so in a mage type Build. What Gifts you use, and what resistances your opponents have will determine just exactly how effective you are in combat, so you should always be on the look out for new Blood Codes that have Gifts you can use. No other Build type will be as excited to see a new Blood Code.

Gifts initially can only be used with the Blood Code that they are part of, but as you use them in combat you will “master” them, and then you can use them with any Blood Code. There are both passive and active Gifts, and I’ll cover which are good in both categories for a Dark Mage Build. You can only have 4 Passive Gifts equipped at one time, and 8 Active. Let’s begin with the recommended Passives first:

The Dark Gifts of a mage build are going to vary from area to area, depending on the elemental weaknesses of the enemies and bosses found there. Any of the “Roar” Gifts are very very good for one shotting enemies at a safe distance and should be used on tougher to kill enemies as they are expensive Ichor-wise, and are overkill for some of the lesser ones. The downside to the “Roar” Gifts is their lengthy cast time and shorter range, making them less than ideal for some Bosses where you don’t have the time or spacing to fire them off.

Blood Shot, the first Dark Gift you will use, is ironically one that is a staple through the whole game. It boasts exceptional range, and a very quick cast time, allowing for its use in just about any situation. Additionally, it only costs 2 Ichor, which is very low, and it can sometimes one shot easier enemies. I recommend keeping this one slotted at all times.

Blood Sacrifice is perhaps the best Gift in the game for any Mage Build as it allows you to consume HP in return for Ichor, preventing the need to melee. This allows you to play a pure Caster, and there is really no other way to do this. It is located in the Hunter Blood Code, so get it and master it ASAP to begin playing a pure Caster as soon as possible.

AoE, is something that all Dark Mages should have and there are really only a couple good AoE Gifts, but Volatile Storm is by far my favorite. You will get this from the Harmonia Blood Code, and it does insane damage over time. It’s best to cast it at enemies when they’ve stopped for a second, and works great in tandem with another character who plays melee. 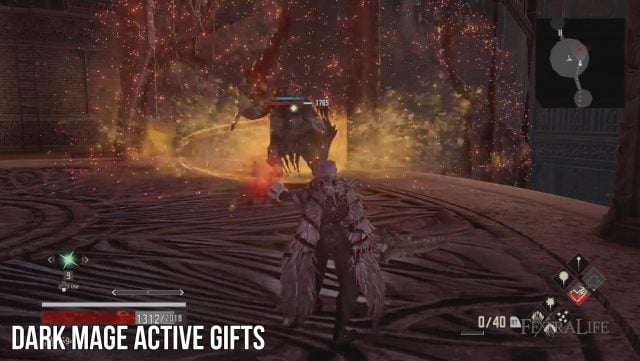 Casters can be very hard to play earlier on, until you get some of the Passives and Blood Sacrifice, so don’t be surprised if you die quite often. However, once you get your damage up pretty high, you can absolutely wreck enemies, and some Bosses. Stick with it, and you’ll get where you want to go.

Be sure to change up your spells if you find that the ones you are using are less effective. This means you will have to master a LOT of spells, and may need to spend some time using other Blood Codes to get this done. Take the time to grind them out, or you may get stuck at a Boss you otherwise wouldn’t and you may have to grind them anyway.

Artemis is arguably a better Blood Code overall, but does not do as much Dark Gift damage. If you are looking to play more of a hybrid type character, consider using Artemis instead because it has higher HP, Stamina, Balance, Drain Attack, Dexterity, Vitality and Fortitude. I’ll be making a Build Guide with this Code a bit later on, so be sure to check that out if that’s more your cup of tea.

Be on the look out for the Leak Status effect, as it causes you to lose Ichor over time and can absolutely devastate this Build. Be sure to clear it using an Ichor Coagulant, so that you can keep slinging spells.

Lastly, because you will consume health to heal, you’ll need to be sure that you have as many heals as possible. For that reason make sure you find all the items that improve not only your heal count, but also their potency. Use the Wiki and collect them all as you go! 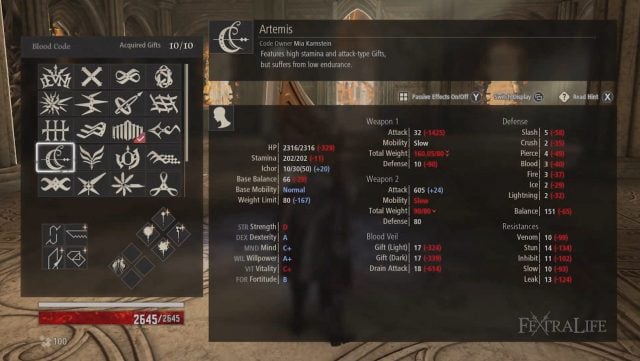 Stay tuned for more Code Vein Build Guides and be sure to check out our Getting Started Guide if you have basic questions or confusions about the game!