In this Code Vein Build Guide we’ll explore just exactly how you make the Queen’s Gambit Build, which is a One-Handed Sword DPS Build that focuses on disabling enemies before finishing them off. How do you get the most from your Weapons, Blood Veils, your Blood Code, and your Gifts? Well that’s exactly what we’re going to cover, and how they all fit together to create the Queen’s Gambit Build.

The Queen’s Gambit Build uses a combination of Light Gifts and the Stun Status Effect to render its victims helpless while they are sliced to death via repeated attacks. Stunning enemies gives a huge window in which to deal massive burst damage, and is extremely effective if done right. Additionally, combining this style of play with the Gift Final Journey gives the player a competitive advantage…if they can kill their prey before their timer runs out…

There are several good One-Handed Sword Blood Codes in Code Vein, and you won’t begin the game with them all. In this section I’ll discuss which Blood Codes to use while you are working your way to your final destination: Queenslayer. First up is the most obvious one: Ranger.

Rangers have B+ Scaling in Dexterity and D+ in Mind making them a good choice early on. You won’t have too many buffs at the beginning of the game, so it’s best to focus on Dexterity and Mobility here. Upgrade this to Prometheus as soon as you can.

Once you have access to Prometheus you’ll see an increase in just about all your Scaling, and your Ichor will increase to 20, which will help with buffing. Mind Scaling isn’t ideal here, because Mind will affect nearly every buff you use, but it will hold you over until you can use Queenslayer. Additionally, it features several Gifts you’ll want, so this will give you a chance to become familiar with them and Master them.

Queenslayer is the recommended Blood Code for this Build. Queenslayer has a Gift that cannot be used with any other Blood Code, and it’s perhaps the most deadly in the whole game…literally. Final Journey will boost your attacks significantly, but will eventually kill you. It lasts about 3 minutes, giving you plenty of time to kill Bosses, and is the primary reason we use Queenslayer for this Build. The other is Circulating Pulse, which hits 5 times in rapid succession without using Stamina! It’s a great way to apply Stun and conserve Stamina at the same time.

Blood Veils play a very important role in the effectiveness of Gifts. Your Blood Code and Blood Veil work together to determine how strong your buffs are, with your Weapon having no impact here. When selecting a Blood Veil be sure to look for ones that grant a higher overall Light Gift value, and isn’t too heavy so that you can keep your Mobility Quick.

For end game I strongly suggest using the Noble Silver for increased Light Gift scaling. It doesn’t offer much in the way of protection, but you should be Stunning the enemy and dodging attacks anyway. The best defense is a good offense with this Build, so go hard or go home! 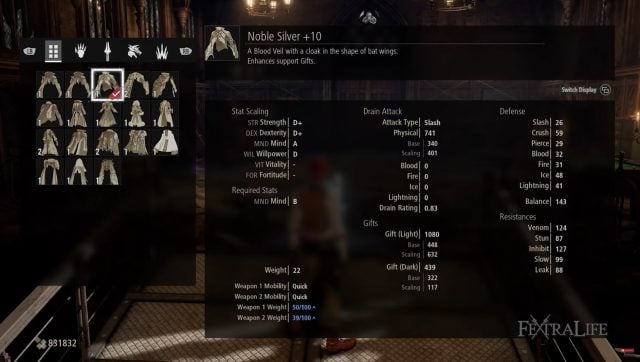 For this Build you’re going to want to use a One-Handed Sword of some kind, ideally one that scales well with Dexterity since that is Queenslayer’s strong suit, but you can also use one that scales with Strength as well. I like to use Blazing Claw late game as it hits hard and has fantastic Scaling. However, you can use whichever Sword you wish as long as it’s fast, and you’ve Transformed it into a Stun version.

Adding Stun to the Weapon will allow you to apply the Stun Status Effect faster when combined with Numbing Mark, which can make all the difference in the world. These two things work together to give you a real shot at perma-stunning enemies on the regular, so make sure you have both.

Gifts initially can only be used with the Blood Code that they are part of, but as you use them in combat you will “master” them, and then you can use them with any Blood Code. There are both passive and active Gifts, and I’ll cover which are good in both categories for a Queen’s Gambit Build. You can only have 4 Passive Gifts equipped at one time, and 8 Active. Let’s begin with the recommended Passives first: 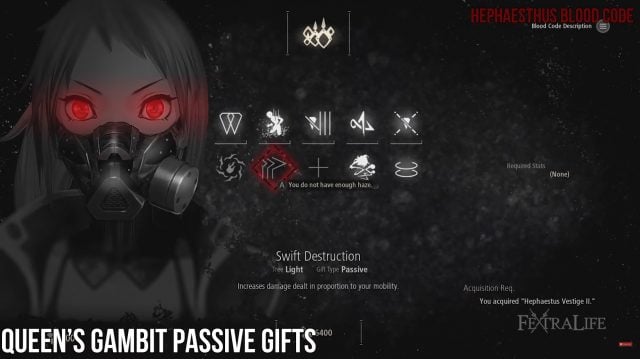 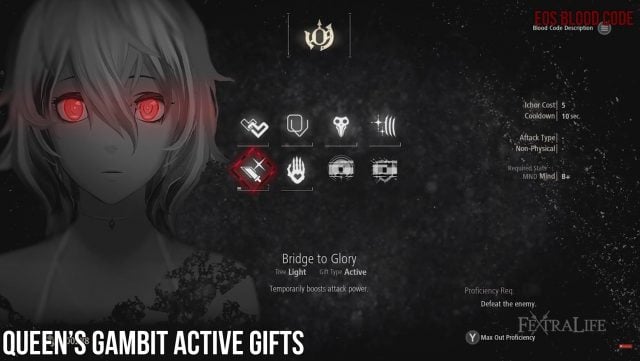 This Build is surprisingly efficient when it comes to Ichor. Between Blood Sacrifice and the repeated strikes you do, you should have no problem having enough Ichor for all your buffs and your Skill Gifts. However, if you find you just don’t have enough, consider adding the Weapon Drain Rating Up passive.

We do not use Debuff Build-Up though you would think it would be best for this type of Build. It’s because it only adds a 20% increase in Build Up, and all said in done, you’ll find it isn’t as much as you’d think. With this setup you’ll see your Stun rating go from 40-48. Damage will suffer using this and isn’t usually needed, but you can always swap it in if you find you need just a bit more Stun build up.

You’ll need to master a ton of Gifts to use this Build, so start doing this as you make your way to Queenslayer. Either use items to bypass the XP needed or use them and get there quickly, but spend some time to get them either way. This Build is much more effective with all its parts, and you may struggle otherwise.

Lastly, learn when it’s best to use Final Journey. It’s not only for Boss Fights anymore with this setup. If you’re playing NG+ or planning to go somewhere in a hurry, this buff can speed things up dramatically. Get comfortable with it, and use it often. It’s not as scary as you’d think! 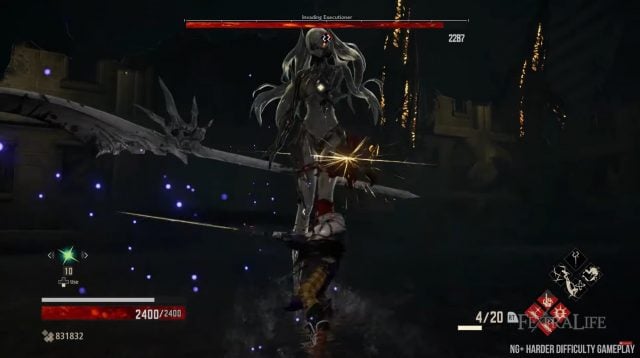