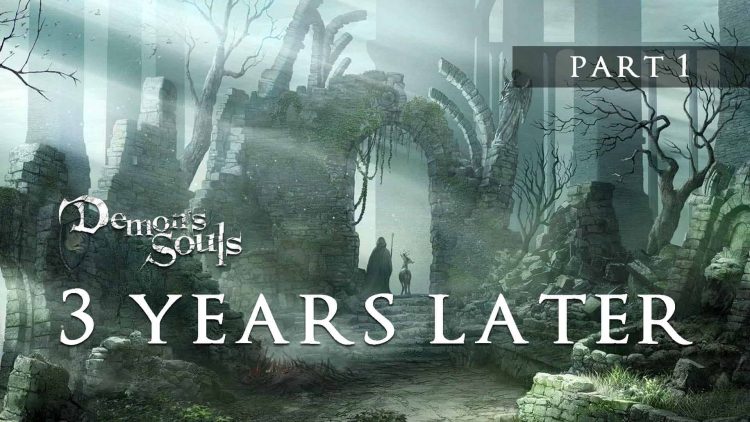 Those of you in the know, know that I love me some Dark Souls and Demon’s Souls. I wore the hell out of Dark Souls and wanted a break. I guess not too much of a break because in goes Demon’s into my PS3.

I hadn’t played it in three years and assumed I’d be rusty as all get out this was semi true. I wasn’t the only going back to this game and several of my internet friends were thinking of ideas to make their respective re-adventures into Boletaria the fictional land in Demon’s Souls more exciting. I had the idea of chronicling my exploits in the hope that my rustiness would be comedic gold.

After being encouraged by these same internet friends, this is exactly what I did. There are two things to note:

With some further ado…

After a very abrupt character creation I want to jump back in I’m asked if I want to take my newborn knight into the tutorial stage. It’s been three years since I traversed Boletaria and I’ve got a bone to pick with a certain demon at the end of this. Yes…bring on the tutorial.

Into the darkness I begin and I’m soon to recall the glory of the fat roll. May my shield protect me. My agility will not. I decide that after 600 hours of Souls games I “should” know how to parry0. Wait, I did it. First try. Seems easier than I remember. Maybe I got lucky. Nope. Demon’s Souls seems easier than Dark. I’m parrying the heck outta these fools. I also wonder at the sadism inherent in placing blue eye knights1 in the tutorial. Seriously? That’s just mean. Even if they aren’t as strong on the inside. The first tries to shield fake me the AI is better than Dark. I don’t fall for it and……PARRY! Ha ha ha!

Finally I’m at Mr. DemonGonnaKillYa2. I prepare my half moon grass. I know he’s gonna hit hard. Even fat rolling I’m avoiding most of his attacks. Confidence! I have a quarter of his life down already. I got this. I roll back instead of to the side.

Welcome to the Nexus!3

I’m finding my memory is still good. A thief ring, cling ring, broadsword and crossbow later confirm that I recall almost everything. It’s a little sad actually. Despite some wacky AI and pacing, I save Ostrava’s5 rear end. On to the Phalanx6. Firebombs and turpentine. That was fast.

On to the Tower Knight7. But not before I mistime my “sprint” to avoid the first round of Dragon fire8.

On to the Tower Knight Round 2: The archer group with the Blue Eye Knight backup. You’re just sick From. You know that? Just…plain…sick.

The archers in the tower knight battle. I pity da fools. The knight. I’m doing ok. I need to heal a couple times. I come back to ankle chopping. I get hit hard by the shield. I realize crescent moon grass9 isn’t gonna cut it. I toggle to the half moon. I hit the square button to activate.

I’m looking at the Tower Knight through a nifty piece of glass housed in brass that Ostrava thought would come in handy for me10. It does. I get a great view of my impending death.

Interlude to Chapter 2: A Poem of Glorious Item Naming

Oh glorious coating, we sing of your might;
But why must you be, both sticky and white?
My sword doth shine, sparkle and glisten;
But too many’a joke, have I had to listen.
A monster’s tough hide, you have helped me poke;
Oh that’s just great, even I made a joke.

The chapter called “next” will feature your glory;
You helped cease demon life, with end that’s quite gory.
So despite your allusions to a synonym of “sailors”
We’ll still whip you out, on weapons we tailor….

Word. Now read that again like I was rapping. Because I was.

0 Equipping a shield or some weapons in your left hand allows you to parry or deflect the attacks of some opponents. If successful, a follow up attack, “riposte” becomes available which does massive amounts of damage
1 Blue Eye Knights are enemies. That are knights. With blue eyes. They’re tough
2 The Tutorial Boss. He’s big, ugly and hits really hard. You don’t have to die to him but I think you’re probably going to
3 This means I died
4 One of the first humans you meet is called the “Crestfallen Warrior.” He give tips but is a good candidate for some Monoamine Oxidase Inhibitors
5 Ostrava is a knight who you can run across several times in the game. If you can keep him alive. He’s fond of jam. Or at least getting into them
6 This is the first boss of the first area you can access. Imagine a small blob about half your height. Now imagine it can use a shield kinda like it’s face and a spear. Now imagine dozens of those guys protecting a giant blob. Kill them then kill it. Oh yeah…they burn real easy
7 The second boss of the area Castle. He’s what he sounds like. A giant knight with some archers hanging out around him. Hint: They’re not shooting at him
8 This also means that I died
9 Grasses = healing items based on moon phases. In order of strength they are crescent, half, late, full and darkmoon grasses. These are great for drug references in the game
10 Ostrava gives you binoculars that can be very helpful. However, activating them means you stand still which is less than ideal during a boss fight. Sorry skull…I didn’t mean to get you crushed
11 Sticky White Stuff is an in game item used to give your weapon a powerful enchantment. It’s sticky, it’s white, and it’s stuff. I’m assuming there are no childish references I can make with this one. The poem is a lot more funny if you already knew this. Well, maybe not

Here’s an overview of the whole Return to Boletaria Series