In this Demon’s Souls Beginner Guide: Getting Started Tips and Tricks I Wish I Knew Before Playing, we will point out useful things I wish I had known when I started playing Demon’s Souls Remake. Whether you are new to the Souls series or a seasoned veteran, here are several tips to get you going. Also make sure to check out our Demon’s Souls Review if you haven’t!

Demon’s Souls Beginner Guide: Getting Started Tips and Tricks I Wish I Knew Before Playing

What is New in the Remake

This is a quick list for game veterans, so that you can get an idea of what’ new: 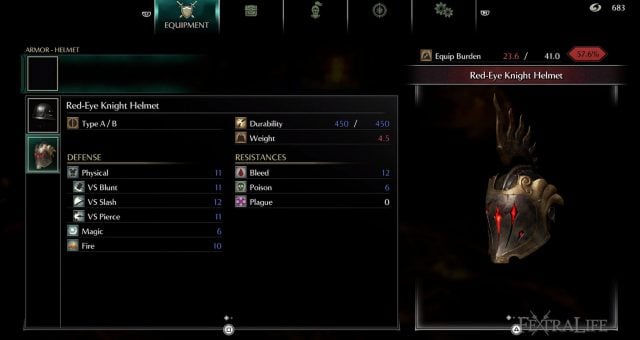 
Souls are both your experience and main currency in Demon’s Souls, but this game puts a specific emphasis in the usage of said souls for specific purposes. You will be hunting for Boss Souls to get new spells and miracles, but most importantly you’ll want to secure the Red Hot Demon Soul and bring it to Blacksmith Ed so that you can unlock Boss Soul upgrades. Make sure you do this as soon as possible! And make sure to Upgrade your weapons as this will have a significant effect on your build.

If you need to farm souls, the best way to get them is to assist other players as a Blue Phantom. If you want to farm in your own world, the best early souls are granted by the skeletons in the Shrine of Storms, but make sure to bring Fire and Blunt so that you deal the best possible damage! 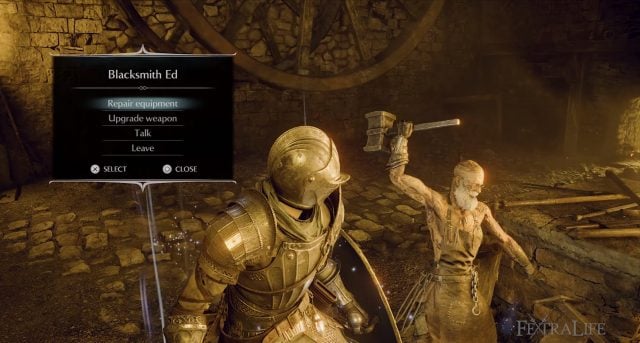 You are likely wondering what is a good path to follow. We have a full Game Progress Route in the wiki, but here’s an overview


Most souls players are by now used to talking to an NPC to level up. For Demon’s Souls, you will be talking to the Maiden in Black at the nexus, BUT… you’ll only be able to speak to her after defeating the first boss of the game which is the Phalanx in Boletarian Palace.

Be mindful that your selected stats are there to stay. If you need to re-spec, you will need to de-level, and we have a dedicated page on the wiki on how to reduce your soul level and, therefore yours stats. Check it out if you want to change your build later on, or make us of the wiki’s suggested builds to keep a good character. 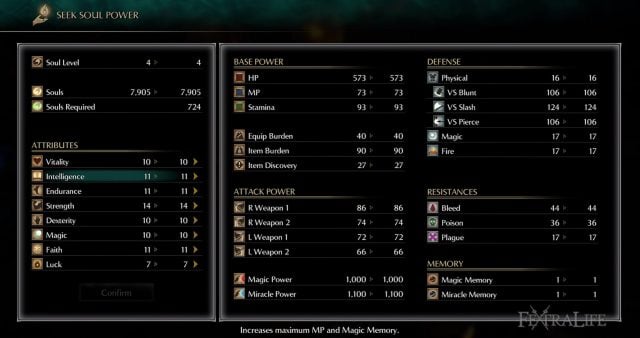 
Demon’s Souls works somewhat different to other souls games, as it has both Equip Burden and Item Burden. Equip Burden essentially affects the movement of your character depending on the Armor and Weapons that you have equipped. So, if you have an armor set that is of light weight, chances are your character will move fast when running, stamina consumption will be less, and when you dodge roll, you’ll be able to execute fast rolls making it easier for your character to dodge attacks, etc. However, if you use heavy equipment, you’ll most likely move slower when you are running, your character will consume more stamina and this will also result into fat rolls when you are dodging.

Item Burden, on the other hand, determines the overall weight that your character can carry. If you go beyond the amount of weight you can carry, the game will basically stop you from carrying any more items until you free up some space.

In conjunction with Item Burden, there is also an item that you want to consider looking for that will help in increasing the capacity of carrying items, and that is the Ring of Herculean Strength. To get this, you have to get the Jade Hair Ornament from Boletarian Palace and speak to Stockpile Thomas at The Nexus. Exhaust his dialogue and eventually, he’ll notice that you have the ornament and he’ll ask if he can have it and in exchange, he’ll give you the ring. 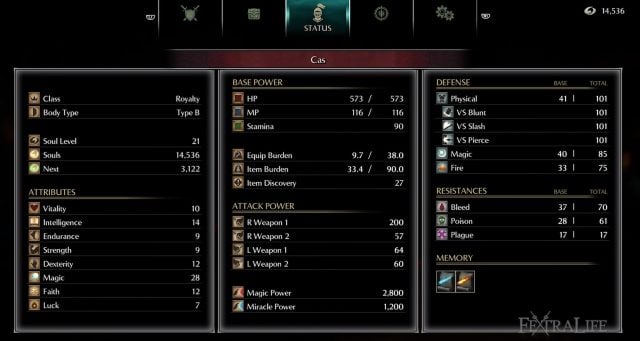 
There isn’t a “Best Class” in the game, but there are two classes that stand out for providing useful starting equipment. The two classes that are recommended for New Players to begin with and that’s the Royalty class and Temple Knight.

The Royalty class provides you with a helpful spell with a ranged ability and this helps you until you get the hang of dodging, defending with the shield, and parrying. This class is arguably the best setup for an interesting mage glass cannon build, so a great option for the magically curious.

On the other hand, the Temple Knight is also a great starting class since its starting stats are good enough for melee combat. It also starts off with a decent equipment and armor, in addition to a talisman to cast the already-learned Heal miracle. 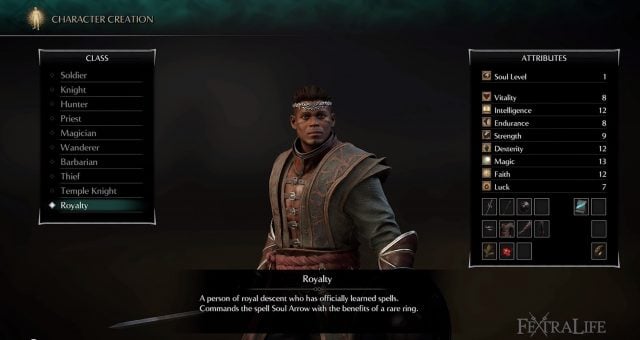 
The core mechanics of Demon’s Souls will be very familiar to those who have played the other entries among FromSoftware releases. Learning when to block, when to dodge, and how to parry are key components of combat, as is the situational awareness to divide and conquer when approaching mobs.

If you want to practice these combat mechanics, the best way to do so is to travel to the Boletarian Palace and fight against the Dreglings. Don’t get frustrated if you don’t get it after a few runs, it’s okay, just keep practicing until you get the hang of it.

You’ll also want to make it a habit to raise your shield at all times as much as possible! Enemies in Demon’s Souls can be sneaky as fuck, so use your shield! Your shield is your best friend and you may not realize this, but raising your shield can save your life.

We have builds on the wiki if you need help optimizing your equipment and stats, but if you want to do your own thing but feel underpowered, I suggest you head over to the Shrine of Storms early on and kill the few big and scary skeletons there for a significant wealth of souls in order to level up a big faster. 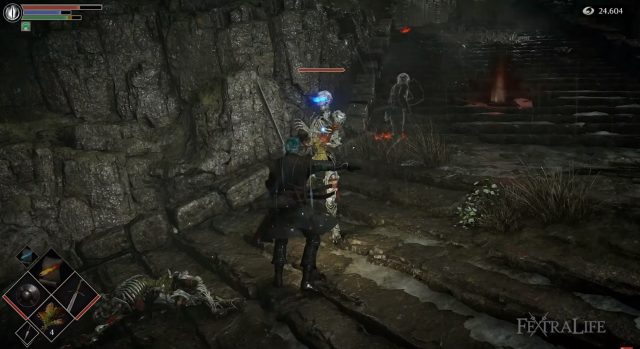 
Melee combat is effective against most of the enemies in the game but you may want to consider being a versatile fighter and try to use ranged weapons as well such as Bows, Crossbows, and even some spells.

Being at range can be very useful for avoiding traps, ambushes and ganks, and can also give you a chance to get a few shots in before you have to trade blows with a tough opponent.

You should also keep in mind that Demon’s Souls features various Damage Types and enemies have specific weaknesses accordingly. Skeletons, for example, tend to be weak to Blunt and Fire damage, while the Rock Worms of Stonefang will be better dispatched with magic damage. 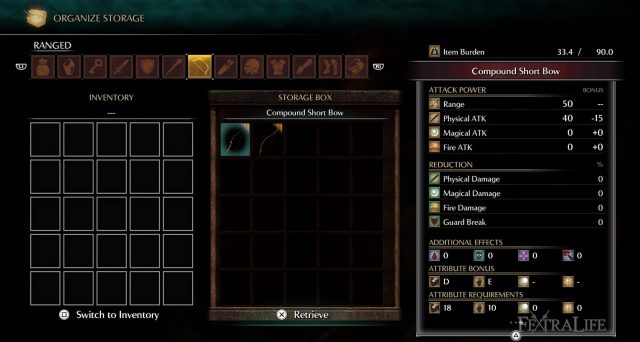 
The World Tendency mechanic of Demon’s Souls determines a world state and triggers several events and NPC questlines. You can view the current status of your tendency by jumping into the Main Menu and select World Tendency. The remake has a clear display of what world is in which state, as well as you character’s own inclination.

Both Character and World Tendencies can either turn white or black, but when you start the game, you will have a neutral tendency for both categories. As you play, your actions will switch your own character alignment (character tendency) as well as the world state (world tendency) based on your actions. Good deeds and killing demon bosses will make it move you toward white and doing bad actions or simply dying in body form will cause your tendency to turn black.

The bad news for new players is that if you die repeatedly and turn your world tendency black, that area will become more brutal and harder to kill and you’ll most likely run into Black Phantom NPCs. The silver lining is that killing these stronger enemies and Black Phantom NPCs will handsomely reward you with more souls, rare loot, and eventually shift the tendencies back to white if you perform good actions or say defeat the boss of that certain location.

White tendency, on the other hand will make enemies easier to kill in exchange for less souls and less valuable item, but with increased healing item drops.

Overall the World and Character Tendency systems are complex and engaging, and if you want to find all the details you can visit our wiki as it has dedicated information on all available tendency events. 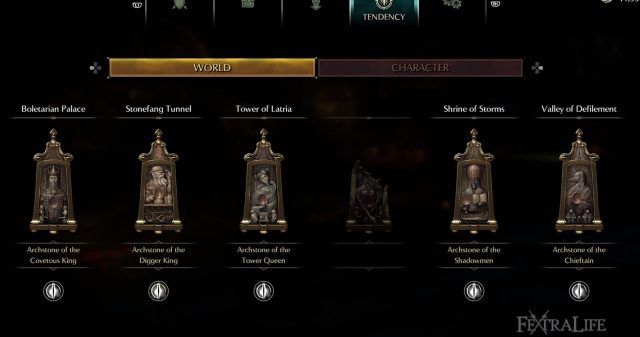 Demon’s Souls has no “hollowing”, but your character does have two forms that affect your stats and what you can do in-game. The default state is Body Form, a corporeal and “alive” version of you that has full HP and can perform tasks such as summoning others. When you die, you will enter Soul Form.

When you are in Soul Form, the maximum HP of your character is halved and you are no longer able to summon other players to your world or be invaded. The good news is that, if your Character Tendency is White, you will deal more damage in this form. If you want to play in Soul Form, then make it a priority to get the Cling Ring from Boletarian Palace, as it will increase your soul form health to 75%.

Now, how do you return back into your body? There are various ways to do so: 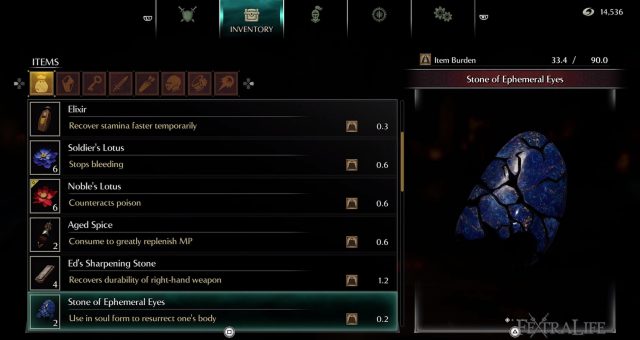 Online and Multiplayer is slightly different than the original game, and it is now closer to Dark Souls, allowing up to 6 players in an online session. You will gain access to online coop by talking to the Maiden in Black after defeating the Phalanx demon. 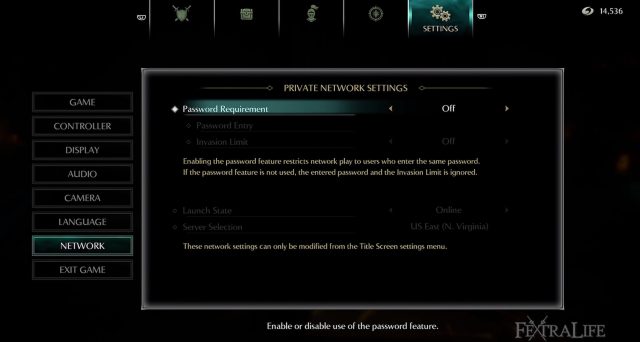