In this Demon’s Souls Remake Build Guide, I’m going to be covering my Soul Mage Build, which uses Magic to take down enemies effectively. This Build is particularly good for beginners or new Demon’s Souls players, as it allows them to kill targets safely at a distance without having to learn their movesets.

The Soul Mage uses a combination of offensive and defensive spells to defeat enemies while at range, only meleeing in the rarest of cases. Some enemies are very nearly too aggressive to range down easily, like the skeletons in the Shrine of Storms, and you might need to engage in hand to hand combat to defeat them. 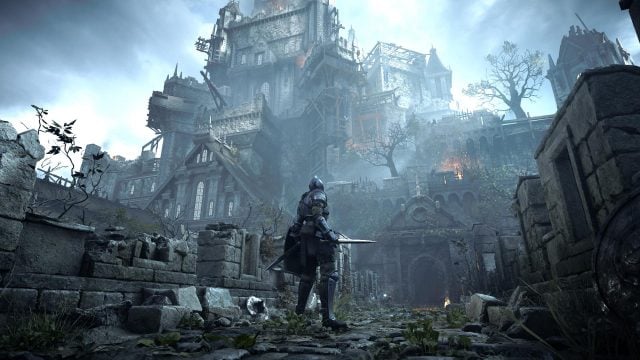 There are many pieces of equipment in the game that benefit spell casting, and you will use these to great effect, changing them around in various circumstances. Few Builds in Demon’s Souls remain exactly the same all the time, and often changing Weapons, Spells or Rings is needed for optimal success. But don’t worry, we’ll cover that here in this Guide as well.

The Starting Class you’ll choose for this Build is Royalty, because it begins the game with Silver Coronet, Silver Catalyst and Fragrant Ring. Silver Coronet and Silver Catalyst both raise your maximum Mana, and Fragrant Ring allows you to regain Mana every 4 seconds. Having these items allows you to cast more spells, and makes Royalty a bit more forgiving than the Magician Class, which doesn’t begin the game with any of these items. It also begins with Soul Arrow instead of Flame Toss, which is more cost efficient when you are first starting out. 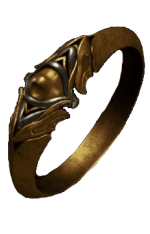 At the beginning of the game the first thing you should do is swap your Catalyst to your offhand, freeing up your main hand for your melee weapon. This will allow you to attack with R1 or cast a spell with L1 without having to swap Weapon. This is important because later on in the game you will carry Weapons in your main hand that buff your spell damage or buff your mana regeneration, and you will need both your Catalyst and your melee weapon out at the same time. Melee Weapons operate more effectively in your main hand, so it’s better to learn to cast with your off hand from the get go, before you’ve built a habit otherwise. 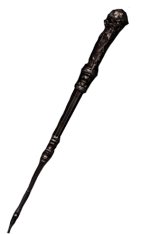 Your Buckler doesn’t have 100% physical defense, which means that you will take chip damage when you Block, so you should try to avoid doing so unless it’s absolutely necessary. Still there are enemies that can be defeated more easily, even taking the chip damage, if you Block. However, you should be using Soul Arrow if you can.

You can Parry effectively with the Buckler, but you should avoid doing so on enemies you have trouble with because you will not have high health, and it is extremely risky. This Build is focused primarily on ranged damage, so if you enjoy Parrying you may want to go with a different Build.

Your primary objective should be to pick off hard to kill enemies or thinning large groups of enemies with Soul Arrow, before defeating enemies in melee combat one on one. Only engage more challenging enemies in melee if you are confident about your ability, and never try to fight 2 or more enemies at the same time. If you’re short on Mana, just wait a bit for it to replenish before continuing if you need to. Do not rush into these scenarios because you are impatient.

Be sure to pick up Flame Toss from Freke’s Apprentice in the Nexus when you have some extra souls, as Fire Damage is more effective against some enemies like the Phalanx, and you can swap between it and Soul Arrow as needed once you have 14 Intelligence.

Soul Mages need only 2 Stats really, which are Magic and Intelligence, but placing points into Vitality doesn’t hurt either since they will be wearing paper thin Armor. You don’t want to die in 1 hit right?

Soul Mages should aim to get to 14 Intelligence as quickly as they can in order to be able to carry an extra spell like Flame Toss, and then start placing points into Magic and a small amount into Vitality. Once you defeat either the Armor Spider or the Fool’s Idol, you’ll want to take Intelligence to 18 in order to gain a 3rd spell slot, and once you’ve defeated both of them up to 24 for a 4th spell slot. 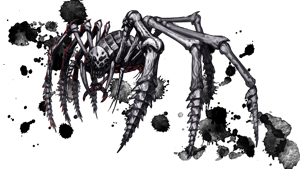 You’re aiming for a Stat spread that looks something like this eventually, though you are unlikely to reach this without heading to NG+:

Magic has a severe drop off in damage after level 50 if you are using the Insanity Catalyst. Intelligence provides no more spell slots past this point and sees a severe drop off in the amount of Mana it provides from there onward. Vitality provides the best benefit per point up through 30, at which point it starts seeing diminishing returns. This will put you at Soul Level 88. If you get that far then you likely have no more use for this guide, so there is no need to go into further details here about stats.

Soul Arrow – This will be the very first spell you have, and it will carry you through the first several hours of the game. It’s cheap, it can kill some enemies in one shot, and most in 2 near the beginning of the game. Use it to pick off harder enemies at range, or when enemies are grouped up and difficult to melee.

Flame Toss – Works similarly to Soul Arrow with a longer casting time, so be wary of this. Use this on enemies that are weaker to Fire Damage to conserve Mana. You’ll likely use it less than Soul Arrow, but it works wonders against enemies weak to fire.

Soul Ray – A more powerful version of Soul Arrow that can pierce multiple enemies in a line. This will be your bread and butter once you get it, but keep in mind that it costs 3x as much Mana as Soul Arrow. Sometimes an enemy can be killed by 2 Soul Arrows OR 2 Soul Rays, so pay attention to how much damage you are dealing, and use whichever saves the most Mana.

Fire Spray – This spell shoots fire projectiles repeatedly at your target as long as you hold down the cast spell button. What’s particularly amazing about it, is that it lets you move while you cast, so you can avoid enemies and projectiles while blasting away at a foe. This works particularly well against Bosses weak to Fire Damage, and Black Phantoms that tend to dodge Soul Arrow or Soul Ray.

Protection – This spell reduces the Physical Damage you take by 30%, which can save your butt, especially because you are going to be really squishy. It lasts 40 seconds so use it before facing a tough enemy or Boss, and refresh it during Boss fights if you need to.

Warding – An upgraded version of Protection, it reduces the Physical Damage you take by 70%. This makes you nearly impossible to one shot, which gives you a fighting chance in any battle. It also lasts 40 seconds, but costs over double the Mana of Protection. It does not stack with Protection. 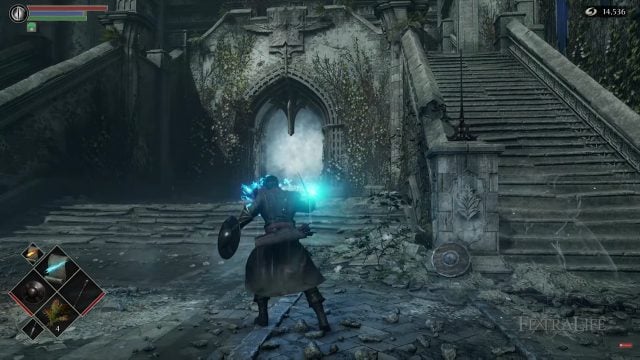 There are other spells you can take of course, but these are the ones I have found particularly effective for this Build. You likely won’t have all these equipped at the same time, but you should have most of them once you have enough spell slots.

In this section we’ll take a look at what equipment you’ll need in order to play the Soul Mage Build effectively. Keep in mind that you will likely change this up some depending on what section of the game you are on, but this should serve to give you some idea of what setups you’re looking for. First let’s take a look at early game.

At the beginning of the game you’ll basically have all that you need to succeed, but you’ll want to pick up and equip the Cling Ring as soon as you can to further increase your Health in Soul Form. You’ll likely be in Soul Form a good amount of the time, so this can really help keep you alive. 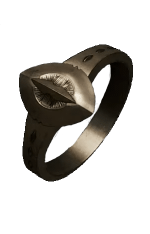 Another really good pick up early on is the Crescent Falchion in the Shrine of Storms. It takes almost no time to acquire, and gives you a strong melee attack, while also increasing your Mana regeneration. You should look to get this as soon as you can. Note that upgrading Crescent Weapons increases the frequency at which you regenerate Mana. 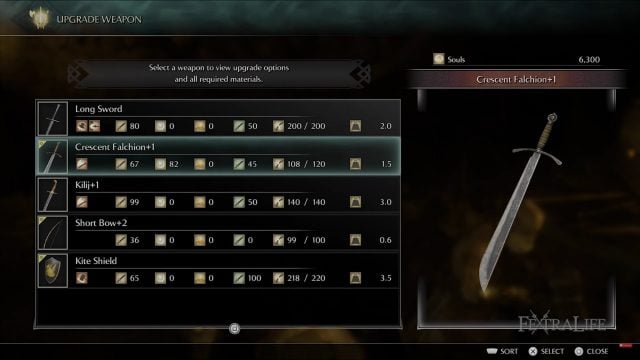 The Tower of Latria

In the Tower of Latria you will find the Ring of Magical Sharpness, which will further boost your Magic Damage. You should replace your Fragrant Ring with this once you get it, relying on your Crescent Falchion for your regeneration instead. 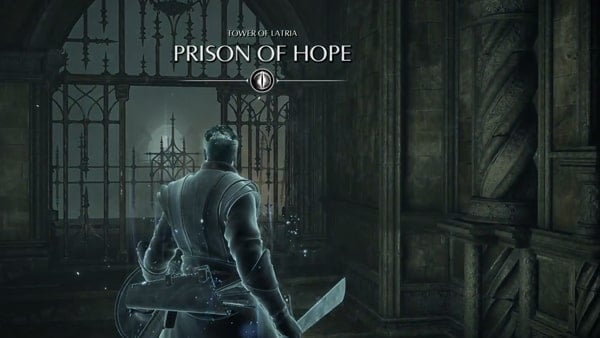 You can be summoned as the Old Monk Boss anywhere in the Tower of Latria by placing your Blue Stone down. If you defeat the host then you will gain the Monk’s Head Collar (Helmet), which will boost your Magic Damage even further. Note that you can hide helmet in the settings if you wish to, as it can often block your view.

After defeating the Old Monk yourself in the Tower of Latria, you can use its soul to transform your Silver Catalyst or Wooden Catalyst (if you picked one up) into an Insanity Catalyst which will further boost your Magic Damage. However, you will have a huge reduction to your Mana pool, so plan accordingly and try to kill things in one spell cast if possible to conserve Mana.

You can stock up on Spice from the Blacksmith Boldwin in the Nexus, or Patches if you’ve done the beginning part of his quest line. This will allow you to cast Spells much more frequently without worrying about your Mana nearly as much. Spend some Souls and keep a large supply of these to hand so that you can cast freely without worry. 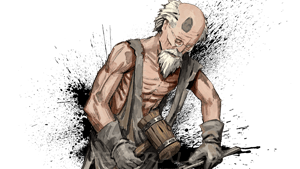 You can find Blacksmith Boldwin in The Nexus

Make sure that you do NOT use the Yellow Demon Soul you get from defeating Old Monk to get Homing Soul Arrow or you will not be able to craft the Insanity Catalyst. This is important because you won’t gain another Yellow Demon Soul until NG+.

Pay attention to how much damage your Magic and Fire spells do against enemies, and try out both types of spells to find out what works better on each enemy. This sort of knowledge is extremely valuable if you plan to play again through NG+, and can make life easier if you plan to play with other Builds as well.

Remember that you must Attune new spells you acquire at one of the magic trainers in the Nexus, and you cannot change spells while in an Archstone. Plan accordingly, and setup you spells before you head out.