In this Bruenor Build Guide: Tank for Dark Alliance Dwarf Bruenor Battlehammer Dungeons & Dragons, a Dungeons & Dragons Dark Alliance Build Guide, I’m going to talk about my Bruenor Battlehammer Tank Build, which debilitates enemies by stunning and knocking them down with his Axe and Shield. If you want to play a Melee Build that crushes enemies while having decent Physical Damage and also staying resistant to attacks, then this guide is for you.

Bruenor’s Tank Build staggers enemies and then deals crushing Heavy Attacks that can throw them in the air or even knock them down. Similar to Wulfgar, in addition to Physical Damage, he also inflicts Elemental Damage thanks to his Axe’s Stats, as well as the occasional Critical Damage. 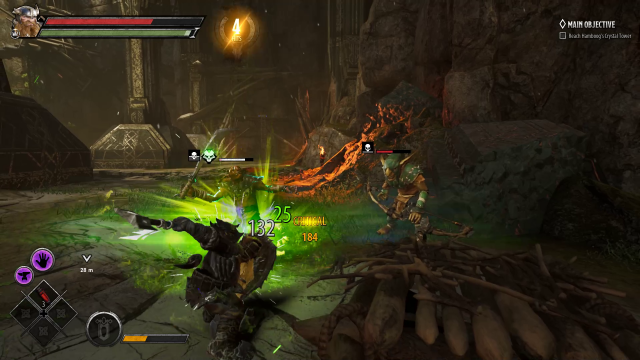 However, Bruenor greatly reduces his max Stamina with the majority of his Moves so Stamina Potions continue to be useful. But unlike Catti-Brie, he doesn’t need to manage it quite as much. Additionally, Bruenor’s reach is shorter than Wulfgar’s so you need to position yourself close to your targets in order to hit them. True to his nature as a tank, he has excellent defense and he can even parry attacks from behind, which effectively staggers enemies.


Every time you level up, you receive at least 1 base Attribute point and at Level 10, you receive 2 points. I’ll discuss how best to allocate them until you reach Level 15. Since you can also acquire more points from shrine relics depending on the Act as well as stats from your Equipment, expect your Attributes to be higher and more powerful at this level. 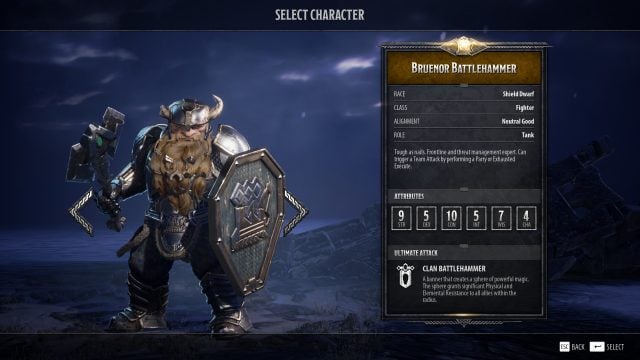 Bruenor is a Shield Dwarf Fighter who specializes in maintaining his good overall defenses while dealing respectable damage with his Axe and Shield. As such, this Character’s highest Attribute is Strength in order to improve both his Physical Damage and Armor. Because of this, you’ll want to reach 16 Strength before allocating points to the rest of your Attributes. 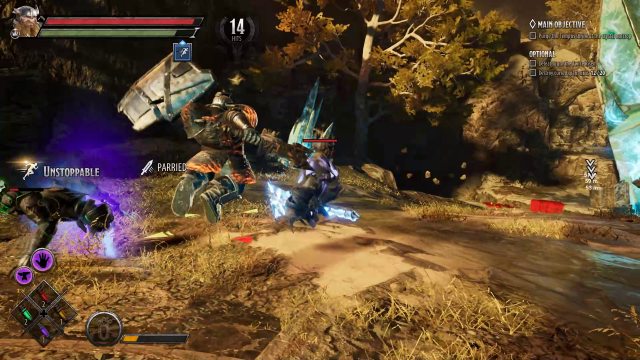 Next, it’s important to invest points into Constitution because this increases Bruenor’s Stamina, Stamina Regeneration, and more importantly, his max HP to keep him alive longer. Maintaining Stamina isn’t too much of an issue even if a lot of your Moves cause Stamina Destruction, plus, you have potions to save you anyway. Basically, you should strive to reach 14 Constitution. 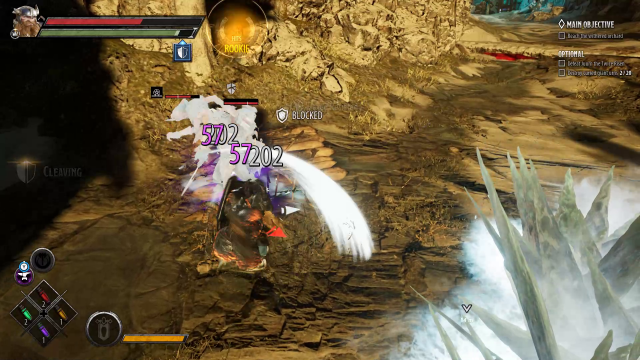 Lastly, in order to boost both your Elemental Damage and Condition Resistances, you’ll need to invest at least 4 points into Wisdom for a total of 11 points. This is relevant most especially in higher difficulties when you’re susceptible to a lot of Status Effects. For surplus Attribute points, consider investing more into Strength, Constitution and Wisdom.


When it comes to Bruenor’s Abilities for his Tank Build, you should choose Whirlwind and Anvil of Clangeddin. Whirlwind consists of powerful spinning attacks, which keep you in the middle of Combat where you’re supposed to be. This inflicts massive Physical Damage as well as the Sapped, Weakened and Slowed Conditions. Sapped reduces the targets’ Stamina as indicated by a yellow highlight, enabling you to execute them in one hit. Meanwhile, Weakened reduces the effectiveness of their attacks.

On the other hand, the Anvil of Clangeddin summons a hammering anvil that deals Physical and Fire Damage over time. It also inflicts Slowed on enemies and imbues you and your allies’ Weapons with Fire Damage. Lastly, this Ability can also break the target’s block meter or guard, which corresponds to the Armor you have to break before damaging their HP. 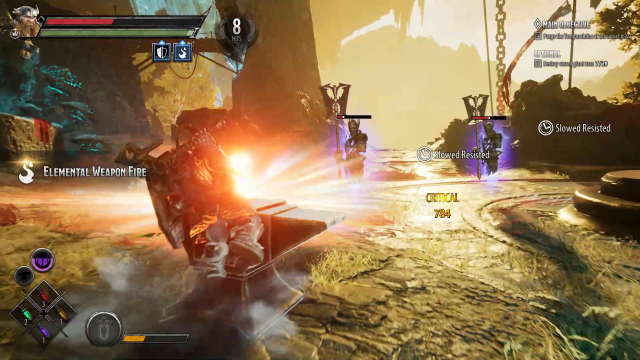 Next is Bruenor’s Ultimate Attack, which is Clan Battlehammer. This creates a huge magical area that significantly buffs the Physical and Elemental Damage Resistance of you and your allies for support and tanking. You also receive buffs in the form of Stalwart, Legendary Resistance, and Unstoppable. These help you deal uninterrupted damage since you cannot be staggered. 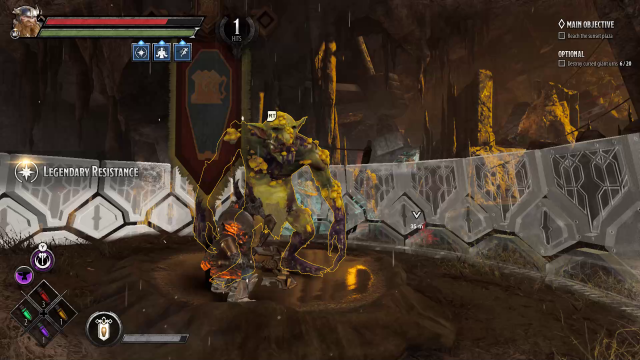 
When you reach Levels 7 and 15, you’ll unlock additional Moves or attack combos to inflict bonus damage and Conditions. Out of the 14 Moves, I highly recommend unlocking the following for your Tank Build. You can take these in any order you like. 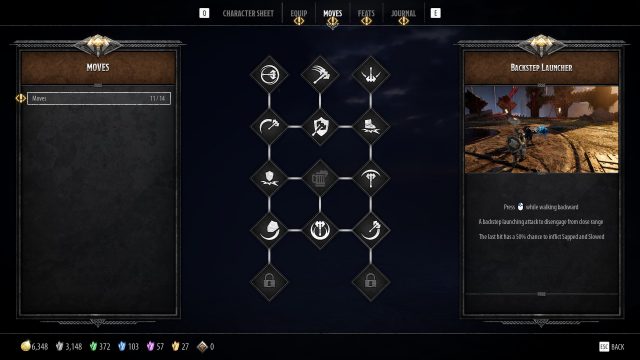 The main idea behind these Moves is to debilitate enemies by staggering or interrupting their attacks before crushing them with your Axe and Shield. You can also deal Stamina Damage so that they move much less than expected. As such, you and your allies have a distinct advantage of controlling the battlefield. Since the majority of your Moves reduce your max Stamina, you’ll have to bring Stamina Potions to replenish them. Although note that you’ll hardly reach a point where you deplete your entire max Stamina reserves, as this usually takes a very long time.


In terms of Bruenor’s Feats, you can choose from 3 categories, namely The Forge, The Hammer, and The Anvil. The Forge focuses more on support by improving your Stamina, Consumable or Useable capacity, and HP. The Hammer provides massive bonuses to your Physical Damage. And lastly, The Anvil buffs your Defensive Skills such as Armor, Elemental and Condition Resistances, and max HP. Note that you gain at least 1 Feat Point every time you level up. 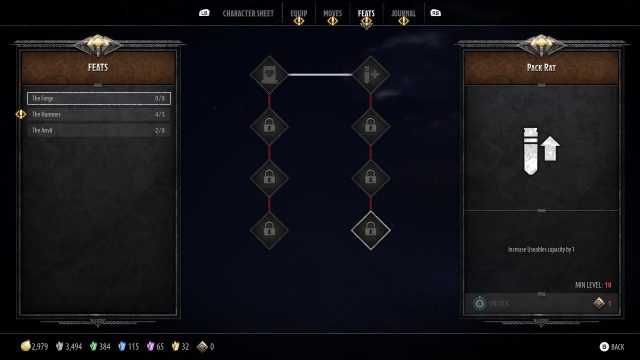 To maximize the amount of Physical Damage you inflict together with the overall defense buffs you gain, it’s important to invest in The Hammer and Anvil Trees at the same time. You can decide which Feat to take first from either tree depending on your preference. Lastly, remember to take a couple of support Feats from The Forge. 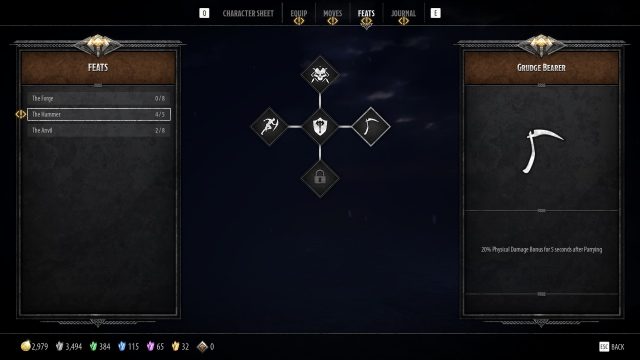 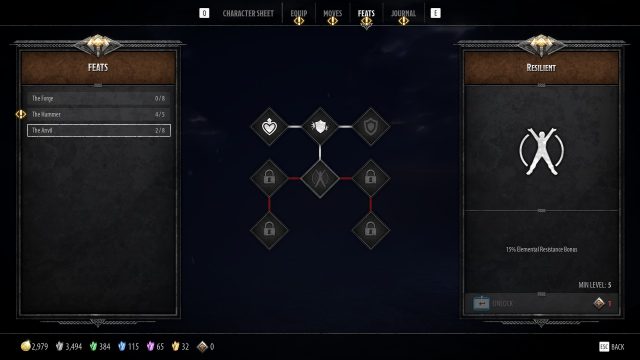 
In your runs, you can opt to equip up to a maximum of 4 Useables that benefit Bruenor’s Tank Build. To enhance its effectiveness, you ought to purchase upgrades up to Level 5 via the Merchant. Depending on your needs, you can choose the Useable you want to upgrade first. 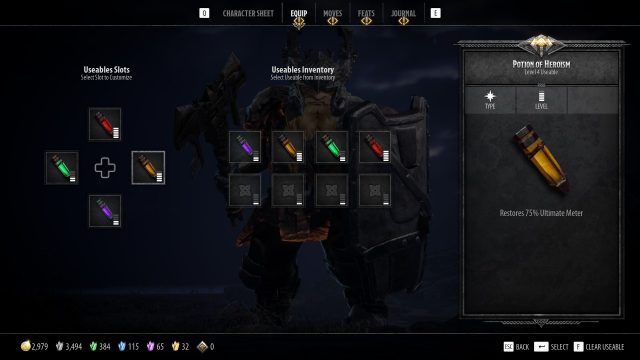 Out of the 8 Useables, I suggest you equip Health Potion, Potion of Heroism, Stamina Potion, and Elixir of Concentration. Health Potion restores the bulk of your HP to help keep you alive. Potion of Heroism restores 75% of your Ultimate Attack’s meter so you can activate it more often. Stamina Potion replenishes both your Stamina and max Stamina. Lastly, Elixir of Concentration reduces your Abilities’ cooldown time by 50%.


Brunor’s Axe plays a pivotal role in his Tank Build because it crushes enemies to their deaths after they’ve been disabled. You should aim to acquire a Weapon with Elemental Damage because this adds to your overall damage while increasing the chances of inflicting Conditions like Frozen, Burning, Poisoned or Cursed. The more rare the Axe, meaning if you get an Epic or Legendary version, the better because this will provide you with extra bonus stats as well as a much higher Attack Damage. 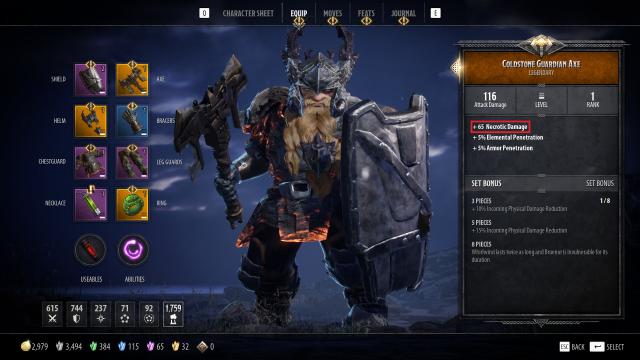 The best Axe for Bruenor comes from the Coldstone Guardian or Duergar Infiltrator Sets, which I’ll discuss next.


You should be aiming to farm for the Coldstone Guardian and Duergar Infiltrator Sets as these will provide crucial Physical Damage Reduction and some Armor Penetration, respectively. Once you get 5 Weapon and Armor Coldstone Guardian pieces, you’ll gain a lot of Physical Damage Reduction. This is an essential part for tanking, as you’ll often be in the middle of fights, thereby making you prone to taking damage. More importantly, in higher difficulties, enemies tend to do huge amounts of damage, which can shred your HP rather quickly. The Coldstone Guardian Set helps offset this damage. You can also choose to complete all 8 pieces of it if you want to focus on spamming Whirlwind. This lengthens Whirlwind’s duration while Bruenor becomes invulnerable to damage during that time. 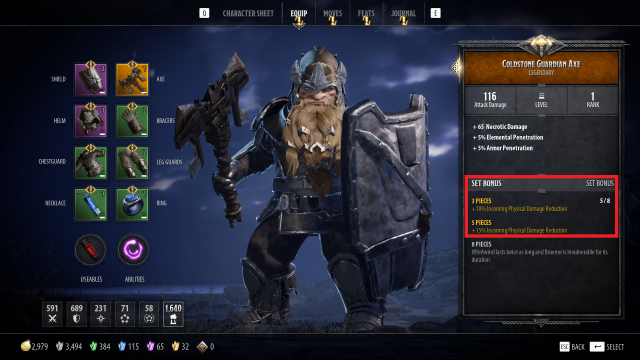 If you don’t get the Coldstone Guardian Axe, you can obtain the Duergar Infiltrator Axe instead, together with 2 Armor pieces from the same set. At 3 pieces, you’ll receive +10% Armor Penetration, which increases Bruenor’s damage against enemy Armor. 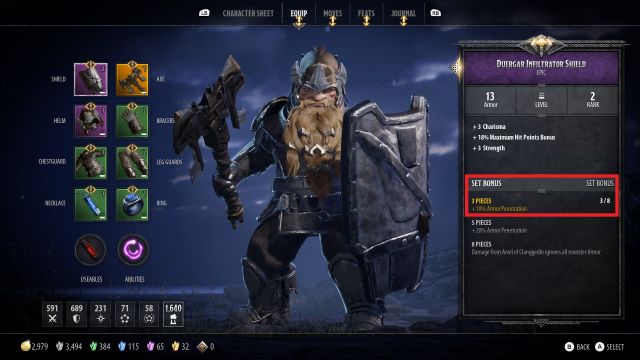 Similar to Weapons, you should get Epic or Legendary versions of Armor so you can maximize Bruenor’s defensive capabilities.

To play Bruenor effectively as a tank, it is essential to practice parrying as often as possible. A successful parry will often stagger enemies in addition to fully blocking their hits. This opens up the perfect opportunity to perform counter attacks, which deal devastating damage. The best part about Bruenor is that he can easily parry hits from behind, something that no other character can do well.

You should also aim to prioritize attacking Goblin Archers or any other ranged enemies, especially those that cause the Frozen status effect. They pelt you with arrows to interrupt your Moves and attacks so you should deal with them early on.

Lastly, there are other good Armor Sets Bruenor can wear such as the Hoard Raider Scales Set, which reduces the Elemental Damage you take if you feel like you’re at a huge disadvantage when facing this type of damage. You may also want to try wearing at least 5 pieces of the Goblin Bane Set because it synergizes well with the Taunt Ability, should you decide to keep it rather than Whirlwind. The set greatly reduces the damage you receive from Taunted enemies by 50%, making you an incredibly tough tank to put down. 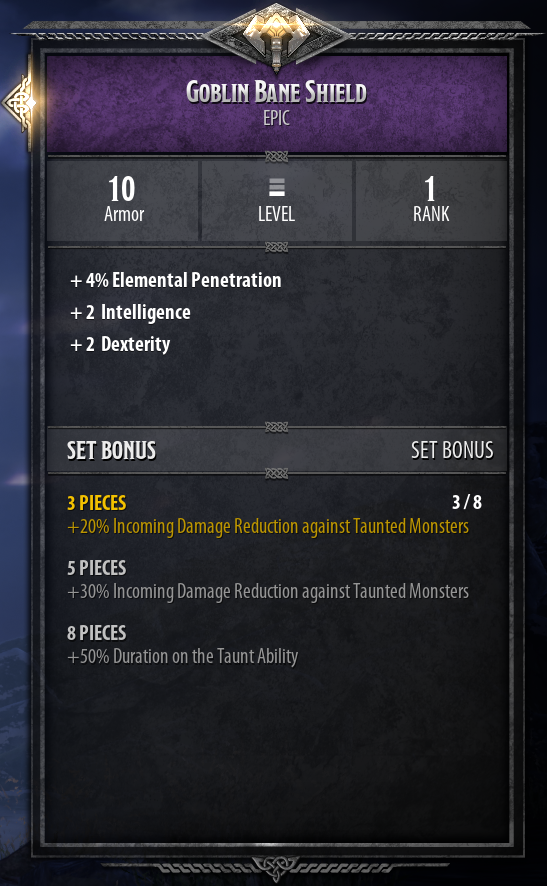