In this Wulfgar Build Guide Shockwave Barbarian for Dungeons & Dragons Dark Alliance Builds, I’m going to talk about my Wulfgar Barbarian Build, which deals damage via Heavy Attacks thanks to his Warhammer. If you want to play a purely Melee Build that primarily inflicts crushing Physical Damage, then this guide is for you. Note that this is a beginner guide, and is meant to get you off to a good start as you learn the basics of Dark Alliance.

Wulfgar’s Shockwave Barbarian Build deals powerful Heavy Attacks, which fling enemies away from him while in Melee Range. He also inflicts Physical, Elemental and sometimes, Critical Damage, when he pounds the ground with his Warhammer because of the highly damaging shockwaves it produces as a result. 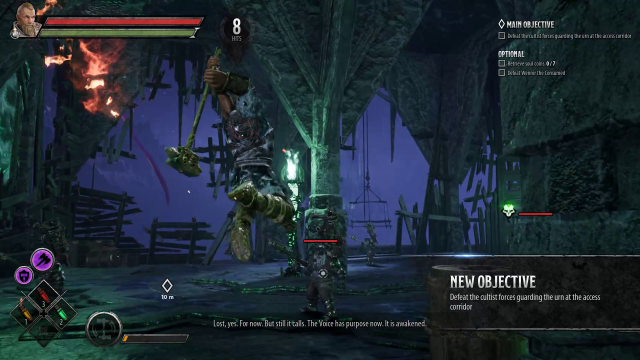 Although Wulgar doesn’t use up the entirety of his max Stamina like Catti-Brie, he is quite a tricky hero to play and this is due to his lengthy animations, which can’t be cancelled. Because of his physical stature and Two-Handed Weapon, he moves slow. Since his Evasion Skills aren’t as fast as Drizzt’s, Wulfgar relies on parries as well to knock enemies back and to subsequently hit them with his mighty Warhammer.

Every time you level up, you receive at least 1 base Attribute point and at Level 10, you receive 2 points. I’ll discuss how best to allocate these until you reach Level 15. Since you can also acquire more points from shrine relics depending on the Act as well as stats from your Equipment, expect your Attributes to be higher and more powerful at this level. 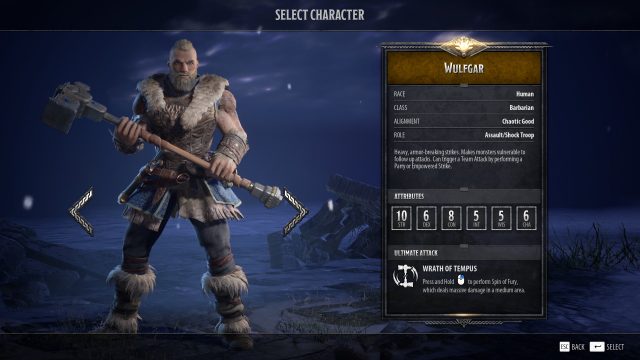 Wulfgar is a Human Barbarian who specializes in dealing hugely impactful blows using his Warhammer. As such, this character’s highest Attribute is Strength, which boosts his raw Physical Damage while providing bonuses to his Armor. Wulfgar needs both, especially the Armor buff since he easily gets overwhelmed by surrounding enemies, which can knock him down. Once in this state, he becomes very vulnerable to subsequent attacks. Because of this, you’ll want to reach 16 Strength before allocating points to the rest of your Attributes. 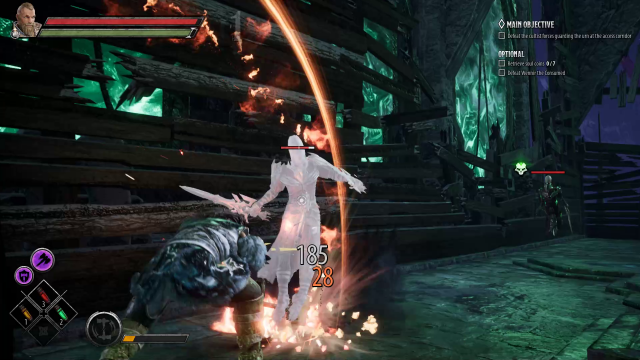 The next important Attribute to invest points into is Constitution. Constitution raises Wulfgar’s Stamina and Stamina Regeneration as well as his max HP, which he needs a lot of to keep him alive especially on higher difficulties. Maintaining Stamina isn’t a concern since you unlock some Moves that organically restore it, plus, you also have Stamina Potions at your disposal. You should be looking to reach at least 13 Constitution. 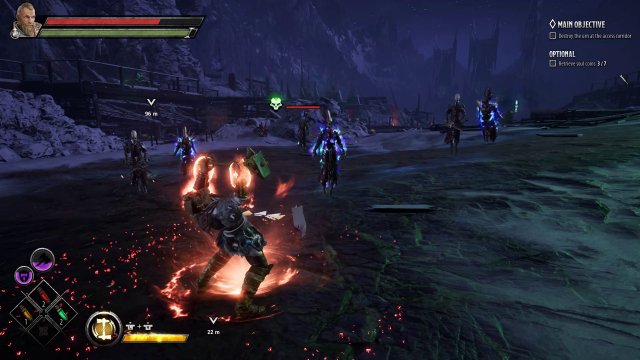 Lastly, you ought to consider investing 4 points into Charisma for a total of 10 points. Charisma decreases the time needed to fully charge your Ultimate Attack. For surplus Attribute points, consider investing more into Strength, Constitution and Charisma. Alternatively, you can also opt to allocate a couple of points into Wisdom to increase your Elemental and Condition Resistances or even Intelligence to boost the Elemental Damage dealt by your Warhammer.

When it comes to Wulfgar’s Abilities for the Shockwave Barbarian Build, you should choose Hammer Throw and as the name implies, Shockwave. Hammer Throw lets Wulfgar slam his Warhammer into the ground to summon a magical hammer, which leaves a burning trail in its wake. He then ignites the trail to hit enemies a second time, thereby dealing massive damage. To be able to hit the majority of them, they have to be positioned in a straight line. Do note that this Ability’s cast time is extremely slow so be careful when triggering it.

Meanwhile, Shockwave allows you to stomp heavily so you can produce tremors in the ground, which can knock enemies down while inflicting the Slowed Condition. This Ability is best used when you’re surrounded by numerous targets so you can deal Physical Damage to all of them as long as they’re within the AoE. 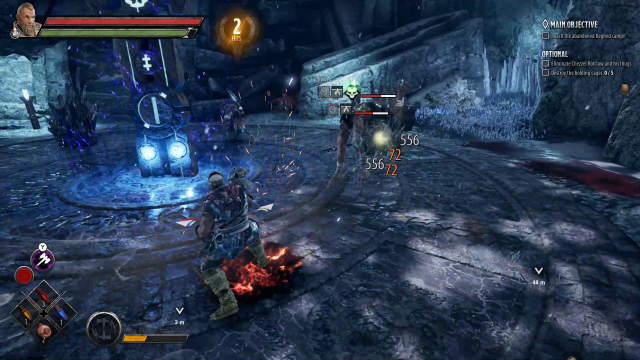 Next is Wulfgar’s Ultimate Attack, which is Wrath of Tempus. This lets you perform Spin of Fury, which literally makes you control your character and the Warhammer to spin and to deal powerful Physical and Critical Damage. Similar to Shockwave, Wrath of Tempus should be activated when enemies are surrounding you so you can maximize the damage you deal. I also recommend using this right before hitting a boss so you can stun-lock them. You also receive buffs in the form of Stalwart, Legendary Resistance, and Unstoppable. These help you deal uninterrupted damage since you cannot be staggered. You also receive less Physical and Elemental Damage because of your boosted defenses. 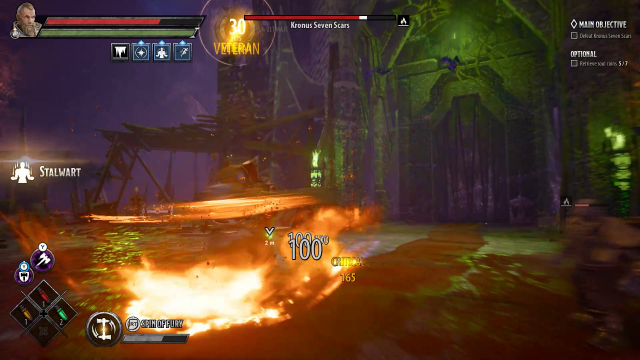 When you reach Levels 7 and 15, you’ll unlock additional Moves or attack combos to inflict bonus damage or Conditions. Out of the 14 Moves, I highly recommend unlocking the following because it enhances the damage and Conditions you deal with your Shockwave Barbarian Build. You can take these in any order you like. 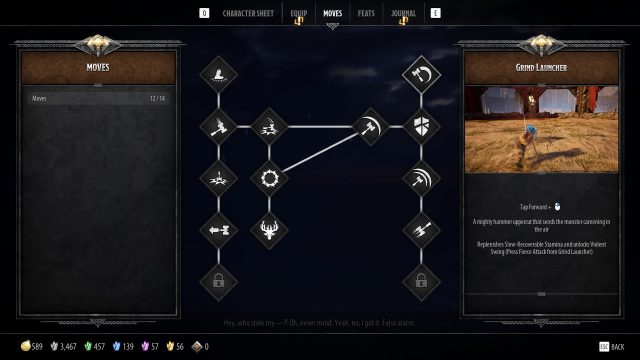 The main idea behind these Moves is to utilize the power of your physique and Warhammer by pounding the ground and executing crushing blows. As a result, your enemies are either thrown away, knocked down, or stun-locked providing you with the advantage to eliminate them thereafter. What you’ll have to remember is that some of these Moves, although extremely powerful, have very slow animations, which you can’t get out of once initiated. As such, you’ll have to time these well and use them only when there are 1-3 enemies in sight so your Moves won’t get interrupted.

In terms of Wulfgar’s Feats, you can choose from 3 categories, namely Pack Hunter, The Wolf, and The Elk. Pack Hunter focuses more on support by improving your Stamina, Consumable or Useable capacity, and HP. The Wolf provides massive bonuses to your Physical Damage while lengthening your Ultimate Attack’s duration. Lastly, The Elk buffs your Defensive Skills such as Armor, Elemental Resistance, and max HP. Note that you gain at least 1 Feat Point every time you level up. 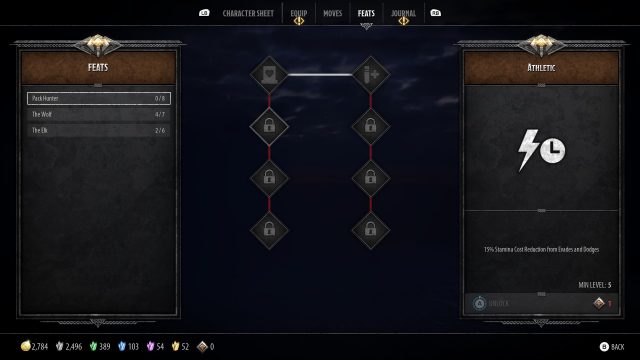 To maximize the amount of Physical Damage you inflict, you should invest in The Wolf Tree first. Next, you can allocate points in The Elk Tree so you gain defense boosts, and then in the Pack Hunter Tree. In each category, it won’t matter which Feat you decide to take first. 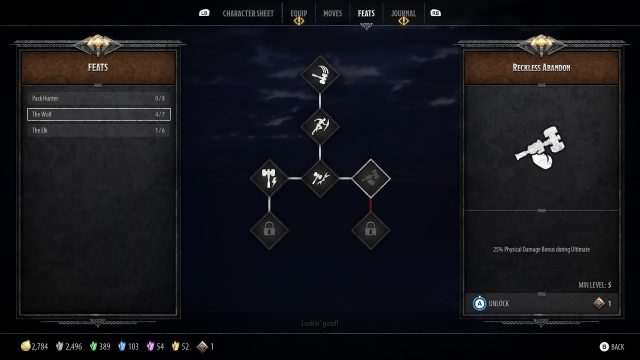 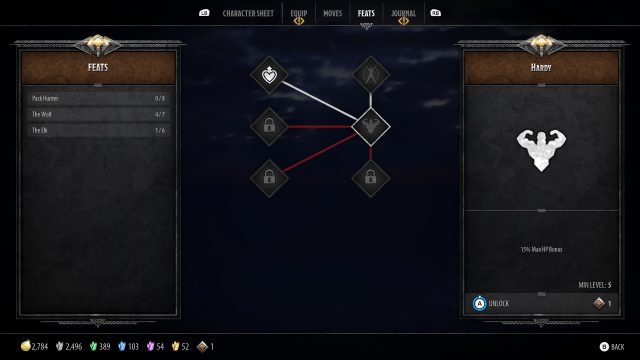 In your runs, you can opt to equip up to a maximum of 4 Useables that benefit Wulfgar’s Barbarian Build. To enhance its effectiveness, you ought to purchase upgrades up to Level 5 via the Merchant. Depending on your needs, you can choose the Useable you want to upgrade first. 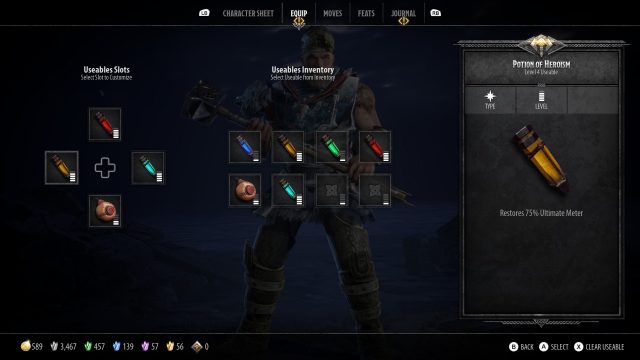 Out of the 8 Useables, I suggest you equip Health Potion, Potion of Heroism, Alchemist Fire, and Elixir of Elemental Resistance. Health Potion restores the bulk of your HP to help keep you alive. Potion of Heroism restores 75% of your Ultimate Attack’s meter so you can activate it more often. Alchemist Fire inflicts Burning while dealing massive damage over time. Lastly, Elixir of Elemental Resistance boosts your Elemental Damage Resistance by 50% for 75 seconds.

Wulfgar’s Warhammer is excellent in his Barbarian Build because it effectively crushes enemies and pounds the ground in order to damage and to knock them down. You’ll want to aim for a Weapon with Elemental Damage to inflict its corresponding Condition. Specifically, Fire or Acid Damage is good to have so you can deal Burning or Poisoned, respectively. The more rare the Warhammer, meaning if you get an Epic or Legendary version, the better because this will provide you with more bonus stats as well as greater Attack Damage. 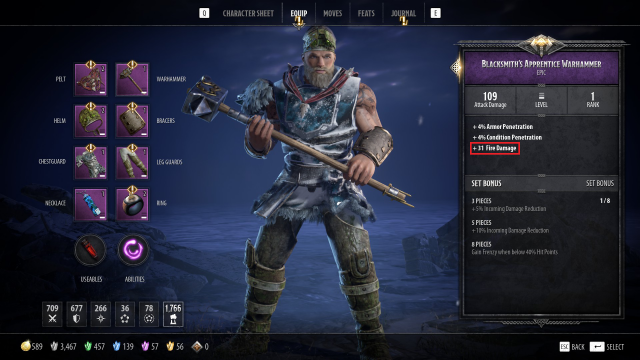 The best Warhammer for this build is either the Blacksmith’s Apprentice or Corsair’s Panache Sets, which I’ll discuss next.

Both the Blacksmith’s Apprentice and Corsair’s Panache Sets are what you should farm for since their set bonuses lower the damage you receive while dealing extra damage, respectively. Obtaining 5 Weapon and Armor Blacksmith’s Apprentice pieces increase your damage reduction. This is very valuable considering that you become vulnerable when you start attacking enemies in Melee Range. Furthermore at higher difficulties, enemies can easily kill you in 1-2 swipes so this bonus prevents them from doing that. In addition to these perks, if you feel like you need Frenzy in order to increase your overall damage and speed, then you can get the full Blacksmith’s Apprentice Set. Note that to activate this, your HP has to be below 40% so you can’t use Health Potions right away. 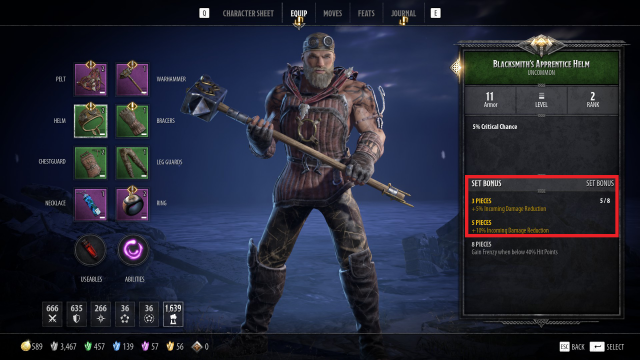 Alternatively, if you don’t get the Blacksmith’s Apprentice Warhammer, you can obtain the Corsair’s Panache Warhammer instead, together with 2 Armor pieces from the same set. At 3 pieces, you boost your Physical Damage against Elites by 10%. Elites are stronger enemies with skull symbols beside their HP. 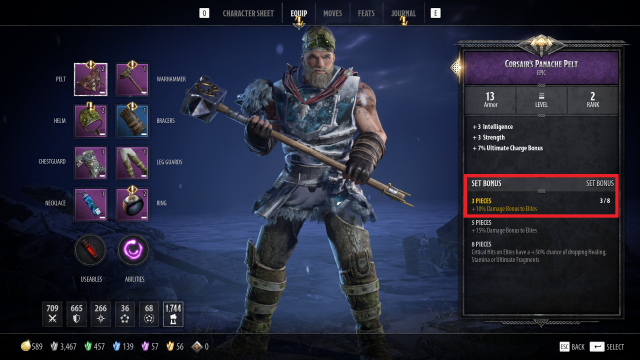 Similar to Weapons, you should get Epic or Legendary versions of Armor so you can maximize Wulfgar’s defensive capabilities.

As a Barbarian, it’s essential for Wulfgar to constantly slam the ground with his Warhammer. This can either send enemies flying or knock them down, thereby making them vulnerable to succeeding attacks. Additionally, Wulfgar has to keep parrying especially when he’s in the middle of Combat as this partially hinders foes’ movements, which is the opportune time to deal killing blows.

You’ll also have to prioritize fully charging your Ultimate Attack meter since this lets you continually spin in bursts while taking minimal damage. You can do this by executing some of your most powerful Moves like Grind Launcher and Guard-Breaker. Just remember that animations can’t be cancelled. Before activating these, make sure that there are only a handful of enemies in the area as this lessens the chances of interrupting your attacks. Moreover, equip Level 5 Potions of Heroism to quickly fill up your Ultimate Attack meter.

Lastly, you can also opt to equip 5 pieces of the Captive of the Abyss Set instead of the Blacksmith’s Apprentice Set so you gain 40% Condition Resistance since you don’t receive this defense buff in Feats. It ultimately depends on what you need most, especially when you do runs in higher Challenge Ratings.

In multiplayer mode, you can try to equip the Reghed Chief Set. At 5 pieces, your Ultimate Attack meter fills up at a rate of 0.3% per hit, which is huge considering the volume of enemies. At 8 pieces, you heal yourself for 20% of the damage dealt with Wrath of Tempus after it ends. I specifically suggest doing this in multiplayer mode since it’s tough to maintain continual attacks given how slow Wulfgar’s Moves are. At least your friends can distract enemies as you crush them with your Warhammer. 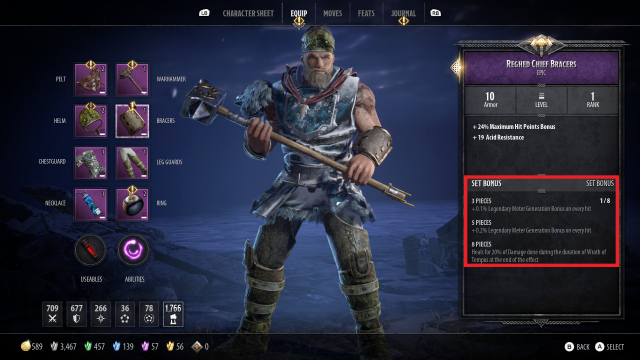