In this Catti-Brie Build Guide: Arcane Archer for Dungeons & Dragons Dark Alliance Builds, I’m going to talk about my Catti-Brie Arcane Archer Build, which deals multiple Elemental Damages while also inflicting Conditions to weaken and damage enemies over time. If you want to play a hybrid Build that focuses on effectively executing powerful Ranged and Melee Attacks, then this guide is for you. Note that this is a beginner guide, and is meant to get you off to a good start as you learn the basics of Dark Alliance.

Cattie-Brie’s Archer Build primarily deals Ranged Attacks, although she has a lot of other Moves to deal much more damage up close. In traditional Dungeons & Dragons 5th Edition, Ranged Attacks done to enemies in Melee Range are imposed with a Disadvantage, which means that they get penalized by lowering their hit chances. In Dark Alliance however, Catti does double or even triple the Elemental and Physical Damage at point-blank range with her Bow. 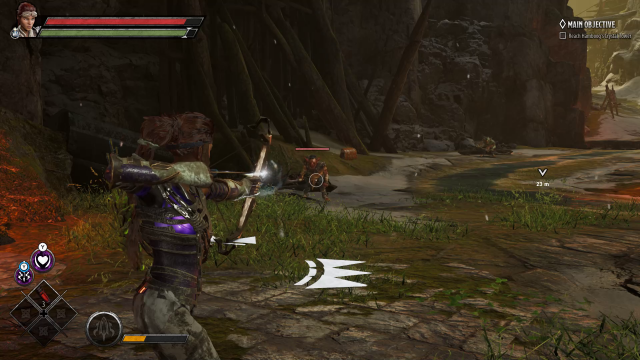 Because Catti has some powerful Moves that can be executed from any distance, she incurs a Stamina Destruction debuff, which reduces her maximum Stamina. As a result, you’ll need to manage your Stamina with Feats, as well as Stamina Potions so you can continue to perform optimally in Combat.

Every time you level up, you receive at least 1 base Attribute point and at Level 10, you receive 2 points. I’ll discuss how best to allocate them until you reach Level 15. Since you can also acquire more points from shrine relics depending on the Act as well as stats from your Equipment, expect your Attributes to be higher and more powerful at this level. 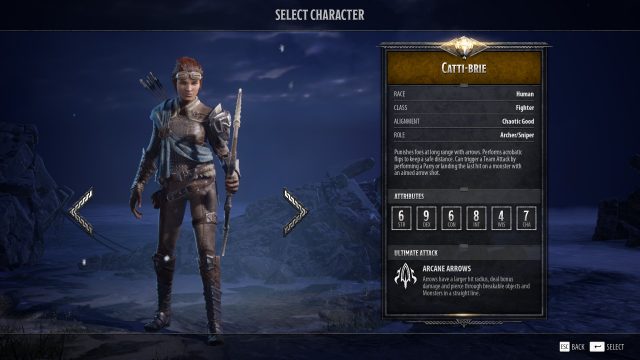 Catti-Brie is a Human Fighter who specializes in dealing massive amounts of Elemental and Physical Damage using her Bow. Similar to Drizzt’s Assassin Build, this character’s highest attribute is Dexterity, which boosts her chances of successfully dealing Critical Hits and Critical Damage from any range. As such, you’ll want to reach 15 Dexterity before allocating points to the rest of your Attributes. 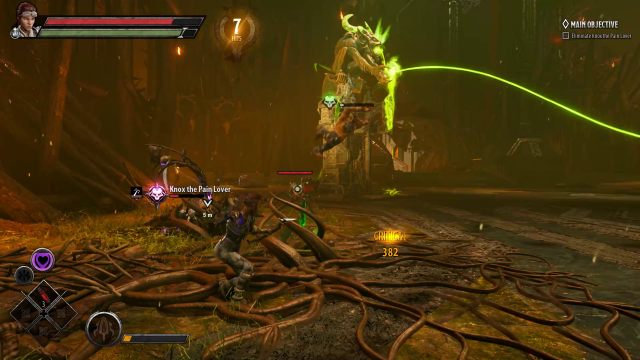 For the next important Attribute, you would want to invest in Intelligence. Intelligence increases your Elemental Damage and Condition Penetration. These allow you to deal massive Fire, Acid or Cold Damage from your Bow and kicks while inflicting damage over time status effects. Additionally, your Abilities’ cooldown times are shorter, which lets you activate them more often. You should be looking to reach 13 Intelligence. 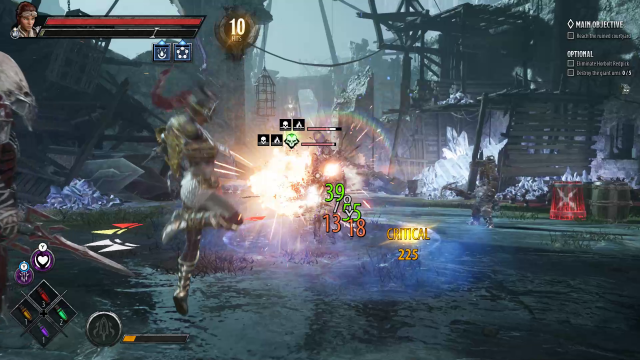 Lastly, you should consider investing 4 points into Constitution for a total of 10 points. Constitution boosts Stamina and Stamina Regeneration, which Catti needs a lot of. Most of her powerful Offensive and Defensive Moves reduce her maximum Stamina until you take a Short Rest or drink a Stamina Potion. At 0 Stamina, your movement and attack speeds are greatly reduced. For surplus Attribute points, consider investing more into Dexterity, Intelligence, Constitution, and even Strength if you need to increase your Armor and Physical Damage.

When it comes to Abilities for Catti’s Archer Build, you should choose Healing Spirit and Heartseeker Volley. Healing Spirit creates a circle to heal you and your team in multiplayer mode for a period of time. Meanwhile, Heart Seeker Volley allows you to rain down arrows in an area, dealing damage over time while slowing down enemy movement. This Ability is best used when targets are grouped together. It also grants Precision Strikes and Improved Critical Damage to allies within the AoE. 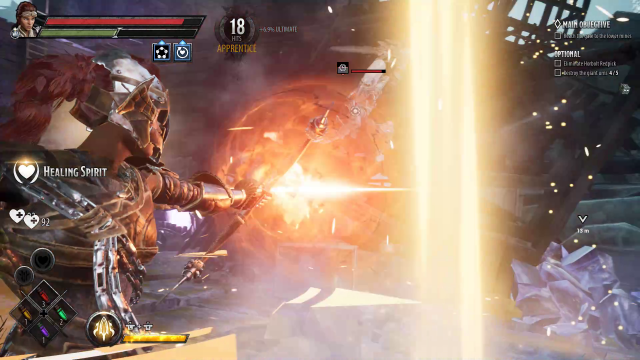 Next is Catti’s Ultimate Attack, which is Arcane Arrows. This greatly boosts your Arrow Damage while allowing you to hit more enemies given its wide AoE. What’s important to remember is to line up your targets in a straight line since Arcane Arrows causes your attacks to pierce them. Moreover, you inflict both the Cursed and Weakened Conditions, which reduce the effectiveness of enemy attacks. You also receive buffs in the form of Stalwart, Legendary Resistance, and Unstoppable. These help you deal uninterrupted damage since you cannot be staggered, as well as receive less Physical and Elemental Damage because of your boosted defenses. 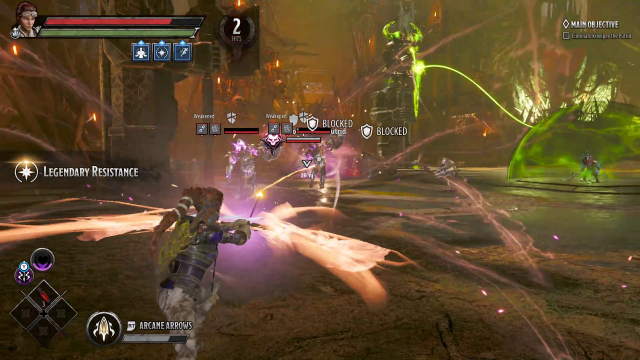 When you reach Levels 7 and 15, you’ll unlock additional Moves or attack combos to inflict bonus damage or Conditions. Out of the 14 Moves, I highly recommend unlocking the following because it enhances the damage and Conditions you deal with your Archer Build. You can take these in any order you like. 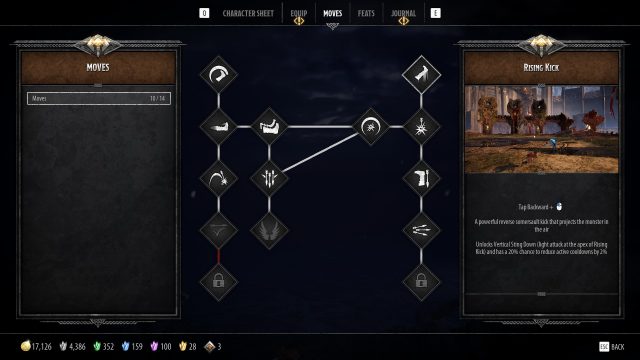 The main idea behind these Moves is to cause as much harm with Conditions as possible such as Bleeding, Burning and Poisoned, to name a few. You also gain buffs such as Precision Strikes, Powerful Strikes, and Improved Critical Damage. The trick however, is to manage the usage of these powerful Moves since it eats up a lot of your Stamina and in some cases, it can even reduce your maximum Stamina.

In terms of Catti’s Feats, you can choose from 3 categories, namely Cunning, The Archer, and Longstrider. Cunning focuses more on support by improving your Stamina, Consumable or Useable capacity, and HP. The Archer provides bonuses to your Physical and Critical Damage for both Melee and Ranged Attacks. Lastly, Longstrider buffs your Defensive Skills such as Armor, Elemental and Condition Resistances, and max HP. Note that you gain at least 1 Feat Point every time you level up. 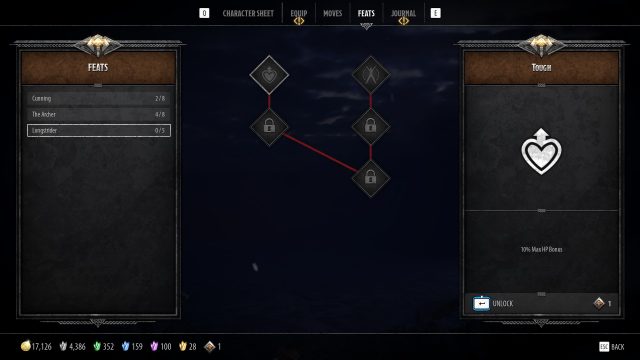 To maximize the amount of damage you inflict, you should invest in The Archer Tree first, and then allocate points in Stamina-related Feats in the Cunning category. Then you can then unlock the remaining Feats under the Longstrider Tree. In The Archer and Longstrider Trees, it won’t matter which Feat you decide to take first. 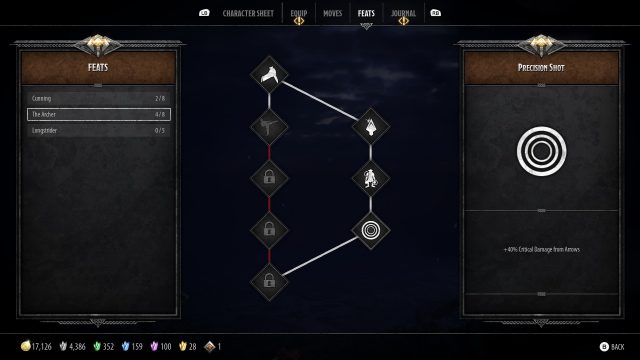 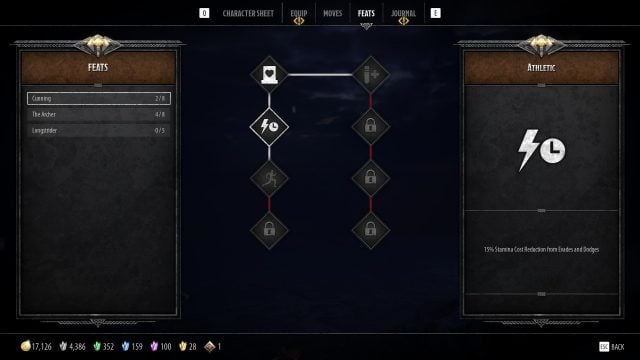 In your runs, you can opt to equip up to a maximum of 4 Useables that benefit Catti’s Archer Build. To enhance its effectiveness, you ought to purchase upgrades up to Level 5 via the Merchant. Depending on your needs, you can choose the Useable you want to upgrade first. 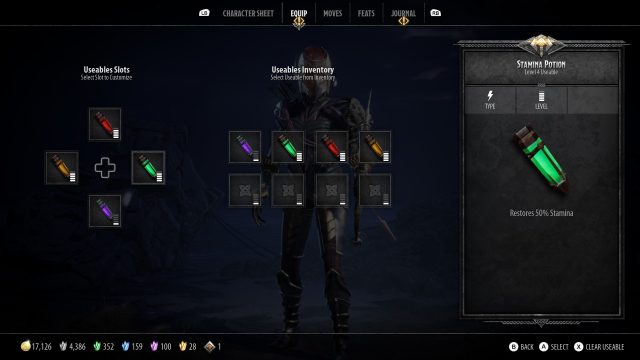 Out of the 8 Useables, I suggest you equip Stamina Potion, Health Potion, Potion of Heroism, and Elixir of Concentration. Stamina Potion is a must have to replenish your Stamina and to restore maximum Stamina. Your maximum Stamina gets reduced when you perform high-powered Moves such as Rising Kick and Cartwheel Bomber. Health Potion restores the bulk of your HP to help keep you alive. Potion of Heroism restores 75% of your Ultimate Attack’s meter so you can activate it more often. Lastly, Elixir of Concentration reduces your Abilities’ cooldown time by 50%.

Bows play a vital role in Catti’s Archer Build because it is your primary source of Elemental Damage. You should aim for Bows with Elemental Damage as well as Condition Penetration to deal massive damage. You’ll want Fire Damage so you can pair it with the Vertical Sting Down Move to also gain the Elemental Weapon Acid buff. As a result, you have the chance to successfully inflict both the Burning and Poison status effects with all of your attacks to deal damage over time. The more rare the Bow, the better because this will provide you with more bonus stats as well as greater Attack Damage. 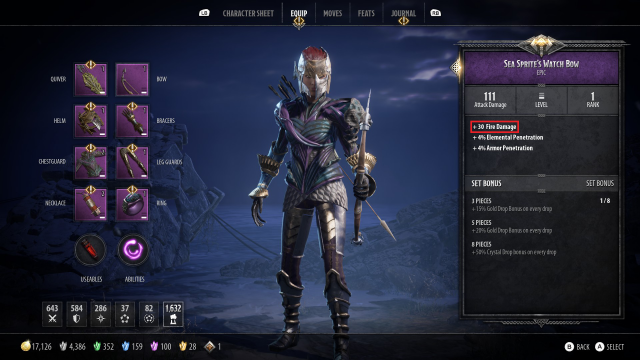 The best Bow for Catti comes from the Goblin Reaper or Underdark Camo Sets, which I’ll discuss next.

Both the Goblin Reaper and Underdark Camo Sets are what you should farm for since these provide set bonuses that synergize well. They significantly improve your chances to inflict Critical Hits and the Poisoned Condition when those attacks land. Obtaining 5 Weapon and Armor Goblin Reaper pieces will boost your Critical Hit Chance by 20%. You don’t need to complete all pieces for this set since the Physical Damage bonus is only applicable when you fight against Goblins, which are generally easy to deal with anyway. 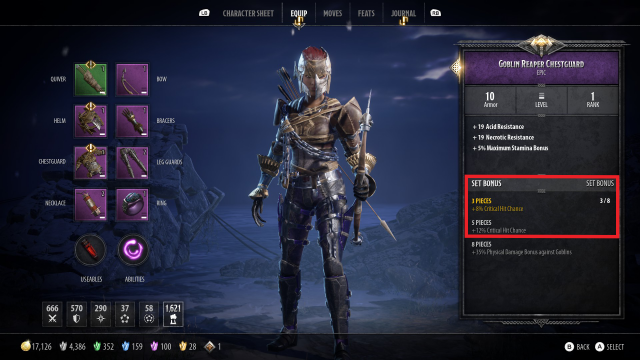 Alternatively, if you don’t get the Goblin Reaper Bow, you can obtain the Underdark Camo Bow instead, together with 2 Armor pieces from the same set. At 3 pieces, you raise your chances of inflicting the Poison Condition when dealing Critical Hits, which works well with the Elemental Weapon Acid buff. Once Poisoned, their HP greatly decreases over a short period of time. 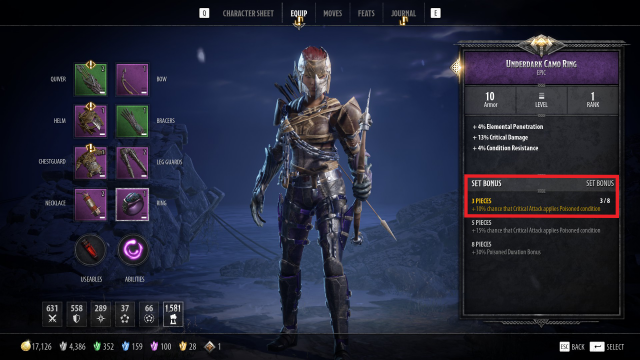 Similar to Weapons, you should get Legendary versions of Armor so you can maximize Catti’s offensive and defensive capabilities.

It’s important for Catti-Brie to maintain a close distance between herself and her enemies. This lets her deal 2x and even 3x the damage at point-blank range with the Aimed Arrows Attack, making it possible to take down even the strongest of foes in just a few shots. Additionally, the hit animation isn’t as long compared to Charge Arrow Attacks so Catti is able to perform this in quick succession.

Remember that activating the Healing Spirit Ability when you’re surrounded by enemies, is beneficial for you and your allies. It provides a safety net to help keep you all alive especially at higher difficulties.

Since you’re going to be up close and personal with enemies for the majority of the time, you’ll also want to parry a lot of their attacks. Afterward, you get to shoot arrows at enemies, which provides you with an advantage to kill them straight up. 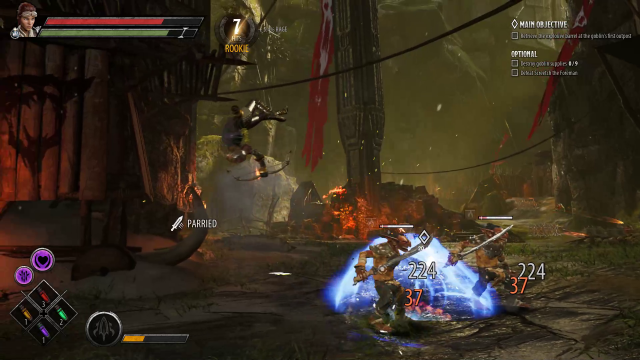 Lastly, you should maintain your Stamina well by mixing up your Moves, which shouldn’t only include those that reduce your maximum Stamina. Additionally, taking Short Rests from time to time and bringing Stamina Potions should be sufficient as well.