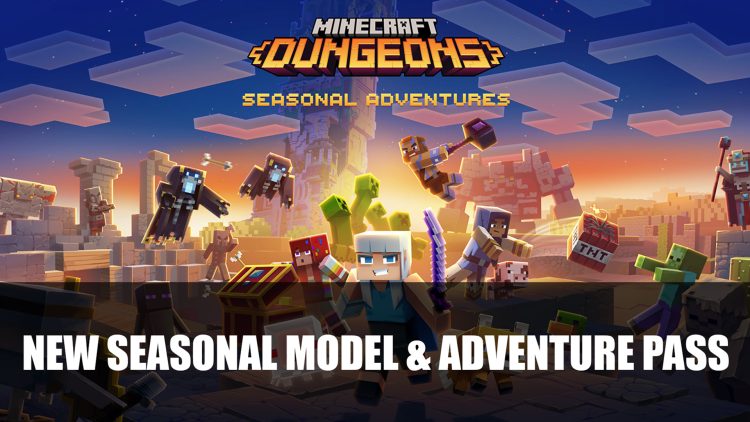 [dropcapM[/dropcap]ojang have announced plans for dungeon-crawler spinoff Minecraft Dungeons which will be getting a seasonal model and battlepass.

Minecraft Dungeons is Getting New Seasonal Model and Battle Pass

Announced at Minecon Live, Minecraft Dungeons will be getting a new update plan for the title called Seasonal Adventures. This will feature both free and premium rewards if you purchase an Adventure Pass. With the completion of new weekly challenges, players will earn Adventure Points but these can also be earned by playing the game normally as well.

Adventure Points can unlock different rewards through the Adventure Pass such as skins, capes, pets, emotes and flairs that can trigger certain conditions. The free reward track also includes emeralds and gold.

Also coming to Minecraft Dungeons is the first season called The Cloudy Climbs. This will include rewards such as a pet spotted pig, tucan and raven, as well as an emote.

Another major addition to the game is the Tower, a brand new area you can access via your camp. This offers players a single-player, roguelike experience which has a number of floors that increase in difficulty as you climb. Each floor offers more gear and choices of what you can claim. The Tower will refresh regularly, expected to do so every two weeks according to Mojang. This challenge can also be used to earn yourself Adventure Points.

You will also be able to use Adventure Points with past season passes even after they expire, so if you’ve missed out on something you wanted, you can still claim them.

Heroes, the adventure continues! Seasonal Adventures are coming to Dungeons! Advance through an all-new progression system to earn pets, flairs, emotes and skins!

So far there is no word on how much the Adventure Pass will cost, but looks like there is still plenty of content coming to Minecraft Dungeons.