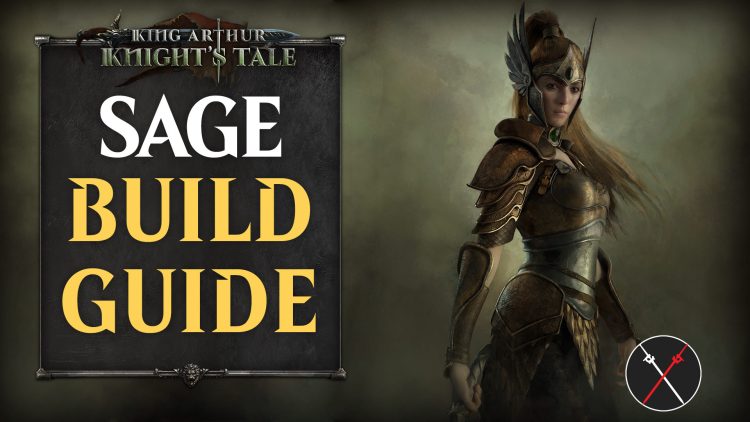 The Sage is similar to the Arcanist in the sense that they use Spells like Frost and Fire to attack an opponent. They are also adept when it comes to inflicting Status Effects to Freeze the enemy or Burn them to the ground. But the former Class is more geared toward supporting their allies by casting Inspire to grant additional AP or even using Bless to boost the Weapon Damage of their melee fighters. 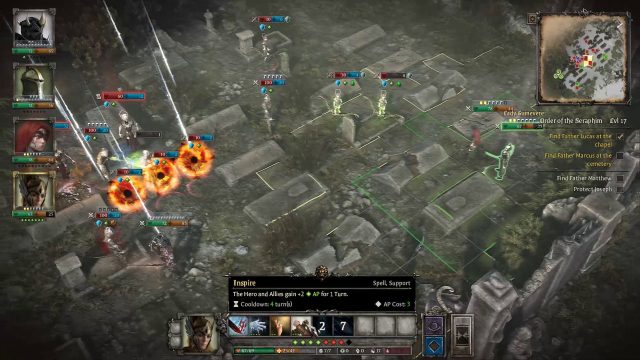 Sages like Lady Guinevere and Sir Lucan are able to do these effectively because of their Teleport and Dash Skills, which allow them to quickly move from one point to the next. Unlike in traditional RPGs, however, you don’t have the capability to restore the Vitality, HP, or Armour of your comrades.

Similar to Arcanists, you should prioritize raising Weapon Damage and Spellcraft Stats. Doing so boosts your overall damage effectiveness while providing you with essential information to identify Shrines, which grant buffs. Additionally, Spellcraft helps the Sage perceive hidden loot while exploring that can lead to obtaining Epic or Relic Runes. If you can spare extra Skill points at higher levels, remember to invest in Physical and Mental Debuff Resist enhancements to lower the potency of corresponding status effects. This should keep you alive longer in midgame encounters. 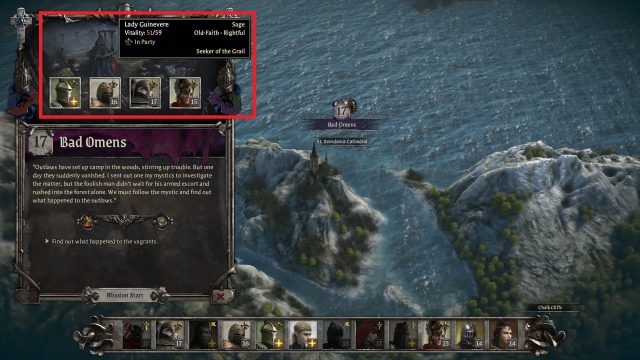 In terms of party composition, the Defender is a must-have class to shield you and your allies from taking huge damage. You should then include another melee fighter such as a Champion or Vanguard, a ranged Hero like a Marksman or Arcanist, and finally, the Sage. Unlike the other classes, having a single Sage is enough to annihilate multiple enemies faster.

Every time Heroes level up, they gain 2 skill points. However, they can receive more by activating Shrines, consuming Tomes of Proficiency from exploration, and unlocking perks in Camelot. King Arthur: Knight’s Tale features active and passive Skills. Active skills differ for Heroes belonging to identical classes but this is not true for passive skills that are mostly the same. In this guide, we will discuss Lady Guinevere’s best abilities to prioritize upon reaching Level 15 while talking about Sir Lucan’s essential skills. You can recruit Lady Guinevere as you progress through Act 2. For Sir Lucan, you are required to accumulate 8 Rightful Christian Morality points before gaining access to his respective Mission, which is called The Atonement of Sir Lucan. Completing it will allow you to invite him to the Round Table. 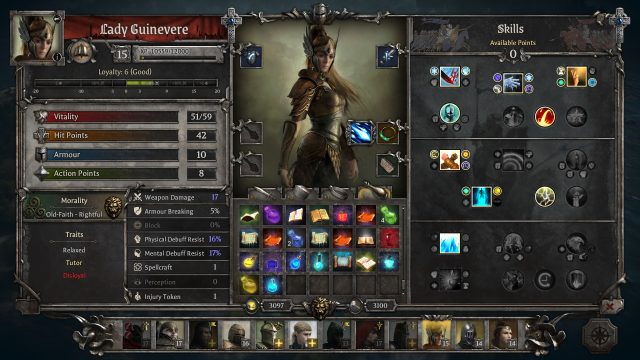 By the time you reach Level 15, you will have gained access to all skill tiers and have invested a total of 28 points from progression alone. At Level 1, Lady Guinevere automatically has access to Strike and Bless with a couple of extra abilities that have been prepopulated. Note that you will have to change and add the following skills and enhancements, which are listed in the order you should take them.

Strike – This is the Sage’s normal melee attack. What differentiates it from the rest, however, are Chilling Touch and Splinter. Chilling Touch inflicts Chill, thereby lowering the AP usage of affected enemies, while Splinter boosts Strike’s Weapon Damage against Frozen targets. The latter is especially essential and is often used as a way to execute them when coupled with Freezing Attack, which we will discuss later on.

Bless – This amplifies the Weapon Damage dealt by melee Heroes such as Sir Mordred and Sir Lancelot. In addition to Lasting Bless and Lighten, you will want to invest in Mass Blessing. Doing so will raise Bless’ duration, provide the target with +1 AP, and grant additional Melee Weapon Damage to the rest of the party, making the skill highly effective and worth it. 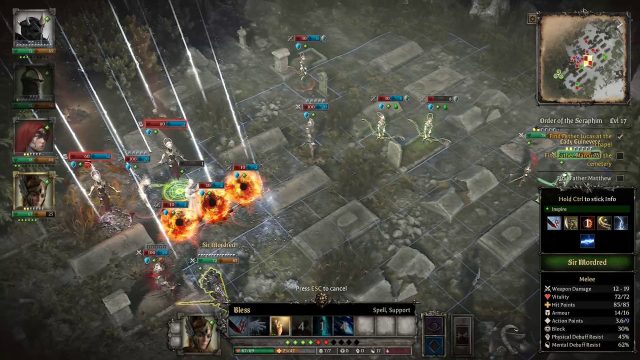 Freezing Attack – This is a potent offensive Spell that instantly freezes the enemy for 1 turn. To make Freezing Attack much more effective, you are going to want to unlock all of its respective enhancements starting with Lasting Cold and Vulnerability, followed by Brittle Armour and Chilled to the Bone. Lasting Cold inflicts Chill for 2 extra turns after the enemy has been thawed, making the skill extremely useful against bosses with high Vitality and HP. Vulnerability raises any damage inflicted on them. Brittle Armour boosts Freezing Attack’s Armour Breaking capability while Chilled to the Bone reduces the ability’s cooldown period. 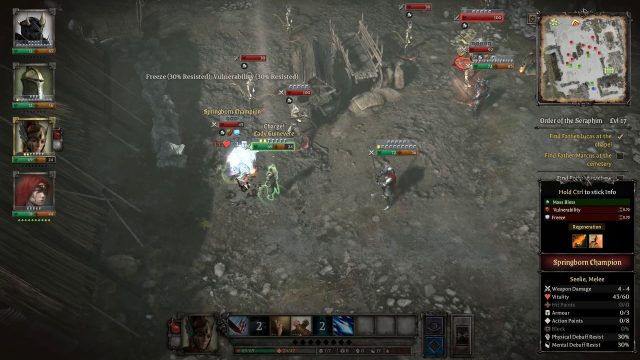 Inspire – This grants your allies additional AP. The enhancements you ought to take to make Inspire a highly effective skill are Tranquility, Unbind, and Mobilize Self. On top of the extra AP gained, Tranquility lowers the cooldown rate of everyone’s abilities. Unbind removes the Freeze, Chill, Slow, and Stun status effects. And Mobilize Self reduces Inspire’s cooldown further.

Teleport – This is a must-have skill as it allows Lady Guinevere to quickly move from point A to point B. The essential Teleport enhancements to take are Far Reach and Time Shift, which increase the ability’s range and reduce its respective AP, respectively. 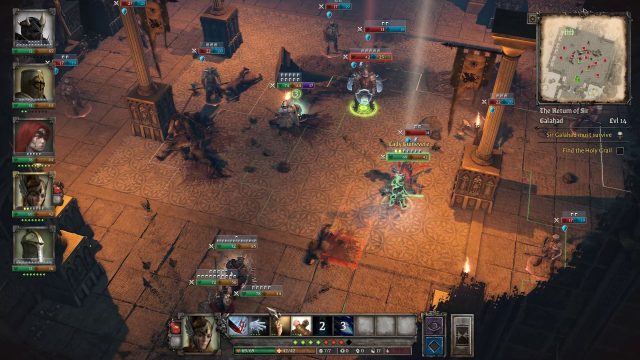 Enchanted Weapon – Even if this only slightly boosts your Weapon Damage, you are going to need it since you don’t deal as much raw damage compared to the other classes.

Soothing Words – This passive automatically restores the party’s HP after every encounter, making Soothing Words a very handy skill to have. When you obtain extra skill points at higher levels, be sure to at least invest in Healer to further raise the amount of HP everyone regenerates.

Ice Wall – If you are constantly finding yourself losing too much Armour, HP, or Vitality, you can alternatively prioritize Ice Wall. This skill allows you to build a wall, which acts as a cover to reduce the ranged damage you receive by half. Once you have additional skill points, you will want to allocate them to Reinforced Wall and Permafrost. Reinforced Wall enhances the wall’s Vitality while Permafrost lengthens it further from 3 to 5 tiles. 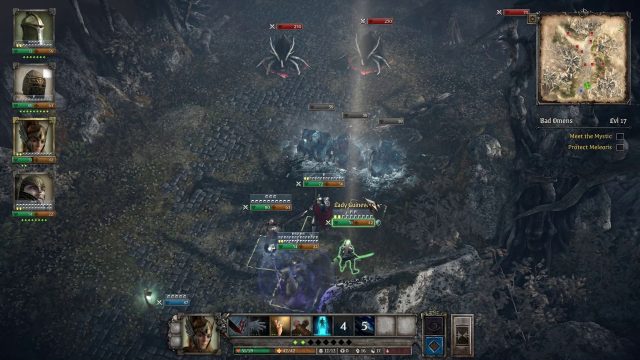 By the time you recruit Sir Lucan, he will be Level 9. He is a suitable alternative to Lady Guinevere but rather than casting Freezing Attack, he utilizes a Fire Spell known as Cleansing Fire. In this section, I will go through Sir Lucan’s unique skills that make him a decent Sage in your party.

Dash – This lets you quickly move to a new location, much like Teleport. On top of Sprint, which reduces Dash’s AP cost, you will have to change Keen Eye to Extended Dash since you are not going to make use of Overwatch for this Build. You should also invest in Persistence. This combination increases the range you cover and lowers the skill’s cooldown period.

Cleansing Fire – This is a powerful ranged spell that allows Sir Lucan to not only deal considerable Weapon Damage but also inflict Burning. What makes Cleansing Fire potent are all of its enhancements starting with Fiery Purge and Conflagration, followed by Fireborn and Rekindle. Fiery Purge amplifies Weapon Damage and Conflagration raises the duration of Burning while Fireborn and Rekindle lower Cleansing Fire’s AP cost and cooldown, respectively. 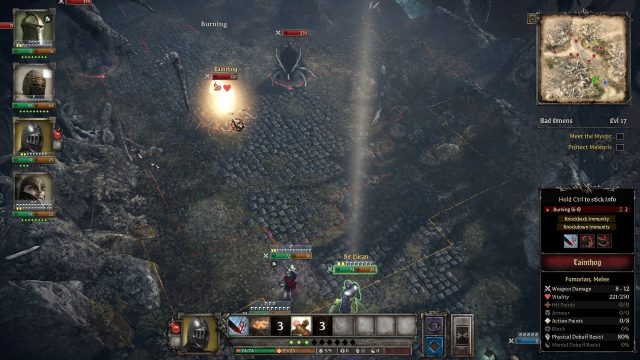 Monster Hunter – This is an alternative to Soothing Words if you intend to focus on dealing greater Weapon Damage.

In King Arthur: Knight’s Tale, you can bring up to a maximum of 4 Heroes per Mission. For party composition, you should choose between Lady Guinevere or Sir Lucan since only 1 Sage is necessary to buff the party. Having 2 Sages wouldn’t be as effective since they don’t deal high Weapon Damage unlike the rest of the Heroes. It should then be mixed in with a Defender, Champion or Vanguard, and Marksman or Arcanist. 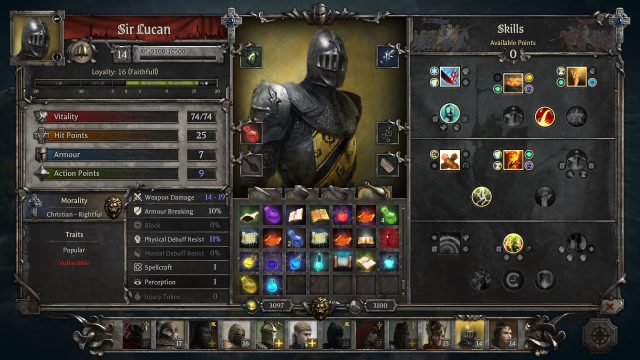 The technique is to have at least 2 melee fighters who will benefit from Bless and 1 ranged class to pick off enemies from a distance. This is an acceptable party composition due to the strengths each Hero brings in terms of dealing potent melee and ranged damage while inflicting status effects.

In terms of Morality, Lady Guinevere believes in the Old-Faith Rightful path while Sir Lucan is a Christian and Rightful character. As long as you don’t deviate too far from the Rightful Alignment, you will not encounter issues when it comes to their Loyalty toward you. In fact, maximizing this to 20 should considerably enhance their overall damage by +20%, which they need, while providing them with +1 AP. 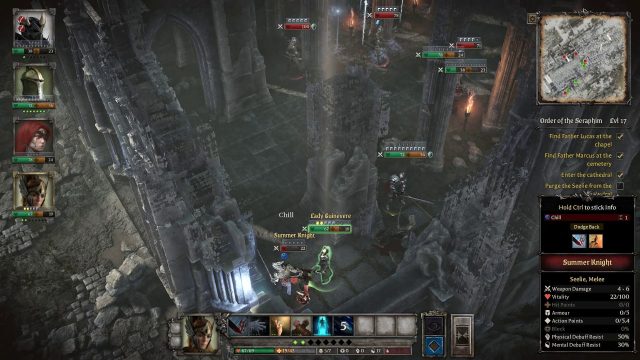 When it comes to the Sage’s Equipment, you should equip the Frostbitten Rune of Gouging as this amplifies the damage Lady Guinevere deals against Chilled and Frozen enemies. Meanwhile, for Sir Lucan, he can wield the Rune of Undealt Death from the Enchanted Tower because it considerably improves his overall damage together with the chances of dealing double the damage. 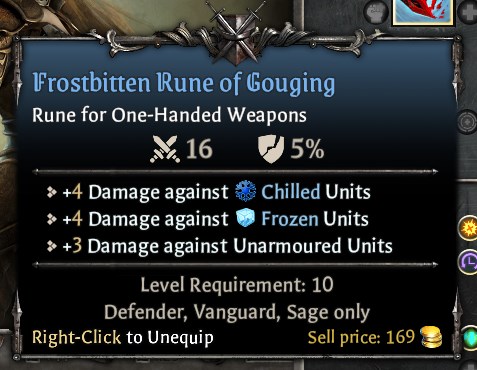 In terms of Medium Armour, they should equip the Mending Sigil of Retort from exploration to receive extra Armour based on their HP, enhances damage against melee targets, and provides additional Physical Debuff Resist. Another decent Armour to don is the Celestial Marksman Seal, which is obtained from the Enchanted Tower because it notably increases the Sage’s HP and Armour while granting them +1 Movement AP, +1 tile for ranged Spells, and the ability to dodge their first Attack of Opportunity. 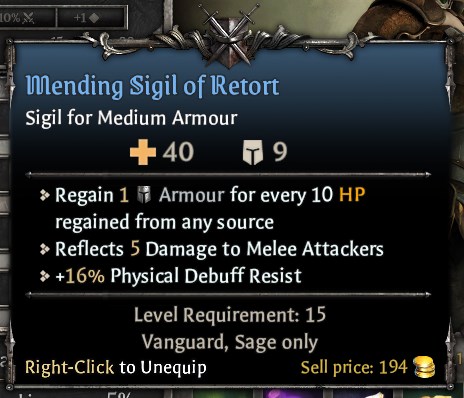 For Trinkets, it’s best to equip the Conjurer’s Ice Gem and Tome of the Wildmage. The gem synergizes well with Lady Guinevere’s Strike and Freezing Attack as it grants extra damage against Chilled enemies while reducing the cooldown of Frost Spells in general. Meanwhile, the tome further improves Weapon Damage against Chilled and Frozen targets once again. Alternatively, you can also wear the Winter of Court Circlet from exploration because it lets you cast the Ice Rain Spell. This not only raises the damage dealt to slowed creatures as a result of the spell but also increases the damage reduction from any form of cover.

Furthermore, remember to bring Stoneskin and Healing Potions to restore Armour and HP, respectively. You should also strive to get the following Essences – Spellcraft, Life, Dodge, Poise. You can obtain these from the Challenges tab of the Journal. Life increases HP that works well with the Mending Sigil of Retort to also increase Armour. Spellcraft grants +2 Spellcraft. And finally, Dodge and Poise improves dodge chances and makes you immune to Stun, which is debilitating at higher levels.

For the King Arthur: Knight’s Tale Sage, it’s best to stay near melee Heroes like Sir Mordred and Sir Balan who will act as covers. You should then prioritize casting Bless first in order to buff them before harming your enemies. When you do, make sure to target those who are alone to avoid getting swarmed by the others. It’s also a good practice to teleport behind them to deal Backstab Damage, which enhances damage by 30%.

Lady Guinevere is a much better option than Lady Isolde even if the latter’s level is higher when you recruit her in Act 2. The reason is Lady Isolde doesn’t have Teleport or Dodge, thereby compromising her ability to quickly move to a different location. As such, she is unable to save her AP for more important skills such as Frost Spells that deal decent damage. 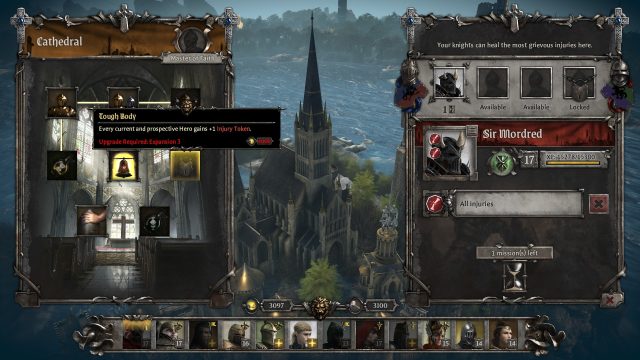 In Camelot, remember to invest in the Training Ground’s Basic and Advanced Training Perks to raise your HP as well as the Merchant’s Armoursmith and Master Blacksmith first to gain +2 Armour. It’s also ideal to unlock Archive in the Enchanted Tower to acquire +1 Skill point for the Sage. Lastly, consider unlocking the Cathedral’s Tough Body Perk when you have enough Gold to grant them +1 Injury Token.