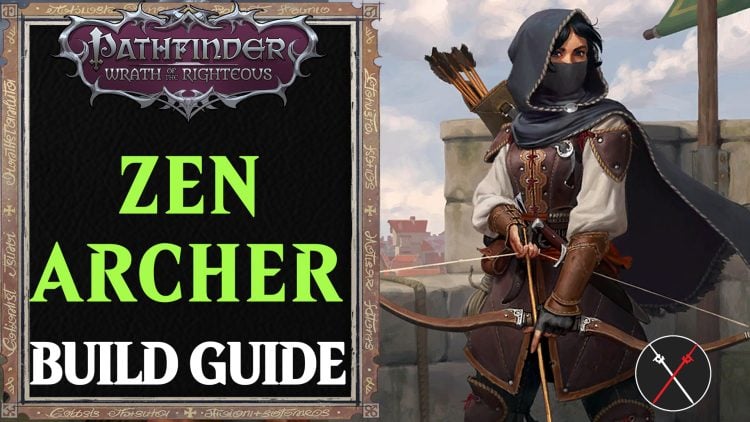 From Levels 1 to 20, we’re going to purely level up as a Zen Archer Monk to be able to take advantage of the powerful Monk Abilities we gain at later levels. Zen Archers specialize in dealing massive damage via Full Attacks. Due to your Base Attack Bonus (BAB), Flurry of Blows, and Ki Power: Extra Attack, you’re able to attack a total of 7 times compared to other Archer Builds. With Flurry of Blows, you gain two extra hits at Levels 1 and 11. 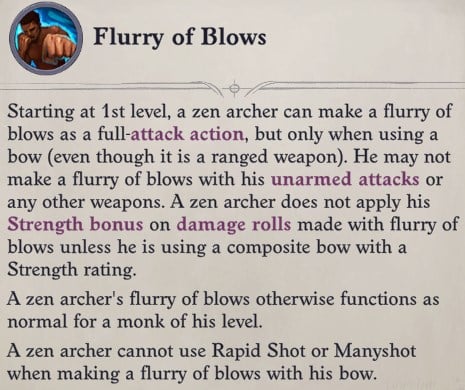 Furthermore, you add your Strength Bonus to Damage Rolls when wielding a Composite Longbow or Shortbow, making either of them the Ranged Weapon of choice. Remember, however, that you can’t use Flurry of Blows with Rapid Shot nor Manyshot so we won’t be selecting these Feats. You can’t switch to Unarmed Attacks either, otherwise, this Class Feature won’t take effect.

Meanwhile, at Level 3, you gain access to Ki Power: Extra Attack, which uses Ki Pool Points. These points are based on ½ of your level + Wisdom Modifier. Before the start of an encounter, you’ll need to activate this Ability to receive one additional attack. However, make sure you’ll be making a Full Attack, otherwise, you’ll just waste this. At the same level, you’ll start using your Wisdom Modifier rather than the Dexterity Modifier on Attack Rolls, which is also the reason why this Build’s default Wisdom Score is high to begin with. 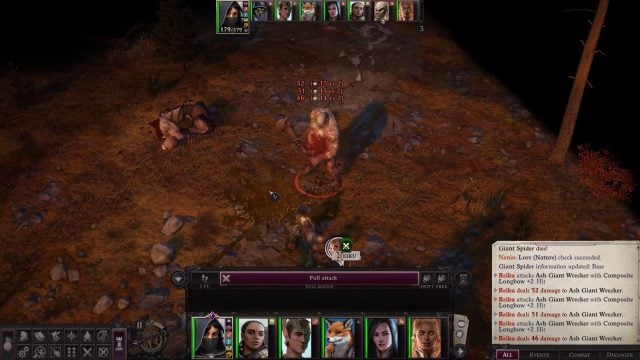 Upon reaching Level 5, you acquire Ki Arrows, which lets you use Unarmed Strike Damage in place of your Weapon Damage. This is advantageous in the long run especially when you have an ally who can cast the Enlarge Person Spell on you all the time. With Unarmed Strike, the damage you inflict is much higher. For instance, if you become Large in size at Level 20, you’ll be able to deal a base damage of 4d8 instead of 2d10 from your Composite Bow. In spite of using Unarmed Strike for damage, you still utilize Ranged Attacks with a Bow, making you deadly in Combat.

As a Monk, you receive AC Bonus as long as you don’t wear any Armor. What this passive does is it adds your Wisdom Bonus to Armor Class (AC) on top of your Dexterity Bonus to improve the chances of dodging attacks. You further gain +5 AC at Level 20 boosting this defensive stat even more. Another reason to avoid equipping Armor is to retain the benefits of Flurry of Blows as well as Fast Movement. 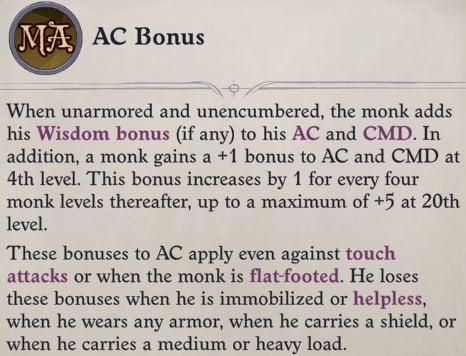 In addition to these highly potent Abilities, you not only gain free Feats but you get to choose Bonus Feats as a Zen Archer. With respect to the former, you receive Perfect Strike, Point-Blank Master, and Snap Shot at Levels 1, 3 and 9, respectively. Perfect Strike allows you to make two Attack Rolls where the greater value is considered so the chances of hitting enemies is much better. Point-Blank Master prevents triggering Attacks of Opportunity when you execute Ranged Attacks while threatened. And finally, Snap Shot improves your chances of performing Attacks of Opportunity as long as the enemy steps within your threatened area.

When it comes to the Zen Archer’s Bonus Feats, you should select the following at different levels:

By the time you choose Weapon Focus, you ought to decide what specific Bow you’ll use, whether it’s a Longbow or Shortbow, in order to accumulate as many Attack Roll Bonuses for the same Weapon as possible. As such, you’re able to hit enemies most of the time. For instance at Level 3, you’ll be asked to choose from several Weapons you’d like to specialize in for the Point-Blank Master Feat. For the other Bonus Feats like Dodge and Combat Mobility, you’re essentially improving survivability by boosting AC with Dodge Bonuses. 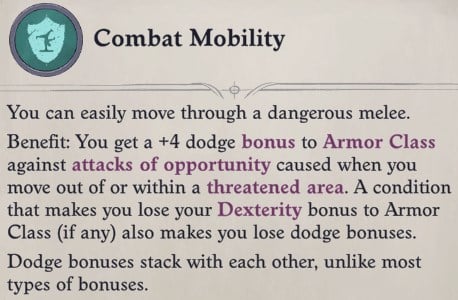 The best Race for this Zen Archer Monk Build is the Aasimar because it allows you to choose the Plumekith (Garuda-Blooded) Heritage. It provides you with bonuses to Dexterity and Wisdom, which are some of the primary Attributes of your character, as well as Mobility and Athletics. In terms of the Background, you can choose anything that fits your playstyle. 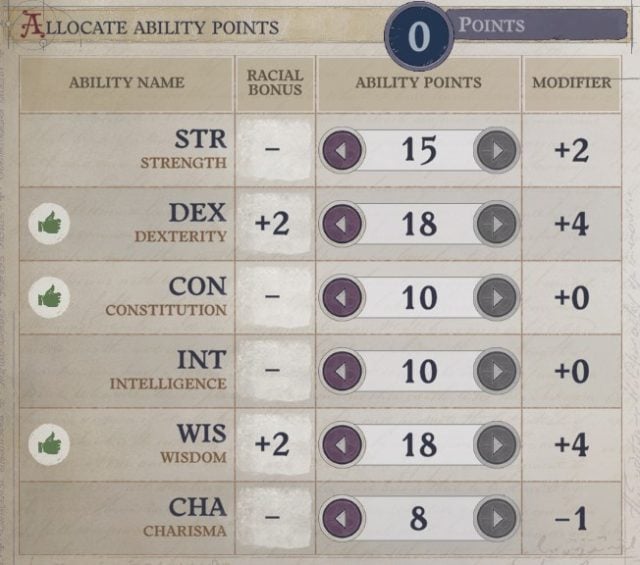 Starting at Level 4 and after every four levels, you’ll be able to add 1 point to any of your Attributes. For this Build, you’ll only allocate points into Strength to greatly enhance damage. To boost this even further, you need the Belt of Physical Flow +2. In total, you’ll attain 22 Strength with a +6 modifier. 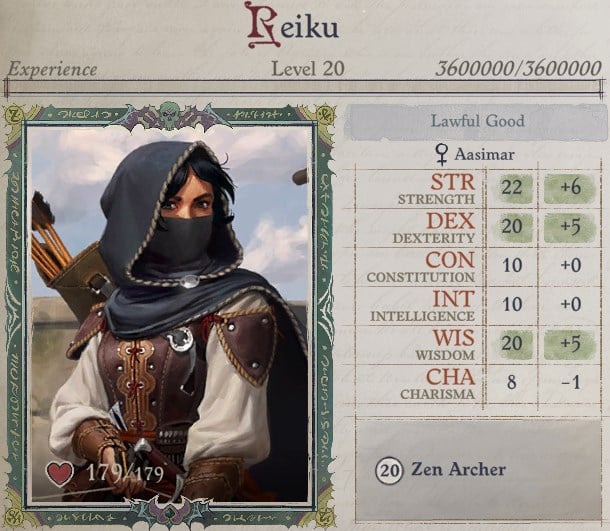 For Skills, it’s good to invest in Stealth, Mobility and Athletics due to the bonuses you initially receive with these. Stealth reduces the volume of random enemy encounters when traveling via the global map or while resting. Similar to Mobility, it also lets you to move past them undetected so you lessen the chances of provoking Attacks of Opportunity. 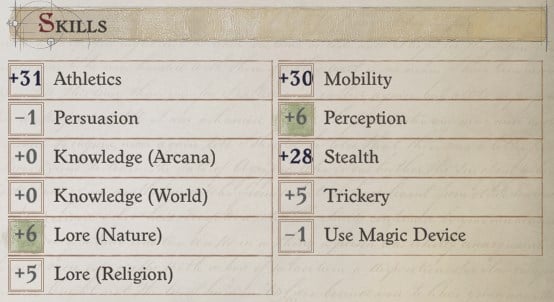 Meanwhile, Mobility and Athletics help you travel across difficult terrain with ease, jump long distances, and push heavy obstacles away to move forward in quests.

From Levels 1 to 19, you’ll be able to choose 10 Regular Feats for your Machinegun Monk with 1 Feat at every other level. You’ll be raising your defenses and choosing alternatives to efficiently kill weak and average targets. 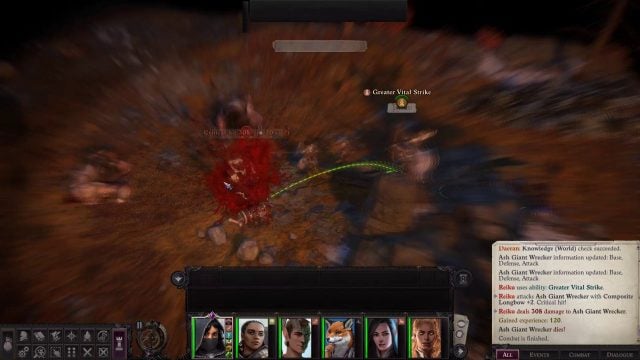 What you want with these Feats is to gain additional options when it comes to dealing damage. Given that you inflict higher damage using regular Ranged Attacks, it’s also important to have supplementary Abilities, which allow you to quickly kill weaker enemies. This is the reason why you have Vital Strike related Feats. Greater Vital Strike not only grants 4x Weapon Damage, but it also considers other Damage Bonuses such as your Strength Bonus from wielding Composite Bows. 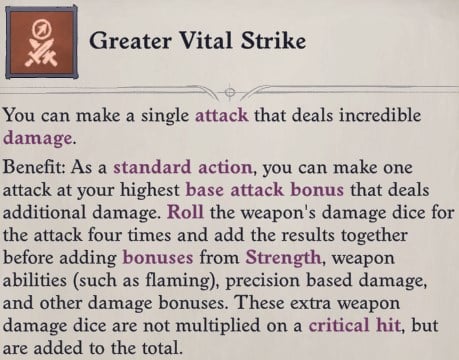 In terms of regular Ranged Attacks, there’s Clustered Shots. Instead of lessening the damage you inflict with each of your attacks due to the target’s Damage Reduction (DR), you only do it once. As a result, you’re able to inflict much more harm on all 7 attacks provided that you perform a Full Attack on your turn. 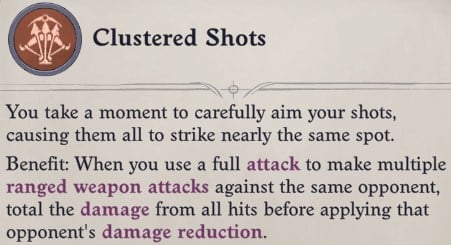 Lastly, you have Toughness, Crane Style, and Wings to continue building your resiliency in combat. With Crane Style, if you were to Fight Defensively against difficult foes to raise AC, the penalty you receive for Attack Rolls will now be -2 instead of -4. Wings, on the other hand, grants you additional Dodge Bonuses to AC against Melee Attacks so you enhance your defenses while performing Attacks of Opportunity thanks to the Snap Shot Feat.

Rather than Spells, Zen Archer Monks gain Ki Powers as an extension of their Ki Pool. This provides them with unique Abilities to deal additional damage or to survive better in encounters. The ones you ought to choose include:

The most important Ki Power to obtain at lower levels is Barkskin because it acts like Mage Armor. Barkskin grants you increasing Enhancement Bonuses to AC depending on your level. At Level 12, your AC is raised by +5 as a result. Note that this Ability’s bonus doesn’t stack with the Amulet of Natural Armor so unless you happen to obtain the +6 Version of this Amulet, then it’s advisable to continue casting Barkskin. 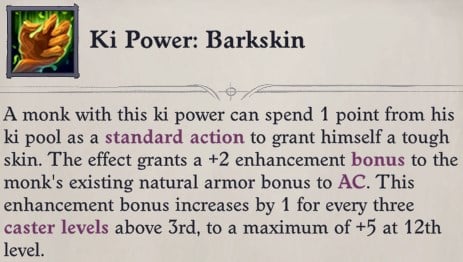 The other good Ki Powers are Diamond Body, Diamond Soul, Quivering Palm, and Wholeness of Body. Diamond Body makes you completely immune to poison while Diamond Soul boosts your Spell Resistance so you can’t easily be attacked by Damage Spells. Quivering Palm is effective against creatures with low Fortitude Saves because if they don’t overcome the Ability’s DC, they instantly die. Lastly, Wholeness of Body lets you restore some of your HP. 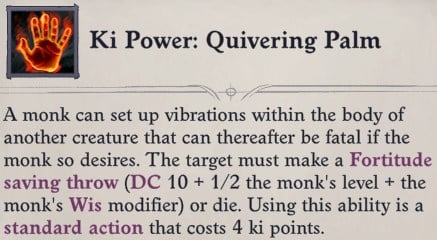 For this Build, you can choose any Mythic Path depending on your roleplaying preference. You should, however, pick these 10 Mythic Abilities and Feats to enhance your defenses and Ranged Attacks:

The idea behind these Mythic Abilities is to start taking advantage of missed Ranged Attacks with Ranging Shots. It provides you with stacking bonuses to Attack Rolls so you improve the chances of finally hitting targets. You also want to increase your Ki Pool Points since you’ll be using powers that consume more than 1 point at higher levels. Finally, with Cleaving Shot, you mainly utilize Critical Damage to be able to deal the same amount of Weapon Damage against the rest of your enemies. 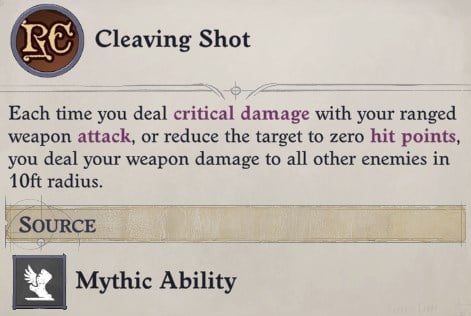 When it comes to your Machinegun Monk’s Weapon, it’s ideal to equip a Composite Longbow or Shortbow. A simple Composite Longbow +2 or Hunter’s Assurance Composite Shortbow would do. Next, instead of donning Armor, you’ll be wearing the Bracers of Armor together with the Cloak of Resistance, Ring of Protection, and Robe of Order. This robe increases your Ki Pool Points as well as Attack Rolls due to your Lawful Alignment. 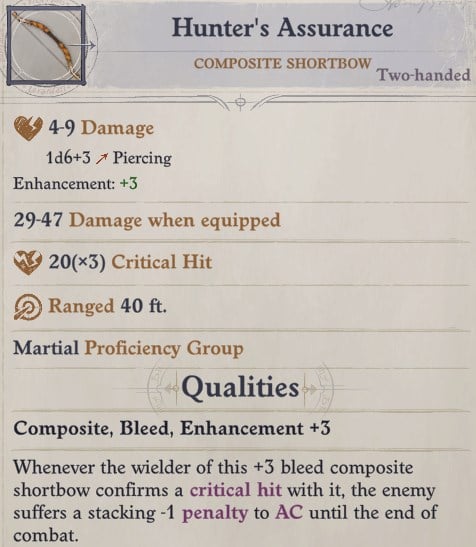 To increase your Wisdom Score, remember to wear the Headband of Inspired Wisdom, which can be bought in Drezen for a low price.

The Zen Archer Monk Build is one of the simplest and most effective Builds out there. There’s no need to multiclass with another Archetype since it’s already powerful on its own. You’re able to maximize the amount of Unarmed Strike Damage you deal from afar with your first 4 attacks, which includes Ki Power: Extra Attack, while utilizing your highest BAB. As such, you can easily kill at least one enemy during your turn. But remember to have a Companion like Camellia to cast Enlarge Person on you to further boost damage. Additionally, you have a decent AC of 39 with your own buff and Equipment alone. 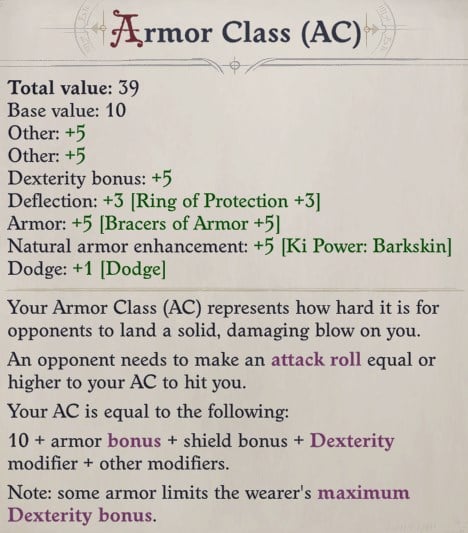 Starting at Level 3, you’ll gain several Ki Strike Class Features for the purposes of bypassing the target’s DR. Note however, that you won’t be using any of these since they only pertain to Unarmed Attacks, which you can’t perform as a Zen Archer because of Flurry of Blows. This shouldn’t be a big deal since you can either apply the Magical Property on your Bow using Bless Weapon and Crusader’s Edge Spells or switch to an entirely different Bow to overcome their DR and deal full damage. 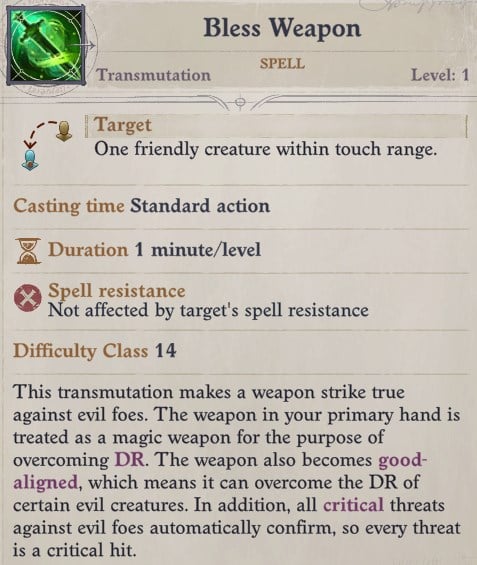 Stay tuned for more Class Build Guides and be sure to check our Twitch Channel or the Pathfinder: Wrath of the Righteous Wiki if you have questions on the game! Be sure to check out our other Pathfinder Wrath of the Righteous Guides like the Primalist Bloodrager, Faith Hunter Inquisitor, Eldritch Archer Magus,  Bloodrager Class, Arcanist Class, Cavalier Class, Top 5 Archer Builds, Best Class to Play, Delamere, Arueshalae, Greybor, Regill, Sosiel, Woljif, Daeran, Wenduag, Ember, Nenio, Lann, Seelah, Camellia, and Beginner’s Guide!