In this Wolcen Builds Guide were going to be covering a Ranger Build that focuses on the use of Arrows and Ice to Freeze and destroy enemies from range. Wolcen has a complex Passive Skill tree (Gate of Fates) that can be difficult to figure out, and many mechanics are not always easy to min/max. In this Build Guide I’ll explain how to get the most from this Build, so if you’ve been struggling to find a good Ranger Build, then this Guide is for you.

Note that this Build Guide has been updated (February 23rd, 2020) since the release of the video and where there are discrepancies between the two, you should follow this written guide instead.

The White Arrow Wolcen Build uses a combination of passives that allow you to fire multiple Projectiles that bounce off your targets hitting many others at the same time. Additionally, it adds Frost Damage to your attacks, allowing you to Freeze enemies, preventing them from taking any action at all while you range them down with prejudice. This helps prevent damage to you, and at the same time you gain increased damage from not taking any.

This Wolcen Build also takes advantage of high Critical Damage and Critical Chance, and the reason for this is that it is currently the most effective way to increase damage. To my knowledge all +% Damage modifiers are currently additive in Wolcen, meaning they all add together before they are calculated against the base value of a Skill or Weapon. This makes them much less effective than they appear, however, Critical Damage is multiplied against these Modifiers making it much more effective. This requires a high Critical Chance though to take advantage of, which is why this Build focuses on it.

Since this Build depends heavily on Critical Chance to pump out damage, so half of your points will be placed into Ferocity. This will give you the highest Critical Chance possible and gives you the most damage per point spent (0.5%) because it will be your Primary Attribute. Agility is also important because you need to attack quickly in order to strike enemies often, so you want to aim to split these two fairly close together. This will also help you get the best use of Attack Speed passives like Backline Raider.

In this section we’ll take a look at what Skills should be on your Skill bar to make this Build work. There is really only one must have Skill for this Build, giving you a lot of freedom and flexibility, but since we have a huge focus on Frost I have included the ones that synergize the best with that damage type here.

This is your default attack with a Bow and is the only way you can cause Projectiles to bounce so you will be using this one a lot. It also builds Rage, which you will need to cast your other Skills so you will open with this generally, and you’ll find it will carry you a good amount of the way through the game once the Build starts coming together. Because of the Skill Archion’s Teachings it will fire two arrows at once by default, really helping to spread the damage out and Freeze enemies. 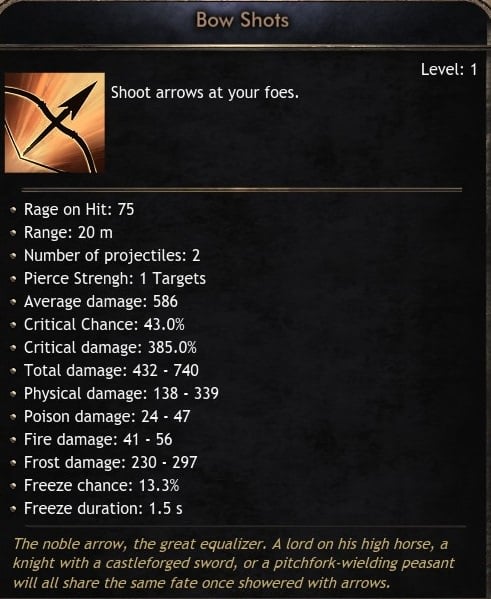 This Skill is much more useful early on in the game than it is later, and will help you deal with packs of enemies during Act 1. You can convert it to Frost Damage by taking the Whitefield Arrowheads Skill Modifier, and you should look to take Pulmonary Strike for increased Critical Chance and Cruel Songbird for increased Critical Damage as well.

This Skill is very situational and is great when you are overwhelmed and have to constantly move. Shoot it up and AoE an area while you run around, rinse and repeat. Additionally, if you take the Skill Modifier Black Cloud you can take better advantage of your Critical Damage, resulting in huge AoE damage. Be sure to take the Eagle Eye and Broadhead passives for increased Critical Chance and Damage.

This Skill will fire two Projectiles once you gain the Archion’s Teachings passive, does MASSIVE damage, and is a must have. You can convert it to do Frost Damage to take advantage of the Frostbite passive by taking the Bladed Blizzard Skill Modifier. You’ll also want Butterfly’s Eye and Gutting Wheel to increase Critical Chance and Critical Damage, and Gliding Friction to leave a trail of Frost on the ground that does damage over time.

This skill is mostly used for a Damage buff since it’ll add a 30% increase in Shadow Damage per strike. That’s a lot of damage. It also gives you a huge Movement Speed buff when you take the Light’s Swift Retraction Skill Modifier, helping you get around maps more quickly. Shifting Along Walls will also make your Force Shield begin to regenerate instantly when dropped which helps out. In short, keep this up at all times if possible.

Figuring out how to align your Gate of Fates is one of, if not the hardest part of making a Build in Wolcen, and generally takes a respec or two before gotten right. In this section, I want to show you how I’ve set this up for maximum performance. 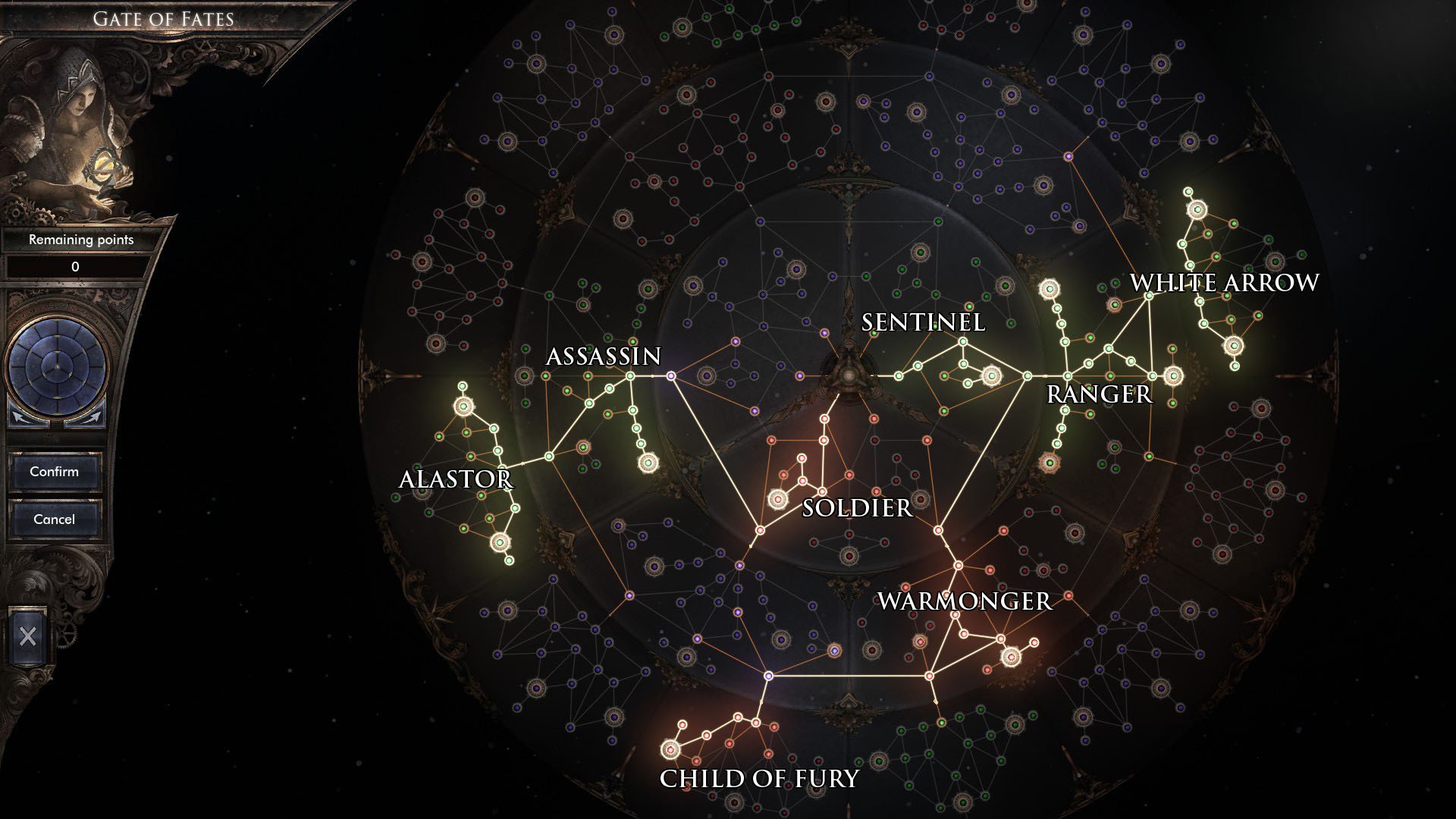 An obvious choice for any ranged character, you’ll make your way through here picking up Refined Technique and Precise Strikes for extra Projectile Damage, Attack Damage and Critical Chance. Be sure to grab Backline Raider as well before heading to Ranger, for increased Attack Speed, since you’ll be lacking points here.

You’ll be spending a lot of time in this tree picking up tons of passive skills. There is lots to love here. Grab Shoot to Kill and make your way up to Archion’s Teachings to get your extra Projectile ASAP, making sure to grab Bullseye. Then grab Deadly Aim, Swiftness, and Swift Death. Safe From Afar is one of the largest damage increases you can get that is not Critical-based so you’ll want to make sure to pick that up. Persistence Hunting and Overwhelming Barrage are also good, so grab them as well. You’ll want nearly this whole tree.

White Arrow is next up and you’ll be looking to get to Wintry Hail as quickly as possible, as this allows your Projectiles to bounce. You cannot have Pierce on them for this to happen, which you will have, but all this does is allow your Arrows to Pierce before bouncing, and because you’ll be picking up Hungry Stalactite eventually those Projectiles that do Pierce will have increased damage before they bounce. Make sure to grab Ice Shall Wake and Frostbite for some more Critical Damage and Frost Damage, and pickup Acute Tracking for even further damage.

Up next is Soldier, and this might seem like an odd choice for a ranged build, but it’s one of the few trees that contains Critical Damage in its passives so we quickly pick up Heavy Blows and Zealous Might. Then we head over through Scholar into Assassin.

Once in Assassin you’ll want to head for Merciless Lethality immediately. This will give you a whopping +100% Critical Damage in exchange for -30% Damage on non-crits. That might seem like an extreme trade off, but remember -30% is additive and Critical Damage multiplies against your final damage value. This is a huge damage boost on Critical Hits immediately. We take this later in the game when our Critical Chance is higher so we don’t nerf our damage early on. Take Slipping Shadow later on in the game when you find that you need to Dodge more.

Alastor is up next, and here we get some more Critical Chance in the form of Pulse Control and Shock Invasion, and gain some much needed Attack Speed in Intravneous Neural Cord, Cautious Effort and Condensator. Grab Static Transferal to increase your Damage from all the Basic Attacks you’ll be doing, and double the damage of your Phantom Blades and Wailing Arrows.

Next up is Warmonger where you will want to grab Unleashed Power and Feast For The Crows to increase Attack Damage and give you Life Leech. Be sure to pick up Tearer of Flesh as well for even further Life Leech.

Last is Child of Fury and the goal here is to get Furious Appetite and Frenzied Blows as quickly as possible. This will allow you to regenerate Rage and doubles the damage of Wailing Arrows and Stings of Krearion when used above 750 Rage, which they will be most of the time. Flurrying Flames is also amazing for this Build as it will allow you to build up tremendous Attack Speed, pumping out the damage, so make sure to get it.

In this section we’ll be covering the type of equipment that you want for the White Arrow Build. The first thing you’ll want is a Bow that ideally has Frost and Physical Damage on it, and some Offensive I sockets. If it doesn’t have these Sockets, but you have a bow you really like, you can reroll the Sockets at Zanafer Stark for nearly no gold, so be sure to do it. Offensive I slots will allow you to drop Diamonds or Copperstone into your Bow adding additional Frost or Physical Damage.

You need Frost Damage to have any chance to Freeze enemies, so make sure you have it and don’t switch Bows unless it has Frost or you can add Frost. It doesn’t have to be a tremendous amount but it needs to be the second highest behind Physical Damage in order to Freeze enemies. 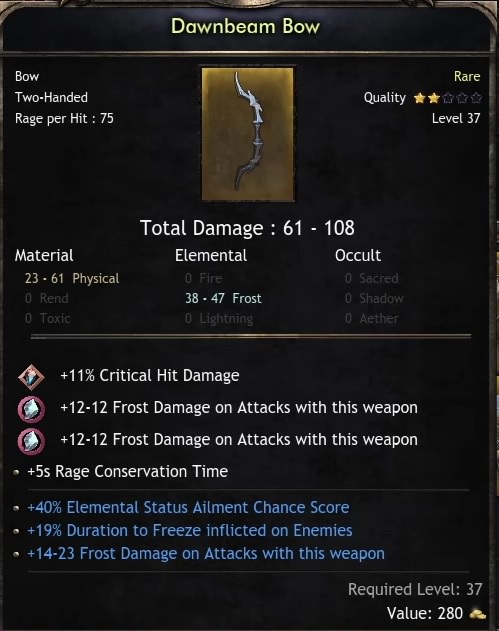 Armor wise look for +Agility and +% Damage. This will add damage to both Damage types (Physical and Frost). Cooldown Reduction is also nice to have for Wailing Arrows and Duskshroud, so try to get at least a couple pieces with that on it.

Look for flat damage increases like +10 Frost Damage or +15 Physical Damage on attack on Accessories. You want to make sure it’s on Attack and not Spell Cast. Then look for Critical Chance or +% Attack Damage. Additionally, slot them with Support I Sockets that contain Alexandrite for further increased Critical Chance. +% Frost Damage and +% Physical Damage here is not overly useful as it provides nearly no extra damage.

Be careful when picking Skill Modifiers for your Skills to not take a damage type that isn’t Frost because it will overwrite the Freeze chance with the Status Ailment of that damage type. For example, if you take Flames of Envy on Wailing Arrows it cannot Freeze, but will Burn enemies instead. It may do increased damage, but it will no longer crowd control. Keep this in mind and decide whether it’s worth the trade off.

Make sure to unsocket gems from your old Weapons and Armor before selling them. You’ll want the Diamonds and Copperstone for Frost or Physical Damage. These are not always easy to find so there is no point in wasting them. Better to lose a bit of gold then have to farm an hour to get one. 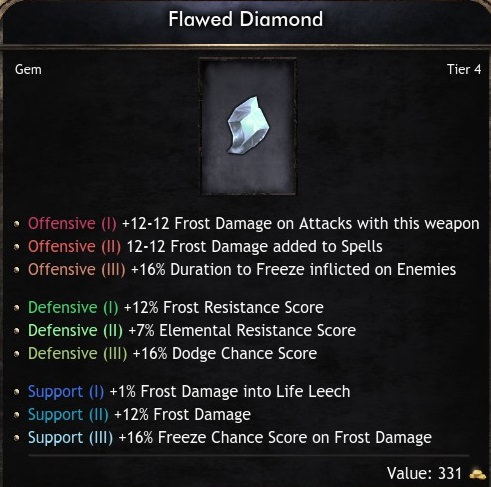 Lastly, this is a very offensive build that counts on the Freeze Ailment to prevent you from taking damage. If you can out damage your enemies then you do not have to worry about being hit. When it comes to Boss fights you will need to Roll Dodge to avoid damage. This is an all or nothing Glass Cannon Build, so go all out on damage and roll when you need to.

Be sure to check out our other Wolcen Lords of Mayhem Guides, and stay tuned for more Builds, including Beginner and End Game Builds, such as the Wolcen Mage Build: Oracle of Flames.