In this Wolcen Builds Guide were going to be covering a beginner Melee Caster Hybrid Build that focuses on the use of Aether Damage and the Stasis Ailment, dealing incredible AoE damage. Wolcen has a complex Passive Skill tree (Gate of Fates) that can be difficult to figure out, and many mechanics are not always easy to min/max. In this Build Guide I’ll explain how to get the most from this Build, so if you’ve been struggling to find a good Hybrid Melee/Caster Build, then this Guide is for you.

The Stasis Knight uses a combination of Melee Skills and one really good AoE spell: Anomaly. In order to use this spell and still use Melee Skills you have to use a Catalyst in your off-hand, which will reduce your Melee Damage. However, you gain an extremely strong spell in Anomaly, and one that can set Stasis on enemies. Stasis slows enemy movement and attack speed, protecting you and keeping them inside your devastating AoEs.

When combat begins you’ll open up with your Rage Skills, and then drop Anomaly once you’ve built up some Willpower. Because we take the passive skill Furious Appetite, Rage is recovered over time instead of Willpower, making this possible. Since this Build leans more to the melee side of things than spell casting, we can get away with little Willpower and Anomaly is a great way to dump it, building up more Rage. You should never need to Basic Attack with this Build, and it’s one of the more dynamic Builds I’ve tested so far.

The Stasis Knight is a Melee Build and that means that you will need to invest a good amount of points into Toughness to keep yourself alive. Additionally, you’ll want Ferocity to increase your Critical Chance, since Critical Damage is one of the best ways to increase your damage in Wolcen. It doesn’t matter which of these is your Primary or Secondary stats, but you’ll want to keep their values fairly similar.

Later on in the game you can invest into Wisdom to get some more Status Ailment chance, when diminishing returns start have a larger impact. You want to create the Stasis Ailment as often as possible in order to benefit from the passive skill Which Time Cannot Heal, which reapplies damage to enemies afflicted with this Ailment after 1.5s. This is a lot of damage, so even a few percentage points increase can go along way. 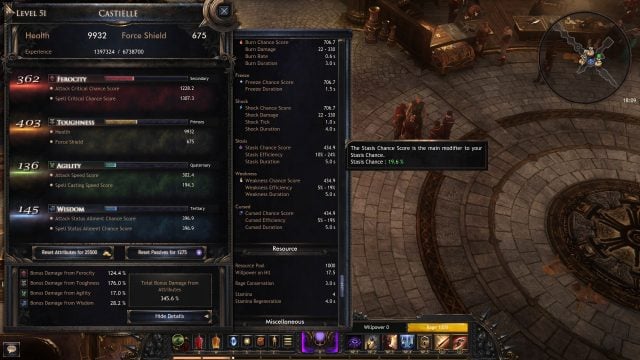 In this section we’ll take a look at what Skills should be on your Skill bar to make this Build work. Unlike other Builds, this one needs nearly all the right Skills for this to work, so you want to get them ASAP. These are:

This Skill’s damage might be the highest in the game, and it does insane AoE damage that just keeps getting stronger and stronger. Once you have the Unstoppable Momentum Skill Modifier you’ll notice a HUGE increase in damage and you’ll never unslot it. It also builds Rage much much faster than other versions, and you can drop several at once stacking damage. The one downside is that it seems to remove Aether Damage from the Skill, which I think is a bug and will be changed in a future update.

Be sure to grab A Taste of Blood for Life Steal that will help keep you alive, and Self-adjusting Principle for a much faster blade that will hit enemies more frequently.

This spell’s damage is just impressive and works exceptionally well for any Build that utilizes AoEs. It pulls enemies inward, grouping them into a tight ball while dealing damage over time and can apply the Stasis Ailment due to its Aether Damage type. You’ll use this as soon as you’ve built some Willpower to dump it quickly, allowing you to keep casting Bleeding Edge.

The only downside to this Skill is its extremely long cooldown, which means that you will absolutely need Cooldown Reduction on your gear and in your passive skills. Taking the Skill Modifier Rending of Matter will allow you to cast this Skill twice per cooldown, which helps tremendously and makes it a must for this Build. You can almost use this at will later on in the game if you have good Cooldown Reduction because of this one Modifier.

I like to take passives that increase the Duration and size for more effectiveness, and these are Dislocating Threads and Temporal Dilation. Additionally, I like to grab Event Horizon to further damage enemies at the moment the spell is cast.

This ability is amazing for pulling you to the enemy, allowing you to get close for Bleeding Edge, but gets really good later on when you take the Arresting Claw Skill Modifier that applies Stasis to all enemies it grabs. Additionally, you can take Unrelenting Hunt Skill Modifier, it will pull in all enemies near you in a 360 degree arc, although at a smaller range. This applies Stasis on all these enemies, and packs them tightly around you, which is perfect.

This ability is great because when you have all the enemies bottled up you can stay in one place and heal yourself to keep on swinging. Regular melee builds cannot use this because they cannot cast spells, so this is an advantage. Additionally, if you take the Sacred Grounds Skill Modifier it does damage over time as well, giving you another DoT to stack on the enemies.

We don’t really need another attack Skill so this one works well on the defensive side to help keep you alive. Pop this when surrounded or face to face with a Boss to prevent massive damage. It also uses Rage and grants Willpower, helping you to cast Anomaly more frequently when you aren’t completely surrounded or attacking.

Figuring out how to align your Gate of Fates is one of, if not the hardest part of making a Build in Wolcen, and generally takes a respec or two before gotten right. In this section, I want to show you how I’ve set this up for maximum performance. 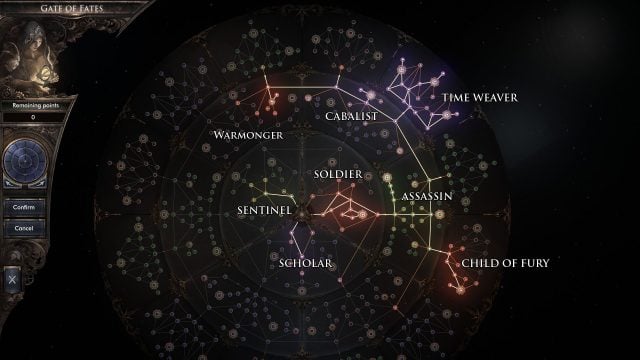 Soldier is first and you want to take Heavy Blows and Zealous Might for Critical Damage and just damage in general. Make sure to grab The Wild Card and the 3 nodes next to it for further increased Critical Chance. And don’t forget to grab Quick Draw for the Cooldown Reduction.

Once in Assassin you’ll want to head for Merciless Lethality immediately. This will give you a whopping +100% Critical Damage in exchange for -30% Damage on non-crits. That might seem like an extreme trade off, but remember -30% is additive and Critical Damage is multiplicative. This is a huge damage boost on Critical Hits immediately. Then you’ll continue your way straight through the middle of Assassin getting over to Child of Fury as quickly as possible.

Child of Fury contains probably the most important passive for this Build in the Skill: Furious Appetite. This one ability changes the whole dynamic of the Build, allowing you to regain Rage instead of Willpower, allowing you to use your Melee Skills more often. This pushes you immediately to the melee side of a hybrid Build, which is right where we want to be. Up until this point you’ll likely have difficulty dumping your Willpower. Get there ASAP, even taking passives that increase Fire Damage just to make it quickly.

Once that passive has been taken you’re going to bounce through the other side of Assassin to Cabalist just to pick up Grievous Afflictions. This will allow you to place more Ailments than one with each Skill, which works well since you’ll likely have multiple damage types for each. This is all you need here, though you can take Tormentor if you want.

After Cabalist comes Time Weaver which contains some great passives in Wither In Dreams, which increases Aether Damage and you can take several times. Additionally, Which Time Cannot Heal is contained here and that will drastically increase your damage on enemies that have Stasis. Dire Juncture is a great tanking Skill and works well when you’ll be taking big hits. Captured Velocity is just nice to have, and will trigger often so there’s no reason not to grab it.

Last, we head over through Cabalist to Warmonger. You immediately want to go for Bestial Frenzy to gain increased damage for each nearby enemy, grab take Take All Challengers and Battlefield Predator to make it even better. There are tons of great passives in this tree and you can spend 15+ points here easily. Feast For The Crows is great for survival, and so are Tearer of Flesh and Blood Offering.

In this section we’ll be covering the type of equipment that you want for the Stasis Knight Build. You’ll need a one-handed Weapon, and a Catalyst. You need the Catalyst to use Anomaly, so this isn’t optional. You want to look for Weapons and Catalysts that have + flat amounts of Aether Damage on them if possible. If not, any sort of Occult Damage is ok, and these include Sacred and Shadow Damage. You’ll want it both on attack and spell cast if possible. 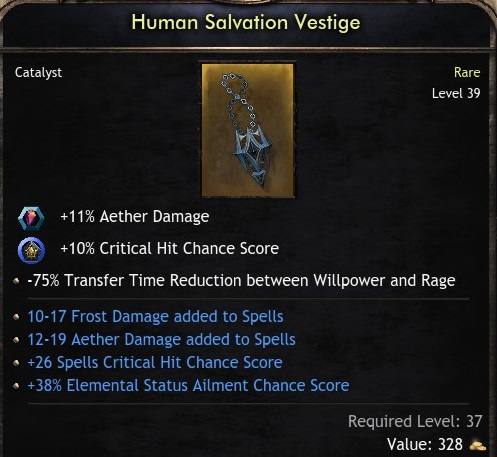 Make sure that your Weapon has 3 Offensive Slots, ideally a I, II and III. This will allow you to add Aether Damage to your Weapon, Spells and add Stasis Duration if you use Ambers in the slots. Make sure you head over to Zanafer Stark and reroll slots until you have a good combination. 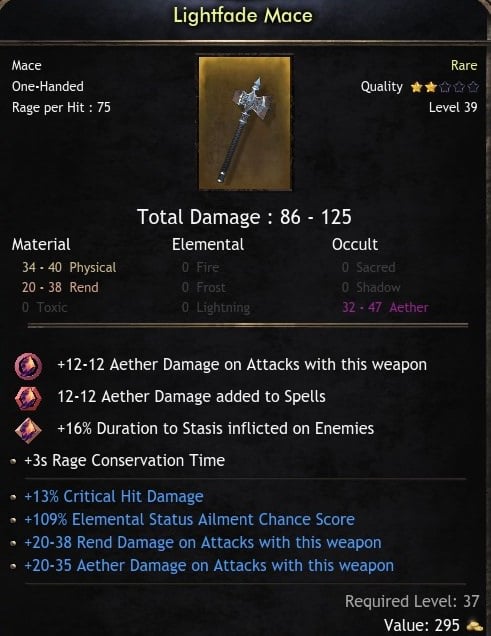 On your Armor and Accessories you’ll primarily be concerned with flat damage increases to Aether Damage, Cooldown Reduction, Occult Damage, Critical Damage and Critical Chance. You want to select Armor types that contain high amounts of Resistance so that you mitigate damage taken to you, and as you get further into the game you’ll need to start prioritizing these values a bit over the above stats if you find you are dying. You’ll also want Support II Sockets for increased Aether Damage, and Defensive I for increased Health Regeneration.

Focus on Occult Damage early on in the game when it’s harder to find good items that have specifically Aether Damage. You will not gain the passives that grant +% Aether Damage until much later in the game anyway, so any type of Occult will work fine for most of the game.

Make sure to unsocket gems from your old Weapons and Armor before selling them. You’ll want the Ambers and Amethysts for Aether Damage and increased Critical Damage. These are not always easy to find so there is no point in wasting them. Better to lose a bit of gold then have to farm an hour to get one. 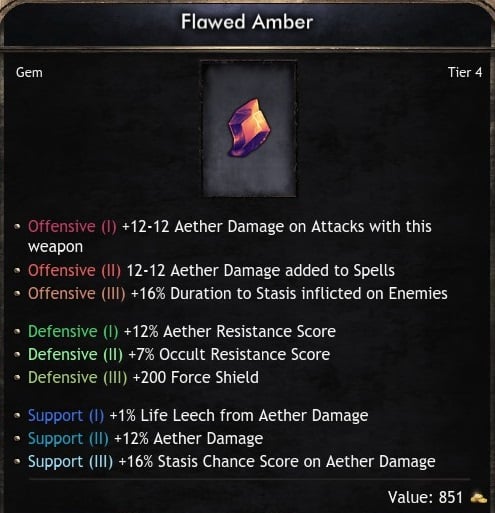 Lastly, make sure to keep items that have +Flat Values of Damage, even if they are Elemental Damage types because they will still add damage to your Weapon or Anomaly. You will have some +Fire Damage % from  the Indignation passive in Child of Fury, so that is the next best type of damage you should look for. Regardless though, it’s generally best to use the item that has the highest Flat Damage increase, regardless of type.

Be sure to check out our other Wolcen Lords of Mayhem Guides, and stay tuned for more Builds, including Beginner and End Game Builds, such as the Wolcen Mage Build: Oracle of Flames or the Ranger White Arrow Build.