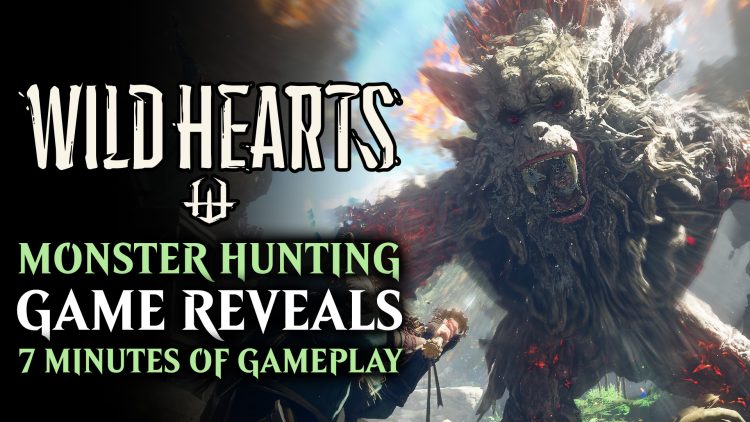 Wild Hearts gets an official 7-minute gameplay trailer. It shows off its monster slaying, gadget construction, and multiplayer aspects of the title.

EA Games and Koei Tecmo’s official entry into the Monster Hunter genre is titled Wild Hearts. To date, no other company (except Pheonix Labs’ Dauntless) has attempted to dethrone the king of hunting monsters. This can potentially change next year, on February 17, 2023 as Wild Hearts will get released.

In anticipation, the official YouTube channel premiered 7 full minutes of official gameplay. While Wild Hearts is definitely rivalling Monster Hunter Rise, it does still attempt to add some more spice into the mix.

Wild Hearts takes place in the fictitious land called Azuma, which is heavily inspired by ancient feudal Japan. The surrounding areas of Azuma are home to gigantic, and wonderful beasts called the Kemono. They have been quite literally one with nature, and as such have begun to literally fuse with the local wildlife. 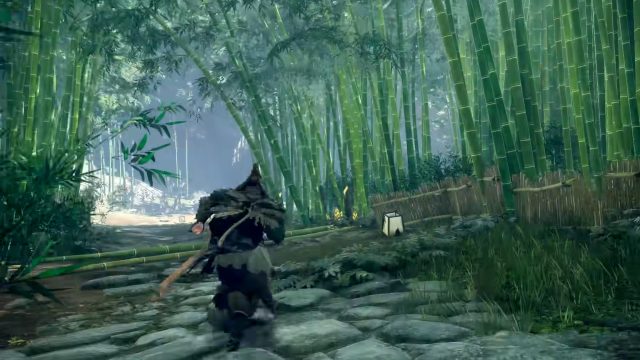 This has proven quite dangerous, as the once-peaceful Kemono have started becoming agitated and wreaking havoc along the other citizens.

The player character (and up to two of their friends) have become bearers of ancient powers and technology that allows them to quickly construct various machinations to aid them in combat. It is thus entrusted to them to save the kingdom.

A lone player stalks his prey in Wild Hearts’ official gameplay reveal. He intends to take down Kingtusk, a gargantuan boar that has fused itself with moss, branches, and other jungle plants. It starts out slow, with the player initially roaming a picturesque horizon that reminds us quite fondly of things like Ghost of Tsushima. 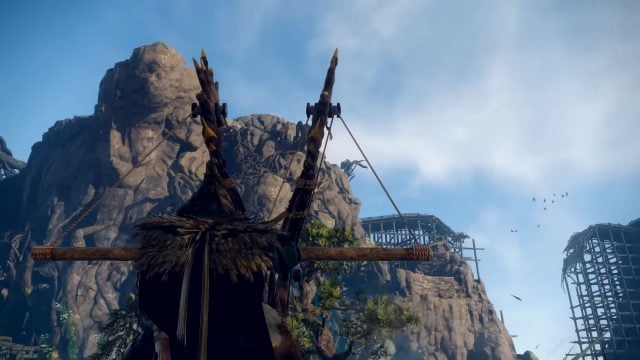 Need a Way Up the Mountain. Just Make a Zipline

Kingtusk apparently resides on the mountain just beyond our reach. No problem for our intrepid hunter, though! He is able to quickly assemble a ballista that shoots out roped bolts that form a usable zipline. The hunter also makes use of small springboards that can propel himself up into areas that are just a bit out of reach. 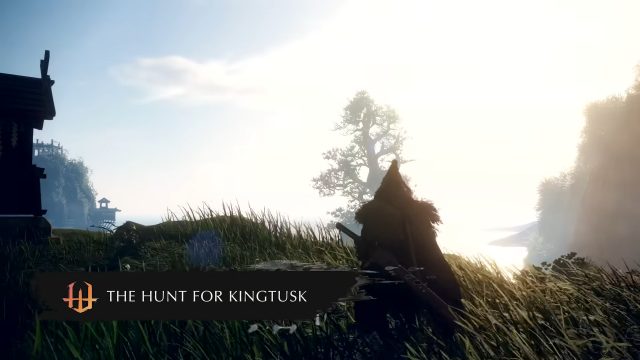 The Hunt is On

Our hunter even uses these gizmos to launch a surprise leaping attack onto the peaceful Kemono. Thus, the fight begins. It is your usual monster-slaying affair that consists of the player dodging charges and trading blows, but it ultimately ends in failure. 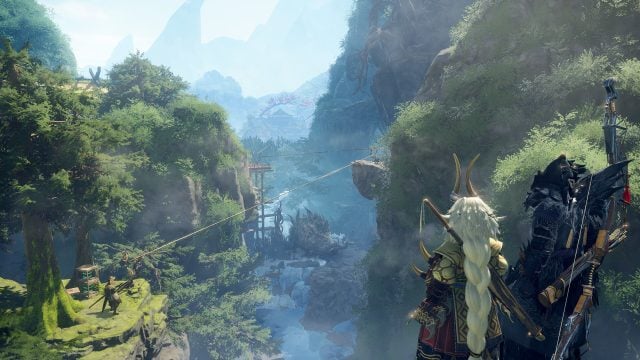 Do You Wanna Build a Zipline

Until Player 2 joins into the fun, that is. Eventually, the pair catch up to Kingtusk by following gusts of wind. Just like in Ghost of Tsushima, the wind is a useful tool that can help point players right into their targets, or give attention to various points of interest. Just like the fireflies in Monster Hunter World.

The Beast is Cornered

Kingtusk is finally backed into a corner, but he is definitely not out of the fight. Even for the pair of hunters, he proves to be a challenge for their simple martial prowess. Good thing Player 2 is quite agile and makes use of an Umbrella weapon while the first hunter makes trusty use of his sword that can be doubled as a whip. 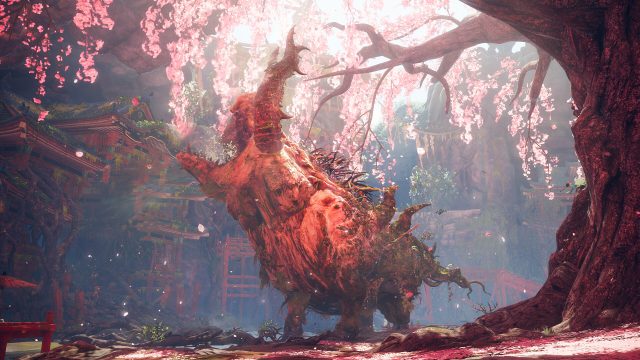 Even better is the fact that both of the hunters can quickly assemble various machines to help them out in combat. These machines are so fast to build that they seemingly appear out of thin air. Aside from the earlier springboards, there are a ton of other creations. 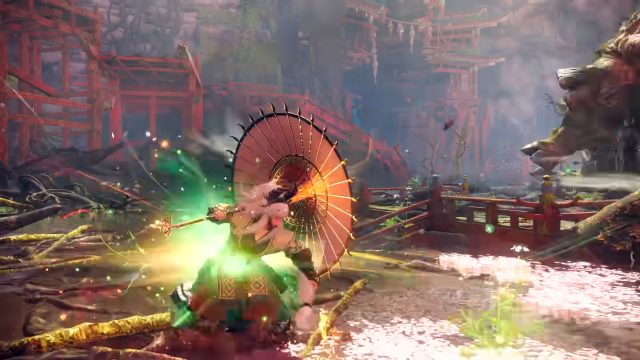 One heavily featured invention was a small propellor that allowed its user to float mid-air for a limited duration. Players can also quickly erect a tower that they can dash from. They were even able to create a trebuchet-like machine that has a comically oversized boxing glove attached to the end of it. This was then used to hilariously pummel the Kemono into submission. 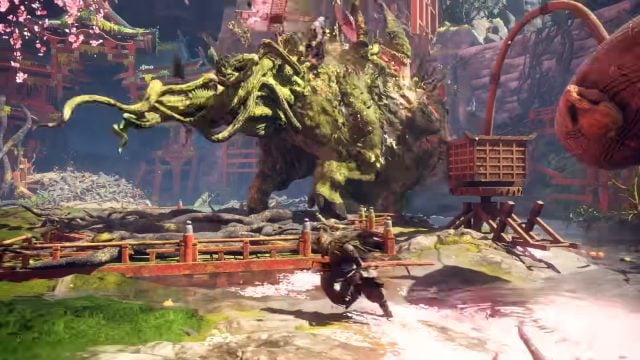 When in Doubt, Punch it Out

Wall can even be set up in a pinch to block the angry, charging Kingtusk. And when in doubt, the hunters even crafted numerous flash grenades and a bomb that was used to finish off the huge beast.

Tale of the Tape

Wild Hearts will be taking place in Azuma and will have four major hunting grounds. These sprawling areas will all have their own theme, patterned against the four major seasons: spring, summer, autumn, and winter. The game will feature up to 3 player co-op. More surprisingly, the title will also feature crossplay between the various platforms. 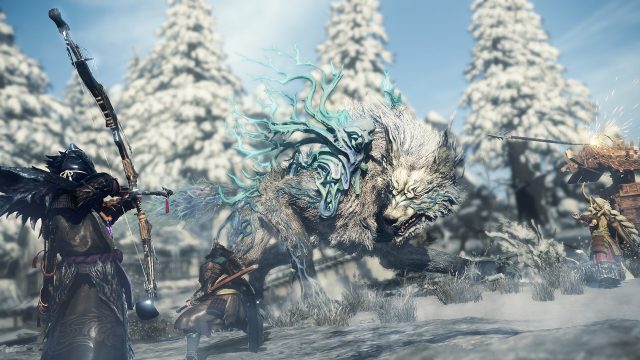 EA Originals have usually been reserved for Indie or AA titles such as It Takes Two, Unravel, or A Way Out. Wild Hearts will be the first game to be published under this label. As quoted by Stuart Lang, vice president of Electronic Arts, “EA Originals is a label for those who dare to explore. It’s a home for studio partners – like Omega Force – forging new ways to play from bold creative visions, and for players who love to discover untold stories and unseen worlds.”

The Wildest of Hearts

Wild Hearts will be released quite soon on February 17th 2023. Only about four months until players can have an alternative game to Monster Hunter and Dauntless.

For more news, check out Cyberpunk 2077 is Getting A Sequel and New Witcher Games Planned and Dead Space Gameplay Trailer Shows Combat and More.