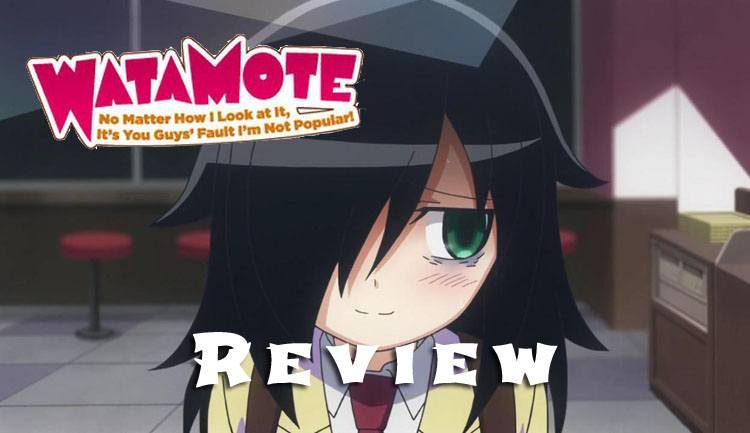 L me start by saying that I was forced, coerced or otherwise blackmailed into watching this Anime by a certain female who shall remain nameless.  The ways in which a woman can “persuade” you to watch something (or do something for that matter) are endless it would seem, but I digress and that is article worthy in itself for another time. For now let’s stick to Watamote.

Not being very familiar with Anime until rather recently, Watamote was the second Anime that I have ever really sat down and watched an episode from start to finish (the other being Attack on Titan). It’s a show about your not so untypical teenage girl trying to be popular in high school. Sounds ever so unique and interesting right? Well to my surprise it was extremely funny and quite entertaining. It’s actually quite amazing the way Nico Tanigawa draws emotion, because it is captured so perfectly and in a very “Japanese” manner. I say Japanese because in such a polite society, people go out of their way to make sure things are taken as a joke, and Watamote is so over the top in this fashion that you can’t help but burst out in laughter…

Simply put, this is the entire reason I watch this Anime.  The main character, Tomoko, is just a walking Manga train wreck (and I mean that in a good way).  She obsesses about every minute detail of her life to the extreme. The Anime is actually a parody on the life of a teenage girl, blowing every last thing out of proportion in such a way that you stare at the screen blankly and think “Oh my fucking god!”. And yet somehow you just can’t look away and find yourself in fits of laughter. Imagine watching your little sister, when you were a kid, on coke, getting ready for her first day of high school or her first date (yes i said coke, not a typo). Also, imagine she can pull off really amazing facial expressions as if she was Jim Carrey in The Mask.  This will give you some idea of what watching the show is like.

The story is pretty typical and somewhat similar to other Anime from what I understand. Girl just finishes Middle School, gets ready for High School, and wants to be popular (expects to be even). Tomoko constantly obsesses and plots ways to become popular down to the last detail; including what she will wear, how she will act (sometimes even taking on different personas), and how she will get people to notice her.  The problem is, she is a social reject, aka, a spaz (I know, that takes you way back). Each episode essentially follows her latest attempt at becoming accepted and watching it fail (she’s the Manga version of Wile E Coyote). You’d be amazed, just when you think, “How can it get any worse?”…it does…and it’s hilariously amazing.

This is actually one of the stronger points of the show. Something that Manga and Anime seem to excel at, in my limited experience, is capturing emotion and Watamote does this perfectly.  Because the show is based on overemphasizing and exaggerating every last detail, this is the only art style that can truly depict Tomoko’s feelings in such a way that it’s funny.  It’s not funny to see somebody upset, or so one would think right? WRONG!  Poor Tomoko (laughs hard).  I don’t have a lot of Anime to compare art against, sadly, but I will say this: Tanigawa manages to make a teenage girl going to High School worth watching…and it isn’t because the story is amazing.

While this wouldn’t have been the show that I picked to watch, it’s one that I would recommend to anyone who simply likes comedy. It’s a show you can just plop down on your couch and watch an episode and laugh and feel better about your life while you eat a meal or something (I do this all the time). While there are many moments that are just so fucking awkward it’s hard to watch, you end up laughing about them so hard eventually. Often I would find myself recalling a scene and laughing hours later, which is something few shows (if any) have managed to make me do, no matter how good. Episodes are 20 minutes long, so even if you are still skeptical that this show isn’t manly enough for you (and it isn’t, trust me), you don’t have much to lose by seeing if you like it. Just don’t tell anyone you watch it or write a blog review about it…

7.8
Summary: Tomoko is that inner voice in all of us that we all have and try to pretend we don't have. Being able to laugh about her failures might just provide some relief to those of us who are stressed out by similar anxieties and pressures. An easy comedy to watch while you have a meal with family or by yourself. Highly recommended.
Humor (9.1)
Story (6)
Graphic Art (8.5)