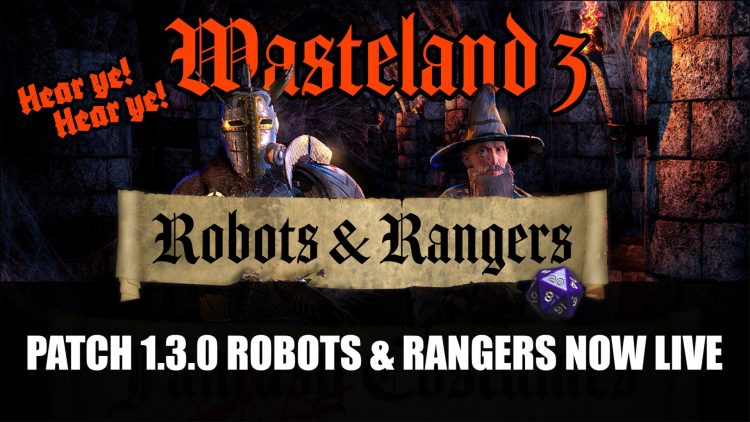 The latest patch for Wasteland 3 has now gone live adding some new features to the game including a new Tourist mode and more.

Wasteland 3 has gotten a new patch, update 1.3.0. titled Robots & Rangers. Not only does it add new free fantasy costumes the Handmade Wizard and Wasteland Knight, but also adds a new mode, new cosmetics, some gameplay changes, and more.

The major new additions include a new mode called Tourist, which sets to be easier than Rookie, letting you experience the story of Wasteland 3. It lets the combat take a backseat so you can enjoy the story unfold. The patch also brings new cosmetics in the form of new hair, beards and pants for character creation.

Intelligence now grants +1 skill points for every point of Intelligence spent, which is up from +1 every other point. The achievements Book Learnin’ and Answering Machine are now achievable. There is also the option to bind more actions to keyboard and mouse, also unmapping any conflicting double-bound keys.

Rangers ? ! Patch 1.3.0 is now live across all platforms! Note that it may take up to an hour to appear across console regions ?.

Gameplay fixes and improvements include rangers now being visible after transitioning to a new scene, Creepy Dolls have creepy lore added in the Archive Screen, fixed bugs for companions prevented from joining the squad under certain conditions and much more. UI & Controls have also had a polishing, making for a smoother experience.

For more news be sure to check out next Elder Scrolls Online: Blackwood Unveiled As Next Chapter; Gates Of Oblivion Year Long Adventure and BioMutant Launches On May 25th.