In this Wasteland 3 Builds Guide I’m going to be showing you my Sneaky Sniper Build which uses Sniper Rifles and Pistols (much like a Sniper in X-COM would) to pop heads with ease. Wasteland 3 can be extremely overwhelming for new players, and can cause confusion for veterans alike. In this Build Guide I’ll explain just how to make this Build, including what Weapons to use, what Skills to take and which Perks to pick up. If you’ve been looking for a Sniper Build then check this one out!. More Guides on our Wasteland 3 Guides section, including the explosive Recon Rocketeer Build.

The Sneaky Sniper uses a combination of Snipers, Pistols and Sneaky Shit in order to pick off enemies at range, as well as deal some incredible damage if they get close. Because we max out Sneaky Shit and take the Lights Out Perk, attacks on unsuspecting targets will deal an additional 300% damage resulting in a devastating attack, especially if it Critically Hits, which it often does. If you’re not opening combat with this character picking off the toughest enemy on the opposing force, then you are doing something wrong! 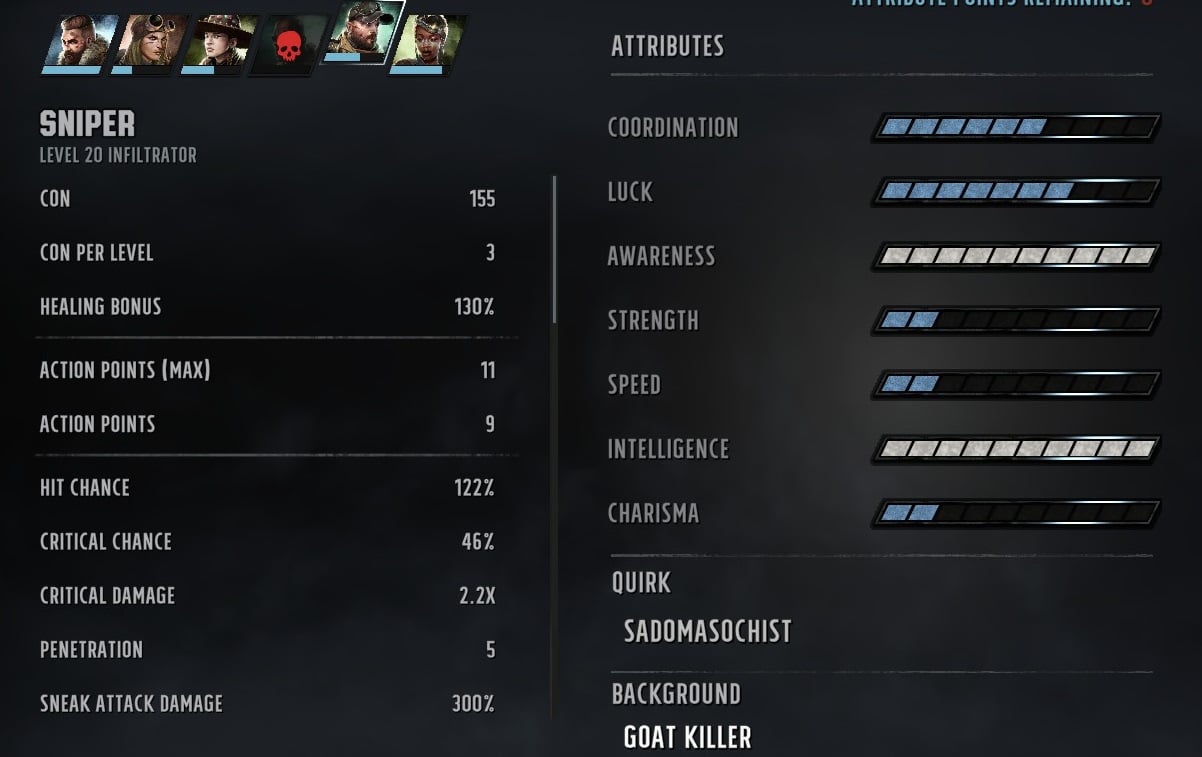 During Character Creation you’re going to want to choose the Goat Killer Background in order to increase your Critical Hit Chance by 5%. Snipers hit like a truck, and when they Crit they hit much much harder so you want to boost your Critical Hit Chance as high as you can. If you don’t want to take this one then I suggest taking any Background that increases your damage in some way, such as Raider Hater. 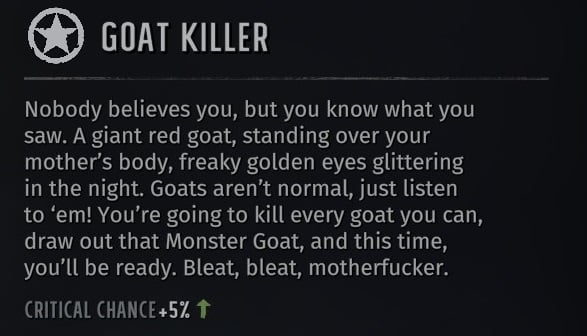 When making your character you want to make sure that you have 9 Action Points, which means you’ll need to place 4 Points into Coordination. This will allow you to shoot once with your Sniper Rifle and then switch to your Pistol and fire, or go into Ambush with it. This leaves you 3 Points to spend between Intelligence and and Awareness. I tend to favor Intelligence over Awareness because Critical Damage often one shots a target, and it’s better to out right kill something then just hit a bit harder and it remain standing. However, you can distribute the points in any manner you wish between these two Attributes.

Once these two Attributes have been maxed (Intelligence and Awareness), you’ll want to start pumping Luck for increased Crit Chance and Mega Crit Chance. This will further boost you DPS because when buffed you should have somewhere around 80% Crit Chance.

For Quirk I like to take Sadomasochist for increased damage by 33% in exchange for taking 33% increased damage. As a Sniper you tend to stay as far away from enemies as possible, so you should be taking damage much less often than your other party members, so this is not a bad trade off. Death Wish is also not a bad choice if you want to be able to fire 2 Sniper Rifle shots each turn, but the choice here is up to you. If you don’t want to be quite so “glass cannon” I suggest taking the Medical Marvel Quirk to give you some more Health, because you won’t be investing at all in Strength.

From this point onward you’ll need to take Sniper Rifles to 5 Points and then Small Arms to 7 Points. After that you’ll max out Sniper Rifles, and then start placing points into Sneaky Shit until it’s maxed out in order to increase your damage when not engaged in combat.

The Sneaky Sniper uses both Sniper Rifles and Pistols, so you’ll want to make sure you have one of each type slotted. Prioritize Sniper Rifles that have the highest damage, but pay attention to the type of ammo they use. .50 Caliber Sniper Rifle Ammo is expensive and not always easy to find, so I recommend using a .30-06 Sniper Rifle for the standard encounters and saving your .50 Cal for tougher fights.

You also want a pistol that does the highest damage per shot you can get. It doesn’t matter which one it is, as long as it’s damage is good, but ones with Risky Shot are preferred once your Hit Chance is improved and you have Marked Target. Keep in mind that both Sniper Rifles and Pistols with smaller Magazines will need to be reloaded more and will gain the most benefit from the Draw! Perk. 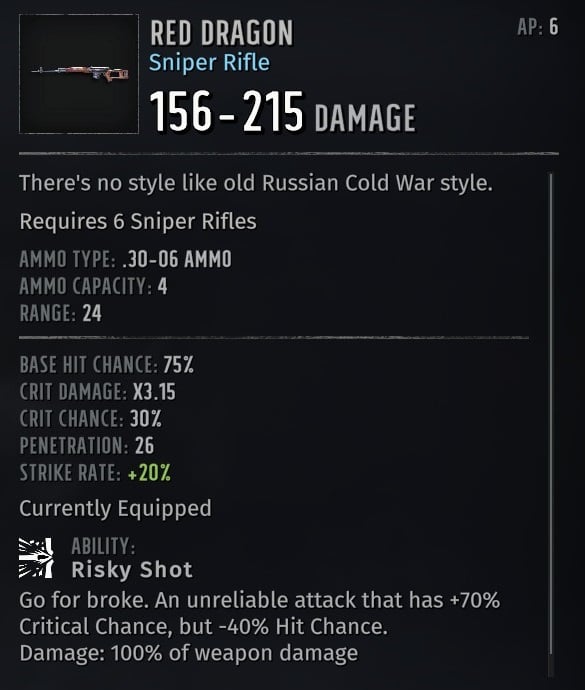 When it comes to Armor you want to wear the most protection you can get without sacrificing anything. There are some really good helmets that have +% Critical Hit Chance on them, and you’ll want to be on the look out for these and slot them as soon as you get them. Otherwise this doesn’t matter a whole lot, and you won’t even be able to equip Armor if you chose Death Wish for your Quirk.

In this section we’ll take a look at which Perks to take for the Sneaky Sniper Build, and what order you should take them in. Which Perks you can take are regulated by how many Points you have in each Skill, so this should also give you a road map of where to place Skill Points so that you can obtain these in the proper order.

Mark Target – This Perk allows your entire team to hit a target more easily and increases their damage with Precision Strikes against them to boot. This is great against difficult to Hit enemies, but what it’s really great for is allowing you to use Trick Shot and Risky Shot more easily and effectively.

ealthy – This Perk increases your Health by 35, which is going to be a lot for this character since you don’t have any points into Strength to further boost it. This will help keep you alive, so that you can keep on sniping.

asterful Precision – This Perk will increase your chances of inflicting Critical Strike effects when using Precision Strike. This not only boosts your damage in many cases, but it can have a devastating impact if you blow up a flamer’s propane tank for instance.

Trick Shot – This Perk fills your Precision Strike meter and refunds 3 of its 4 AP cost, but it reduces your Hit Chance by 50%. To offset this you’ll want to Mark Target whatever you plan to hit with it first, reducing this to 35%. Additionally, if you land the shot on a Marked Target you will deal 100% more damage to it, which has a nice synergy here. This will get easier and easier to use as you place Skill Points into Small Arms.

raw! – This Perk allows you to fire a free shot after reloading an empty Magazine. Snipers usually only hold 4 or 5 rounds, and this does apply to them as well, which can give you an extra attack every 4th or 5th turn (even more often if you took the Death Wish Quirk). The smaller the Magazine, the faster you’ll get a free attack.

oncentration – This Perks helps boost your Hit Chance by 10%, which isn’t a ton. However, it does make using Risky Shot even easier, further reducing the likelihood that it will miss, so it’s worth picking up.

hain Ambush – This Perk allows you to Ambush again every time you kill an enemy with a Sniper Rifle while Ambushing. This can absolutely destroy an overly aggressive enemy force, so you it’s a must take Perk.

ights Out – This Perk boosts your Sneak Attack damage by 200%, which will be a total of 300% by the time you take this Perk. This allows you to all but one shot any enemy as long as you hit them before they engage in combat. Aim for the toughest enemy and take them out before the fight even begins.

Make sure that you are in high cover as much as you can be with this Build because when you get hit, you’ll get hit hard. Cover will protect you from damage, but Low Cover isn’t as good. Stay back and find yourself a great place that you don’t plan on moving from before you open fire. You won’t regret it.

Use Cigarettes to further boost your Critical Hit Chance by 10% while in combat. Pop them just before you engage for best results, and don’t worry too much about the penalty you’ll have afterwards because a) it only reduces your Hit Chance a tiny bit, and b) you can always smoke another Cigarette to reapply the effect. 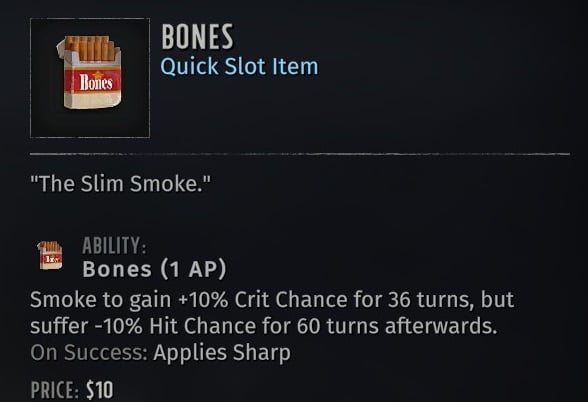 Ambush increases your Hit Chance by 5% for each Action Point you use to enable it, which is particularly helpful early on in the game when you need help hitting targets. Don’t be afraid to use Ambush if you don’t think you’ll hit your target, because you just might if they advance on their turn. Additionally, if they leave cover to move then you’ll have an even greater chance to hit them.

Lastly, make sure to keep an eye on your Ammo count because there is nothing worse than going into combat and realizing you have no Ammo for your chosen Weapon. Remember what Ammo your guns use, and make sure you have plenty. Especially if other party members are using the same Ammo!