In this Wasteland 3 Builds Guide I’m going to be showing you my Shotgun Sergeant Build which uses Shotguns to shred its enemies by the dozen, all while buffing its teammates in the process. Wasteland 3 can be extremely overwhelming for new players, and can cause confusion for veterans alike. In this Build Guide I’ll explain just how to make this Build, including what Weapons to use, what Skills to take and which Perks to pick up. If you’ve been looking for a Leadership Build then check this one out! More Guides on our Wasteland 3 Guides section, including the Sneaky Sniper Build.

The Shotgun Sergeant Build uses a combination of Shotguns, Leadership, Mechanics and Survival to pump out tons of damage, thereby buffing its party members. By having lots of points into Leadership, the Shotgun Sergeant not only increases its party members’ Hit Chance, but also Critical Chance and Damage when it kills multiple enemies or boss enemies. When combined with a Shotgun that has such a wide arc of attack, and extremely high damage, this is not hard to do at all. Especially when Shotguns usually only cost 3 AP maximum per shot. 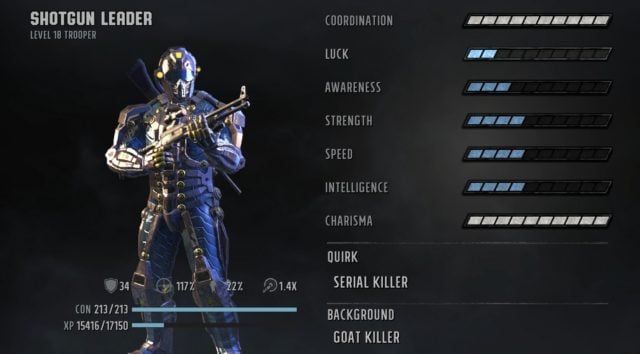 The Shotgun Sergeant needs a large investment into Charisma, not only to increase its Leadership range, but also to increase Strike build up. The increase in Strike build up that you gain from high Charisma is vital to the success of this Build because the special attack that Shotguns do is absolutely devastating. This is the sole reason I chose Shotguns for this Build instead of Pistols, which passively boost Strike build up even more. It’s best to max this one out eventually.

This Build also needs a ton of Coordination in order to get off several shots per turn, ensuring it kills something, so that party members can take advantage of the Leadership buffs. I like to max this one out for best results.

Besides Coordination and Charisma, you’ll want some Awareness, some Intelligence and some Strength in order to further boost damage and survive ability. I like to drop at least 2 points into each of these. 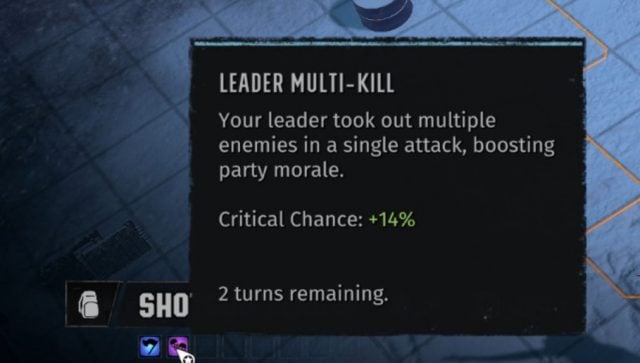 When making this Build from scratch you should look to prioritize Coordination first in order to gain Action Points that will help you wrack up kills. Once you are at max, or near max, you can start placing some points into Charisma to extend your Leadership range and boost Strike build up. Once you’ve placed several points into Charisma start to add points to Strength, Intelligence and Awareness until they are all boosted at least 2 points. Then max out Charisma. Further points should go into any of the other 3 Attributes.

I use the Serial Killer Quirk for this Build because you should be getting a kill every single round with this setup, so you should get an AP boost from this every turn. However, Two-Pump Chump is not a bad choice either, because this will give you an extra 2 AP on your first two turns. You want to get kills quickly with this Build because that way your teammates gain your Leadership benefits as quickly as possible once in combat.

The Skills you want for this Build are Small Arms, Leadership, Mechanics, Survival and First Aid. You only need to take Small Arms to 8 in order to gain the Devastation Perk, and you only need to get Leadership to 5 to get the Demoralize Perk. However, you’ll likely want to max Leadership out eventually. Survival needs to be taken to 6 in order to get the Big Game Hunter Perk, and Mechanics you just wan to dump points into as they come. All extra points should be placed into First Aid, because you can revive people with extra health from Leadership, so there is nice synergy here.

Start by placing points into Small Arms and Leadership, taking them up together, prioritizing Small Arms. Dump extra points you have that can’t go into either of these into Mechanics and Survival. Then finish taking Small Arms up to 8, continuing to level Leadership, Mechanics and Survival after this has been accomplished. Any extra points go into First Aid to boost healing and revival efficacy. Note that you do not need to max out any of these Skills so you can spread around your Skill Points a lot more.

I like to use two Shotguns for this Build, but you can use a Pistol and a Shotgun early on if you wish. The reason for two Shotguns is that you can mod one to have extra range, but a narrow cone. And you can mod the other to have a larger firing arc, so that you have the right Shotgun for any situation. Sometimes you need range, and sometimes you need spread. Swap to the one that is appropriate and use that.

For Armor you’ll want the Spectrum Assault Armor Set as this gives you +12% Critical Chance, +10% Initiative, +0.5 Detection Time, and +0.3 Combat Speed. You’ll also want the Anabolic Injector to gain an additional Action Point when you can get it. If you don’t have these yet, look for things that boost Combat Speed, Critical Chance or Hit Chance. 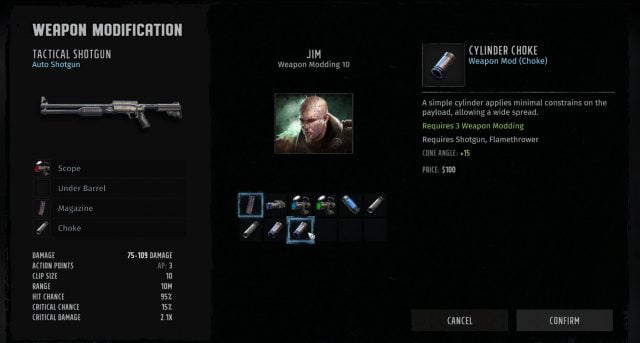 In this section we’ll take a look at which Perks to take for the Shotgun Sergeant Build, and what order you should take them in. Which Perks you can take are regulated by how many Points you have in each Skill, so this should also give you a road map of where to place Skill Points so that you can obtain these in the proper order.

Clear Cover – This Perk increases the damage to cover you deal with Shotguns by 100%. This can usually wipe out all cover in your firing arc in one blast, making subsequent shots much more accurate for you and other teammates.

Rally – This Perk can give every person in your party +2 AP for the cost of 4 of your AP. Early on in the game this will help boost your team, before your Leadership Skill is high. Once you’ve invested in Leadership a ways, you might be better off killing things to buff your teammates, however.

raw! – This Perk allows you to get a free shot if you reload an empty magazine. This will be much more useful early on in the game, but it should still give you at least 1 free shot per encounter.

Structural Weakness – This Perk will increase your damage against Robots and Vehicles by 20%, on top of the amount you gain from each point invested in Mechanics, so its worth taking.

Devastation – This is the best Perk in this Build, increasing your damage by 25% for each enemy hit with the same Shotgun round. If you hit 4 enemies, that’s +100% Damage! Once you get this you’ll be a killing machine.

Big Game Hunter – This Perk will further boost your damage against Mutants and Animals by 20%, and much like Structural Weakness, that is on top of the damage per point spent into Survival.

Remember that your party gains the benefits of Leadership for a limited time when you kill multiple enemies or a “boss” enemy. Learn to recognize which enemies are considered bosses, and be on the lookout for multiple kill opportunities. Be sure to let a party member go before you if needed to soften up enemies, making sure that you get the kill.

Always use your special Strike Attack whenever it is available, because it can clear a screen with one blast. Make sure to move into a position where you can hit the most enemies possible when using it, if you can. Additionally, by using it the second it’s available you’ll begin filling your Strike Meter again with your next attack, often making it possible to get 2 or more Strike attacks in one encounter.

Lastly, DO NOT forget to mod both Shotguns with Chokes. This will allow you to extend the range of one Shotgun in exchange for a reduced firing arc, and will allow you to extend the arc of the other. This allows for precise kills or aoe shots depending on the situation you are in. This is very important because you don’t want to move any more than you have to, and this makes it so that you don’t have to.