In this Wasteland 3 Builds Guide I’m going to be showing you my Recon Rocketeer Build which uses Rockets and Pistols to blow enemies to smithereens. Wasteland 3 can be extremely overwhelming for new players, and can cause confusion for veterans alike. In this Build Guide I’ll explain just how to make this Build, including what Weapons to use, what Skills to take and which Perks to pick up. If you’ve been looking for a Heavy Ordinance Build then check this one out! More Guides on our Wasteland 3 Guides section, including the explosive Sneaky Sniper Build.

The Recon Rocketeer is aptly named because it not only uses Rockets to demolish anything its path, but also uses a bit of stealth to get into a good position from which to execute the most devastating attack possible. If the first Rocket doesn’t kill your target, no worries because you can just reload and fire again thanks to the Draw! Perk. However, you want to aim to kill the most enemies or hardest to kill enemies with the first shot if you can, because it will gain bonus damage from Sneaky Shit. 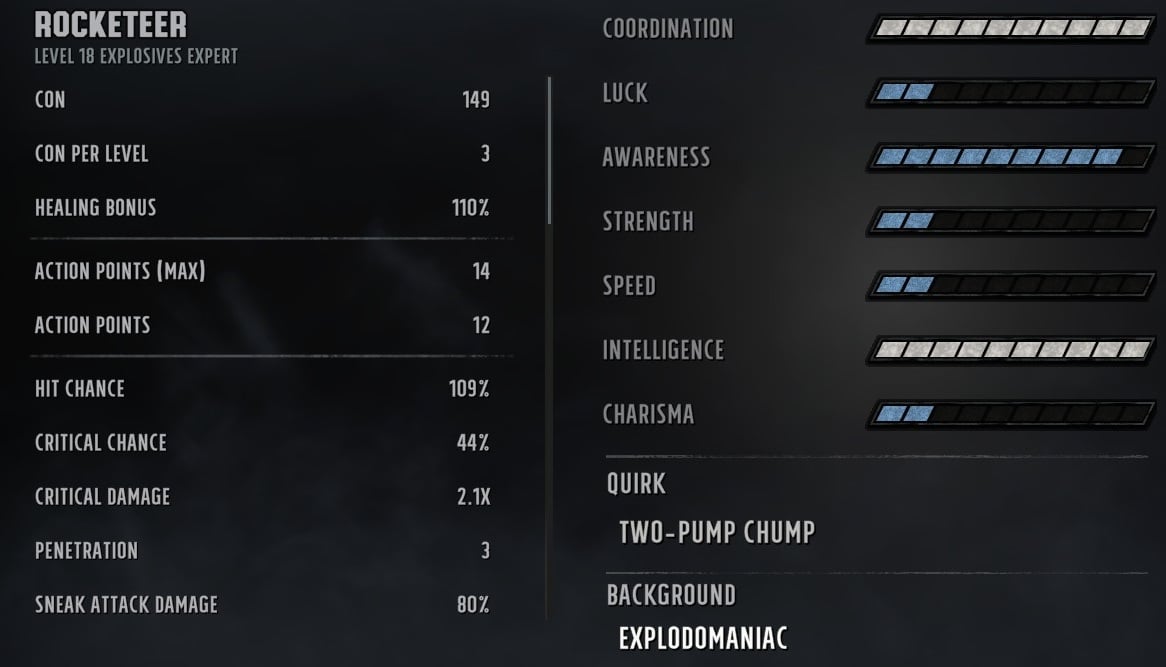 During Character Creation you’re going to choose the Explodomanic Background in order to gain 15% increased damage with Explosives, which is not a small amount. Every Rocket you fire will benefit from this boost, as well as any Grenades you use, so it’s a no brainer for a Rocket-based Build. 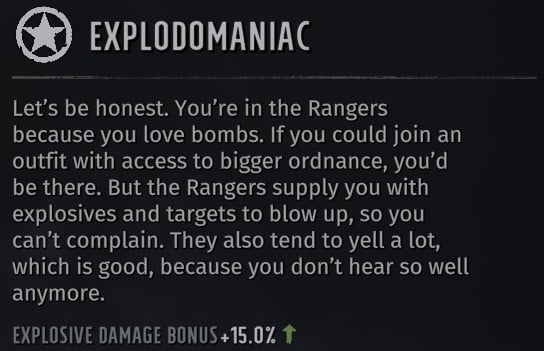 You need to max out Coordination as quickly as you can in order to fire off the most Rockets you can each turn, or most Pistol shots if you don’t need tons of Rockets for the encounter you are facing. You can get up to a total of 14 starting Action Points with the Anabolic Injector later in the game, allowing you to fire 4 Pistol shots or 4 Rockets per round. That is a great amount of DPS to say the least.

Once Coordination is maxed out you’ll want to boost Intelligence for increased Critical Chance and Critical Damage. Once you gain the High Impact Perk your direct hits will automatically Crit so you want to make sure you have the highest Critical Multiplier you can get. This really helps to take down the toughest enemies there are, especially on harder difficulties.

Once Intelligence is maxed out you’ll aim to max out Awareness to increase the damage from your Pistol. I’m reasonably certain Awareness will also boost damage from Rockets, but it certainly affects Pistols, and you won’t regret taking it either way. It also helps to raise your Perception when you are wandering through enemies, making you aware of traps you might trigger.

By far the best Quirk I’ve found for this Build is Two-Pump Chump. This Quirk essentially gives you an extra Reload for the first two rounds, allowing you to fire another Rocket. The penalty of -2 AP is offset by the large investment into Coordination, and the -15% Hit Chance will only apply to your Pistol shots. And even this can be offset by maxing Small Arms and Awareness. 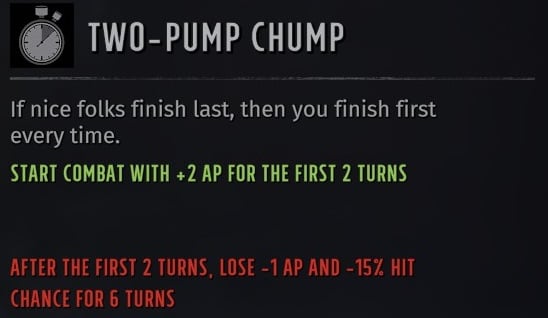 You want to place 1 Point into Explosives, and 3 Points into Small Arms during Character Creation. From here you’ll want to rush Small Arms as quickly as you can to 7 in order to pick up the Draw! Perk. This one Perk alone makes this Build an absolute powerhouse, and the sooner you get there the sooner you can enjoy its benefits. Afterwards you should max out Explosives to increase your Rocket damage and to get some other good Perks. Last you should max out Sneaky Shit in order to get +300% Damage when you fire before combat begins.

For this Build you’ll want both a Rocket Launcher and a Pistol of some kind. You won’t need Rockets every time you face enemies, so use your Pistol on these occasions to help deal damage and conserve Rockets for when you need them most. You won’t deal a ton of damage with your Pistol, but you’ll have good Hit Chance and lots of AP, so you can fire many shots. Aim for the Pistol that deals the most damage for best results. 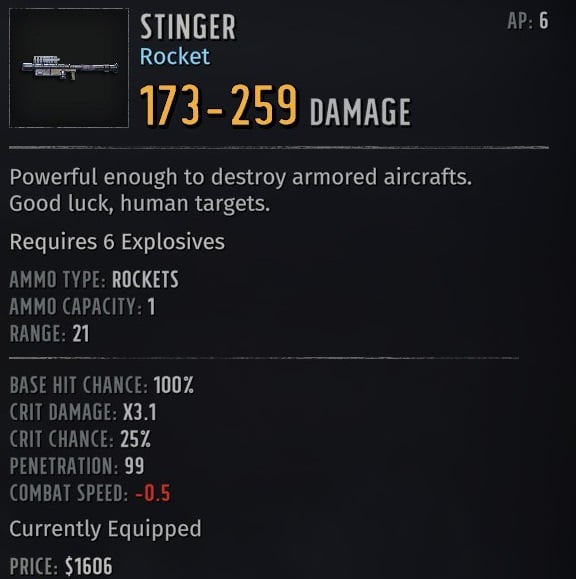 For Armor you’ll want the Spectrum Assault Armor Set as this gives you +12% Critical Chance, +10% Initiative, +0.5 Detection Time, and +0.3 Combat Speed. You’ll also want the Anabolic Injector to gain an additional Action Point when you can get it. If you don’t have these yet, look for things that boost Critical Chance, Detection Time or Explosive Damage.

In this section we’ll take a look at which Perks to take for the Recon Rocketeer Build, and what order you should take them in. Which Perks you can take are regulated by how many Points you have in each Skill, so this should also give you a road map of where to place Skill Points so that you can obtain these in the proper order.

raw! – This Perk allows you to fire a free shot after reloading an empty Magazine. This is every single shot you fire with a Rocket Launcher, allowing you to gain successive shots for the cost of 2 AP. With 14 AP this is 4 Shots in a row, which can wipe out an entire enemy force before they even get a turn.

ealthy – This Perk increases your Health by 35, which is going to be a lot for this character since you don’t have any points into Strength to further boost it. This will help keep you alive those times when you aren’t dropping 4 Rockets turn 1.

omb Recovery – This Perk is a great way to gain Grenades when disarming land mines. This should be often enough to net you some extra Grenades here and there, and make sure that you leave any land mines you find alone until you can safely disarm them to gain the most Grenades.

igh Impact – This Perk makes direct hits with explosives (including Grenades) automatically Critically Hit. This allows you to take out the toughest enemies by aiming directly at them with Grenades or Rockets, and this is even more true after you gain the Lights Out Perk.

last Radius – This Perk increases the range of explosives by 40%, making it easier to hit more enemies at a time. This should reduce the number of Rockets you need to wipe out the enemy force, saving valuable Ammo.

econd Chance – This Perk increases your Detection Time by 1 second, allowing you to get to your preferred spot more easily before firing your first Rocket. Not the greatest Perk, but there are few that benefit this Build so we’ll take it.

ights Out – This Perk boosts your Sneak Attack damage by 200%, which will be a total of 300% by the time you take this Perk. This allows you to all but one shot any enemy as long as you hit them before they engage in combat. This also applies to explosives, which is devastating. Once you have this you can kill most any enemy in the game in one Rocket if you can fire before combat begins.

By far the hardest part of this Build is maintaining a steady supply of Rockets in order to make it rain like you’re a million dollar rapper. The best way I’ve found to do this is by having someone in your party rush to the Powder Pack Perk in Weapon Modding in order to pick up +1 Rocket every time you loot one from anywhere. This effectively doubles the amount you will find. Additionally, having a character with a high Barter Skill and the Penny Pincher Perk will allow you to purchase Rockets at a 20% discount, saving you a bit of money when you buy several Rockets at a time.

Use your Grenades when you need good AoE damage but Rockets would be overkill. You can still get decent damage with Grenades, and when you have Lights Out these will do 300% more damage when you lob them before combat begins, which should be enough to really mess up your targets. These are cheaper and more easier to come by than Rockets, especially with the Bomb Recovery Perk. 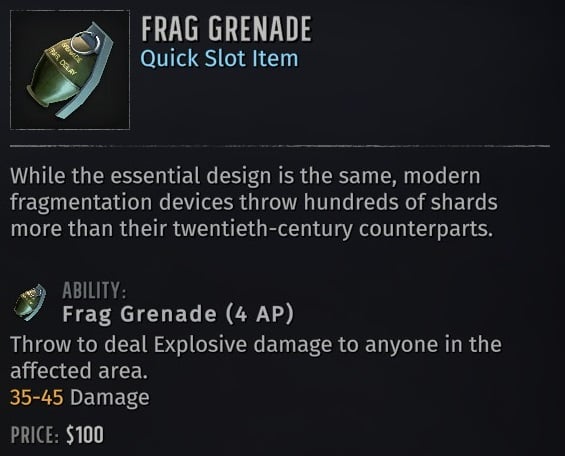 Remember to use your Pistol when you don’t need to use a Rocket. Many fights you can simply fire 1 Rocket and be in good enough shape to pick off stragglers without taking too much damage. It’s easier to acquire and use Medic Packs then it is to find Rockets, so don’t use more than you have to. Save your Rockets for the most challenging fights, ending them in mere seconds.

Remember to modify both your Rocket Launcher and your Pistol for improved damage, critical chance, and hit chance. You can also convert your Weapons to be more effective against certain damage types, so that you can deal further damage, swapping out the weapons you need as they make sense for the enemy type you are facing.

Lastly, DO NOT reload your Weapon unless you are absolutely planning on firing it before your turn ends, and be sure to turn off auto reload weapons in the game settings. This is because you can enter combat and reload your Rocket Luancher and fire for 2 AP, without having to ever spend the initial 6 AP to begin with. This will allow you to fire 6 Rockets on turn 1. This isn’t always applicable, especially when you initiate combat, but it’s best to plan as though you won’t have the opportunity to fire before combat begins!