In this Wasteland 3 Builds Guide I’m going to be showing you my Heavy Hitter Build which uses Heavy Machine Guns and Rocket Launchers to blow the living shit out of every enemy on the screen. Wasteland 3 can be extremely overwhelming for new players, and can cause confusion for veterans alike. In this Build Guide I’ll explain just how to make this Build, including what Weapons to use, what Skills to take and which Perks to pick up. If you’ve been looking for a Heavy Gunner Build, with a bit of Leadership then check this one out! More Guides on our Wasteland 3 Guides section, including the Sneaky Sniper Build.

The Heavy Hitter Build is a Leadership Build that takes advantage of the high firepower of Rockets and Machine Guns to get kills quickly in order to buff its teammates as quickly as possible with increased Damage and Critical Chance. Additionally, because it has so many Action Points it can use Rally effectively and still get off an attack on enemies, which can be challenging to do otherwise.

One very important part of this Build is the fact that the Machine Gun we are using is called Nidhogg, and it actually fires Explosive Rounds that are then buffed by the Explosives Skill Line. This means when you place points into Explosives you’re not only increasing your Rocket Damage, but also your Machine Gun Damage, which is a deadly combination to say the least. Add the Explodomaniac Background and you get even more damage! 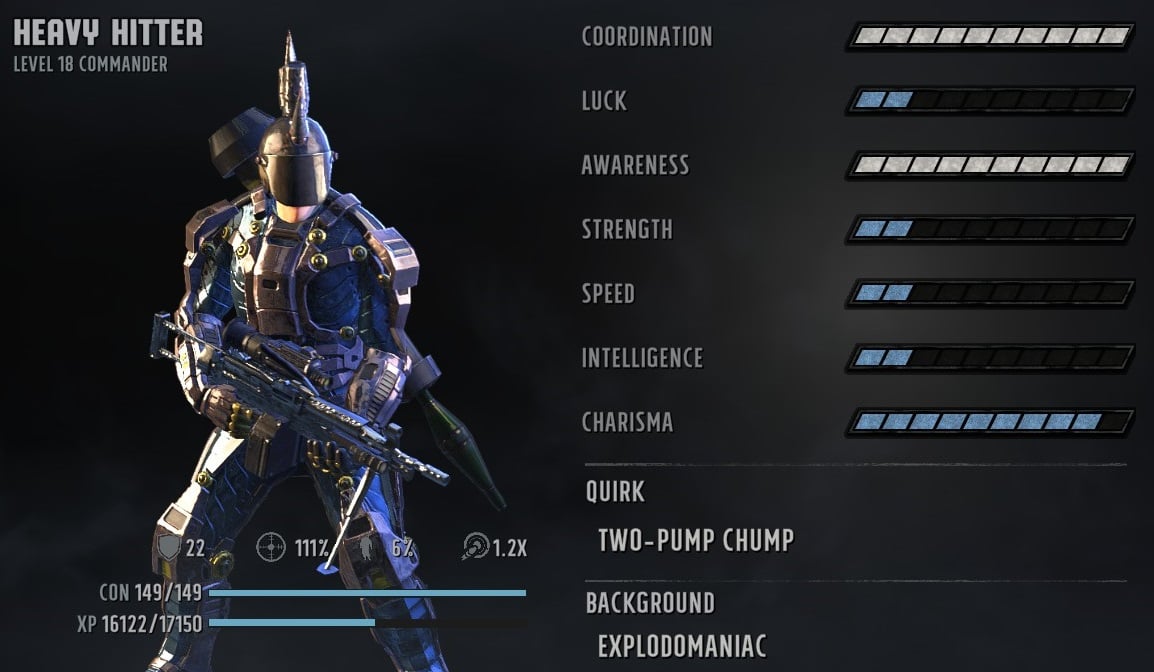 The Background I chose for this Build was Explodomaniac, because as I mentioned just a second ago, it boosts both your Rocket Damage and your damage with Nidhogg once you have it (it can be found inside a locker in the bunker in Aspen). This is a win/win combination eventually, but you won’t see any benefit from it until you have it. 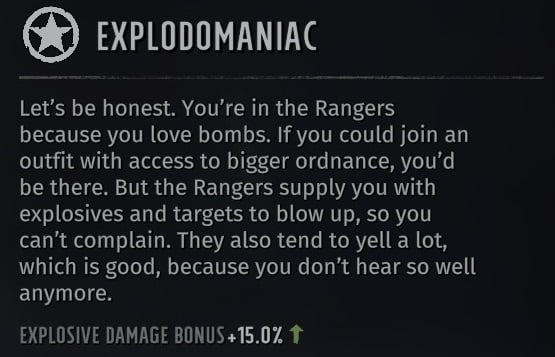 For Attributes you’re going to want to increase Coordination, Charisma and Awareness. I like to alternate between placing 2 points into each Attribute, cycling through all three of these until they are all maxed out. Once these are maxed you want to boost Intelligence for higher Crit Chance and Crit Damage.

The Quirk I use for this Build is Two-Pump Chump. The reason for that is that you need those extra AP early on in combat to cast Rally and to be able to still get a kill or two, in order to buff your teammates. You should have this done by the end of the second round, at which point you don’t need the extra AP any more. Serial Killer actually nerfs your AP every round, assuming you’ll get a kill to make up for it. But early on in the game you likely won’t benefit from it much, and later in the game you really won’t need it. 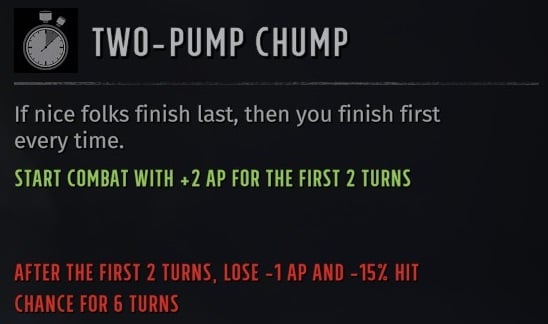 For Skills you want Big Guns, Explosives and Leadership. You want to prioritize Big Guns because you will desperately need the extra Hit Chance it provides, but you can bring these all up roughly at the same time. You should max them all out eventually by the end of the game, or you can add other Skills if you’d like more utility. 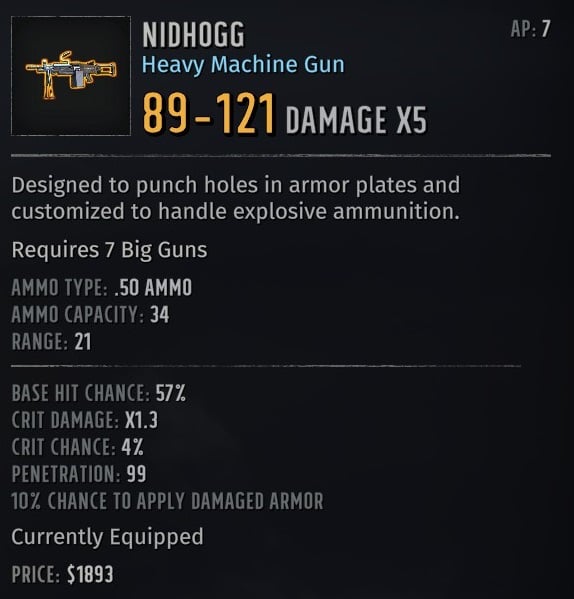 You can use any Rocket Launcher you want, but make sure to mod it with increased Critical Chance and Critical Damage. Once you gain High Impact, you’ll automatically Crit when launching a Rocket directly into something, so you want a higher multiplier. And you don’t need to worry about Hit Chance with Rocket Launchers, since they can’t miss, so increasing the likelihood that you Crit things you don’t directly hit will be valuable.

Armor-wise it doesn’t really matter what you use, but use the highest protection you can and use a Helmet like the Trooper Helmet to further boost Hit Chance. You can’t have enough Hit Chance with this Build, so take it everywhere you can get it.

In this section we’ll take a look at which Perks to take for the Heavy Hitter Build, and what order you should take them in. Which Perks you can take are regulated by how many Points you have in each Skill, so this should also give you a road map of where to place Skill Points so that you can obtain these in the proper order.

Move Up – This Perk increases your Combat Speed on the first turn of an encounter if you are using a Heavy Weapon. This will allow you to get into a good position, so that you can hunker down and open fire on enemies around you.

Rally – This Perk can give every person in your party +2 AP for the cost of 4 of your AP. This is particularly good for this Build because often times you have AP that isn’t enough to fire your HMG again, and you can spend it to boost the AP of your party members. This usually happens on turn one, after you’ve moved a bunch to get into a good position.

Suppressive Fire – This Perk allows you to debuff enemies in a wide arc in front of you, while dealing some damage to them at the same time. It not only slows them down, but also reduces their Hit Chance by 20%, which helps to keep your party alive. It has a long cooldown, so wait for the opportune moment to use it.

emoralize – This Perk reduces the Hit Chance and Crit Chance of an enemy for 2 AP. Again, much like Rally, you often have left over AP after firing your HMG, but not enough to fire again, and this is a great way to spend it. The added bonus is that if you use Suppressive Fire on a Demoralized target, you do +300% Damage!

ortar Blast – Unlike the Recon Rocketeer Build, we’re going for quality over quantity when it comes to Rockets, and this ability can help you kill things with less Rockets. The downside is that you have to anticipate where your enemies will be in a turn, but there are plenty of fights where this is not hard to do. Additionally, this Skill has a wider AoE than your standard Rocket, making it likely to hit more targets if you use it well.

ealthy – This Perk increases your Health by 35, which is going to be a lot for this character since you don’t have any points into Strength to further boost it. You need to stay alive to buff and support your team, and this can help you do that.

igh Impact – This Perk makes direct hits with explosives (including Grenades) automatically Critically Hit. This allows you to take out the toughest enemies by aiming directly at them with Grenades or Rockets. Take advantage of this to get quick kills that will then buff your party members.

teady Shot – This Perk will increase your Hit Chance and Evasion when in Low Cover, which is what you want to aim for with this Build. This frees up High Cover for other units, and helps to keep you alive. Look around when combat begins and try to find a good position in Lowe Cover.

last Radius – This Perk increases the range of explosives by 40%, making it easier to hit more enemies at a time. This helps to increase the number of targets you Hit, which increases the odds of a Multikill, which will then boost your party members.

Remember to use Ambush with your HMG early on in the game, as each point you consume to go into it gives you a +5% Hit Chance. If you use 7 AP, that’s +35% Hit Chance, which is a staggering amount. This can make the difference between you landing all your shots, or missing half of them. Take advantage of this free Hit Chance by using Ambush when you can.

On turn one if you buff your party with Rally, get into a good Low Cover position, and then Demoralize a boss enemy, you’ve had a very good first turn with this Build. Then on Turn 2 you can begin opening fire, starting to provide Leadership bonuses. However, you could just as easily open with a Rocket under the right circumstances in order to wrack up a quick Multikill, so you’ll have to pay attention and determine what the best option is. Sometimes it’s better to let enemies group up first before attacking with this Build, and since you can buff and debuff that’s no problem. 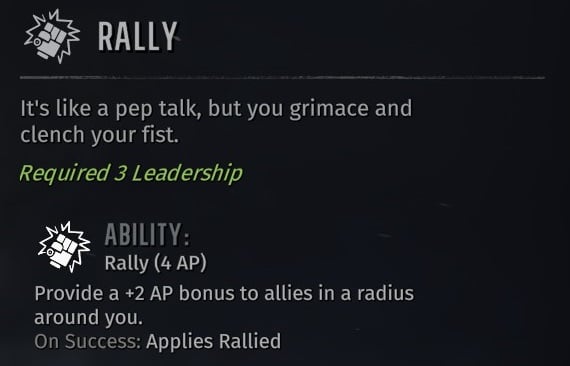 Consider taking 2 Points into Sniper Rifles for the Mark Target Perk in order to further debuff enemies that you are facing. You’ll have terrible Hit Chance with this Build early on, and it gives you an extra 15% for 2 AP. That’s a very good trade off! Especially, since it will also help your party members as well!

Lastly, load up on Grenades because this Build uses them to extremely good results. You’ll have +65% increased Explosion Damage at max Explosives, which really helps to boost the damage they deal. And that’s not even talking about the High Impact Perk, which benefits Grenades as well. Buy these wherever you go, so you always have some if you need. They are another great way to spend AP and wrack up Multikills if you don’t have enough AP to fire your HMG again.