In this Wasteland 3 Builds Guide I’m going to be showing you my Fantastic Firestarter Build which uses a Flamethrower and a Pistol to set enemies on fire, or kill them outright in one engulfing burst of flames. Wasteland 3 can be extremely overwhelming for new players, and can cause confusion for veterans alike. In this Build Guide I’ll explain just how to make this Build, including what Weapons to use, what Skills to take and which Perks to pick up. If you’ve been looking for a Flamethrower Build then check this one out! More Guides on our Wasteland 3 Guides section, including the Sneaky Sniper Build.

The Fantastic Firestarter uses a combination of Flamethrowers and a unique pistol called K-Cannon to set enemies on fire, or just outright kill them with Fire Damage. Fire Damage is especially deadly to organic enemies (Humans, Mutants, Animals), and deals 30% increased damage to these enemy types. On top of that we gain +15% Fire Damage from Disciple of Metal, +30% damage from Weird Science, +30% Damage from the Overcharge Perk, and +25% Fire Damage from the Heating Element Perk, for an extra +100% Damage on top of that bonus! What more could you want? 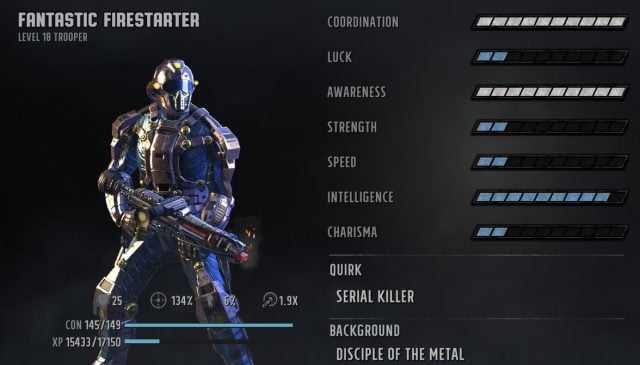 The Background I chose for this Build was Disciple of Metal for the 15% increase in Fire Damage. Both of our Weapons will use that damage type (as soon as you acquire K-Cannon), but until you get it it will still boost your Flamethrower Damage by 15%, which isn’t a small amount.

When it comes to Attributes I like Coordination, Awareness and Intelligence. This is a pretty standard setup for any ranged Build. Coordination helps with Action Points, Awareness with Hit Chance and damage, and Intelligence with Critical Chance and damage. I like to alternate between placing 2 points into each Attribute, cycling through all three of these until they are all maxed out.

The Quirk I like for this Build is Serial Killer, because it is not hard to get kills with this setup, especially against organic enemies. 3 more AP is another attack with your Pistol and that can often get you another kill as well. You could take Pyromaniac for even further Fire Damage if you want though, but I didn’t find it was necessary, and the extra AP usually helped out more.

The Weapon Setup I like to use for this Build is a Flamethrower in one slot, ideally the highest damage one you can find, and the K-Cannon in the other slot. What’s really great about this combo, is that the Draw! Perk allows you to fire off your Flamethrower for free if you reload when it’s empty, and it can only hold 2 fuel at once, so this means every 3rd attack costs you nothing.

Additionally, you can modify your Flamethrower late in the game with a Quickfire Mag, that reduces the capacity of your Flamethrower by 1, but reduces the AP cost of reloading to 1. This means that after the first shot, all subsequent shots will only cost you the 1 AP to reload, which is insane! Also be sure to add the Extended Choke to your Flamethrower in order to gain huge range, at the cost of a bit of firing arc. Flamethrowers have a huge arc, so you can really benefit from this Range increase! 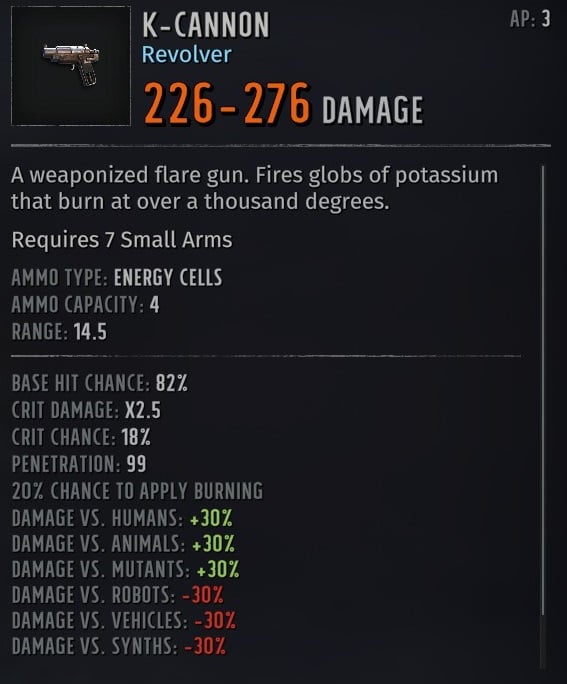 For Armor it doesn’t really matter what you wear but there are some great helmets with Crit or Hit Chance that you should be on the look out for and equip them when you see them. Otherwise just don’t use anything that will lower your Hit Chance, since you will need this for your Pistol.

In this section we’ll take a look at which Perks to take for the Fantastic Firestarter Build, and what order you should take them in. Which Perks you can take are regulated by how many Points you have in each Skill, so this should also give you a road map of where to place Skill Points so that you can obtain these in the proper order.

ealthy – This Perk increases your Health by 35, which is going to be a lot for this character since you don’t have any points into Strength to further boost it. You need to stay alive in order to burn everything to a crisp, and this Perk can help.

Terrorizer – This Perk makes it so that enemies you set on fire, also have a -15% Hit Chance. This one can also help to keep you and your party safe, just by doing what you would normally do anyway, so definitely grab it.

vercharge – This Perk can boost your damage by 30% for 1 AP, which is fantastic. The only draw back is that it has a 1 in 20 chance of blowing up your weapon in your hand and you dying. This is rare, however, but bear in mind you may need to reload now and again.

raw! – This Perk allows you to fire a free shot after reloading an empty Magazine. This is every second shot you fire with a Flamethrower, allowing you to gain an extra shot for free every 3rd shot. This can really help you crank out the damage, especially if you modify your Flamethrower to hold one less ammo and cost 1 less to reload!

Heating Element – This Perk gives you +25% Fire Damage outright, which benefits this Build perfectly. You can’t have enough damage with this Build, and this Perk just piles it on! Fry your enemies with extremely hard hitting attacks!

Wide Spread – This Perk further increases the arc of your Flamethrower by another 35%. Between this and your Mods, you’ll have so much range and arc that you can hit nearly everything on the screen with one burst from your Flamethrower. Just be careful not to hit your party members or they will not be happy!

You can also make a similar Build to this one with a Shotgun instead of a Pistol if you can find a Shotgun that does Fire Damage, or if you mod one to have it. I find Pistols to have better single target damage though, and they are good for picking off stragglers when you don’t need to aoe with your Flamethrower.

Don’t forget to use Overcharge when you have extra AP, but not enough to fire another shot with your Flamethrower or your Pistol. This will boost your damage and may be enough to kill your target. Do some math and try to calculate how many Action Points you need to move attack, and attack again if possible and see if there is enough AP there to also use Overcharge. It’s great for using AP that you can’t otherwise find a use for! 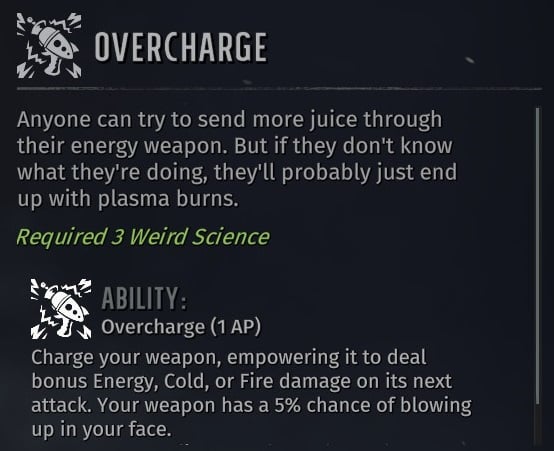 You can take a couple points into Sniper Rifles if you want in order to use Mark Target, which can help with your Pistol shots. It’s not 100% necessary for this Build, but it can help with early game Hit Chance issues, and it does also benefit your teammates.

Remember not to reload your weapons unless they are on empty in order to make best use of the Draw! Perk. It might even be wise to set auto reload out of combat off in the settings when using this Build, so that you can reload sooner, giving you a free shot more often. If you can go into combat with an empty clip then you won’t have to spend the initial AP to attack, but instead will just spend the AP reloading and then fire for free. This saves you a good amount of AP over the course of a fight!