In this Wasteland 3 Builds Guide I’m going to be showing you my Drunk-Fu Fighter Build which uses Bladed Weapons to slice and dice its enemies to death. Wasteland 3 can be extremely overwhelming for new players, and can cause confusion for veterans alike. In this Build Guide I’ll explain just how to make this Build, including what Weapons to use, what Skills to take and which Perks to pick up. If you’ve been looking for a Melee Build then check this one out! More Guides on our Wasteland 3 Guides section, including the Sneaky Sniper Build.

The Drunk-Fu Fighter Build uses a combination of Bladed Weapons, high Critical Hit Chance, and Animal Companions to one shot its target in many cases. You can get 25% Critical Hit Chance from maxing Intelligence. Helmets can give you even more Critical Chance, and Weapon Mods can add some as well. When combined with the Pursuit Perk, this reaches over 100% later in the game, guaranteeing a Critical Hit on your first attack.

Additionally, your Melee Damage is increased by nearly 100% due to some investment into Strength, the Lethal Weapon Background, from the Way of the Squeezins Quirck, and from Beer or Alcohol itself. 100% Damage with an automatic Critical Hit that does 3.2x the damage or more is absolutely devastating! 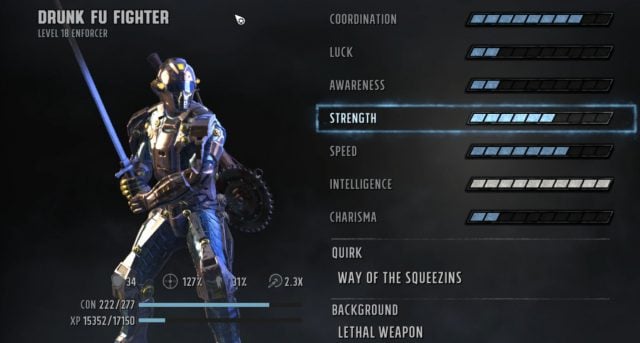 The Background I chose for this Build is Lethal Weapon to give 10% extra Melee Damage. This is a pure melee Build so there is absolutely no reason not to take it. You won’t need Critical Hit Chance with this build later in the game, so while Goat Killer is nice early on, it becomes irrelevant later. 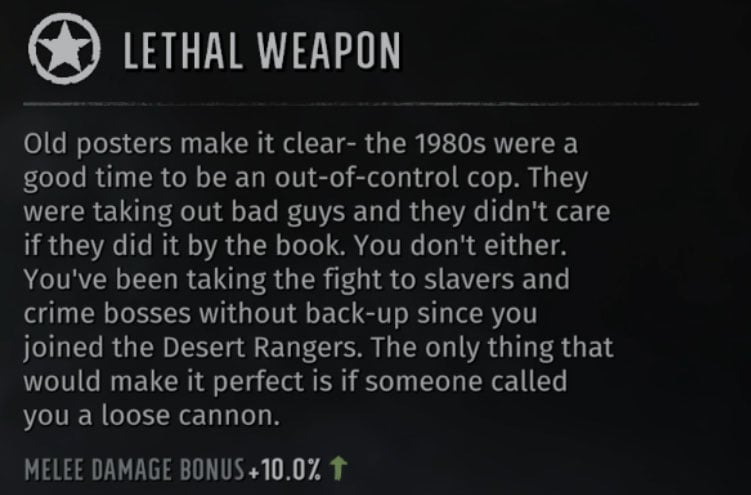 For Attributes I like to take Coordination up to about 6 or 8 points to gain some extra Action Points, since you need to move and attack with this Build. Melee Attacks with Bladed Weapons only use 3 AP, but you’ll need all you can get anyway, especially until your Combat Speed is higher.

You’ll need a few points into Strength, and some into Speed in order to boost your Health, Melee Damage, Combat Speed and Evasion. All of these are great for Melee. Eventually, you’ll also max out Intelligence as well.

I like to spread points around when making this character, giving them a bit of everything since they can really use all of it. I think it’s wise when making this Build to take each stat up two at a time before moving to the next stat, and cycling through them all this way, sort of keeping a balanced stat spread until Coordination and Intelligence pull ahead. It’s a very weird looking stat spread, but it works.

The Quirk we take for this Build is Way of the Squeezins, which debuffs your Melee and Ranged Damage while sober, but boosts both by 50% while drunk. Since most alcohol gives you a 25% increase to Melee Damage anyway, this ends up being +75% Melee Damage when drunk. That is a ton of damage, and that is multiplied by your Critical Multiplier. This gives us massive Crits that usually one shot most enemies. 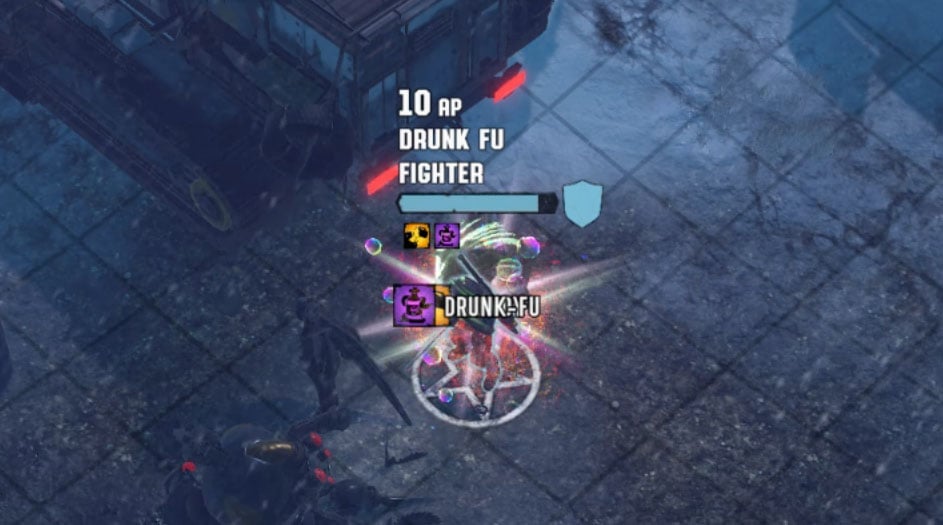 For Skills you want to take Melee Combat, Animal Whisperer and Armor Modding. First Aid is also not a bad choice if you have left over points, because you will get hit a bit, and this can help heal you up more. You need to take Melee Weapons to max in order to get the highest Hit Chance you can, and to use the best Melee Weapons available. Animal companion only needs to go to 7 in order to get the Vengeful Bond Perk. Extra points go into Armor Modding so that you can boost your defense, helping to keep you alive.

You’ll want to take Melee Combat and Animal Whisperer up together when first making this character, prioritizing Melee Combat. Once Animal Whisperer is to about 5 or so you can start placing points into Armor Modding. Animal Whisperer is not needed for this Build, but I like to use it go gain extra damage, and give enemies another front lines target to shoot at, helping you survive a bit easier. Additionally, you can use their buffs to boost your own damage. For example, Cats increase your Critical Chance by 12% with the Spirit Animal Perk. 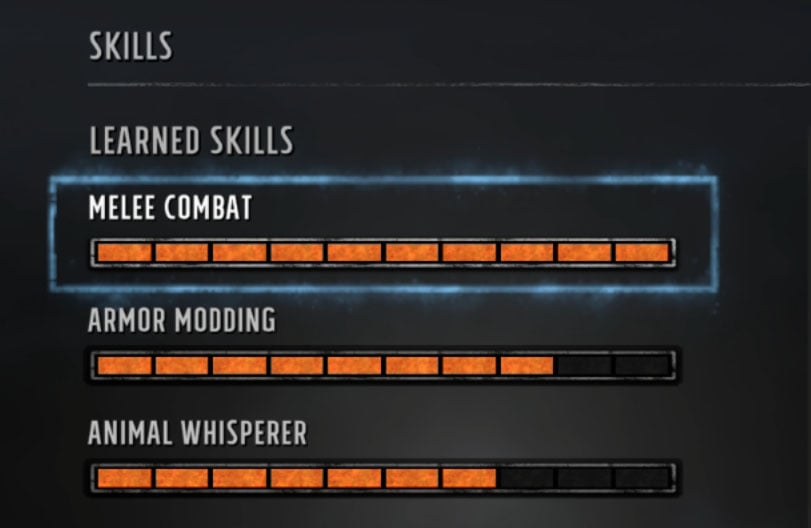 The Weapons we use for this Build are two Bladed Weapons, and it doesn’t particularly matter which two you use, but you want to aim for the highest damage ones you can find. It’s necessary to have 2 equipped though, in order to gain the extra Combat Speed from the Striking Distance Perk. Make sure to Mod them to do increased Critical or Hit Chance.

The Armor you want to use for this Build should be that which provides the highest possible protection for the amount of Strength you currently have. By the end of the game this should be Power Armor, but you’ll also want to use a helmet that provides Critical Hit Chance. Be sure to Mod your Armor to take even less damage and boost your Combat Speed. 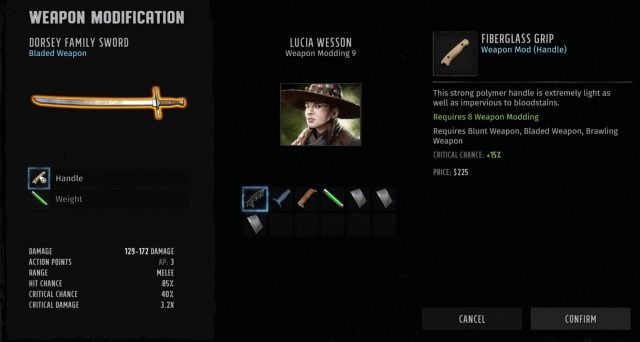 In this section we’ll take a look at which Perks to take for the Drunk-Fu Fighter Build, and what order you should take them in. Which Perks you can take are regulated by how many Points you have in each Skill, so this should also give you a road map of where to place Skill Points so that you can obtain these in the proper order.

Bleeding Strike – This Perk allows you to do an attack for one more AP than your normal attack costs that does +100% Damage and sets Bleeding, but gives you -20% Hit Chance. This is a very situational Skill, but you can use it to one shot many enemies, especially those that are Burning, because it does an even further +200% Damage to Burning targets.

Animal Training – This Perk improves not only the Health of your Animal Companion, but also the damage. Your Animal Companion can really help to soften up enemies for you early in the game, and take fire that would otherwise find its way to you, so this is a great Perk to have.

Striking Distance – This Perk increases your Combat Speed by 0.5 if you have two Melee Weapons equipped. Every 1 point of Combat Speed increases the amount you can move for 1 AP by 1 square. This means at 3 Combat Speed you can move 3 spaces for 1 AP, and you need to move a lot in order to get into Melee range.

Spirit Animal – This Perk doubles the bonus you gain from your Animal Companion. Each Animal Companion provides a different bonus, so look for the one you want and double it. Cats for example grant 6% Critical Chance, but with this Perk it becomes 12%. Mountain Goats grant 0.1x Critical Multiplier, and with this Perk it’s 0.2x, but they hit much harder than Cats. Try recruiting different animals and see which works best for you.

Hack ‘N’ Slash – This Perk gives you a free attack with a Bladed Weapon if you’ve already attacked a target twice in a row. This Perk is much more useful earlier on in the game when you do less damage, then it is later in the game when you can one shot many enemies. Still it will come in handy when facing bosses so that you can kill them in 2 or 3 hits.

Pursuit – This Perk gives you an extra 25% Critical Chance if you’ve moved 3 spaces to attack with a Bladed Weapon. This passive ability is what pushes your Critical Strike Chance to 100% later in the game with your first attack each round. You almost always need to move 3 or more squares, and since your Combat Speed should be high, this will cost very little AP.

Vengeful Bond – This Perk increases your Critical Hit Chance by 50% and grants you 2 AP if your Animal Companion falls below 25% Health. This won’t happen all the time, but when it does you will Critically Hit with every single attack you do. It’s lights out for the enemy when this happens!

Mind your Hit Chance with this Build because it can be problematic. Be sure to heal all injuries if you get any, because you will have a tough time hitting enemies otherwise, especially early on. Use Mods that boost Hit Chance early on, and swap them out for something else like Crit Chance later on when you’ve invested more into Melee Combat.

Speed also gives you Evasion in Wasteland 3, which will help to protect you from damage. Remember that you can Crouch for an extra 10% Evasion, or you can Defend for an extra 5% per Action Point used. Sometimes you won’t be able to make it to cover, but Crouching or Defending can still save you. Also note that enemies have lower Hit Chance when you’re right up in their face, just like you do, so staying up on ranged enemies actually protects. If you can’t kill a ranged enemy right next to you, just Crouch or Defend near him and you should be ok.

This Build works insanely well if you have a party member that has Leadership. Leadership can provide you with increased Critical Chance and Melee Damage, both of which really help this Build. Consider adding one to your party if you’re using this Build (if you don’t have one), because it makes this Build so much better.

Lastly, you should aim to drink a Beer before each combat in order to boost your damage by 75%. When the buff from this wears off you will lose -2 AP every round, so try to prevent this from happening by drinking another Beer just before the timer expires, or using Crystal Clear to remove the negative effects. If you are Hungover and drink a Beer, you’ll still suffer the -2 AP penalty, so try not to let this happen!