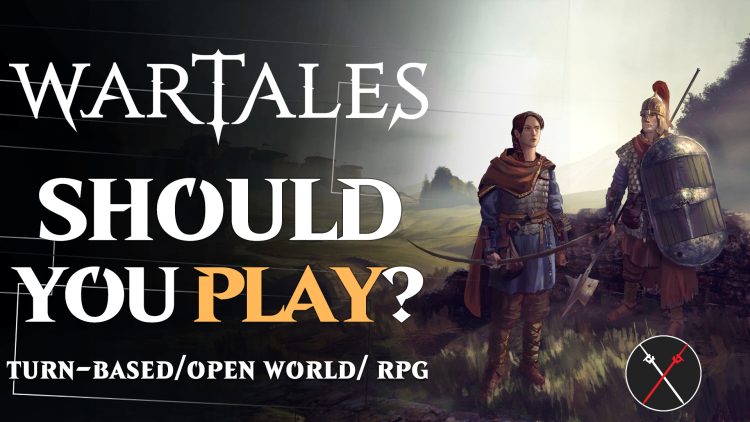 In this Wartales Gameplay & Features Impressions: Medieval Open-World RPG, I’m going to talk about the combat design, gameplay mechanics, compendium, paths, and other features of the new open-world RPG developed by Shiro Games and published by Shiro Unlimited.

Wartales is a medieval, adventure Open-world RPG where you manage mercenaries with skills based on their class and the weapons they wield.

When it comes to combat, you can expect a tactical, turn-based system, which values the positioning of your party. Additionally, in order to thrive and survive as a group, you need to take rests, consume enough food, and pay wages. 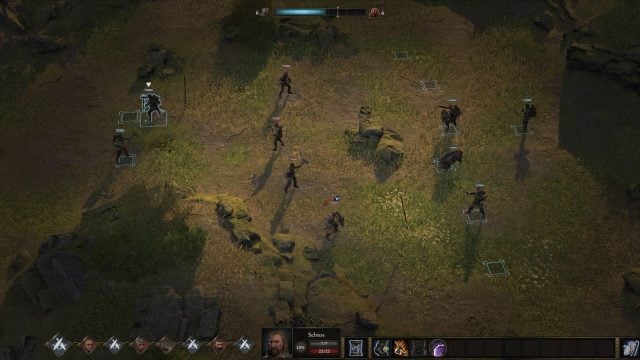 Wartales is set nearly a century after the arrival of a deadly plague that can turn its victims into ravenous beasts. The Edoran Empire begins to crumble as a result of greed and hostile intentions of its neighboring nations. With the empire on the brink, your goal is to amass wealth with your fellow mercenaries in order to survive. 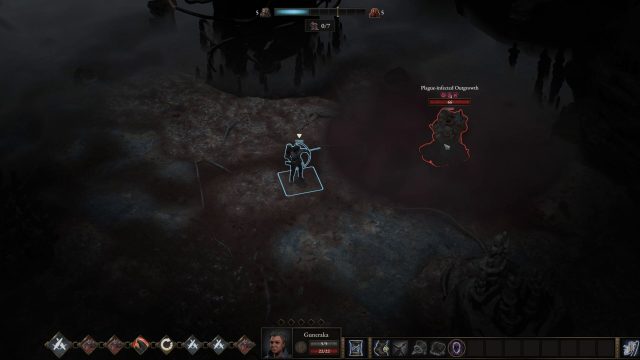 As you explore the world, you’ll also learn more about the numerous factions involved, and what their roles and motivations are. Unlike most RPGs that start with the standard character creation, you begin by assembling your companions based on the destinies you choose for them. They can be bandits hoping to escape the law, friends seeking a lifetime of adventures, and even farmers with the goal of improving their lives. The choices you make provide you with different buffs and debuffs such as additional bread but lesser krowns (the game’s currency). 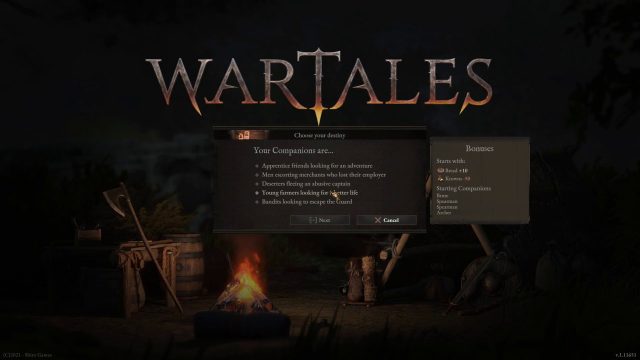 Furthermore, you’re able to pick a group consisting of 4 classes, however, they don’t have accompanying descriptions in terms of what their specializations, attributes, skills and equipment are so you’ll have to learn them along the way during your first playthrough. There are many other features that make the game interesting such as its survival aspects, particularly the camp, where you can eat food to replenish both your health and AP, and to craft useful items.

In terms of the visual style and audio, the game is inspired by a medieval fantasy setting so you’ll come across sprawling wildlife areas, snowy mountains, and rivers that stretch for thousands of miles. Wartales is thematically similar and reminiscent to classic RPGs such as Baldur’s Gate and Icewind Dale, even with regard to its audio. When you’re exploring and discovering multiple regions, you’ll be exposed to calming and instrumental music but when you’re fighting against bandits and wild animals, you’ll hear thrilling and ominous beats. 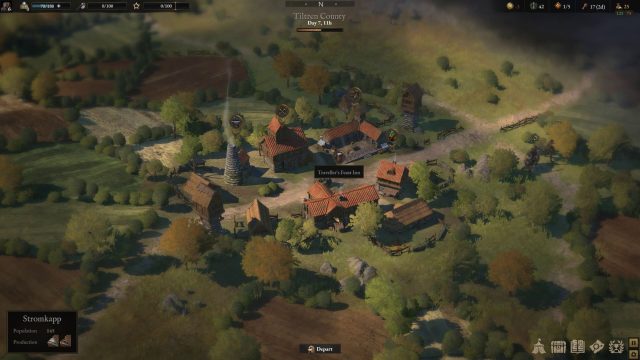 However, the sound effects could use some more work since there’s little to no distinction between impaling an enemy with a spear versus ramming a heavy hammer against him. At the moment, there’s also no voice acting. I hope the developers will be adding this in the future in order to exhibit a world filled with lively NPCs instead of leaving how they sound like to the player’s imagination.

Wartales is a complex turn-based RPG that includes a multitude of features. Currently, however, the game lacks tutorials, tooltips and sufficient descriptions to guide players into understanding its mechanics, which can be frustrating for those who are new to the genre.

Right after picking the backstories and destinies of the party, you immediately embark on perilous adventures and fight enemies who may be too strong for your level, given the open-world nature of the game. It takes a lot of trial and error at the beginning, but when you figure out what’s happening, the overall experience becomes satisfying. 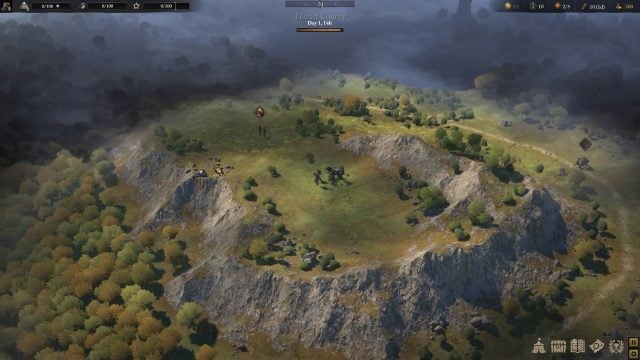 There are 6 starting classes available, namely the Brute, Archer, Ranger, Swordsman, Warrior, and Spearman. Only the Archer deals ranged damage whereas the rest of them inflict melee damage using different weapons. The Brute initially wields an Old Club and Barrel Lid while the Ranger, who acts like a Rogue and does wonders when backstabbing targets, utilizes a Rusty Shiv.

What’s interesting is the skills associated with the weapons they have equipped. For instance, if the Spearman has the Farmer’s Pitchfork, he gains access to the Impale Skill, which deals double the damage from a distance and knocks back targets in the process. Removing this pitchfork transforms the respective skill into a punch. However, you also have certain passive and active abilities that are directly tied to the classes you select. 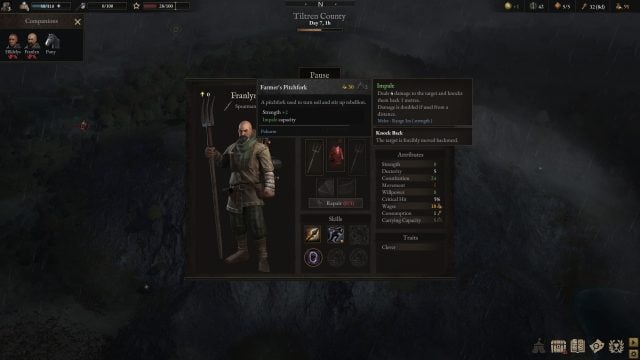 Passive Abilities let you replenish your AP at level 2 and are denoted as circles. On the other hand, Active Abilities consume AP and are represented as squares in your skill tree. You can then pick a subclass upon reaching level 3. For example, the Warrior becomes a Berserker, Executioner or Sentinel, each with their corresponding abilities.

In addition to the bonuses you get when creating your party, you also receive attribute boosts depending on your chosen Profession. You’re able to unlock Professions by participating in any of their associated activities. For example, if you wish to gain access to the Thief Job, you should attempt to steal from any NPC. 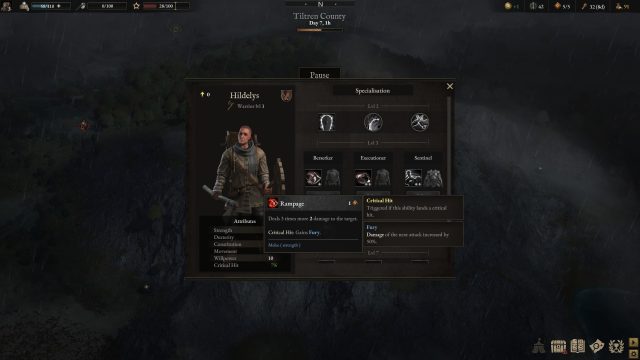 There are numerous professions available in Early Access such as the Miner to boost Constitution, Thief to raise Dexterity, and Angler to increase Willpower. Moreover, these jobs allow you to perform a variety of actions like mining ores for crafting items, picking locks, and catching fish, respectively. Note that you’re able to easily switch between them, which won’t cost you anything. 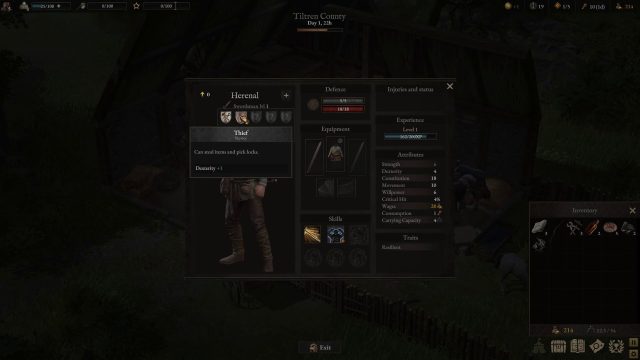 Initiating combat is fairly simple since you can easily antagonize sellswords you cross paths with and accept bounties to fight against murderers and rats who infest villages. 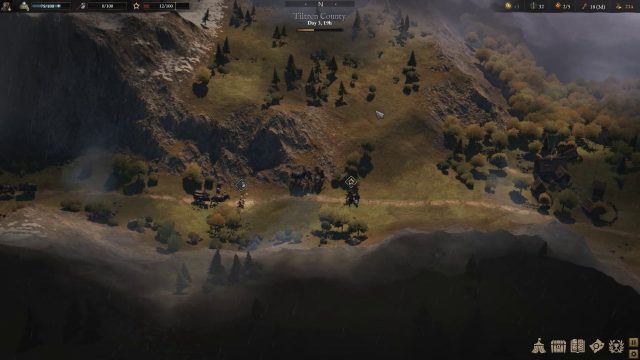 In every encounter, there’s an initiative system to determine which side attacks first. Much like X-COM, you can choose the order your party members take actions in.

Engagement and positioning are highly essential mechanics because they influence who lives and who dies. For example, when an opponent is already engaged with your Archer, you’ll no longer be able to retaliate using your bow, so you will have to resort to punching that same enemy instead, because of the insufficient distance between the two of you.

For melee damage dealers, when you’re already focused on attacking a creature or bandit, you won’t be able to target anyone else unless you disengage from them. However, doing so may result in receiving damage due to an Attack of Opportunity, which is similar to other RPGs.

Furthermore, to make the most out of these melee classes, you’ll want to wield two one-handed weapons like a shiv and an axe to perform double attacks per turn. Alternatively, you can equip weapons such as a Rusty Two-Handed Hammer to execute Ram, which inflicts massive damage against two or more adjacent enemies. Remember to add at least one Archer to your party so you can safely deal damage from afar. 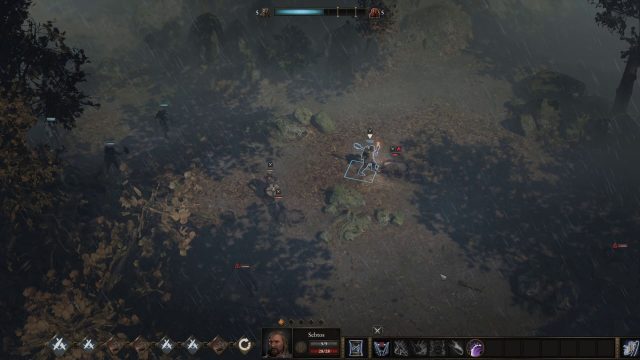 In terms of positioning, you’ll want to consider the placement of your allies since there’s friendly fire in the game. You can accidentally inflict damage with your bow or another AoE skill like Cleave if they’re situated beside your target so be very careful, otherwise, you might end up killing them.

Although you’re able to replace companions by recruiting other mercenaries, the experience is often bittersweet, especially after you’ve invested in improving their attributes and leveling them up. 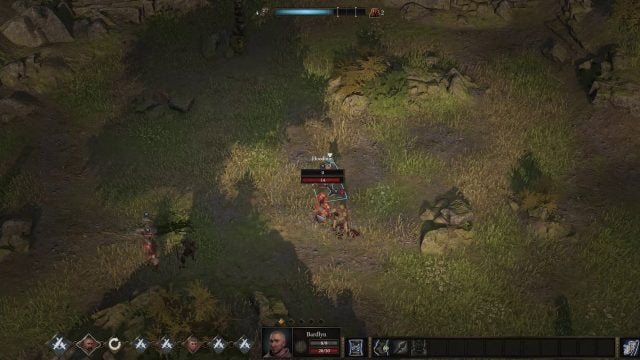 Despite having an intricate combat design, I do hope that formation options will be added in the next updates similar to the ones we have in Pathfinder: Wrath of the Righteous. It would also be good to use AP for movement as opposed to limiting their functionality for certain active abilities in order to further enhance the strategies necessary to win encounters.

From time to time, it’s important to set up camp so your party can take a good, long rest. Here, you’ll be able to feed them and pay their wages to raise their happiness, craft miscellaneous items like lockpicks and fish hooks, and restore their health and AP.

Once fully rested, the fatigue condition won’t slow down your movement speed when exploring areas, nor will it decrease your Strength and Dexterity. Happiness is an essential feature in Wartales that you’ll have to monitor as it determines how content the party is. 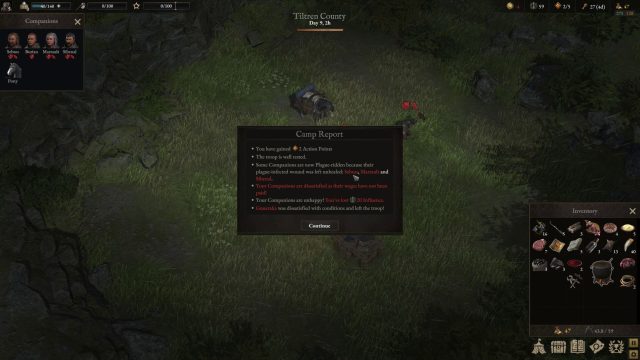 If your mercenaries are well-fed, they’ll most likely stay, but if you fail to pay their wages, the probability of them leaving significantly increases by the day so you need to constantly earn money by selling irrelevant items and completing bounties. Note that fleeing from combat also reduces their happiness so choose your battles wisely.

Next are Wartales’ compendium and paths. The compendium houses all of the blueprints and recipes you discover. What’s interesting about this is the knowledge section, which encourages you to thoroughly explore the medieval world. As such, you gain points to unlock specific abilities like running and increasing the party’s carry capacity. You even have the option to indulge in cannibalism to survive on human corpses. 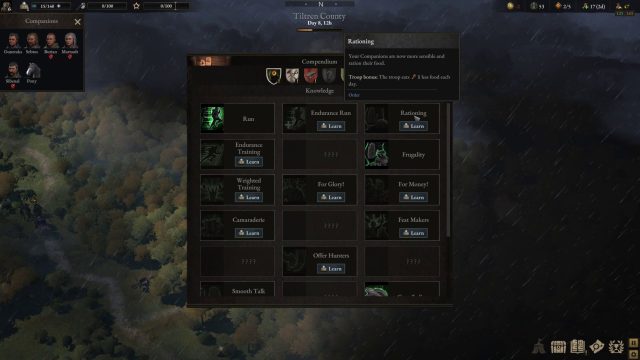 Meanwhile, paths show the milestones you’ve achieved together with the extra bonuses you’ve earned as a result. For example, if you’ve stolen enough items, and eventually level up Crime and Chaos, the list of bounties increases to include assassination missions. Paths are a good way to illustrate your progress and be rewarded for it.

To add to the depth of what the game has to offer, you should take note of the suspicion and influence mechanics. A high level of suspicion rouses the authorities, who will make you pay for your crimes. But remember that you can bribe them, initiate a fight, or simply return the items you’ve taken to atone for your actions.

Similar to most choice-based RPGs, you also have the power to convince NPCs to agree with your line of thinking and recruit companions by applying your influence over them. Influence points are earned by finishing quests and winning in combat. 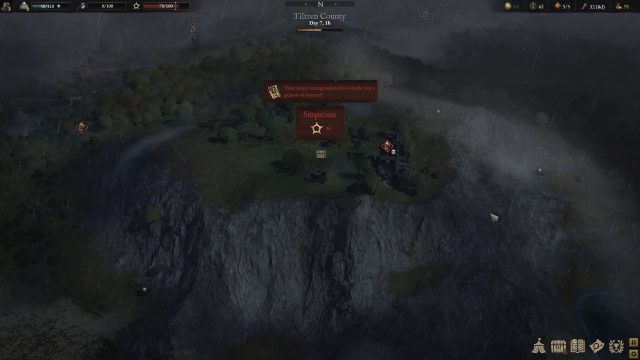 Wartales has a well-thought out turn-based combat system that’s challenging and has potential but it does require additional nuance, polishing and balancing. It also offers decent visuals, good finisher skill animations, and noteworthy music as well as a variety of classes, skills and weapons, which you can utilize to your advantage to come up with notable builds. 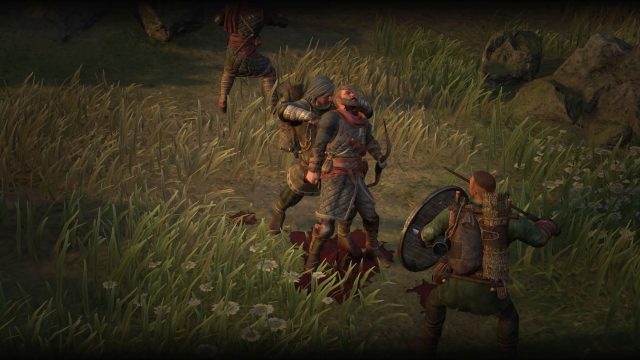 However, there are some issues including bugs, crashes, lack of voice acting, and sound effects distinction, which will hopefully be addressed in Early Access. If you’re looking for an open-world RPG with party management elements and survival features, then you may want to consider purchasing Wartales. The game launches today on Steam.

What are your thoughts on Wartales so far? What did you like and dislike about the game during the demo? Let us know in the comments below! Catch more hands-on impressions in our latest previews Anvil Gameplay & Hands-On Impressions: Sci-Fi Action Roguelike Shooter and Myth of Empires Early Access Gameplay Overview.