In just a few days Warhammer Chaosbane will release for Playstation 4, Xbox One and PC. Warhammer may be the most popular series of all time, when it comes to role playing, and there have been so many iterations it’s nearly impossible to keep track of them all. However just having the Warhammer title doesn’t mean a game is an instant hit, and in fact the franchise has had its share of “duds”. This leaves a lot of players wondering, “How will Chaosbane measure up?”. In this Review I’ll attempt to answer that question and more. Please note that I played on the PC version of the game, and my impressions are based upon this version.

Chaosbane begins in the city of Nuln, located within The Empire. Players will take on quests in a search to free Magnus, one who would unite the people against the forces of Chaos. They will travel to the city of Praag, located in Kislev, as well as the Frozen Forest of Knives in Norsca. The story, though very generic in my opinion, was not any worse than other Warhammer games. 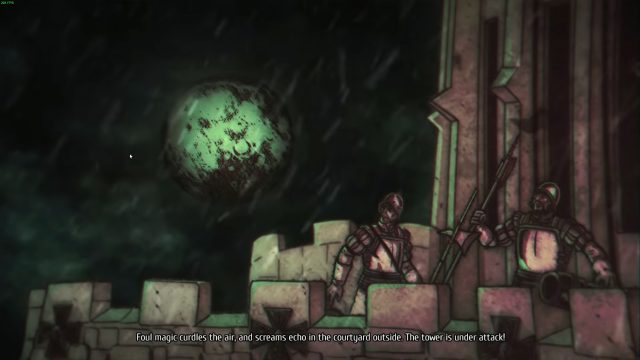 The locales of the game all look and feel different, and I thought Eko did a great job of adding some subtle details in the background that you may not even notice because of the game’s non-stop action. Tentacles move, lights flicker in the distance, and the world doesn’t seem as static as Diablo 3. This is something I enjoyed more and more as I progressed the game, and is something I began looking forward to.

The gameplay of Warhammer Chaosbane is about what you’d expect from a Hack n’ Slash ARPG. Players wade through hordes of enemies, gain experience and new Skills, as well as loot. There are 4 Classes, that all play a bit differently, and have their own unique Skills and Equipment. Because this is the primary focus of these types of games, I’m going to dive more into detail on this aspect, beginning with Skills. 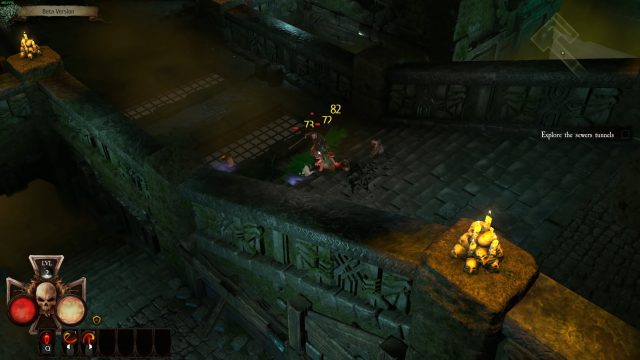 When players gain experience they gain a level, and a Skill Point. Players do not need to “purchase” Skills with these points, but rather they are needed to slot Skills. Each Skill costs a certain amount of Skill Points in order to slot, and more powerful Skills cost more Skill Points, with the most expensive requiring 18 Skill Points. Skills are also unlocked as you level up, so you won’t have access to all of these right away, and you will gain these as you progress the game. 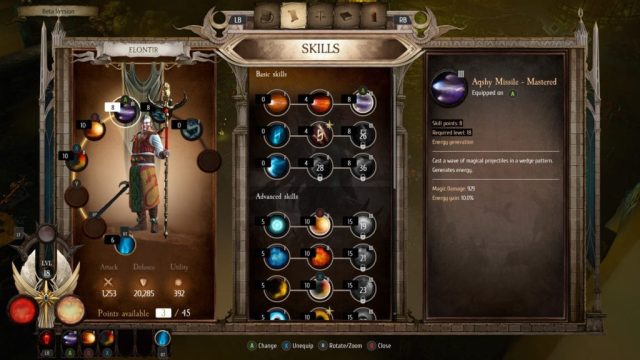 Players will also acquire Skill Points from progressing the game’s Story and will max out at 100 Skill Points. Builds will be comprised not only of gear, but also how to spend these 100 Skill Points in a manner that works. Players can slot any combination of 6 Basic and Advanced Skills, they can slot 3 Passive Skills and 3 Fan Skills. This means that there are important decisions that need to be made here, but players can play around with combinations at will, so there is no risk involved.

Players will also unlock something called the God Skill Tree once they get to a certain point in the game, and this will allow them to spend Fragments and Favour Points. These will give the player Passive upgrades like more Health, more Damage or Cooldown Reduction, but also new Active Skills that are quite powerful. This aspect reminds me a lot of Path of Exile, and players will have to make decisions about where to go from the starting point, and different directions have varying bonuses. 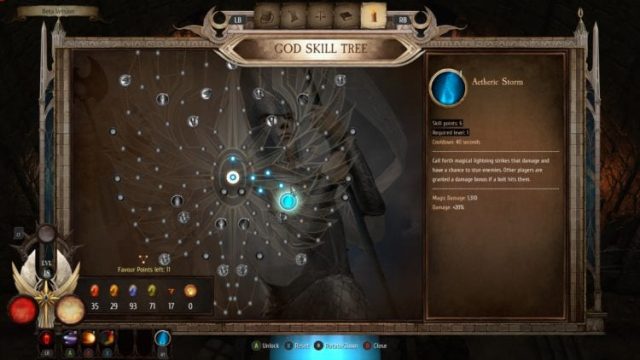 The Imperial Soldier for example, has 3 directions you can go: DPS, Tank or more of a hybrid between the two. Players will gain a total of 50 Favour Points, so they will not be able to max out this whole tree, generally forcing them to commit to one side or the other in order to gain some amazing Skills. You can reset your Favour Points but you will lose all of the Fragments you have spent, however, this isn’t such a huge deal because these can be farmed extremely quickly at end game, so don’t worry too much about losing them if you want to try something else.

Players will inevitably gain loot through out the game, and there are varying qualities, that mirror other Hack n’ Slashes. The better the quality, the more Stat Bonuses that the item will come with from a select pool for each type of item. These are randomized, so you might get the same weapon with different Stats. 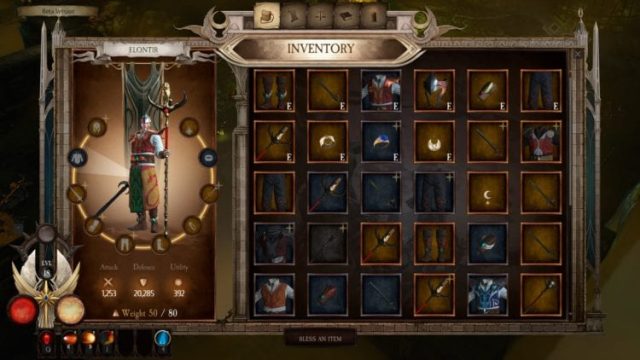 However, every single Armor piece is part of a set from the beginning of the game. These Sets are almost completely irrelevant though because their bonuses are negligible, and you are far better off just using the best of whatever you get until you hit end game, than trying to complete a set for a shitty +5% Health or +5% Damage bonus. This seemed like a lazy attempt to make things a bit more interesting, with very little effort.

The end game begins once the player completes the main story once, and they unlock Relic Hunting. Relic Hunting is much like Rifts from Diablo, and players will pay Gold Crowns to travel to randomly generated maps that contain hordes of enemies. These enemies drop the coveted “Legendary” loot that are part of Sets that actually have meaningful bonuses, and they also drop tons and tons of Fragments that you can use for God Skill Points as well as Blessing your Equipment. These Relic Hunts have negative modifiers that are randomly selected, and are applied to you only during that Hunt. 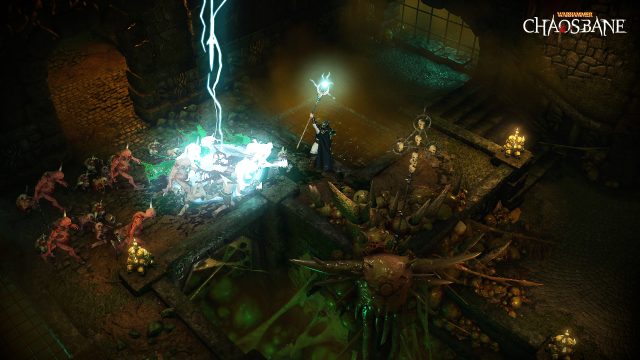 Players will run Relic Hunts over and over becoming more powerful with each because of Equipment upgrades, and more Fragments for God Skill Points. Players can then increase the Difficulty of the game for even better chances of loot while running these, rinse and repeat. This becomes particularly fun when playing with other players, and is probably one of the biggest selling points of the game.

In Chaosbane you can play multiplayer with up to 4 players on one system, including PC, or you can play online. This allows you to enjoy the game on your couch with friends, or meet others to play with. Loot is Class specific in Warhammer, so it doesn’t matter who picks it up, it will go to the appropriate Class. This helps make this aspect more enjoyable when playing with people you do not know. 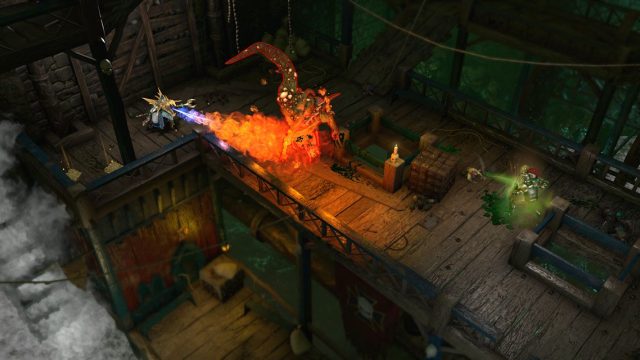 The soundtrack and audio effects of the game are actually pretty nice and all dialogue is voice acted. The voice acting isn’t amazing, but I’ve heard worse for lower budget games. The graphics of the game are not overly impressive for a game in 2019, however I had zero issues with frame drops playing at 1440p, and the game runs very smoothly. In addition, I had no crashes at all, and there were only a few mild bugs to speak of, which I was quite pleased with.

It’s been a very long time since a good Hack n’ Slash title was released, and most people in the genre are playing Path of Exile, Diablo 3 or Grim Dawn. After the extreme disappointment of Inquisitor-Martyr, I did not have super high expectations for Chaosbane, but I think it met them, if just barely. The loot system is about right, the Skills are interesting, there is room for different Builds, the Boss fights are fun, and you can play with up to 3 other players. These are all good things. 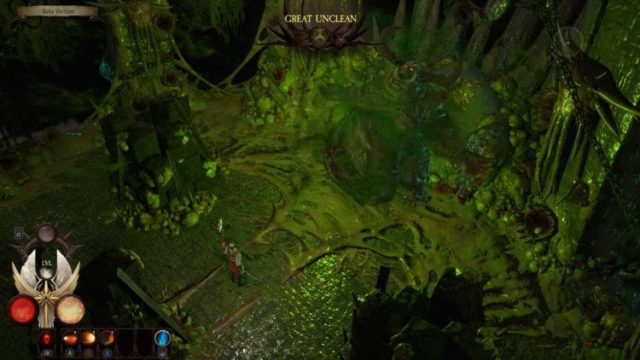 However, the game falls down in areas like level and enemy design. You see the same cookie cutter pieces of map over and over, and you can almost predict where to go, much like Bloodborne’s Chalice Dungeons. And the elite and mini-boss enemies are really the same ones re-skinned over and over again ad nauseam, lacking any interesting mechanics to speak of. Why keep playing if the enemies you fight are boring and the maps are uninteresting? The gameplay, while addicting and fun with others, is bogged down by a real lack of motivation to keep playing.

Warhammer Chaosbane releases on PC, Xbox One and PS4 on June 4th.

If you enjoyed reading this review be sure to check out more in Days Gone Review: A Saphire In The Rough and Sekiro Review: Shinobis Die Many Times.

6
Summary: Warhammer Chaosbane is a very middle of the road hack n' slash ARPG, with foundations of something greater. The combat is fun and addicting, and once you get to end game, things really pick up. It takes about 12-15 hours for one play through, and assuming you make it through the rather mundane campaign, you'll spend another 5-10 hours farming gear. 50 USD is a steep price for 20ish hours of gameplay, even for a Triple A title, which Chaosbane isn't even close to being. I fully expect this game to be much much better 6 months to a year down the road, and you can probably pick it up for a fraction of the cost. The only people I'd recommend this game to now, in it's current form, are those looking to spend a good bit of time Co Oping. Most of the complaints I have can be overlooked when playing with a friend or two. But if not, keep your eye on this game around the end of the year and definitely check it out then.
Story and Setting (6.5)
Gameplay (7)
Audio & Visual (7)
Replayability (7)
Pricepoint (4)