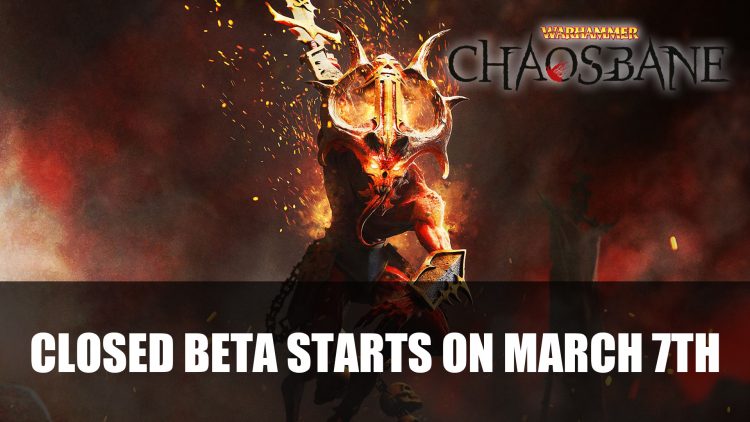 The developers Bigben Interactive behind the upcoming action-RPG Warhammer: Chaosbane has announced the closed beta dates.

The first phase for closed beta which is available to those who have pre-ordered Warhammer: Chaosbane, will be available from March 7th at 9am GMT until March 13th at 9am GMT for Playstation 4, Xbox One and PC via Steam. You will be able to experience the entire first act, try out two playable characters which includes The Soldier of the Empire and The High Elf Mage. You can also level abilities up to 20, experience co-op play as well as “many customization options” according to the developers. 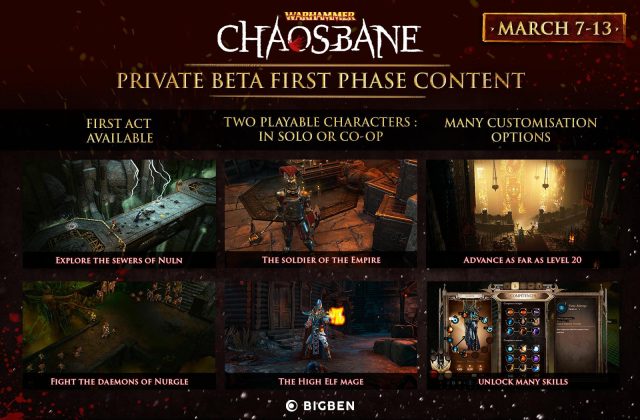 Whether you pre-ordered your copy digitally or by retail, you will be able to access the beta:

Those who ordered using the Xbox Store, Playstation Store, Steam or via the Warhammer Chasobane website will be able to see your game visible in your game library starting at March 6th at 9am GMT. If you have pre-ordered the PC version via the webite, you will be sent a code via email which you will need to use to unlock the beta and download it for Steam.

If you cannot see the Beta in your game library on Xbox One or Playstation 4, you can manually download it by the store’s website.

If you have purchased Warhammer: Chaosbane from a retailer store, you will be provided with a Private Beta access code but only from participating stores, or you will not be able to access the beta.

The Private Beta will be viewable from your game library for Xbox One, PS4 or Steam starting on March 6th at 9am GMT.

To see the list of participating retailers you can visit the link posted in the tweet below:

We know you’ve been asking where you can order a physical copy of Warhammer: Chaosbane.

It’s not the complete list (so check with your local retailers), but we’ve compiled an up to date (25/02/2019) list who will be selling the game. https://t.co/Hc2TyjGQKu pic.twitter.com/kVqvgFhHGn

If you want to know when the beta will go live for your time zone, you can use this handy world map posted by the devs that shows the preload availability as well as the dates/times for the closed beta:

You should already be able to start pre-downloading Chaosbane for the first Beta Phase.

If you have more questions about the beta, check the FAQ: https://t.co/vCmnrx0NPB pic.twitter.com/Xh29zwl1tO

There are three pre-order options available, each have their own perks depending on the edition you choose. See the bonuses you will gain below: 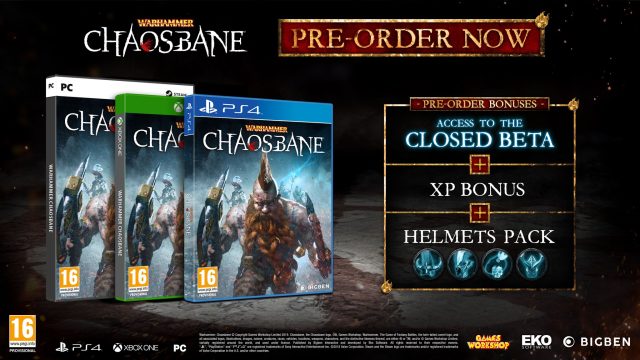 If you enjoyed this article be sure to check out the latest on Warhmmaer Chaosbane in Warhammer: Chaosbane Gets New Trailer Featuring Dwarf Slayer and Warhammer: Chaosbane Announced For PC And Consoles By Bigben Interactive. For a rundown of last weeks RPG news find it here in Top RPG News Of The Week: March 3rd (The Outer Worlds, Kingdom Hearts 3, Pokemon And More!).