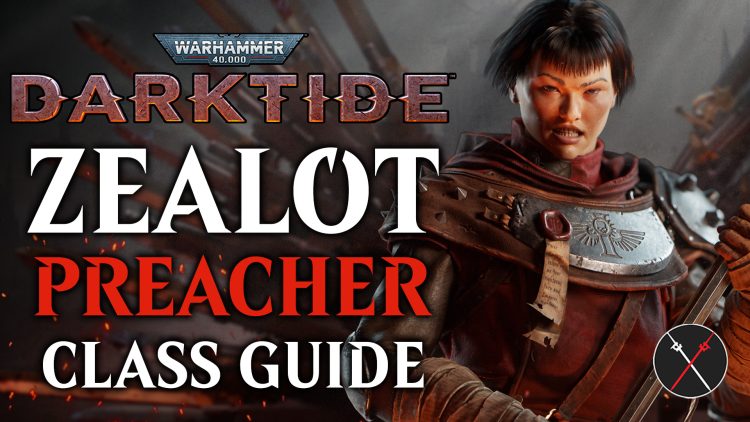 Warhammer 40K: Darktide Zealot Preacher Class Guide – In this Warhammer 40K: Darktide Class Guide, I’m going to share how to build your Zealot Preacher by discussing the Feats you should and shouldn’t take, the Weapons and Curios to choose, and tips on how to play this class effectively. If you’re itching to get into the middle of fights while dealing critical damage or would love torching the Emperor’s enemies with holy flames, then this guide is for you!

Similar to Ogryn Skullbreakers, Zealot Preachers thrive while in the middle of heavy melee fights, especially since their Swift Exorcism Feat grants them increased melee attack speed. Although they are not as sturdy, this class has access to instantly restoring Toughness and making up for their wounds. Furthermore, remaining in Coherency with them reduces the amount of Toughness damage taken so you’ll more or less survive longer even against the dreaded hordes. Zealot Preachers also take combat encounters to the extreme by going as far as shaking off death’s door upon taking fatal damage by gaining invincibility for a limited duration so they can continue fighting. And finally, in terms of crowd control, they have access to Stun Grenades, which are excellent in temporarily disabling a large number of foes for a few crucial seconds. 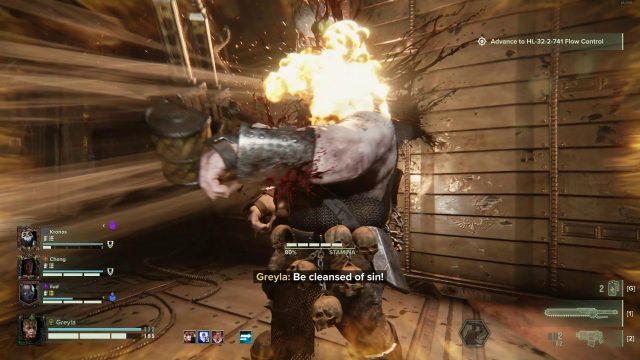 What makes the Zealot Preacher deadly is their ability to execute guaranteed critical hits thanks to Chastise the Wicked. This also allows you to charge toward a target while instantly replenishing half of your Toughness. In case you move too far away, or if things look too dangerous to rush in, you can cancel this Class Ability by performing a block even after the charge animation has begun. As a rule of thumb, it’s best to either block or rev up a heavy attack before using Chastise the Wicked depending on whether you want a more defensive or offensive approach against enemies.

All classes in Darktide have corresponding Feats to choose from starting at Level 5 until Level 30. For this Zealot Preacher Build, you’ll be focusing on crit as a primary way to deal damage so it’s best to select the following:

First is Faith Restored, which is the best Feat compared to the others. This provides the Zealot Preacher with Toughness damage reduction when they perform a melee critical hit. As such, it’s instantly activated from Chastise the Wicked’s guaranteed critical hit and is a highly necessary Feat since you’re often going to be in the thick of combat. Meanwhile, Enemies Within, Enemies Without’s Toughness replenishment is too low to justify taking it whereas Purify in Blood pales in comparison to Faith Restored’s amazing synergy with critical hits.

Next, you’ll want to take Bloodletting as it makes your melee crits better by inflicting the bleed status effect. And in return when an enemy is bleeding, say an elite, your succeeding attacks are likely to critically hit them. The more crits you perform, the better the uptime of Faith Restored for a consistent Toughness damage reduction. Because of this, I wouldn’t pick Punishment or Retribution in order to focus on inflicting bleed and boosting your crit chances against targets. 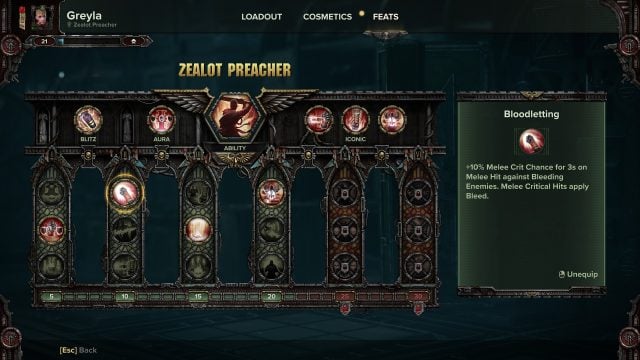 Third is Benediction, which is hands-down the best Feat in this tier for the Zealot Preacher since it provides Toughness damage reduction to all allies in Coherency on top of The Emperor’s Will Aura. And then paired with Faith Restored, you’re looking at a huge reduction in overall Toughness damage received! Talk about survivability as long as you don’t take chip damage. I’m opting for Benediction instead of Holy Fervor since the latter Feat’s effects only get triggered when the class gains Martyrdom, or when health is lost. At the moment, Martyrdom is not designed well since you get a flat damage number increase as opposed to a percentage, therefore, the damage boost is insignificant, especially at higher levels.

Fourth is Holy Revenant, which causes the Zealot Preacher’s Until Death Iconic Feat to become stronger. What happens here is that all damage dealt during Until Death’s invincibility window will restore a significant portion of the class’s health back. Melee strikes, in particular, will bring in more health so it’s best to get back into the fray despite the dangers of death. Alternatively, you can go for Thy Will be Swift if you’re not constantly about to die since you won’t be activating Until Death anyway. I haven’t considered Faith Restores All because its restorative effects are too small at the risk of taking damage. 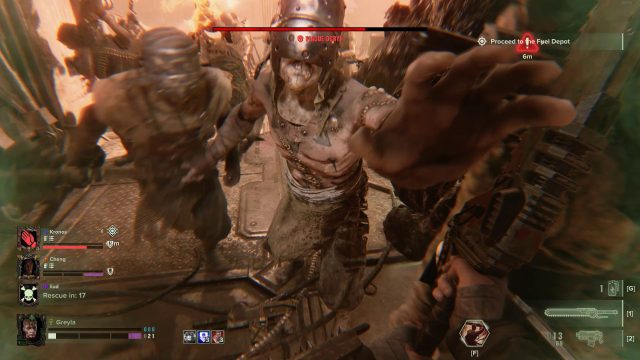 At Levels 25 and 30, the ideal Feats to select for this crit build are Rising Conviction (or Emperor’s Executioner) and Invocation of Death. You should choose Rising Conviction if you prefer to enhance your already formidable melee prowess. This grants a stacking buff that increases the damage dealt for every melee strike you perform. Ultimately, it’s best paired with weapons that you’re able to attack quickly with.

Another option is Emperor’s Executioner if you wish to make use of the Zealot Preacher’s exclusive weapon, the Purgation Flamer. This increases your ranged damage based on how close you are to your targets, and as such, will make you increasingly dangerous and effective at taking out hordes. However, do not pick this Feat if you plan on using the Boltgun since its focus is not against nearby foes. 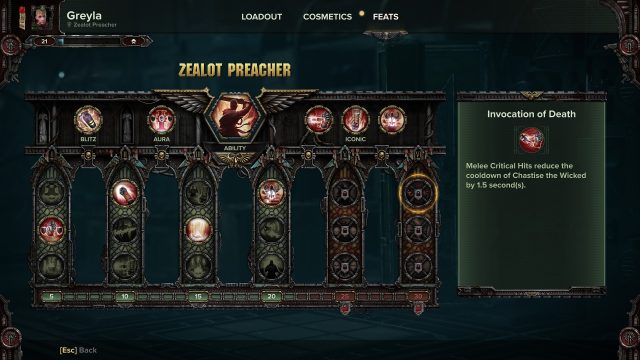 Last but not least is the Invocation of Death as it synergizes extremely well with the rest of your critical-focused Feats. All of your melee critical hits reduce Chastise the Wicked’s cooldown, allowing you to make use of this powerful ability more frequently. In fact, you’ll trigger crits even more because Chastise’s hit is always a guaranteed critical.

When it comes to the weapons, the best choices for this Zealot Preacher Crit Build are the Heavy Eviscerator or Tactical Axe and Boltgun. The Heavy Eviscerator is an excellent melee weapon because it can effectively deal damage against Flak and Carapace Armored enemies while affecting a number of them thanks to the Cleave Targets Stat. Another option is to go for the Tactical Axe with increased Finesse and Critical Bonus. These stats synergize with one another in terms of your enhanced attack speed and critical damage dealt. 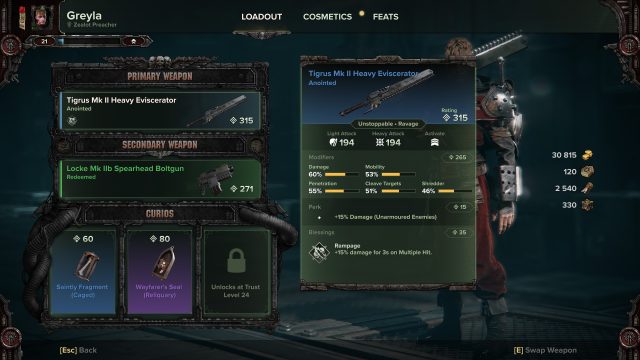 Next is the Boltgun, which is an extremely efficient option when aiming down sights to take out elites due to its heavy damage. The great thing about this ranged weapon is it also allows you to take out clumps of enemies because firing from the hip goes full auto. And because of Boltgun’s Stopping Power, you are able to stagger the ones who have survived your initial shots. It does have its disadvantages though. For instance, the preparation time and reload speeds are both low so choosing one with a Reload Speed Perk will considerably help. Additionally, getting hit while wielding this weapon causes your aim to be misaligned quite frequently so you’ll need to dodge out of the way to regain your balance. 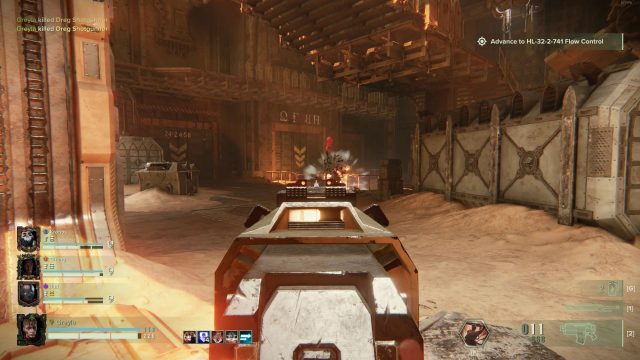 In terms of curios, you’ll need to fill up 3 slots. For the Zealot Preacher, I prefer equipping curios that’ll improve Max Health and Toughness for improved survivability. For perks, you should prioritize further boosting your health and improving damage resistance against ranged enemies. If you can, then wearing a curio that’ll provide you with additional Wounds would also be beneficial so you won’t die quickly when you’re corrupted. 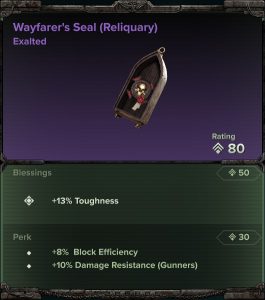 Zealot Preachers are experts when it comes to charging into the thick of combat and attacking enemies in the melee range to proc Bloodletting. While you have a lot of ways to restore Toughness, you should still make it a point to not get hit. So remember to perform block-shove moves or block-dodge often when surrounded by enemies. Additionally, constantly staying near allies will improve their survivability due to the damage reduction on Toughness. 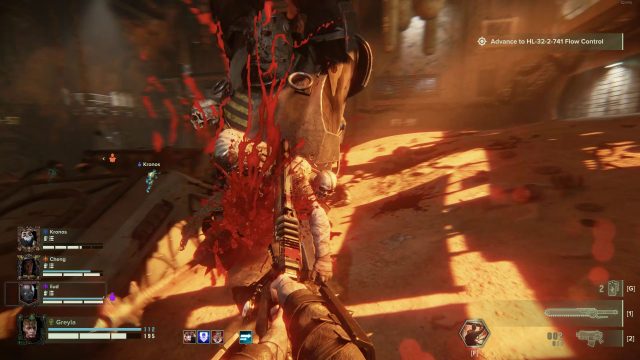 Before activating Chastise the Wicked, you should consider triggering the Special Action of your Eviscerator to prepare to annihilate targets in one swing. Just like the Ogryn Skullbreaker’s Bull Rush Class Ability, you can trigger Chastise the Wicked to charge out of danger as needed, and since it instantly restores half of your Toughness, so there’s literally no downside.

Lastly, if you’re not too keen on shooting down elites from a distance, then you may wish to equip the Purgation Flamer. The focus here is to take out larger hordes of weaker enemies and it’s definitely ideal for controlling the battlefield by forcing them to run through burning chokepoints. Because of this, the build will be more melee-focused.

Stay tuned for more Warhammer 40K: Darktide Class Guides and be sure to drop by our Twitch Channel if you have questions about the game! You can also check out our Psyker Psykinetic Class Guide, Veteran Sharpshooter Class Guide, Ogryn Skullbreaker Class Guide, Darktide Review, Darktide: What Is The Best Class For You? Guide, and Darktide: Beginner Guide.