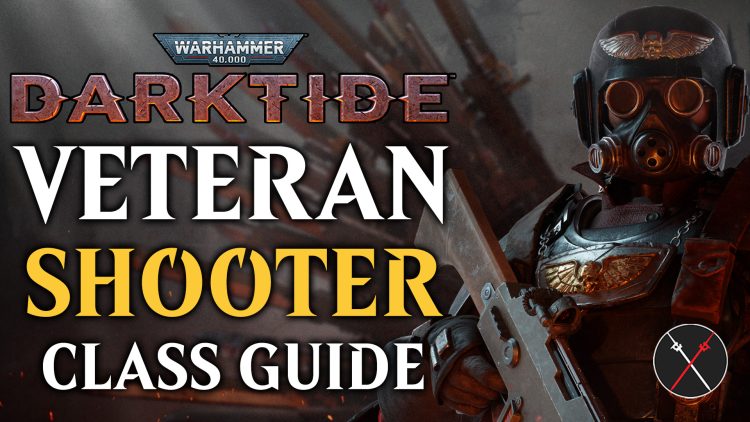 Warhammer 40K: Darktide Veteran Sharpshooter Class Guide – In this Warhammer 40K: Darktide Class Guide, I’m going to share how to build your Veteran Sharpshooter by discussing the Feats you should and shouldn’t take, the Weapons and Curios to choose, and tips on how to play this class effectively. If you want to be an expert precision shooter and demolish enemies up close and personal, then this guide is for you!

The Veteran Sharpshooter is an amazing class to play if you wish to focus on dealing damage from afar. Doing so goes hand-in-hand with their Be Prepared and Scavenger Feats, allowing them and their teammates to gain some ammo. What’s more, is that they benefit from improved Weak Spot Damage, making it easier to shoot down enemies. One thing to note for this build is you’re not limited to staying behind allies all the time since you’re also capable of slaughtering hordes effectively thanks to the melee weapons available to you. To help perform your duties against clusters of them, you’ll be utilizing Frag Grenades that explode and deal AoE damage. 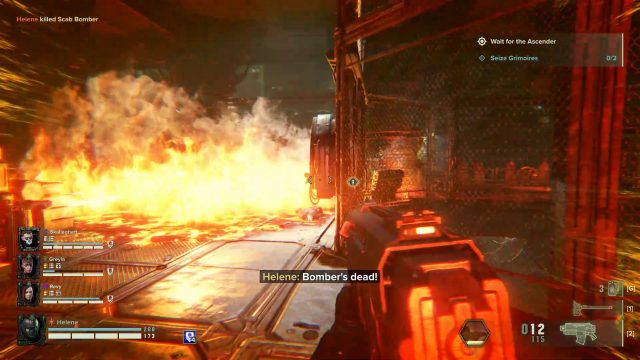 What makes the Veteran Sharpshooter lethal is their Volley Fire Class Ability. Not only do they instantly assume the ranged stance, letting them quickly switch to their ranged weapon, but they also gain a considerable ranged damage boost. This together with the fact that they’re able to spot and zoom in on high-priority targets such as specials and elites, makes them a formidable and deadly opponent to go up against. More often than not, Veteran Sharpshooters are capable of killing targets efficiently no matter the range.

All classes in Darktide have corresponding Feats to choose from starting at Level 5 until Level 30. For this Veteran Sharpshooter Precision Build, you’ll be better off selecting the following:

First is Exhilarating Takedown, which restores a portion of your Toughness upon killing enemies by targeting their weak spots. This is enhanced thanks to your Make Every Shot Count Iconic Feat as the latter boosts all damage dealt against weak spots. I won’t take Confirmed Kill because it’s too dependent on killing elites to restore Toughness whereas At Arm’s Length will push you to stay away from enemies. It’s not viable for the build given that you’ll also be a strong contender at point-blank range. 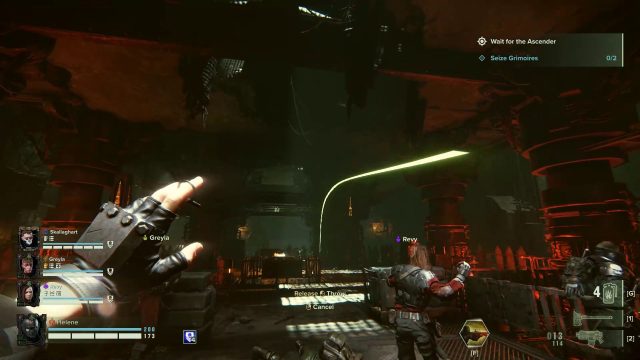 Second is Demolition Stockpile, which is an amazing Feat because it generates 1 Frag Grenade every 60 seconds, granted that this has already received a nerf from the initial 45 seconds. Since you’re going to perform melee kills, you’re better off throwing one grenade after the other first to whittle them down as much as possible before engaging with the remaining enemies. Another option here is Tactical Reload, especially if you’re wielding a Boltgun that has one of the slowest Reload Speeds in the game. But should you get used to it and happen to pick up one that has a Reload Speed bonus, then I highly suggest sticking with Demolition Stockpile because you won’t be fully reliant on scrounging for grenades like your allies. And finally, Sniper isn’t a contender here for the same reason that At Arm’s Length isn’t chosen.

Third is Bio-Optic Targeting, which I think is a no-brainer choice. What it does is that every time Volley Fire is triggered, priority targets are no longer limited to your POV, they can all be seen by your allies in Coherency as well. This is very important in eliminating specials and elites faster as opposed to only relying on Veteran Sharpshooters to do so. You won’t really need Demolition Team anymore, especially if you go for Demolition Stockpile at Level 10, and given its low grenade replenishment rate, it’s just not worth it. 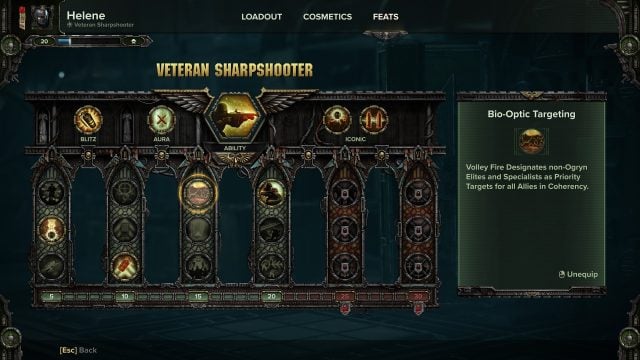 Fourth is Unwavering Focus, which provides the best value compared to the other Feats in this level. Every time Volley Fire is triggered, you gain more than 50% Toughness damage reduction against any form of ranged attack. This is huge, especially against Snipers who effortlessly reduce the target’s Toughness to 0 on hit. Camo Expert isn’t a viable option in which you’ll be made to stand still so that you may blend in with the environment, thereby, reducing the chances of getting attacked. Not only will you be less mobile, but you also won’t be that helpful to your teammates. Additionally, Duck and Dive isn’t something I would recommend either since you won’t need the extra Stamina boost given that it replenishes quickly anyway.

At Levels 25 and 30, the best Feats to select for this precision build are Deadshot (or Frag Storm) and Sustained Fire. Deadshot is extremely powerful in that you gain an increased chance to crit and improve the stability of your ranged weapon when using Aim Down Sights (ADS). These are good tradeoffs for losing Stamina, which gets restored pretty quickly anyway. Alternatively, you can choose the Frag Storm Feat to apply bleed stacks on all hit enemies. This is also potent with or without Demolition Team and if you wish to add bleeding to your build. 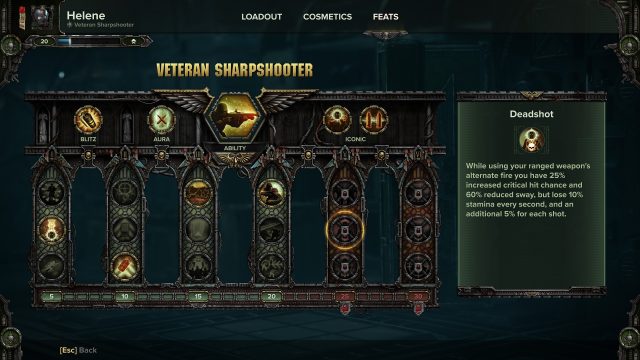 Last but not least is Sustained Fire, which among the other Feats, provides the best value. Not only will you automatically reload your weapon upon triggering Volley Fire but you also get to replenish more than 50% of your Toughness. What’s more, is that every time you kill a high-value priority target, you can keep activating Volley Fire without needing to wait for its cooldown!

When it comes to the weapons, the best choices for this Veteran Sharpshooter Precision Build are the Power Sword or Combat Axe and Boltgun. The Power Sword is an almighty weapon to behold because it deals amazing Cleave Damage, and coupled with Finesse, your attack speed is enhanced. As such, you can slice through multiple opponents by swiftly chaining light attacks. This becomes all the more effective when you activate the Power Sword’s Special Action, thereby imbuing the weapon with energy. To amplify the amount of carnage you do, it’s best to go for the increased melee damage perk. 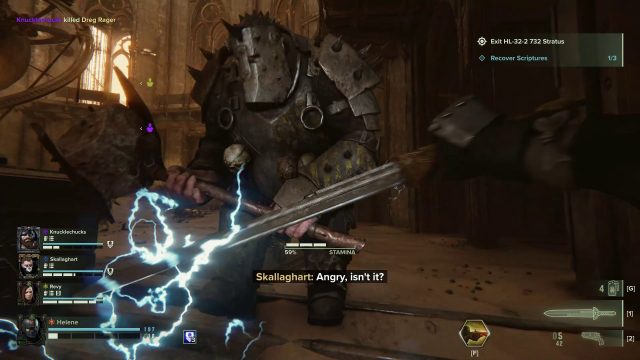 Another melee weapon that I’ve enjoyed using because of its improved attack and movement speed is the Combat Axe. This just destroys Flak and Carapaced Armored foes because of its decent Penetration and First Target Stats. It’s also effective at blocking attacks to continue keeping your Toughness up.

Next is the Boltgun, which is my favorite weapon in the game even though it’s has its drawbacks. For starters, the weapon switch time is terrible as it takes a few seconds worth of preparation. Then there’s the long reload time and finally, the sway after shooting. The sway can be offset by rolling for a Boltgun that has higher Stability and you can go for perks, which provide Reload Speed bonuses. What I would recommend with the weapon switch time is to capitalize on Volley Fire more often in order to make it almost instant. Once you get used to this Boltgun, you’ll not only deal high power damage against Armored enemies and elites, but you’ll also stagger them in the process. The benefits definitely outweigh the disadvantages, making this weapon a must-have! 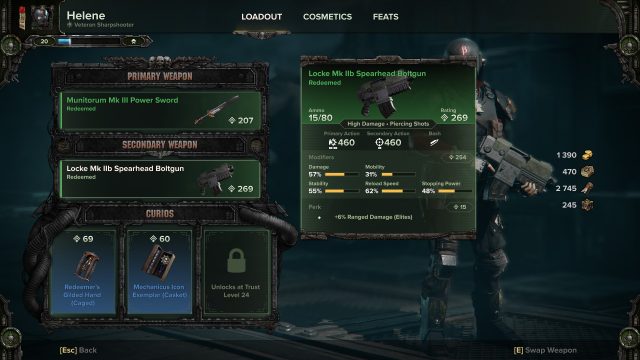 In terms of curios, you’ll need to fill up 3 slots. For the Veteran Sharpshooter, I prefer equipping curios that’ll improve Max Health and Wounds, the latter of which will help you survive longer if you’re corrupted. For perks, you can never go wrong with more health, Toughness recovery speed, and damage resistance against Snipers, Flamers, and Gunners. 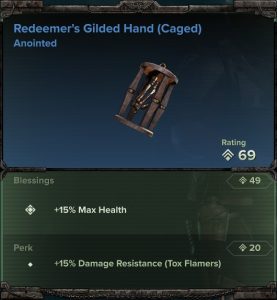 Veteran Sharpshooters are skilled no matter where they are on the battlefield. They can destroy enemies up close using numerous explosive grenades and then jump in for the kill with their destructive Power Sword or Combat Axe. Speaking of engaging them in the melee range, remember to charge the Power Sword first before rushing in and striking your targets, prior to dodging. The cycle will continue when you charge forward once again. Doing so will maximize the damage you deal with this weapon and ensure that you efficiently slay whatever target is left standing. 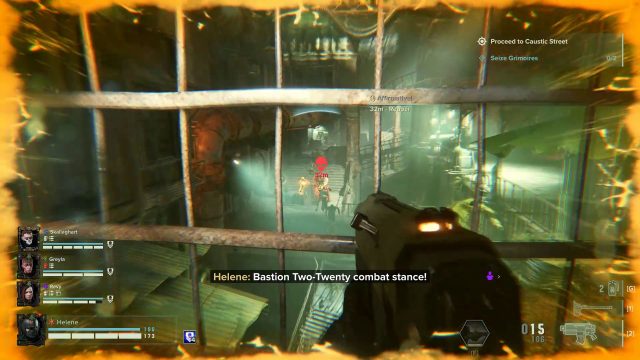 Even if you spend about 50% in the melee range, you’ll ideally want to stay at the back of the pack when entering new areas to scour them properly. It’s best to activate Volley Fire as fast and as often as you can because you’re going to play a huge role when it comes to eliminating high-value targets that will destroy you and your allies. Going after Snipers, Poxbursters, and Flamers should be a priority since they can easily reduce anyone’s Toughness to 0. It’ll then get easier upon reaching Level 30 once you unlock Sustained Fire.

Lastly, should you find the Boltgun cumbersome, you’re better off using the Stub Revolver even if it has low ammo. This weapon’s switch time and Reload Speeds are much faster, plus, you can eliminate enemies quickly because of its high Penetration and Critical Bonus Stats. 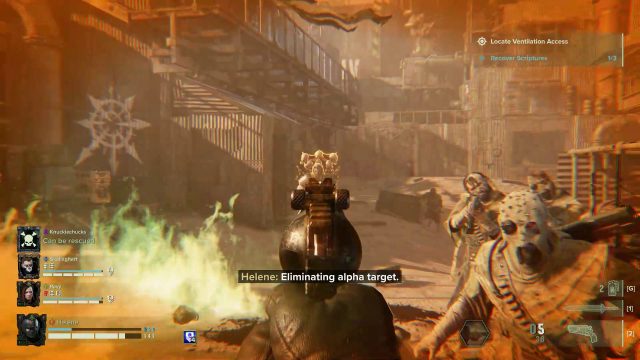 Stay tuned for more Warhammer 40K: Darktide Class Guides and be sure to drop by our Twitch Channel if you have questions about the game! You can also check out our Psyker Psykinetic Class Guide, Zealot Preacher Class Guide, Ogryn Skullbreaker Class Guide, Darktide Review, Darktide: What Is The Best Class For You? Guide, and Darktide: Beginner Guide.