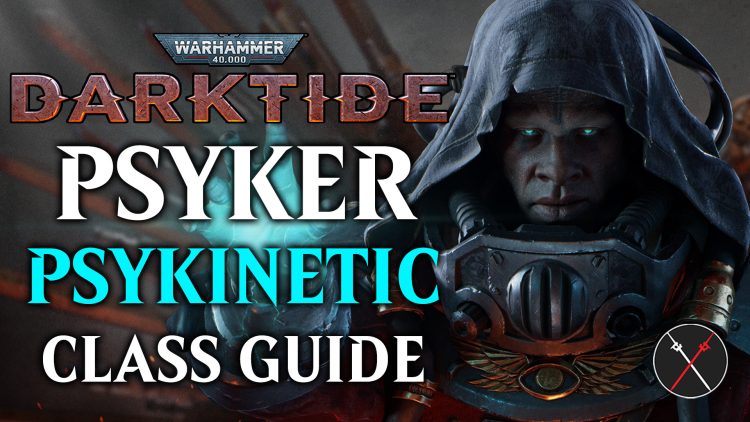 The Psyker Psykinetic is one of the most burst-heavy classes available in Darktide. They’re particularly efficient when it comes to taking out specials and elites, even those donning Carapace Armor, using their Brain Burst Ability. Rather than throwing grenades like the others, Brain Burst takes up the Psyker Psykinetic’s grenade slot. It does, however, take practice to get used to because the ability has a cast time that will leave the class quite vulnerable in the process. Brain Burst also grants Warp Charges, which slightly increase all damage dealt. This can be accumulated multiple times and lasts for about 25 seconds, making it possible to constantly maintain the buff’s uptime. 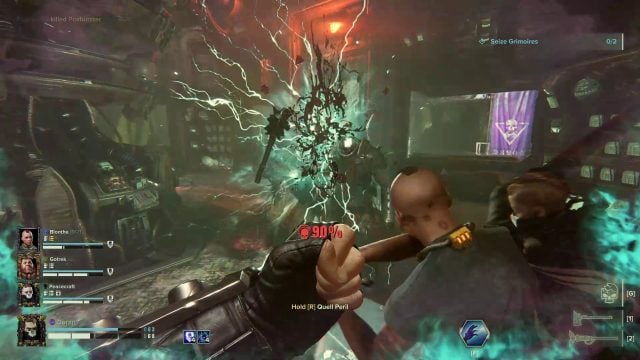 To spice things up, you’re going to have to quell the Peril of the Warp gained by casting psychic powers. Filling up this gauge will cause your character’s head to explode, instantly downing themselves. It’s worth noting that Peril naturally degrades over time, albeit slowly, but can be forced by hitting the reload key. Additionally, Psyker Psykinetics have a more effective way of lowering Peril, and this is through their Psykinetic’s Wrath Class Ability. Not only will it be reduced by half but they’ll also be able to push enemies away from them, making it especially useful against overwhelming hordes.

Unlike the other classes, Psyker Psykinetics have access to Force Staves, which are great for crowd control. These weapons do not require ammunition, therefore, allies can take all the ammo drops for themselves. Lastly, sticking close to these Warp manipulators often grants a slight damage bonus against elites. 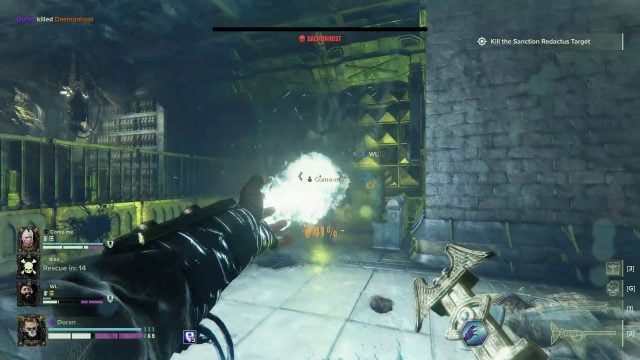 All classes in Darktide have corresponding Feats to choose from starting at Level 5 until Level 30. For this Psyker Psykinetic Brain Burst Build, you’ll be focusing on popping heads most of the time as a primary way to deal damage so it’s best to select the following:

First is Warp Absorption, which compared to the other Level 5 Feats to recover Toughness, is the best choice. This synergizes really well with how you kill regular enemies and elites using psychic power abilities or Warp attacks. You might be wondering, however, why I didn’t choose Essence Harvest. Although it may seem enticing at first due to its larger Toughness regeneration, the only way to trigger this is to gain Warp Charges. Even if we’re going for a Brain Burst Build, having the option to use the Force Staff and Sword as other means to eliminate enemies is going to be better in the long run than solely relying on popping heads to recover Toughness. After all, this is the squishiest class so you’ll want to capitalize on every type of damage you deal. Quietude, on the other hand, restores too little Toughness so this isn’t viable. 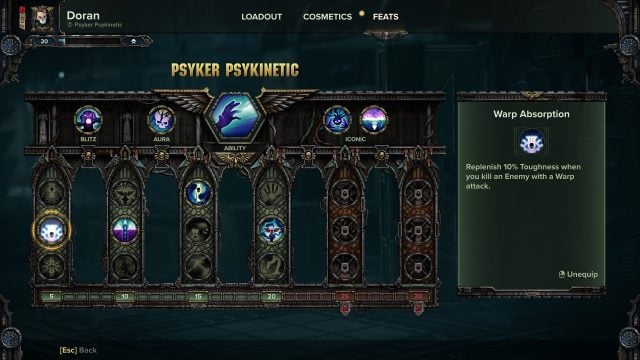 Second is Inner Tranquility, which is chosen solely for the fact that Peril will accumulate much slower for every Warp Charge the Psyker Psykinetic has. Less Peril generated means you can cast Brain Burst and other Force Staff abilities much more often. This synergizes primarily with other Feats you’ll have access to later. Another good option to take is Wrack and Ruin because it causes large damage over time in the form of Soulblaze, to be applied to enemies around a target killed by Brain Burst. You can think of this as the standard bleed that you would otherwise have inflicted with the other classes. Meanwhile, I wouldn’t take Psykinetic’s Wrath for the reason that it relies on dealing Force Weapon attacks, which this build won’t often do anyway.

Third is Psychic Communion, which significantly helps gain and maintain Warp Charges much quicker. Instead of relying solely on Brain Burst, all enemy kills will have a small chance of giving you a charge whether the target has been killed by you or an ally in Coherency. What’s more is you generate less Peril, keeping you out of the Warp’s clutches more often than not. At higher difficulties with a greater number of elites, you might want to consider Cerebral Lacerations if you have no issues preserving Warp Charges. As long as you deal damage against an enemy using Brain Burst, your allies gain a damage boost and can therefore jump in for the kill. Meanwhile, Psykinetic’s Aura doesn’t add value to this build. You’re better off concentrating on your powers than having to worry about the class abilities of your allies. 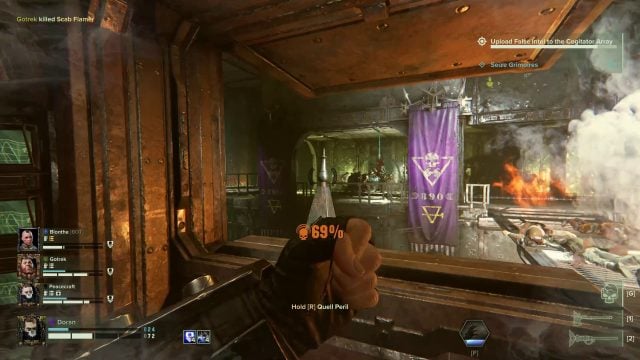 Fourth is Kinetic Shield, which will further reduce Toughness damage taken from ranged attacks based on the number of Warp Charges you currently have. Since you have additional sources to generate charges, maintaining bigger stacks and, therefore, a greater amount of Toughness damage reduction, is very feasible. It’s also a good way to protect you from constantly being downed. Now another decent option would be Mind in Motion. This Feat allows the Psyker Psykinetic to move unhindered while channeling their Peril reduction. This essentially makes it so that you’re less of a sitting duck in an already awful situation.

At Levels 25 and 30, the ideal Feats to select for this Brain Burst Build are Warp Battery (or Kinetic Overload) and Kinetic Barrage. Warp Battery has tons of synergy, especially with Inner Tranquility, Psychic Communion, and Kinetic Shield. This boosts the maximum number of Warp Charges you can accumulate from 4 to 6, a 50% increase! As such, you’re able to inflict more carnage, accumulate Peril at a slower rate, and reduce the Toughness damage taken from ranged enemies. But do remember that if you don’t maintain the Warp Charges properly, all stacks will be gone after 25 seconds. With this in mind, you might want to consider taking Kinetic Overload instead, especially if you struggle with maintaining 4 Warp Charges, let alone 6. This will make it so that any excess charges earned would instead cast Soulblaze on enemies. Plus, the Feat works well with Wrack and Ruin. 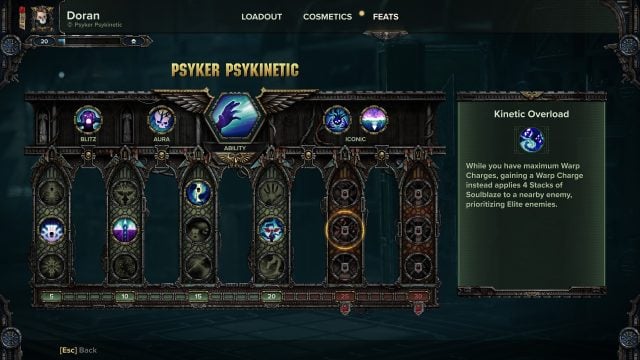 Last but not least is Kinetic Barrage, which makes Brain Burst a much better Feat. After using the Psykinetic’s Wrath Class Ability, Brain Burst generates even less Peril and casts much faster! This syncs well with your large pool of Warp Charges, allowing you to deal greater damage while slowing down the accumulation of Peril.

When it comes to the weapons, the best choices for this Psyker Psykinetic Brain Burst Build are the Purgatus Force Staff and Blaze Force Sword or Combat Axe. The Purgatus Force Staff is very powerful because it complements this class well, specifically due to the Damage and Burn Rate Stats. As such, you’re able to set enemies on fire to deal damage over time and stagger them in the process while reducing the Peril you incur, making this weapon highly effective against hordes and elites. Just remember to charge it first to amplify the damage. 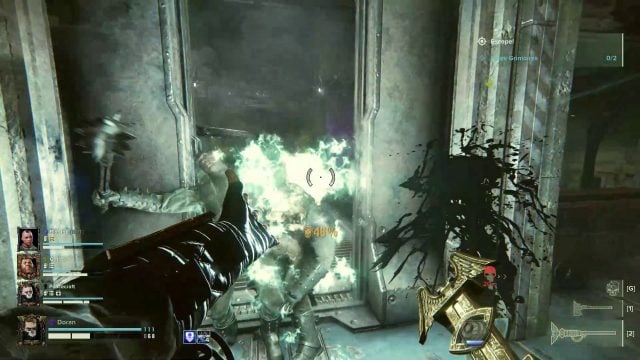 Next is the Blaze Force Sword, which allows you to quell Peril. What’s especially great about this melee weapon is you can power it up using the Warp, plus, it grants movement and attack speed buffs, letting you effectively dance with and slice enemies in your favor while dealing the most significant damage against the First Target. Alternatively, you can go for a Combat Axe that either provides you with decent Cleave Targets or higher Finesse depending on what you intend to specialize in. Will it be attacking more enemies in a single swing or boosting your overall attack speed? Either way, the Combat Axe is a killer weapon because it effectively pierces through armor. 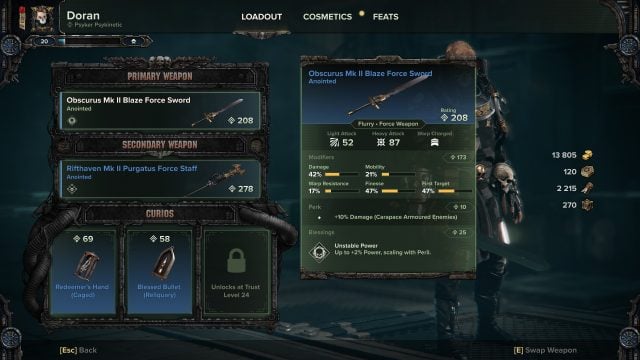 In terms of curios, you’ll need to fill up 3 slots. For the Psyker Psykinetic, I prefer equipping curios that’ll significantly boost Max Health and Toughness because this is the squishiest class in the game. For perks, further improving Max Health with Toughness recovery speed and enhancing damage resistance against Snipers and Flamers, or any enemy type that gives you the most headaches, will help you survive longer in combat. 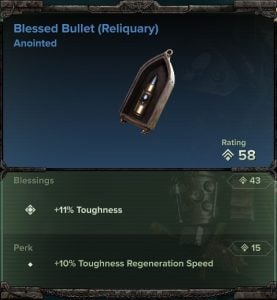 Psyker Psykinetics is one of the more advanced classes in Darktide due to its high-risk, high-reward playstyle. Not only will you have to maintain Warp Charges all the time, but you also have to manage Perils of the Warp, otherwise, you’ll go insane and be downed. This is easier said than done as frantic firefights can otherwise steer your attention away from this resource. But should you master these two mechanics, you’ll have a blast popping one head after the next. 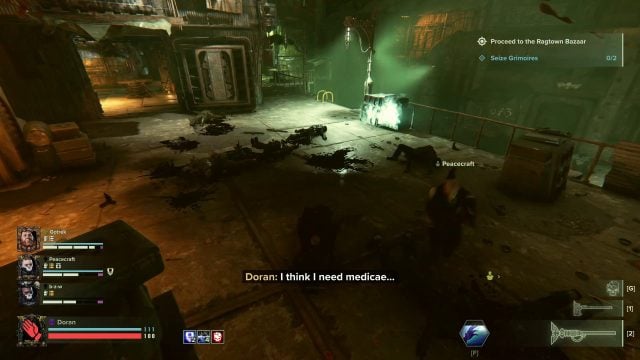 To effectively maintain Warp Charges, remember to target enemies (even fodder targets) that are far away from your team when you’re about to engage. Once they run toward you, you can switch to either the Purgatus Force Staff to burn them down or the Blaze Force Sword to hack them into several pieces. Furthermore, when you’re quelling Peril, be sure to swap to your Force Staff since they have the dedicated Quell Speed Stat. Doing so will make it faster to lower your Peril as opposed to using your bare hands.

Lastly, if you’re looking for another good ranged weapon, I highly recommend the Surge Force Staff because, unlike the Purgatus Force Staff, you can electrocute and momentarily stun enemies. With this playstyle, you can then charge in with your Blaze Force Sword or Combat Axe for the kill. The Surge Force Staff also deals critical damage. 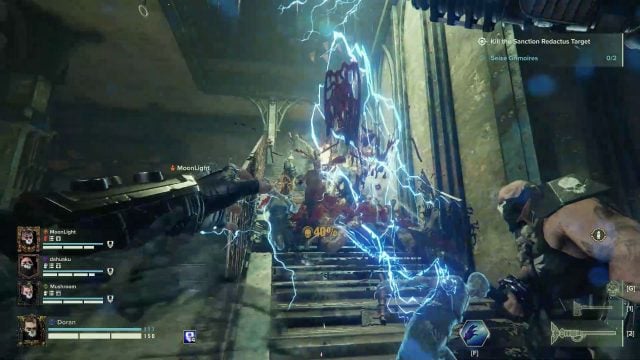 That’s it for the Warhammer 40K: Darktide Class Guides. Be sure to drop by our Twitch Channel if you have questions about the game! You can also check out our Veteran Sharpshooter Class Guide, Zealot Preacher Class Guide, Ogryn Skullbreaker Class Guide, Darktide Review, Darktide: What Is The Best Class For You? Guide, and Darktide: Beginner Guide.