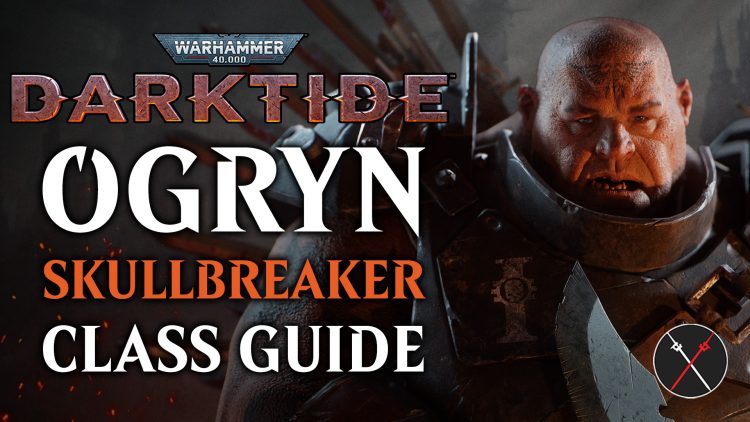 Warhammer 40K: Darktide Ogryn Skullbreaker Class Guide – In this Warhammer 40K: Darktide Class Guide, I’m going to share how to build your Ogryn Skullbreaker by discussing the Feats you should and shouldn’t take, the Weapons and Curios to choose, and tips on how to play this class effectively. If you’re searching for a sustainable support tank build that demolishes hordes and knocks elites off the board, then this guide is for you!

Ogryn Skullbreakers are known for taking advantage of their giant stature to soak up a ton of damage on behalf of their allies and effectively staggering targets in the melee range. Thanks to their Thick Skin, the Toughness and Health damage they take are considerably reduced. This, and the fact that they can’t be interrupted, makes them extremely reliable in terms of rescuing downed teammates, especially when surrounded by weaker enemies. Unlike the other classes, their grenades seemingly don’t do much at first glance because it doesn’t detonate unless you pick a specific Feat. Instead, the Big Box of Hurt, as what these grenades are referred to, is potent against elites by knocking them down while dealing significant damage. Just don’t throw this against hordes, otherwise, you’ll end up wasting it since you only have a maximum of 2 charges. 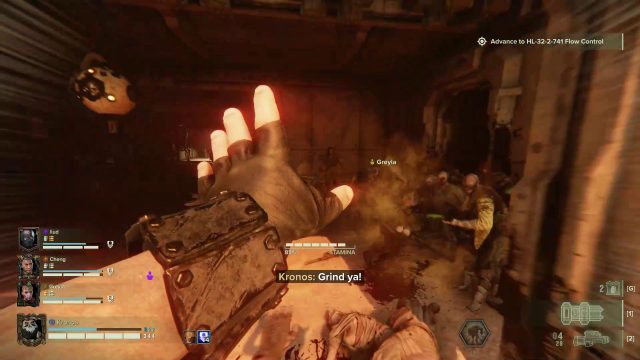 Aside from being an effective tank, Ogryn Skullbreakers are skilled at crowd control, largely due to their Bull Rush Class Ability. Although it doesn’t deal damage, you do charge forward and trample down hordes and specials, thereby giving your allies space to clear them out. You can then utilize the temporary attack and movement speed buff to turn around and whack them with your Battle Maul & Slab Shield. Bull Rush is also useful if you need to safely get out of sticky situations or rescue downed allies who are far away.

All classes in Darktide have corresponding Feats to choose from starting at Level 5 until Level 30. For this Ogryn Skullbreaker Tank Build, you’ll be better off selecting the following:

First is Lynchpin as a way to easily replenish the Toughness of your allies. The idea here is to double the amount of Toughness they gain back when Coherency is maintained. Oftentimes, however, and depending on the group, team members have a tendency to disband for various reasons so at the start, the Ogryn Skullbreaker will need to actively stick with them. Later on, you’ll be getting a Feat that will increase your Coherency radius, making this a walk in the park. For this build, I wouldn’t opt for Smash ‘Em Good! or Best Form of Defence simply because a single heavy melee hit takes too long to prepare. Blocking and shoving targets beforehand isn’t enough since there continues to be a slew of enemies coming at you, and they recover pretty quickly. Therefore, this increases the chances of getting overwhelmed, especially at higher difficulties. 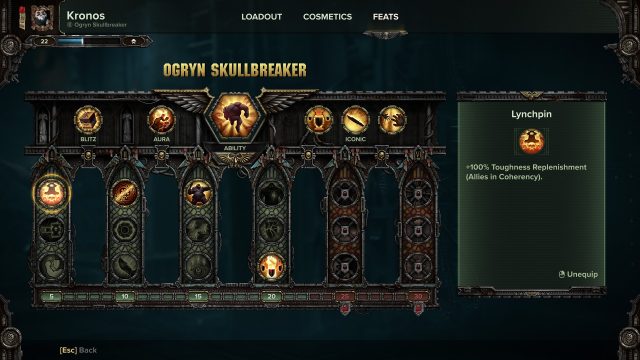 Second is Heavyweight, which is very effective when it comes to dealing with Unyielding enemies such as Bulwarks and Reapers. Not only will the Ogryn Skullbreaker’s melee damage significantly increase by half but the damage they take from these monsters decreases by the same amount as well. As a tank, you’ll need to be ready for anything so you’ll need to withstand the attacks dealt by larger enemies in order to improve the survivability of your team. Heavyweight is a potent Feat that’ll allow you to go toe-to-toe against these hulking figures. I wouldn’t choose Blood & Thunder for the same reason that heavy melee hits won’t be often utilized for this build due to how slow they are whereas Bombs Away! doesn’t add much value to the already painful Big Box of Hurt, which deals adequate damage and knocks down elites. 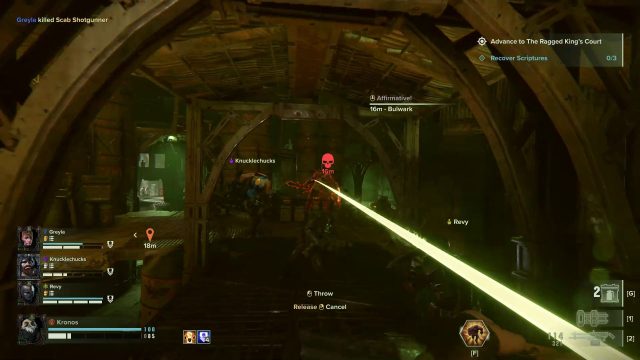 Third is Towering Presence, which synergizes really well with Lynchpin and Intimidating Presence. This is the Feat that improves your Coherency radius so you won’t have to stay too close to your allies all the time. Intimidating Presence, on the other hand, is useful for teammates who often engage with heavy melee attacks as their respective damage is amplified. An alternative to Towering Presence if you more or less already have a well-coordinated team is Bullfighter. Every time an elite is killed by you or any ally in Coherency, Bull Rush’s cooldown is reduced, allowing you to mow down enemies more frequently.

Fourth is Die Hard, which improves Toughness replenishment when you only have little health left, specifically 25%. This will work wonders in keeping you alive in absorbing damage on behalf of your team. As long as you don’t accumulate bleeding, you’re more or less safe from being downed. Bloodthirst is not a viable option because we didn’t select Blood & Thunder, which would have added a Bleed Stack for every heavy melee hit. Meanwhile, Hard as Nails is too random and unpredictable (even when allies get knocked down by the hound) to leave the Ogryn Skullbreaker’s fate in the unfortunate hands of their team. 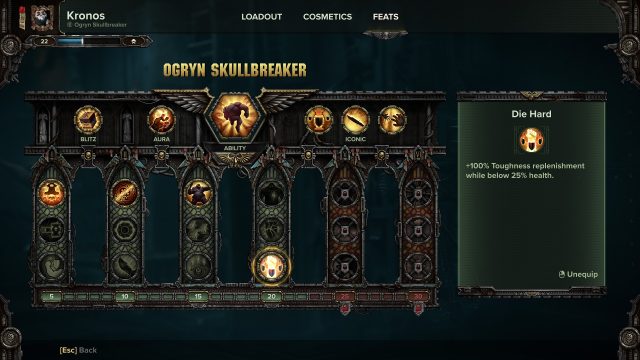 At Levels 25 and 30, the best Feats to choose for this tank build are Payback Time and Unstoppable. Payback Time essentially allows you to deal more damage against the same types of foes who attack you. As such, this comes in handy against the elites I’ve mentioned under Heavyweight, who will retaliate once you beat them with your Battle Maul. And last but not least is Unstoppable, which effectively doubles the distance you travel with Bull Rush while making knockbacks more effective.

When it comes to the weapons, the best choices for this Ogryn Skullbreaker Tank Build are the Battle Maul & Slab Shield and Grenadier Gauntlet. The Battle Maul & Slab Shield is an absolute beast because of its high Defence Stat. Not only can you block and push back enemies in the melee range, but you can also block ranged attacks effectively, letting you advance toward them while keeping you protected. The obvious perk that goes well with this is Block Efficiency. 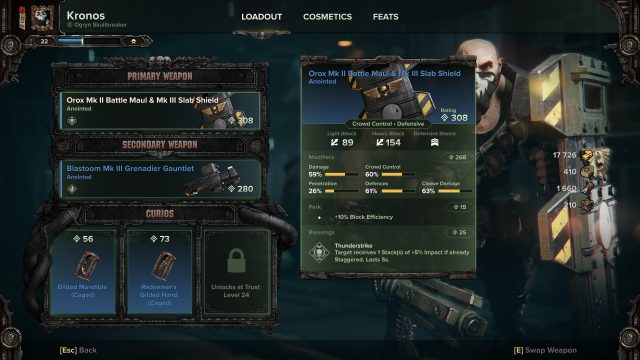 What’s more is that Stamina regenerates at a faster rate, which means your Toughness will not get depleted that easily. And if push comes to shove, you can easily whip out the Slab Shield’s Special Action to enter a Defensive Stance to withstand any damage that comes your way. Meanwhile, the Battle Maul is effective in clearing hordes due to its decent Crowd Control and Cleave Damage Stats, letting you bash their skulls to bits and pieces. 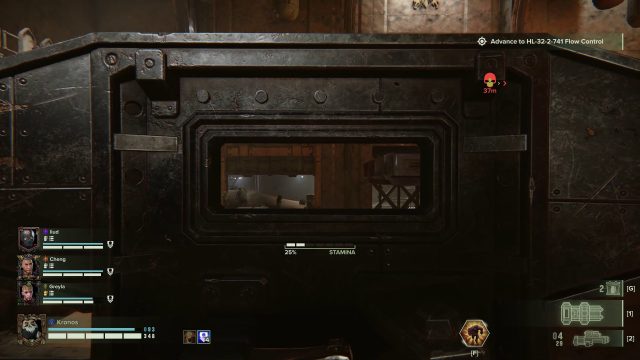 Next is the Grenadier Gauntlet, which is very effective against clusters of enemies who are far away from you when reaching newer areas. This is due to the massive AoE Blast Damage and Blast Radius of the Weapon, plus, it even staggers those who survive the explosion. You can even hit them with the Explosive Punch Special Action up close to blast their faces with a highly impactful grenade. Moreover, this versatile gun can be used to deal light and heavy attacks. For perks, you can opt to increase Grenadier Gauntlet’s ranged damage against Unarmored foes or better yet, improve the slow reload speed. 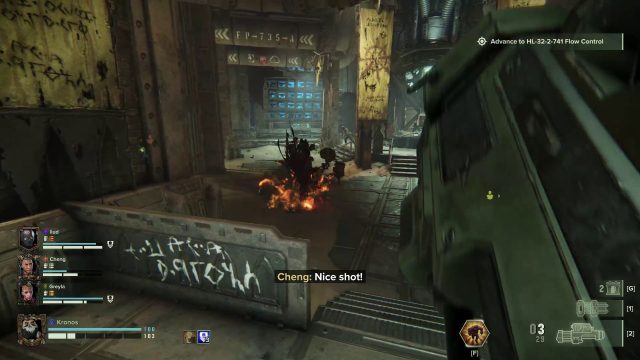 In terms of curios, you’ll need to fill up 3 slots. For the Ogryn Skullbreaker, I prefer equipping curios that’ll improve Max Health and Toughness for longer survivability. For perks, it’s good to increase your Revive Speed, especially in critical situations, plus, this goes well with your Loyal Protector Iconic Feat. The shorter time you spend rescuing allies, the longer you’ll live. Other good ones to take note of include the Toughness Regeneration Speed considering that you’ll be spending most of your time in the melee range where you’re pretty vulnerable, and Damage Resistances against Flamers, Snipers, and Gunners since they can easily lower Toughness to 0. 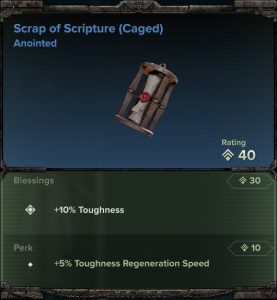 Ogryn Skullbreakers dominate in melee range in encounters because they can take damage without dying quickly. However, because of their larger physique, they can be easy targets against ranged enemies like Snipers. Thankfully, though, the Slab Shield helps to protect them briefly. Meanwhile, against elites, if you really wish to use heavy attacks, then first activating Bull Rush to knock them down is your best bet. As long as you’re not overwhelmed or surrounded by the horde, you can then follow through with several heavy attacks using your Battle Maul & Slab Shield. 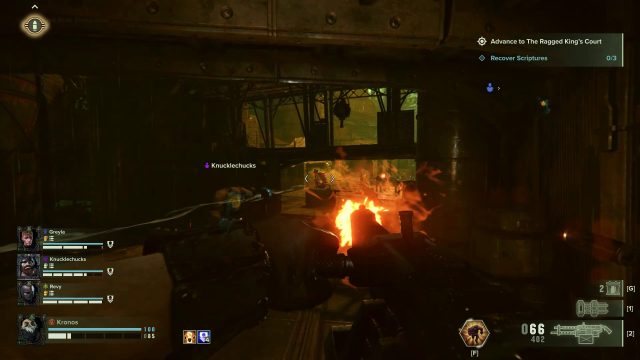 In terms of weapons, if you have another Ogryn Skullbreaker or Veteran Sharpshooter in the team, to deal Blast Damage with their Grenadier Gauntlet or Frag Grenades, respectively, then you may want to consider switching over to the Twin-Linked Heavy Stubber. Rather than damaging multiple enemies at once, you’ll be targeting elites with this ranged weapon. It’s reliable to pick off ranged targets one by one and to stagger and suppress them because of the Collateral Stat.

Lastly, you can utilize the Ogryn Skullbreaker’s size by serving as a chokepoint in narrow spaces to block incoming enemies using Defensive Stance. Doing so while pushing them back from time to time will greatly protect your team from taking damage.

Stay tuned for more Warhammer 40K: Darktide Class Guides and be sure to drop by our Twitch Channel if you have questions about the game! You can also check out our Psyker Psykinetic Class Guide, Veteran Sharpshooter Class Guide, Zealot Preacher Class Guide, Darktide Review, Darktide: What Is The Best Class For You? Guide, and Darktide: Beginner Guide.