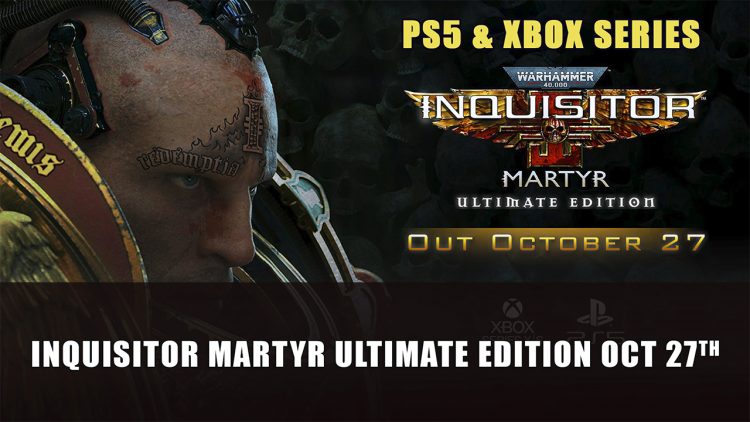 Inquisitor – Martyr the ARPG that is set in the Warhammer 40k universe released in 2018 will be heading to platforms Playstation 5 and Xbox Series X|S on October 27th.

Players will get to enjoy the diablo-esque title as they venture into the world of Imperium, set in the 41st millennium. Taking up the role as part of the Inquisition, a secret organisation that polices the realm. Choosing from classes Psyker, Crusader, Assassin and Tech-Adept to take on the proceduarlly generated missions. The extensive skill tree and wide array of weapons will be plenty to suit your favourite playstyle. Even join up in two play local co-op on consoles or up to four players in online multiplayer.

Current gen consoles will be receiving the Ultimate Edition which brings the bases game plus all DLC content released since launch. The enhanced version brings 4k native support, high-res textures, improved physics, cross-gen multiplayer, and DualSense controller support for those on PS5.

As for whether there will be an upgrade for those who already own the last-gen version, according to a recent tweet this is a separate version from the previously released console versions.

Hi! This is a separate purchase and an independent edition from previous gen versions.

For more news find it here in Wild Hearts Shows Off Its Combat And Fortnite-Style Construction In The First Gameplay Trailer and Cyberpunk 2077 Is Getting A Sequel And New Witcher Games Planned.