In this Vigil: The Longest Night Review, we’ll be discussing a new 2D Action RPG that is inspired by the likes of Castlevania and Salt & Sanctuary. Vigil was developed by Glass Heart Games and published by Another Indie. If you’re into exploration, challenging boss battles, and discovering secret areas and hidden loot, then strap yourselves in and let’s discuss a game that does all of these things pretty damn well.

In Vigil: The Longest Night, players take on the role of a newly trained Vigilant, Leila who returns to Maye Town for the birthday of her sister Daisy. As she journeys back to Maye, she meets a mysterious person called The Lantern Keeper who tells her about the Vigilant’s Trial that she must complete in order to end the ritual and the Longest Night. 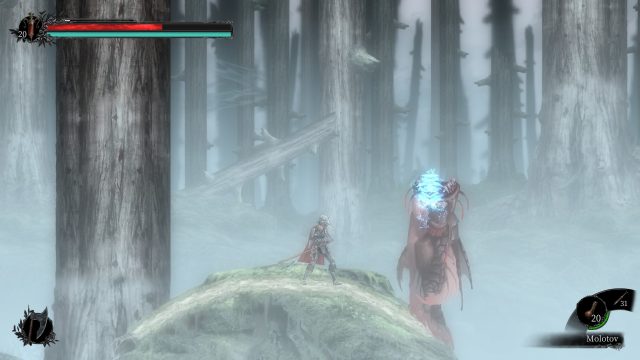 Upon Leila’s return to Maye, she learns that there is a mysterious force that is continuously spreading chaos across the town that causes monsters to appear and townspeople begin disappearing. Leila then, finds out that her sister has also gone missing, and it is up to her to solve this case and hopefully, to end the darkness. Travel across Maye, speak to the NPCs and discover multiple dimensions that will help you find the missing pieces of the puzzle and to uncover the person behind the series of  unfortunate events.

In Vigil there aren’t any voice-overs for the NPCs that you talk to, and there are literally only little and short cutscenes that are shown, which are in the beginning and the end of the game. While I think that sometimes it’s good to read dialogues (just like in classic games) instead of listening to them speaking, in 2020 players have come to expect voiced dialogue in nearly every game they play. This is definitely more of a minus than a plus, I’d say, even though it does add some nostalgia to the game.

Despite having no voice-overs during interactions with NPCs, and a lack of information and detail towards some points of the story, the setting of the game is absolutely stunning to look at. It comes off as vibrant almost, even though a large portion of the game takes place at night. Visually, it has some similar elements to Salt & Sanctuary, but Vigil: The Longest Night stands on its own because of its art style that is inspired by the art of Chinese Paper Cutting, a vibe that has a fusion of Taiwanese culture. And there is also a surprisingly amazing score created by the talented Jouni Valjakka of the metal band, Whispered. Between the visuals and music, the immersion of the game is quite impressive.

Vigil: The Longest Night is a 2D Metroidvania game that is inspired by Castlevania and Salt and Sanctuary, so when it comes to level design, expect that there are hidden paths, countless secrets, multiple locked areas or unreachable platforms, and just a whole lot of exploring to do that will force you to keep going back to certain areas to find what you missed the first time. The key to fully understanding the story of Vigil is to thoroughly explore each location, and speak to every single NPC you encounter. Apart from trying to complete your trial as a new Vigilant, you’ll be taking on quests and tasks that are given by the townsfolk of Maye. 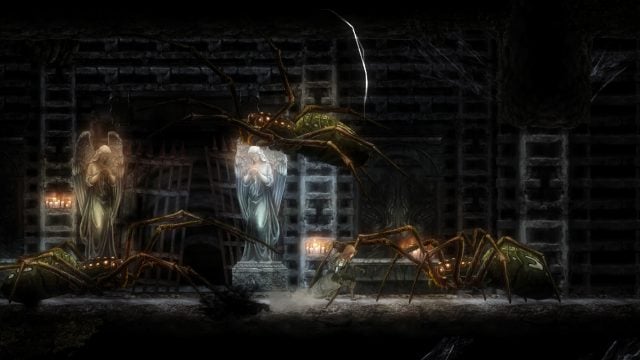 What I enjoyed most when it comes to Vigil’s level design is its hidden paths in most areas. There are just so many items that are scattered and are hidden, you really need to check each corner for gaps that you can slide under, walls that you can break, or platforms that are unreachable that require certain items and abilities to reach. The game really forces you to check each location and pushes you to make sure that you’ve pretty much cleared it. There’s also this sense of achievement when you’ve discovered a secret section of an area, or if you’ve finally found an enemy that can only be located in a specific hidden area.

When it comes to gameplay, it is heavily inspired by the combat mechanics of Salt and Sanctuary, though not identical. There are four different types of Weapons in the game: Swords, Bows, Halberds, and Daggers. Leila can equip three different weapons at once, and she can easily change these on the fly. Each weapon type is unique and they have their own special actions.

Equipping the sword allows Leila to block, parry attacks, and execute finishers. Halberds can be charged up to release a powerful attack. Bows gains access to different types of arrows like flaming and poison arrows, and Daggers grant the ability to break through an enemy’s defense. Apart from their special attacks, some weapons also have special arts, which are unique moves that are executed by pressing and following a set of buttons.

Armor in Vigil: The Longest Night is divided into five categories: Masks, Helms, Clothes, Gloves, and Boots. What excites me about the armor in the game is that not only does it provide defensive properties, but it is also a cosmetic item that changes the appearance of Leila. You might wanna grab that Bondage armor set. You’ll like it, trust me. 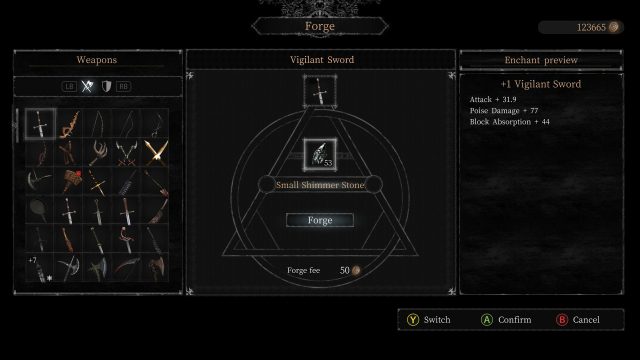 Players can also forge their Weapons and Armor by increasing its level up to +7 and by enchanting it with various effects such as resistances to elemental attacks and other buffs. Forging requires the use of Shimmer Stones and Gold, while Enchanting requires specific gems and Gold. You can forge and enchant weapons by speaking to Zachary at the Smithy in Maye Town.

When it comes to character progression, Leila gains EXP by killing enemies and defeating bosses. Each time she levels up, she gains 1 Skill Point that can be used to unlock a skill from 5 different skill trees. There is a Skill tree for each weapon type that unlocks various moves and increases its effectiveness, eventually mastering the weapon. There is also a passive skill tree for Leila that further boosts her stats such as increased HP and improved recovery rate of her Stamina. 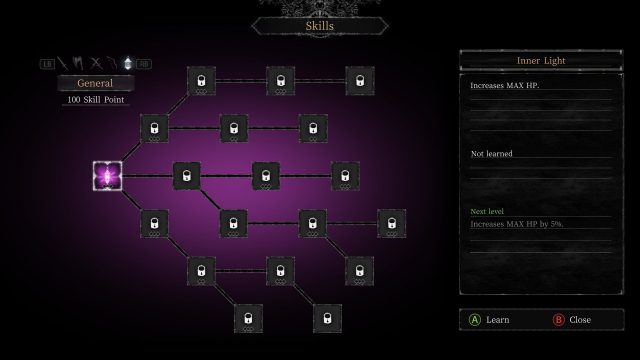 Combat is surprisingly fluid since you can execute weapon combos as you unlock certain skills or when you use your back step or roll to dodge. As fluid as the combat is, all of these combat maneuvers are restricted via Leila’s stamina (just like in Dark Souls), and your stamina depletes when you dodge and attack.

However, stamina in this game isn’t as unforgiving as some others where you become immobile if you drain your stamina. In Vigil, if you deplete your stamina bar, the color turns from blue to yellow, and instead of the bar depleting, the yellow bar starts to fill up. When the stamina bar turns yellow, Leila’s attacks do less damage and if it the yellow bar becomes full, Leila becomes exhausted and she becomes immobile as she tries to catch her breath. So you have a bit of a warning system before you are really screwed.

Boss battles are epic and challenging! The designs are beautiful and I had fun fighting each one of them. During my gameplay, I encountered a total of 15 bosses in the game, and let me be the first to tell you that you won’t be disappointed. Every single boss is different when it comes to its behavior and it pushes you to analyze its moves, figure out its weaknesses, and it also forces you to quickly change your tactics such as changing your equipment or your loadout.

An element that impressed me the most is the audio of the game. During my playthrough, I could literally hear the background music that plays in Maye Town in my head even when I had stopped playing the game for the day. The music just stuck to me. The melodramatic score that has a touch of metal fits perfectly in the world of Vigil: The Longest Night. 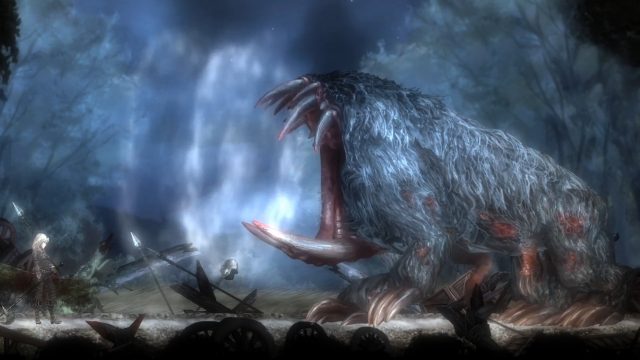 Visually, I do not have any complaints about Vigil and I am happy with its design, enemies are weirdly creepy, the Bosses are challenging and rendered perfectly, and the background is still vibrant despite having the setting of the game at night. However, apart from not having any voice over for dialogues, some written dialogues and item descriptions are still a bit… off. It’s not really a major problem, but since you will be reading A LOT in this game, you can’t help but notice some weird typos and errors in grammar.

Vigil: The Longest Night is priced at 21.99 USD which is a reasonable price considering the large amount of content that the game has to offer, and Vigil does feature NG+ for those who wish to continue playing after they finish their first playthrough. In NG+, players get to carry over all the equipment and items obtained during the first playthrough, current player level, and unlocked skills. If you’re a completionist and you’re into exploration, then you’ll have a sense of achievement for completing the game, as well as beating the game on the Hard difficulty.

Just like any Metroidvania game, expect that there are multiple endings (three to be exact), that depend heavily on your progress and actions. During my playthrough, I accumulated almost 20+ hours of gameplay, since I went back and forth to areas making sure I’d discovered secret sections, hidden loot, cleared out a location, and figured out the conditions to unlock the true ending of the game.

As a Salt & Sanctuary fan, Vigil: The Longest Night has been on our radar for quite some time since it was announced back in 2019. The mild horror and thrilling vibe that the game leans toward is what drew me to it originally, on top of the common elements that I usually look for in a 2D ARPG Metroidvania game, such as an exquisite design, a unique score, exploration, and customization. 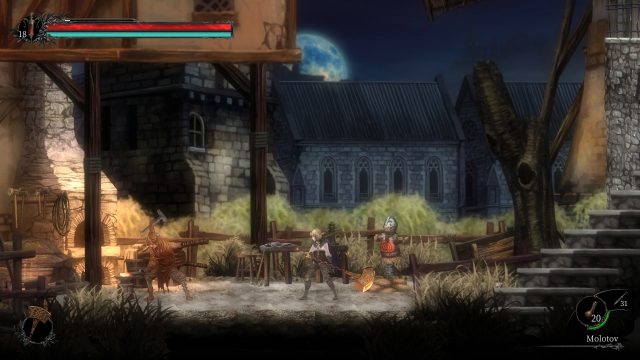 Despite having the lack of voice-overs in NPC dialogues, missing content with regards to the lore, and some minor errors in the written dialogues and descriptions, Glass Heart Games has done an excellent job in delivering a Metroidvania game that’s worth the money and your time. The pace of this game just keeps you immersed, and it continuously builds up as you reach the end. And on top of that, completionists like myself will be compelled to replay Leila’s adventure just to discover secret sections and find hidden loot. If you want to take a break from online games, if you’re itching to play a 2D Metroidvania game like Salt & Sanctuary but haven’t found one, or simply want to hop into a world that leans heavily on exploration and challenging combat, then you might want to check out Vigil: The Longest Night, you won’t be disappointed at all.

Vigil The Longest Night will be releasing for PC via Steam and Nintendo Switch on October 14th for a retail price of 21.99 USD. We’ll be streaming it on Twitch around then, and we’re already working on the Wiki for the game as well.

If you enjoyed this review be sure to check out more in Wasteland 3 Review: Baldur’s Gate Meets X-Com and Mortal Shell Review: Fortes Fortuna Adiuvat.

8.3
Summary: All in all Vigil The Longest Night is a fantastic indie 2D Action-RPG with metroidvania exploration. If you like discovering secrets, games such as Salt & Sanctuary and don't mind reading through story/dialogue, Vigil will keep you immersed in its dark fantasy world. It has great replayability with a number of weapon/skill trees to challenge at a decent pricetag.
Story & Setting (7.5)
Gameplay & Level Design (8.5)
Audio & Visual (8.5)
Replayability (8)
Pricepoint (9)