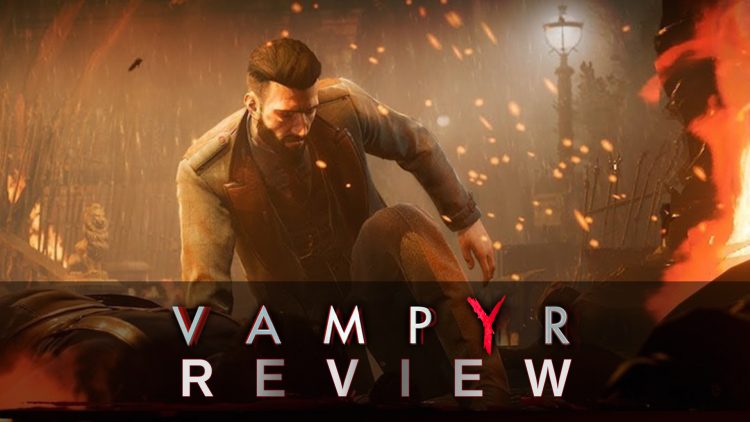 Dontnod, the French developer better known for there narrative-driven story games such as Life is Strange, takes on an ambitious new genre in the dark action RPG: Vampyr. A game that follows a newly born vampire Dr. Jonathan Reid, who is caught in a ironic struggle to survive as a vampire, but at the same time save the population of London in the 1900’s era. While the city is writhing with Spanish Flu, an epidemic has taken hold and it is up to the doctor to discover it’s less than savory secrets. Focusing on abilities and melee combat, as well as the option to use ranged weapons (such as revolvers), Vampyr is teeming with customization, but how does the actual gameplay hold up? In this review I will explore the most impressionable moments of Vampyr as well as the overall feel of the game.

Focusing on the city of London in the 1900’s, Dr. Jonathan Reid (a practitioner of modern blood transfusions), is bitten by an unknown maker. As he struggles to come to terms with his new life, he accidentally takes the life of his sister while overtaken by his lust for blood. Ridden with guilt, hunger and trepidation, he must venture across London to find answers of his new found affliction. Trying to solve the root of a sweeping epidemic, a new strain has developed, producing a mutated breed of vampires that are consumed with anger and vengeance. In a world where vampire hierarchy plays a pivotal role, whether you’re a respected Ekon of honoured bloodline or a Skal who is forced to live in the sewers, social standing and acceptance are a large part of the game. 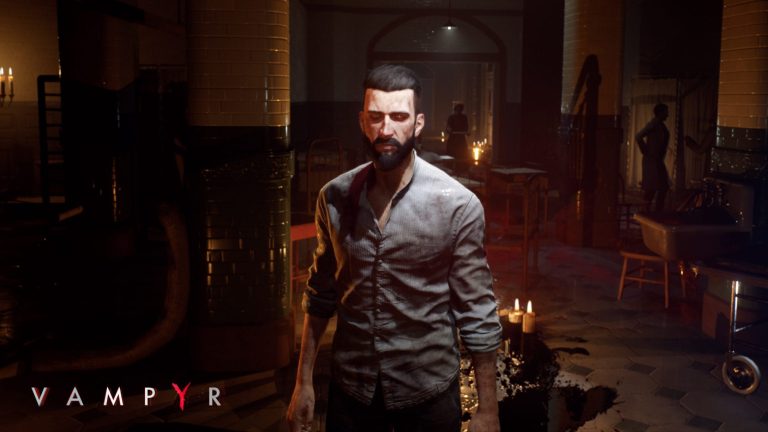 Dr. Jonathan Reid fights his affliction to uphold his oath as a doctor

While the story was rich in lore, it was interesting to find which urban legends Dontnod adopted in their story. Garlic, made famous by Bram Stoker, is to be avoided at all costs, and sunlight dramatically reduces health. The story has a strong beginning, and lore is discovered through mostly letters and journals that can be found through the game. It is understandable there is a great deal of detail when it comes to the history, but I found it a little tedious to sift through pages and pages of notes to get a clear picture of it all. Dontnod could have used variation, for example flashbacks or short clips that would help tell the narrative in a more interesting manner. And, towards the end of the game, the lore became muddled with different moments in history and generally a mishmash of vampire myth, werewolfs and magical legend. 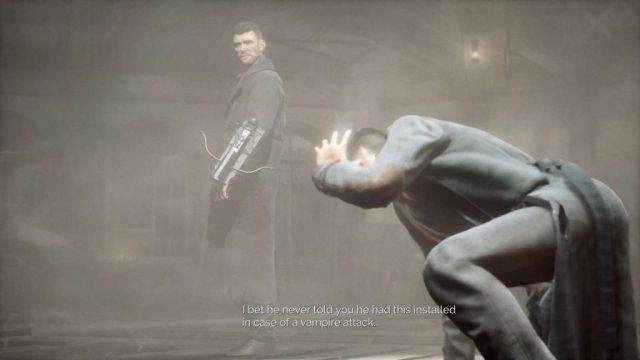 Geoffrey McCullum’s hate for vampire kind is about to change

There were definitely redeemable moments in terms of storyline, Dontnod is well known for their difficult choices after all, and consequence do impact the game. The decisions that noticeably changed outcomes in Vampyr were the moments where you could choose to kill or make a newly born vampire. These are not to be made lightly and negative outcomes seem to be completely unavoidable in a “damned if you, damned if you don’t” context. One of my favorite choices was to commit the ultimate revenge on the vampire hunter Geoffrey McCullum who had been out to get Dr. Reid since the beginning of the game, popping up at the most crucial moments and being downright disrespectful to vampire kind. After an interesting boss fight where UV light caused health reduction, McCullum is defeated and inches away from death. Choices given were to take his life or to turn him into my very first progeny, choosing the latter he begs for the sweet release of death only to be sentenced to an eternity of the undead. What better revenge is there but to turn him into the very things he despised?

There are two clear ways to play Vampyr. I started off trying out the “Pacifist” way, which involved not feeding on anyone and trying to fight my way through the mobs. It became painfully clear this was more of a hard-mode, as the only way to level your skills or increase your stats in a progressive manner was too kill off the innocent characters. After realizing how challenging it would be to level and complete the main quests to progress the story line I switched to a more violent route. As much as I appreciate the that Dontnod offered a way to make the game more challenging, without introducing mode difficulty at the beginning of the game, it’s severely punishing and not the most enjoyable way to play. 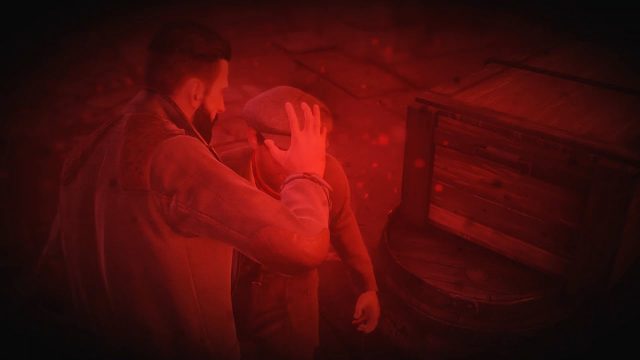 Mesmerise victims in order to drink their blood

If you were expecting Vampyr to be a completely thrill-ride action focused game, you would been half right. While the main protagonist is a doctor, you will find that a good portion of your time will be spent playing detective. Only through conversations with different NPCs will you find information about other characters in the story,  and will lead to actions that can be unlocked later on. An example of this was the three choices given for the situation with Aloysius Dawson, a bitter man who’s life’s ambition is to separate the rich and the poor with a wall surrounding London. In the scene where you are supposed to make him your progeny, there are actually three choices to choose from, but the third is only unlocked if you have spent the time talking to NPCs in the area. The choices were pretty crucial as you could either choose to turn him (loosing XP in the process), let him die naturally or kill him. Each had a different outcome to the story, I chose to kill him off and in turn the whole district died. 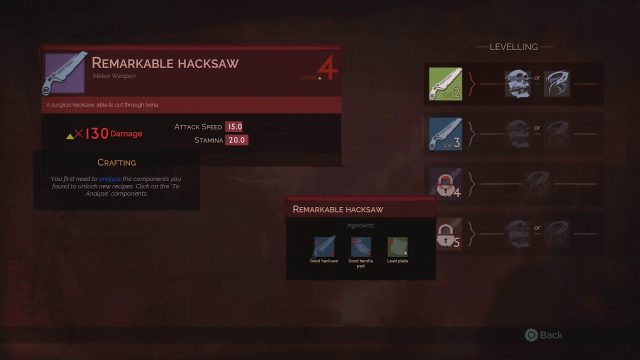 Combat gave an array of weapons to choose from, depending on your preferred playstyle, two-handed, single-handed or use of abilities are all at your disposal. You could use off-hand weapons such as revolvers to shoot at mobs/bosses from a distance with auto-lock assuring a 100% hit rate or have at it with two-handed melee weapons that deal a satisfying amount of damage once you level them by crafting. Choice is probably the only positive here as the overall feel of combat was a little all-over place. Certain melee hits would make contact in a timely manner, while others would feel out of range and awkward. Abilities heavily rely on your blood bar, typically a mana bar in other RPGs. If you are low on blood, you need to stun enemies using a blunt weapon and bite them for a quick refill as it does not regenerate on it’s own like stamina does. 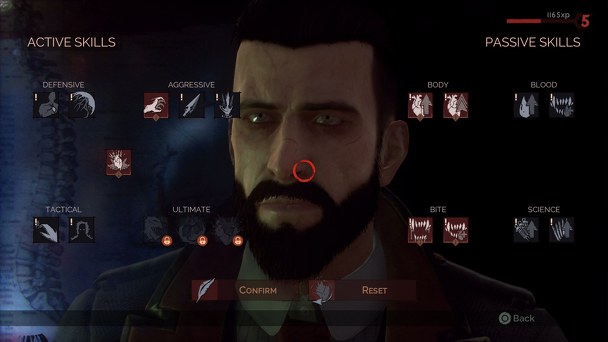 A variety of skills to choose from

Skill trees were pretty straight forward, using XP gained from fights or feeding on the innocent NPCs. Your bulk of XP is gained unfortunately from killing off NPCs, so if you’re going down the pacifist route you will have to choose your upgrades very wisely. Ultimates were probably my favourite feature when it came to abilities which deal the most damage when it comes to boss fights. Each boss came with own set of abilities and mechanics to overcome, making each fight quite different in terms of tactics.

Dontnod did well to recreate a dark, and gloomy London in a time of epidemic. Wandering down streets and alley ways gave the feeling of discovery, revealing new districts and side-quests along the way. The overall setting fitted the mood with derelict safe houses and manors of grandeur showing a stark contrast between rich and poor.  It’s shame that the characters did not get the must needed detail they deserved, expressions were minimal and emotionless in scenes where conversations took place. Mutated vampires however were pretty graphic and were a mixture of horror and imagination. 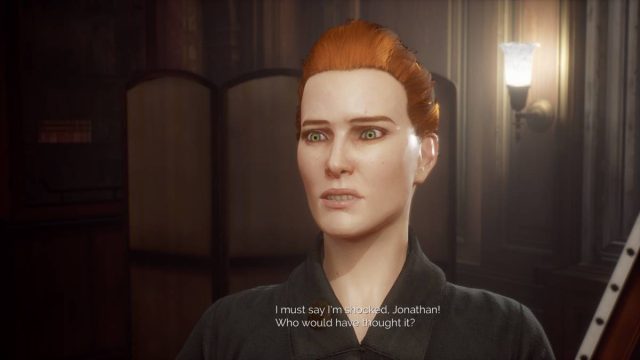 Would you call this a shocked face?

There isn’t much colour when it comes to visuals in this game as the story depicts a dreary London, the only time where a real color contrast makes it’s appearance is using your vampire senses to pick up on heart beats and blood trails. The developers use a couple of ways to tell the story, one way is through a noir styled comic which shares some cut scenes. This was a refreshing occurrence that helped to explain some of the vital narrative in the game but was used only on a few occasions. 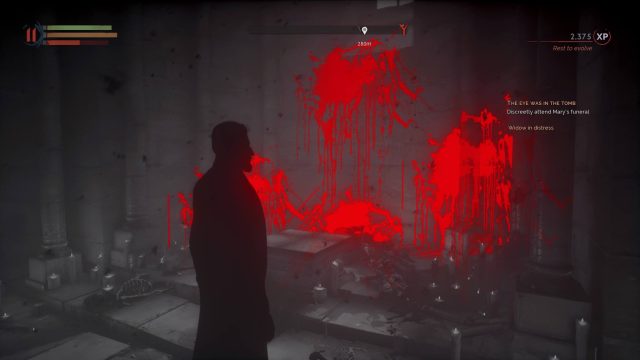 The camera angles were a little stagnant in places, if you started a conversation with some NPCs from behind, the conversation would actually carry out with their back to you. Other scenes where you are bitten by other vampires in fights would cause the camera angle to pan away, meaning you couldn’t shift the angle to see how you can react with your next move. 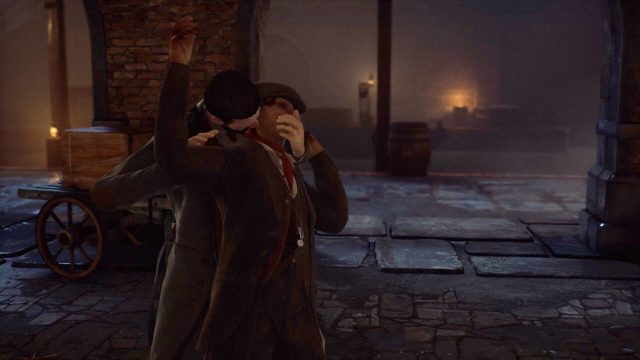 The soundtrack was suited, with a choir chiming in everytime you killed off someone, as if to say “we see what you’re doing” giving the event more an impact and drama. The music would change up between districts and certain events which complement the overall aesthetic of the game. The voice acting was good but nothing out of the ordinary, each voice actor did a decent job in giving life to their characters.

While the project is the first in it’s kind to come out from Dontnod, and I feel this one was just a stepping stone for their future games. As a company known for their impressive narrative style, it felt a little muddled with trying to incorporate a lot of myths and conspiracies into one story. There are definitely enjoyable moments in the game, the choice of weapons and abilities was a nice touch, and Dontnod has approached this vampire game in quite a unique way, putting their own spin on the RPG genre.

While Dontnod makes is very clear that actions have dire consequences in story, I found that it killed the overall feel of the game in the process. Offing a few NPCs in one district can cause the whole area to die, meaning even if you didn’t bite everyone, the area becomes abandoned and empty. Since I chose the most fun path (in my opinion) of wreaking havoc and killing anyone with a good amount of XP, many of the districts died meaning running through London became a bit monotonous with only random Skals/hunters to kill off now and again. Side quests became non-existent due to NPCs not being alive to carry them out, which was a shame. 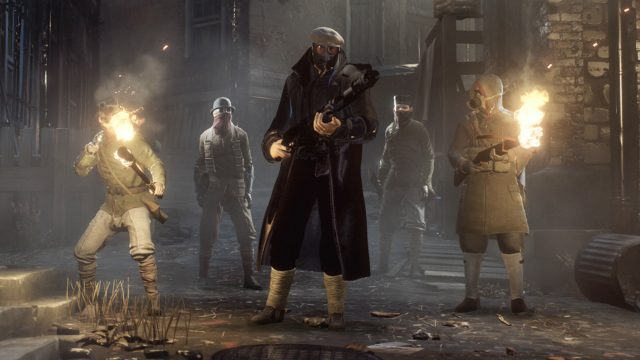 Vampire hunters are ready to take you out

There is a certain replay-ability with this game, choosing a more hardcore mode by going down the pacifist route (while not the most balanced approach), if you’re looking for a challenge you will find it here. You could probably play this a couple more times in order to unlock all options in the story, as well as collect all weapons in the game. However, once you get through it once, you probably will find that will be it for your vampire adventure. I definitely look forward to more Dontnod games, while this one was enjoyable in some parts, if you’re looking for a game that has a good combat mechanics you might want to steer clear of this one.

If your enjoyed reading about Vampyr be sure to read the Vampyr: All Collectibles & Weapons Guide and Vampyr Trophy Guide And Roadmap. We also have some more RPG game reviews such as Dark Souls Remastered Review: Nostalgia In 4K and Review – Ni No Kuni II: Revenant Kingdom.