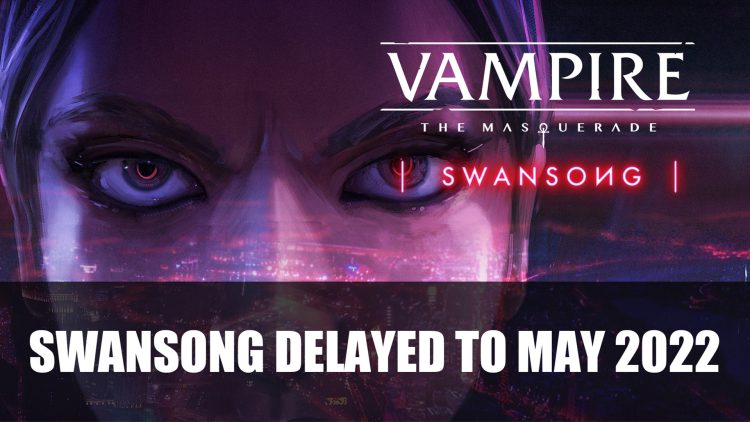 Publisher Nacon and developer Big Bad Wolf Studio have announced the delay of Vampire: The Masquerade – Swansong from their previous February 2022 launch window, now to May 19th, 2022.

Vampire: The Masquerade – Swansong The Narrative RPG Now Delayed to May 2022

Vampire The Masquerade – Swansong the RPG based on the tabletop game, has now been delayed to May 2022. Previously set to launch in February 2022, the game has been announced by developer Big Bad Wolf Studio to have been pushed by a few months.

The message shared by Nacon revealed that the developer needs more time to “focus on crafting the world that draws you in”. The statement goes on to say that while the decision was not an easy one to make, it is in mind of a “healthy work-life balance” for the team involved.

Time crunches for studios are not uncommon, especially when there is a lead-up to a launch. Deciding to push launch dates has not been uncommon this year, being prevalent amongst developers in the industry. Studios such as Square Enix with Final Fantasy XIV pushing their initial release date for the upcoming expansion Endwalker, as well as most recently Action-RPG Thymesia being released in 2022 instead of this year, and Marvel’s Midnight Suns being pushed to late 2022. Developing titles under different circumstances have thrown development schedules off for many.

An important announcement regarding the release date of Vampire: The Masquerade – Swansong. 🖤 pic.twitter.com/8V7JStdRok

Previously it was announced back in July that Vampire: The Masquerade – Swansong had been delayed to next year February. A new trailer was released featuring the character Galeb, an older vampire who seems to be able to use mind control on his victims.

Swansong was announced at PDXCon in 2019, as a narrative-driven RPG set in the Vampire: The Masquerade universe. It is being developed by Big Bad Wolf who released titles such as The Council, an episodic story-driven game with puzzles.

Recently another Vampire: The Masquerade title, Bloodlines 2 also got a brief update. Paradox Entertainment shared they are “happy” with the current progress of the game under a new mystery developer.

Vampire: The Masquerade – Swansong will now release for Playstation 5, Xbox Series X, Playstation 4, Xbox One, Switch and PC via the Epic Games Store in May 2022.